Hepatocellular carcinoma (HCC) is the most common primary malignant tumor of the liver. Although progress in diagnosis and treatment of hepatic carcinoma has been made in recent years, its prognosis is still poor. Exploring new materials for treatment and investigating the mechanism are important. With the development of nanometer technology, hydroxyapatite nanoparticle, a novel inorganic material, was found to be able to inhibit tumor cell proliferation. However, there was yet no report about the effects of hydroxyapatite nanoparticles on the growth and apoptosis of human hepatoma cell line BEL-7402. Therefore, the present study was designed to study the inhibitory effect of hydroxyapatite nanoparticles on human hepatoma cells and its mechanism to provide a theoretical basis for its clinical use.

Hydroxyapatite nanoparticles were obtained from Institute of Biomaterials, East China University of Science and Technology. Stock solution was made at the concentration of 400 mg/L with RPMI 1640 and diluted to working concentration before use. RPMI 1640, fetal calf serum (FCS) and MTT were purchased from GIBCO. RNase, proteinase K, propidium iodide (PI) and Hoechst 33258 were products of Sigma Chemical Co.

Human hepatoma BEL-7402 cells were provided by China Center for Type Culture Collection of Wuhan University (CCTCC). The cells were grown as monolayers in RPMI1640 medium supplemented with 10% heat-inactived fetal calf serum and incubated in humidified incubator with 5% CO2 in air at 37 °C.

MTT[3-(4,5-dimethythiazoyl-2-yl)2,5-diphenylte-trozoliumbromide] colorimetric analysis was used to measure the cytocide rate of HAP nanoparticles. Well-growing BEL-7402 cells were collected and seeded in 96-well plates at 1 × 105/mL density 100 μl cell suspension per well. When the cells anchored to the plates, the culture medium was replaced with fresh medium containing various concentrations of HAP nanoparticles (0, 12.5, 25, 50, 75, 100, 150 and 200 mg/L). Eight duplicate wells were set up in each sample. After incubated at 37 °C, 5% CO2 for 48 h, 5 g/L MTT 20 μl was added to each well and cultured for another 4 h. The MTT medium was discarded and warm dimethylsulfoxide (DMSO) 200 μl was added. Absorbance was measured at 490 nm. Cellular proliferation inhibition rate (CPIR) was calculated using the following formula: CPIR = (1 - average A value of experimental group/average A value of control group) × 100%.

Cells treated with 50, 75, 100, 150 and 200 mg/L HAP nanoparticles for 48 h were harvested and fixed with 1:3 glacial acetic acid/methanol twice, first for 5 min and then for 10 min and washed with phosphate buffer solution (PBS). Cells were resuspended in Hoechst 33258 solution (Hoechst 33258 dissolved in PBS, 5 mg/L) and incubated at room temperature for 45 min in the dark. Aliquots of 100 μL/mL were placed on a glass slide and observed under an Olympus BH-2 fluorescence microscope after dried thoroughly.

The BEL-7402 cells were seeded in culture flasks. Three culture bottles were divided into treatment group and control group. When the cells anchored to the plates, various concentrations (0, 50 and 100 mg/L) of HAP nanoparticles were added and the cells were incubated at 37 °C, 5% CO2 for 48 h. Hepatoma cells were then digested by 0.25% trypsinase and collected. After rinsed with PBS, the cells were prefixed with 3% glutaraldehyde for 30 min, post-fixed with 1% osmic acid, dehydrated in graded ethanol, embedded in Epon 812 mixture, and cut into sections on an ultramicrotome. The cells were observed under Hitachi H-600 electron microscopy.

The suspended single cell solutions subjected to treatment with HAP nanoparticles at different concentrations (0, 50, 75, 100, 150 and 200 mg/L) for 48 h were harvested. Each group had three culture bottles. Cells were washed with PBS, fixed with 70% ethanol at -20 °C for 30 min and stored at 4 °C overnight, then washed with PBS again, treated with 100 mg/L RNase 100 μL at 37 °C for 30 min and stained with 50 mg/L PI 100 μL at 4 °C for 30 min in darkness. Apoptotic cells were assayed using FACSort Becton Dickinson Flow Cytometer at 488nm and data were analyzed with CELLQuest Software. For each sample, 6000 cells were measured.

Hoechst 33258 is a specific DNA-binding fluorochrome and under the fluorescence microscope it exhibits a green fluorescence. As shown in Figure 1, in the control group, the nucleus was big and round, with a smooth nuclear membrane, free of condensation and fragmentation. However, smaller nuclei, increased density of nuclear chromatin, fragmentation of nucleus and apoptotic body formation were easily identified in HAP nanoparticles treated groups. The higher the concentration of HAP nanoparticles, the more apoptotic cells there were. Apoptotic rate was counted under fluorescence microscopy, there were 18.68%, 22.27%, 33.49%, 49.03%, 57.16% at 50, 75, 100, 150 and 200 mg/L concentration, respectively.

Under transmission electron microscopy, control cells were big and round, with intact nuclear membrane and low density in nuclear chromatin (Figure 2A). However, the cells treated with HAP nanoparticles exhibited characteristics of apoptosis including cell membrane shrinkage, cytoplasm budding, condensation and fragmentation of nuclear chromatin adjacent to nuclear membrane (Figure 2B). 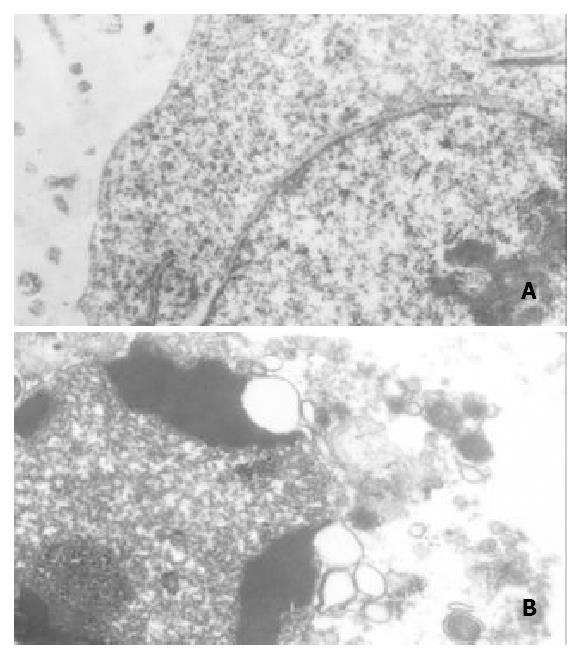 Hydroxyapatite nanoparticles used in this study was synthesized by sol-gel method, with uniform particle size of 50 nm and was well dispread. After human hepatoma BEL-7402 cells treated at various concentrations of hydroxyapatite nanoparticles for 48 h, MTT colorimetric analysis showed that nanoparticles could significantly inhibit the proliferation of BEL-7402 cells, with IC50 values of 29.30 mg/L. Moreover, the inhibitory rates at 25, 50, 75 and 100 mg/L concentration of HAP nanoparticles were all more than 50%, but there was no statistical difference among the four treatment groups, which indicated the tolerance of human hepatoma BEL-7402 cells subjected to HAP nanoparticles. This would provide some experimental basis for its clinical use.

With cytochemical staining and under transmission electron microscopy, typical apoptotic alterations such as cells shrinkage, nuclear chromatin condensation and fragmentation, cytoplasmic budding and formation of apoptotic bodies were observed after BEL-7402 cells were treated by HAP nanoparticles for 48 h. Quantified by FCM, the higher the concentration of HAP nanoparticles, the more apoptotic cells there were. The apoptotic rates were in accordance with the results counted under fluorescence microscopy. At the same time, no statistical difference was found among the 50, 75 and 100 mg/L groups, in which the tolerance of BEL-7402 cells subjected to HAP nanoparticles was identified. Therefore, the present study demonstrated that HAP nanoparticles could induce human hepatoma cell apoptosis in vitro. This might be the first report regarding the antineoploastic mechanism of HAP nanoparticles on human hepatoma cells through apoptotic induction.

Kerr et al[1-19] first described the concept of apoptosis. It is the programmed death of cells by fragmentation of DNA, cell shrinkage, followed by cell fragmentation and formation of membrane vesicles called apoptosis bodies. A variety of studies have revealed that the uncontrolled growth of neoplasm is not only due to the over proliferation but also due to the loss of natural apoptosis. Therefore, exploring new medicine that could induce cancer cell apoptosis would be helpful for neoplasm treatment[20-23]. To date, chemotherapeutic medicines, growth inhibitor analogs, arsenic and various Chinese herbal medicines have been testified to suppress tumor cell growth by inducing cell apoptosis[24-38].