AIM: To investigate the expression of RhoC gene in hepatocellular carcinoma (HCC) and to evaluate the relationship between RhoC gene expression and invasion and metastasis of HCC.

RESULTS: The mRNA expression levels of RhoC in tumor tissues were significantly higher than those in para-cancerous normal liver tissues (1.8 ± 1.1 vs 1.0 ± 0.7, P < 0.01). The metastatic lesions outside of liver also showed significantly higher RhoC mRNA levels than corresponding tumor tissues in liver (3.3 ± 0.5 vs 2.0 ± 0.7, P < 0.01). There were significant associations between RhoC gene expression and certain clinical and pathological findings, including cell differentiation, vein invasion, number of tumor nodes and metastatic lesions. Mutation of RhoC gene was not found by PCR-SSCP.

CONCLUSION: The RhoC gene may be related to malignant transformation and development of HCC and may play an important role in the invasion and metastasis of HCC by overexpression but not mutation.

Hepatocellular carcinoma (HCC) is one of the most common malignancies in the world, and is the second-leading cause of cancer death among males in China[1]. It is generally accepted that the high incidence of recurrence and metastasis is the most crucial prognostic factor for patients with HCC[2]. Transcellular migration of tumor cells through host structures, such as endothelium of blood vessels and methothelium of visceral cavity is crucial in cancer invasion and metastasis[3].

RhoC GTPase is a member of Ras-superfamily of small guanosine triphosphatases (GTPases), which shuttles between an inactive GDP-bound state and an active GTP-bound state and exhibits intrinsic GTPase activities[4]. Activation of Rho protein leads to assembly of the actin-myosin contractile filaments into focal adhesion complexes that lead to cell polarity and facilitate motility[5]. Recently, emerging data have suggested that RhoC gene play important roles in tumorigenesis and metastasis of tumor cell[6]. The expression level of RhoC in metastatic regions of pancreas cancer has been reported to be higher than that in primary lesion[7]. Genome-wide analysis of gene expression has revealed that RhoC gene was involved in vascular invasiveness of hepatocellular carcinoma[8]. We hypothesized that RhoC might play a critical role in tumorigenesis and invasion and metastasis of HCC. In the present study, we investigated the expression of RhoC gene in HCC and evaluated the relationship between RhoC gene expression and clinical and pathological characteristics of HCC.

Twenty-five fresh HCC specimens and corresponding para-cancerous normal liver tissues were obtained by surgical resection in Xiangya Hospital between March 2002 and August 2002. Further more, four cases of corresponding metastatic lesions or hepatic vein tumor thrombosis were obtained as well. The patients with HCC were consisted of 22 men and 3 women and were ranged from 28 to 73 (mean ± SD = 53). We divided the 25 patients from six aspects: tumor < 5 cm in diameter 7 cases and ≥ 5 cm 18 cases, I-II in cell differentiation 9 cases and III-IV 16 cases; the number of tumor nodes ≥ 2 15 cases and < 2 10 cases, with capsule formation 12 cases and without it 13 cases, with microscopy portal vein tumor thrombosis 13 cases and without it 12 cases, with metastatic nodes outside of liver 5 cases and without it 20 cases. All specimens were examined under a microscope after haematoxylin and eosin (H&E) staining.

Total RNA was isolated using Trizol reagent (GIBCO BRL, USA) and cDNA was synthesized from the RNA by M-MLV reverse transcriptase (Promega, USA) with oligodT primers (Sangon Technology, CHINA), The primer sequences of RhoC and β2-microglobulin which was used as an internal quantitative control for the amplification were as follows: the upstream primers of RhoC and β2-microglobulin were 5’-TCCTCATCGTCTTCAGCAAG-3’ and 5’-ACCCCCACTGAAAAAG ATGA-3’, the downstream primers of RhoC and β2-microglobulin were 5’-CTGCAATCCGAAAGAAGCTG-3’ and 5’-ATCTTCAAACCTCCATGATG-3’. The condition of PCR was as follows: 32 cycles of denaturing at 94 °C for 40 s, annealing at 56 °C for 30 s and extending at 72 °C for 1 min. The bands representing amplified products were analyzed by Stratagene Eagle-eye scanner. RhoC gene expression was presented by the relative yield of PCR product from target sequence to that from β2-microglobulin gene.

Because RhoC is homologous with ras gene and mutation of ras is frequent in HCC, PCR-SSCP-sliver staining analysis was performed to determine gene mutation of RhoC. We examined exon I of RhoC. The primers were designed as follows: upstream 5’-CTGCAATCCGAAAGAAGCTG-3’ and downstream 5’-CTGCAATCCGAAAGAAGCTG-3’. PCR reaction was performed by denaturing at 94 °C for 40 s, annealing at 55 °C for 30 s and extending at 72 °C for 1 min for 35 cycles. PCR samples were denatured at 99 °C for 10 min and electrophoresed with 8% non-denaturing polyacrylamide gel at 40v for 5 hours. After electrophoresis, the gel was fixed in 10% alcohol for 10 min, washed twice with distilled water for 2 min, silver reaction was performed (silver nitrate 1 g, topped up with distilled water to 500 mL) for 10 min, then washed with distilled water for 30 s, finally the gel was developed (sodium hydroxide 3.75 g, formaldehyde 2.7 mL, topped up with distilled water to 500 mL) for 10 min.

The results of RT-PCR were statistically analyzed using the Student’s t test. Fisher’s exact test was used to determine the relationship between RhoC expression and clinical and pathological characteristics of HCC. A value of P < 0.05 was considered statistically significant.

RhoC gene was expressed in HCC tissues and para-cancerous normal liver tissues of all the 25 cases. There were significant differences in the expression level of RhoC gene between carcinoma tissues and para-cancerous normal liver tissues (mean ± SD, 1.8 ± 1.1 vs 1.0 ± 0.7 respectively) (Figure 1). Metastatic lesions or hepatic vein tumor thrombosis showed significantly higher RhoC mRNA levels than primary carcinoma tissues (mean ± SD, 3.3 ± 0.5 vs 1.8 ± 1.1 respectively). Based on the ratio of RhoC expression in tumor to corresponding para-cancerous normal liver tissues (Xt/Xp = 1.8), the 25 patients were divided into two groups: overexpression group (14 cases) and high-expression group (11 cases). Fisher’s exact test analysis demonstrated a significant difference in some aspects between the two groups (P < 0.05) including cell differentiation, vein invasion, number of tumor nodes and metastatic lesions. The difference in vein invasion between the two groups was statistically significant (P < 0.01) (Table 1). Mutation of RhoC was not found in all cases of HCC. 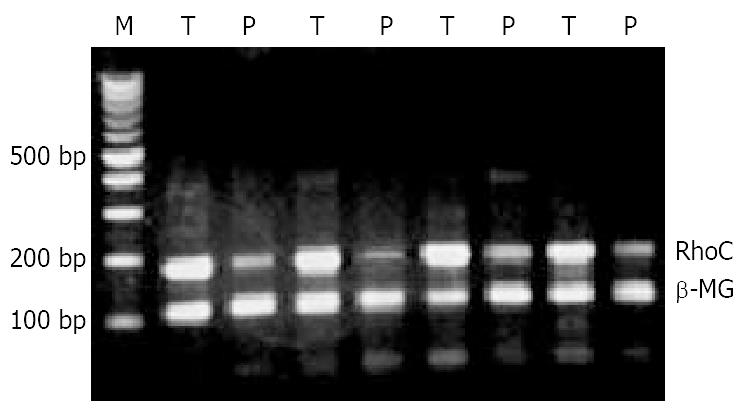 RhoGTPases are members of the ras superfamily of GTP-binding protein, which act as molecular switches, cycling between an active GTP-bound and inactive GDP-bound states. Eighteen members have been identified and the most extensively characterized members are Rho, Rac and cdc42[5]. Early studies showed that Rho protein regulated cell morphology and actin cytoskeleton, however it is now clear that they also affect gene expression, cell proliferation and cell survival[9]. Emerging data have showed that RhoGTPases are more important for the evolution of cancer than initially thought, and several reports indicated that RhoGTPases directly participated in the evolution of cancer. For instance, activated Rho protein mutants were capable of transforming fibroblast and dominant inhibitory mutants of Rho protein blocked transformation by ras[10]. Furthermore, Rho protein could upregulate cyclinD1 and downregulate CDKIS through ETS, AP-1 and NF-KB[11-19]. These indicate that Rho protein is important in tumorigenesis. RhoC is a member of Rho family and it has been shown that overexpression of RhoC induce the malignant transformation of immortalized human mammary epithelial cells. RhoC is overexpressed in pancreatic ductal adenocarcinoma and inflammatory breast cancer[7,20]. Furthermore, there is a causal link between RhoC overexpression and inflammatory breast cancer. Based on these results, we hypothesized that RhoC might be involved in tumorigenesis of HCC. We detected the expression level of RhoC mRNA in 25 patients with HCC by RT-PCR. Our results showed that RhoC gene expression was significantly higher in tumor portion than that in corresponding para-cancerous normal liver tissues. Furthermore, we also found that tumor with RhoC overexpression appeared poorer in cell differentiation than those with high-expression of RhoC gene. These suggest that overexpression of RhoC gene is related to the degree of differentiation of HCC and RhoC expression level could be a useful prognostic indicator.

Metastasis and invasion of HCC were a multistep process, and the molecular and cellular mechanisms of which were not fully understood, although cell motility has been shown to play a pivotal role in metastasis and invasion of HCC[21]. RhoC is involved in cytoskeletal reorganization, specifically in the formation of actin stress fibers and focal adhesion contacts[22]. Numerous in vitro studies have indicated that RhoC protein and its effector ROCK are clearly implicated in vivo models of tumor-cell dissemination[23]. Overexpression of RhoC gene was found in metastatic lesions of inflammatory breast cancer and pancreatic ductal adenocarcinoma. RhoC gene was also found to be correlated with vascular invasion and tumor differentiation in human HCC by using cDNA microarray[8]. In the present study metastatic lesions or hepatic vein tumor thrombosis showed significantly higher RhoC mRNA level than primary carcinoma tissues. Expression level of RhoC gene was correlated with vein invasion, number of tumor nodes and metastatic lesions. Especially, the difference between two groups in microscopy hepatic vein tumor thrombosis indicated greater significance. These results indicate that RhoC has a close relationship with invasion and metastasis of HCC. The possible reasons may be as follows: (1) Disruption of cell polarity, which plays an important role in the epithelial-mesenchymal transformation that is observed in more aggressive tumors[24,25]. (2) Contribution to the loss of adherens junctions[26-28]. (3) Increase of motility and ability to remodel ECM, which requires tumor cells to become locally invasive[29-32]. However, the exact mechanisms need to be explored further.

Given the results that RhoC protein is important in determining the behavior of cancer cells, it is surprising that mutants of RhoC-analogous of oncogenic ras have not been found in our research. Similar results were observed in pancreatic ductal adenocarcinoma[7]. In fact, several lines of evidence indicate that not mutation but the switch of Rho protein between GTP- and GDP-bound states are important in the transformation of malignant tumor[33]. Overexpression level of RhoC may contribute to a faster GTP-GDP cycling station. Taken together, our findings indicate that RhoCGTPase is related to tumorigenesis of HCC. Overexpression but not mutation of RhoC may enhance the invasion and metastasis of HCC. The molecular basis for overexpression of RhoC remains to be elucidated. What are the most important factors regulating the expression level of RhoC and how does RhoC gene regulate effector protein will be the subject of our future studies. When upstream and downstream signaling pathways are explored, these findings will provide new potential targets for the prognostication or prevention of invasion and metastasis of HCC[34].

We are grateful to Fa-Qing Tang, Jian-Qing Yang, and He-Li Liu for their technical advice and Min-Juan Lin for her statistical support.