AIM: To investigate the effect of c9,t11-conjugated linoleic acid (c9,t11-CLA) on the invasion of human gastric carcinoma cell line and its possible mechanism of preventing metastasis.

METHODS: Using reconstituted basement membrane invasion, chemotaxis, adhesion, PAGE substrate zymography and RT-PCR assays, we analyzed the abilities of invasion, direct migration, adhesion of intracellular matrix, as well as the activity of type IV collagenase and expression of tissue inhibitor of metalloproteinase (TIMP)-1 and TIMP-2 mRNA in SGC-7901 cells which were treated with gradually increased concentrations (25, 50, 100 and 200 μmol/L) of c9,t11-CLA for 24 h.

CONCLUSION: c9,t11-CLA can inhibit the invasion of SGC-7901 cells at multiple procedures in tumor metastasis cascade, which may be associated with the induction of TIMP-1 and TIMP-2 mRNA expression.

Conjugated linoleic acid (CLA) refers to a class of positional and geometrical isomers of linoleic acid (18:2) with conjugated double bonds. The conjugated double bonds are mainly located at sites 9 and 11 or 10 and 12, and each double bond may be in the cis or trans configuration[1-5]. CLA exists in dairy products and meat of ruminants, the former is the principal source of CLA, of which c9,t11-CLA is the major isomer and represents 85%-90% of total CLA in bovine milk[1]. CLA is mainly produced from linoleic acid by rumen bacteria during biohydrogenation[6], although CLA can also be synthesized in non-ruminants by △9-desaturase from trans-1118:1, another intermediate in rumen biohydrogenation[7]. The level of CLA in human adipose tissue has been reported to be associated with the consumption of dairy fat[8]. Besides, CLA can be synthesized in the laboratory and commercially synthesized CLA is available as a dietary supplement and has been shown to be non-toxic[9].

CLA is a potent cancer preventive agent and has chemoprotective properties[10-20]. In animal models of chemical carcinogenesis, CLA has been shown to inhibit skin papillomas[10,11], forestomach neoplasia[12,13] and mammary tumors[14-20]. Several studies[21-28] suggest that CLA is cytostatic and cytotoxic to a variety of human cancer cells, including hepatoma, malignant melanoma, colorectal cancer, breast carcinomas, and gastric cancer cells. Moreover, CLA also plays a role in reducing the tumor size and inhibiting the metastasis of transplanted human breast cancer cells and prostate cancer cells in SCID mice[29,30].

c9,t11-CLA with 98% purity, was obtained from Dr. Rui-Hai Liu (Food Science and Toxicology, Department of Food Science, Cornell University, Ithaca, NY, USA). It was dissolved in ethanol and then diluted to the following concentrations: 25 μmol/L, 50 μmol/L, 100 μmol/L and 200 μmol/L, respectively.

In vitro invasion assay Invasion assay assessing the ability of cells to invade a synthetic basement membrane was performed in transwell chambers (Costar Co. USA) with a polycarbonate filter of 8.0 μm pore size, separating the upper and lower chambers. The top surface of the polycarbonate filter was coated with Matrigel, the bottom with fibronectin. SGC-7901 cells (2 × 105) treated with different concentration of c9,t11-CLA (25, 50, 100, and 200 μmol/L) for 24 h were added to the upper transwell chamber in 100 μL of serum-free RPMI 1640 medium containing 0.1% bovine serum albumin (BSA, Gibco Co.) and 600 μL of serum-free BSA-RPMI 1640 medium was added to the lower chamber. After 4 h, the filters were fixed in methanol and stained with hematoxylin and eosin (HE). The noninvading cells on the top surface of the filter membrane were removed with a cotton swab. Cells on the bottom surface of the filter were counted and the cell means were obtained from five high-power fields under a light microscope. The inhibitory rate (IR) was calculated as follows:

Chemotaxied-motion assay The assay also was performed in transwell chambers (Costar Co. USA) with a polycarbonate filter of 8.0 μm pore size separating the upper and lower chambers. The bottom surface of filter was coated with fibronectin. The lower chambers were filled with 600 μL of serum-free BSA-RPMI 1640 medium. SGC-7901 cells (2 × 105) treated with different concentrations of c9,t11-CLA (25, 50, 100, and 200 μmol·L-1) for 24 h were added to the upper chambers, the chambers then were treated the same as invasion assay. SGC-7901 cells that migrated from the upper chamber to the bottom surface of the filter were counted and the means of cell numbers from five high-power fields under a light microscope were calculated. The inhibitory rate (IR) was calculated as follows:

Cell adhesion assay 96-well plates (Nunc. Co.) were incubated at 37 °C with laminin or fibronectin or Matrigel for 1 h and then blocked with phosphate-buffered saline (PBS) containing 10 g/L BSA for another 1 h at the same temperature. The SGC-7901 cells exposed to different concentrations of c9,t11-CLA (25, 50, 100, and 200 μmol/L) for 24 h were suspended in serum-free medium at a density of 8 × 105 cells/mL. Then 0.1 mL of SGC-7901 cells suspension was added to each well, and incubated at 37 °C for 1 h. The plates were washed three times in PBS to remove the unattached cells, then the remaining SGC-7901 cells in 96-well plates were reacted with MTT for 4 h at 37 °C, then were solubilized with DMSO, and the absorbance of each well was measured at 570 nm with an ELX800 microplate reader (Bio-TEK Co.). Results were expressed as the percentage of total cells, assuming that the adhesion of cells in control represented 100%.

RT-PCR SGC-7901 cells were treated at different concentrations of c9,t11-CLA (25, 50, 100, and 200 μmol/L) for 24 h and collected by centrifugation. Total RNA was isolated using Trizol reagent according to the manufacturer’s instructions. The concentrations and purity of total RNA were determined by DUR 640 nucleic acid and protein analyzer (Beckman, USA). The first-strand cDNA was synthesized from 5 μg of total RNA using 50 pmol of oligo (dT) primers, 10 units of AMV reverse transcriptase XL) (TAKAKA Biotechnology, Dalian Co.), 20 units RNase Inhibitor, 5 × buffer and 10 mmol/L each dNTP in a total volume of 20 μL. PCRs were performed using respectively primers for TIMP-1, TIMP-2 and β-actin. The primer sequences are described in Table 1. PCR was carried out in 25 μL volume containing 4 μL of cDNA template, 10 × PCR buffer, 20 μmol/L each primer, 2.5 mmol/L dNTP mixture, 2.5 unit of Taq Polymerase. After denaturation at 94 °C for 5 min, the reaction mixtures were subjected to 35 cycles of PCR amplification in PCT-100TM programmable thermal controller (MJ Research Inc., USA). Each cycle consisted of 1 min of denaturation at 94 °C, a primer specific annealing temperature and period (at 58 °C for 45 s for TIMP-1, at 58 °C for 30 s for TIMP-2, at 55 °C for 30 s for β-actin) and extension at 72 °C (1.5 min for TIMP-1, 1 min for TIMP-2, 45 s for β-actin).

The amplified products were separated in 20 g·L-1 agarose gel and stained with ethidium bromide. After electrophoresis, the gel was observed and photographed under ultraviolet reflector. The density and area of each band were analyzed using ChemiImagerTM 4000 digital system (Alpha Innotech Corporation, USA).

Analysis of data was performed using the Student’s t test. A value of P < 0.05 was considered as statistically significant. 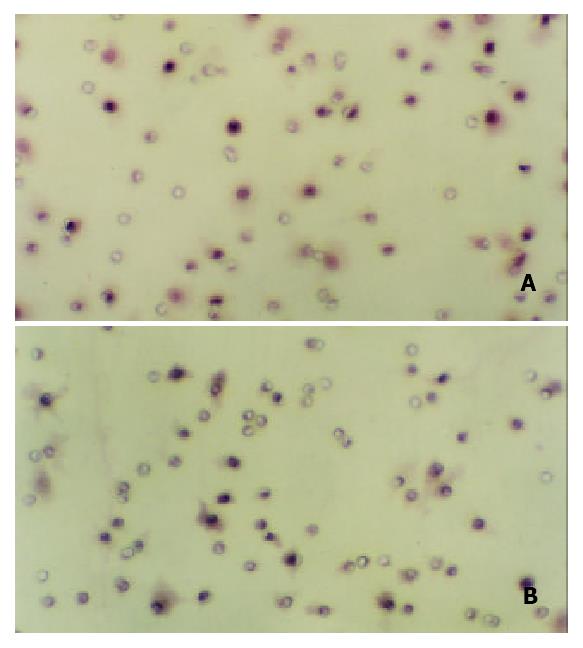 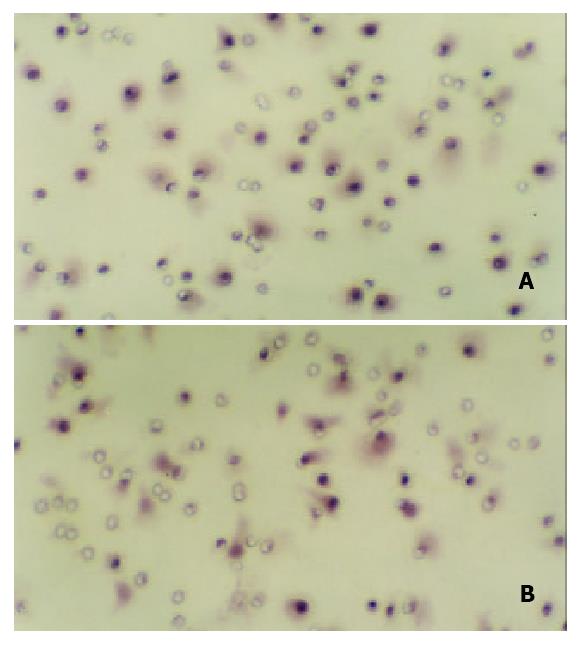 As shown in Figure 3, at levels of 25 μmol/L, 50 μmol/L, 100 μmol/L and 200 μmol/L c9,t11-CLA could decrease the attachment to FN, LN or Matrigel ability of SGC-7901 cells and the inhibitory effect was positively correlated with the concentration of c9,t11-CLA. 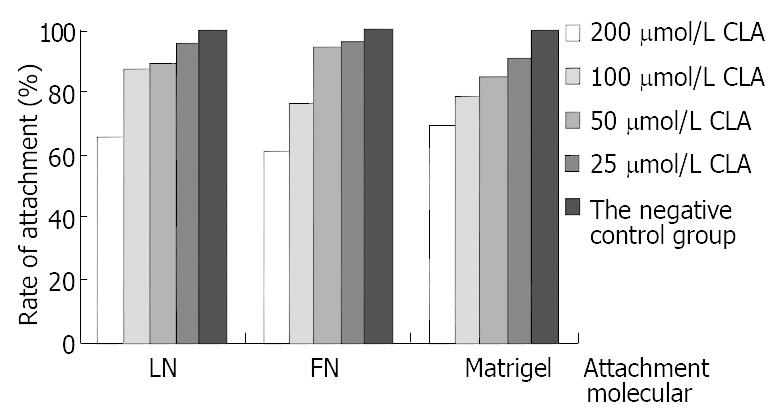 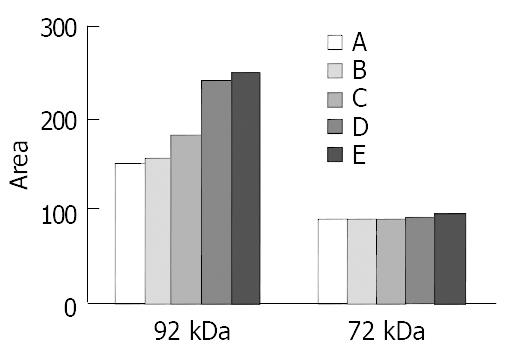 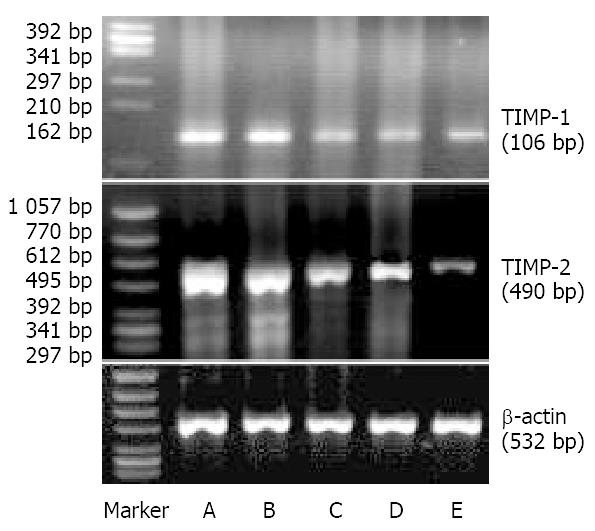 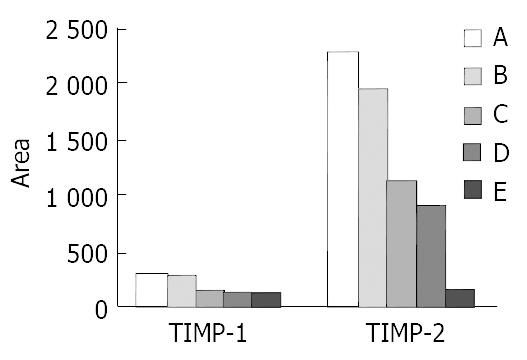 Metastasis is a multistage process involving interactions between tumor cells and extracellular matrix (ECM). Metastasis of cancer cells required several sequent steps, including changes in cell-ECM interaction, disconnection of intercellular adhesions, separation of single cell from tumor tissue, degradation of ECM, migration of tumor cells into the ECM, invasion of lymph and blood vessels, immunologic escape in the circulatory system, adhesion to endothelial cells, extravasation from lymph and blood vessels, proliferation of cells and induction of angiogenesis[39]. The complex metastasis cascade could be described as cell attachment to the extracellular matrix, proteolytic dissolution of the matrix, and movement of cells through the digested barrier[40]. Therefore, tumor metastasis can be inhibited by blocking attachment, invasion and motility. In vitro invasion, attachment, proteolytic dissolution of the matrix and movement are required for tumor cell through Matrigel and polycarbonate, thus the reconstituted basement membrane invasion assay could better reflects the invasion ability of tumor. This study showed that the invasion ability of SGC-7901 cells treated with 200 μmol/L, 100 μmol/L and 50 μmol/L of c9,t11-CLA was significantly inhibited, which was consistent with the study result from mice melanoma[37]. We conclude that CLA can inhibit the invasion and metastasis of mice melanoma and human gastric adenocarcinoma.

Many studies indicated the importance of cancer cell-matrix interaction. Cell and matrix interactions promoted cell migration, proliferation, and ECM degradation[39-43]. Also, it has been shown that prevention of tumor cell adhesion and migration was related to the inhibition of tumor cell invasion into the basement membrane, and agents inhibiting cell attachment in vitro decreased the invasion and metastatic potential of tumor cells in vivo. Therefore, cellular interactions with ECM, which promote adhesion and migration, were thought to be required for tumor invasion, migration, and metastasis. We demonstrated that after incubated with 200 μmol/L, 100 μmol/L and 50 μmol/L of c9,t11-CLA for 1 h, the attachment to extracellular matrix component of SGC-7901 cells was significantly reduced, which was consistent with our previous finding[37], indicating CLA could inhibit the attachment to extracellular matrix component of tumor cells. However, in previous study we found that CLA could not affect the direct migration of B16-MB cells and in this study we observed that 200 μmol/L CLA could reduce the direct migration of SGC-7901 cells. Therefore, attachment of tumor cells to matrix inhibited by c9,t11-CLA may be a mechanism for the inhibition of invasion and needs further study.

Basement membrane is a barrier for tumor invasion and metastasis. Tumor cell invasion through the ECM was an essen tial p ro cess in can cer metastasis[42]. Matrix metalloproteinases (MMPs) were important enzymes for the proteolysis of extracellular matrix proteins such as collagen, laminin and fibronectin[44]. Most MMPs were synthesized and secreted from the cells as proenzymes[45]. Human MMP-2 (gelatinase A/72kD type IV collagenase) and MMP-9 (gelatinase B/92kD type IV collagenase) were thought to be the key enzymes for degrading IV collagen, which is a principal structural protein of the basement mmebrane[46]. Studies revealed that increased production of MMPs was correlated with the invasion, metastasis, and angiogenesis of tumors[47]. In this study, we found that c9,t11-CLA significantly reduced 92 kDa type (MMP9) activities in the serum-free medium supernatant of SGC-7901 cells, but had no effect on 72 kDa collagenase (MMP2), showing that CLA could inhibit the ability of tumor cells to degrade basement membrane via reduction of type IV collagenase activities. MMPs activity is regulated by tissue inhibitors of metalloproteinase (TIMPs). There have been four members of the TIMP family determined up to date, of which TIMP-1 and TIMP-2 were best characterized as inhibitors of all known MMPs[44]. We found that TIMP-1 and TIMP-2 mRNA expression increased in SGC-7901 cells treated with c9,t11-CLA, indicating that c9,t11-CLA may inhibit the MMPs activity via inducing the expression of TIMP-1 and TIMP-2 mRNA and then inhibit the metastasis of SGC-7901 cells.

In conclusion, c9,t11-CLA inhibits several essential steps of metastasis in SGC-7901 cells. It can inhibit cell-matrix component interaction, reduce the activity of MMPs and increase the expression of TIMP1 and TIMP2 mRNA. Its mechanism in SGC-7901 cells metastasis needs to be studied further.

We are grateful to Dr. Rui-Hai Liu from Cornell University for providing 98% purity of c9,t11-CLA.