RESULTS: 3H-thymidine incorporation into SGC-7901 cells was significantly decreased by octreotide in a concentration dependent manner. Either size or weight of tumors treated with octreotide was significantly reduced in vivo. The inhibition rate for tumor was 62.3% in octreotide group. The genes of somatostatin receptors 2 and 3 were expressed in SGC-7901 gastric cancer cell lines. Extracellular signal-regulated protein kinase and c-Fos protein level were decreased in gastric adenocarcinoma treated with octreotide. Moreover, fetal calf serum stimulated activator protein-1 binding activity could be suppressed by octreotide potentially.

CONCLUSION: Inhibition of sequential molecular events in MAPK pathway may interpret the mechanisms underlying the effect of octreotide on the growth of gastric adenocarcinoma.

Somatostatin (SST) is a widely distributed neuropeptide that negatively regulates a number of cellular processes, including exocrine and endocrine, neurotransmission and cell proliferation[1-6]. Many studies have shown that SST and its analogues suppress the growth of normal and tumor cells in various types[7-11]. The biological effects of SST are mediated through five subtypes of SST receptors (SSTR) that belong to a family of G-protein-coupled receptors. The mechanisms responsible for the inhibitory effects of SST are related to many signal transduction pathways including control of cytosolic free calcium, adenylate cyclase, protein kinase C and SHP-1 activation[12-14]. The activator protein-1 (AP-1) family transcription factors have been implicated in the control of proliferation, apoptosis and malignant transformation. SST may inhibit the expression of c-Fos and binding of AP-1[15-18]. Advanced gastric adenocarcinoma still appears to be poor in its prognosis. Chemotherapy or radiation therapy has generally shown some clinical response but little survival advantage and is intolerable in many patients. Therefore, other therapeutic regimens for gastric adenocarcinoma need to be evaluated. The purpose of this study was to investigate the inhibitory effect of SST analog, octreotide on the growth of gastric cancer and the role of mitogen-activated protein kinases (MAPK) in cell proliferation after SSTR binding.

Gastric cancer cell line SGC-7901 was obtained from Cell Research Institute (Shanghai, China). The cells were cultured in RPMI1640 (Hyclon Inc, USA) containing 10% FCS, 100 U/mL penicillin and streptomycin at 37 °C in 5% CO2 atmosphere. After incubated for 24 hours in FCS free culture, cells were treated with octreotide (Novatis Pharma AG, Switzerland) for 22 h and then exposed to [methyi-3H]-thymidine (1 μCi suspended in 1 mL of RPMI1640) in the same medium for 2 h. The radioactivity was measured by a liquid scintillation counter (Becman LS1801, USA).

Xenografts were initiated by subcutaneous injection of 2 × 106 cells into the right flanks of nude mice (Balb/c nu/nu). Tumors after 4 weeks were aseptically dissected and mechanically minced. Pieces of tumor tissue in 3 mm3 were transplanted under serosa of stomach[19]. Two groups of mice (6 each group) were given octreotide at 100 μg/kg, s.c. or saline as control each day. After 8 weeks, tumors were excised and weighed. Tumor tissue was fixed in buffer neutral formalin for histological examination. The inhibition rate (%) was expressed as (weight of tumor in control group - weight of tumor in octreotide group)/weight of tumor in control group × 100%.

Total RNA was isolated using the Tripure RNA isolation kit (Roche limited, Hong Kong). First-strand cDNA was produced by Moloney murine leukemia virus reverse transcriptase (MBI, USA), primers for SSTR-2 (sense, 5’-ATGGACATGGCGGATGA-GCCACTC-3’; antisense, 5’-TACTGGTTTGGAGGTCTCCATTGAG-3’), SSTR-3 (sense, 5’-TGGGCACCCTCGTGCCAGCGG-3’; antisense, 5’-GGG-CGGCCGCTCCTGCCCG-C-3’), β-actin (sense, 5’-GACTACCTCATGAAGATCCT-3’; antisense, 5’-GCGGAT-GTCCACGTCACACT-3’). For SSTR-2, amplification runs consisted of an initial denaturation a 94 °C for 5 min, following by 35 cycles of denaturation (at 94 °C for 1 min), annealing (at 55 °C for 70 s) and extension (at 72 °C for 2 min), which were then linked to a final polishing step at 72 °C for 10 min. Cycling parameters were approximately the same as for SSTR-3 except that the annealing temperature was at 65 °C[20].

Tissue sections of gastric xenografts from control or octreotide group were incubated with 0.3% hydrogen peroxide for 30 min and then in normal goat serum for 30 min to block endogenous peroxidase activity and unspecific binding sites, respectively. Immunohistochemical staining was performed with rabbit polyclonal IgG specific for human ERK and c-Fos (Santa Cruz Biotechnology, Inc., USA) in a dilution of 1:100 overnight at 4 °C. The tissue sections were thereafter treated with biotinylated secondary antibodies in a dilution of 1:200 (Boster, Wuhan, China) and antibody-binding sites were finally visualized by avidin-biotin peroxidase complex solution (Boster, Wuhan, China) and 3’, 3’-diaminobenzidine. Protein extracted from SGC-7901 cells was incubated in loading buffer and heated at 100 °C for 10 min. The samples were loaded in lane and resolved on a 8% SDS-PAGE gel, transferred to nitrocellulose, and incubated with rabbit polyclonal antibody for either the c-Fos or ERK at 4 °C overnight. Filters were then washed three times in blocking solution and incubated with horseradish peroxidase-linked immunoglobulin followed by exposure to enhanced chemiluminescence Western bloting luminal reagent (Promega, USA).

SGC-7901 cells were grown to confluence in a 6-well plate. After serum starvation for 24 h, the cells were incubated with either 20% FCS alone or octreotide (1 × 10-5 M) for 2 h. At the end of incubation, nuclear protein was extracted as described above. The 32P-labled DNA probe was added and incubated for 30 min at room temperature. DNA binding activity was measured from free probe on a 7% non-denaturing polyacrylamide gel (PAGE) in TBE buffer. The gel was then dried for 1 h and autoradiographed at -80 °C. AP-1 oligonucleotide probe consensus was 5’-CGCTTGATGAGTCAGCCGGAA-3’. Bands were quantified with Image MasterTM VDS analysis software.

Statistical significance was determined by the Studen’s t-test. Differences with P values < 0.05 were considered statistically significant. All data were shown as the mean ± standard division. 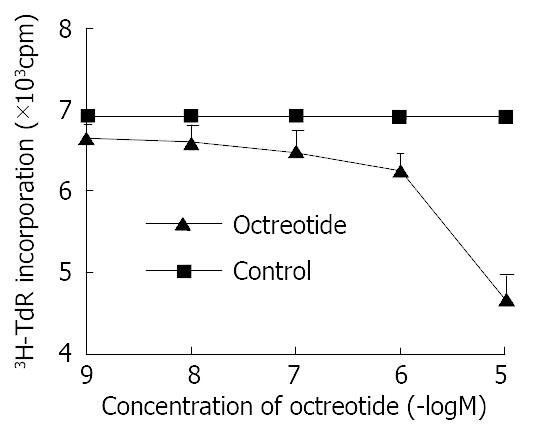 Figure 1 Effects of octreotide on 3H-thymidine incorporation of SGC-7901 cell. Each value was the mean ± SD of three sepa-rate experiments in which duplicate determinations were made.
Inhibition of the growth of orthotopic tumors in nude mice in vivo

At necropsy, xenografts were found in all stomaches of nude mice. The weight of tumor in animals receiving octreotide was 0.77 ± 0.14 g with 62.3% reduction (P < 0.01) as compared with control tumors that weighed 2.04 ± 0.29 g. The transplanted gastric adenocarcinomas were confirmed by histological examination. Compared with control group, tissue differentiation of transplanted gastric cancer did not show notable change between two groups. No side effect was observed in all animals.

Expression of SSTR-2 and SSTR-3 in human gastric cancer 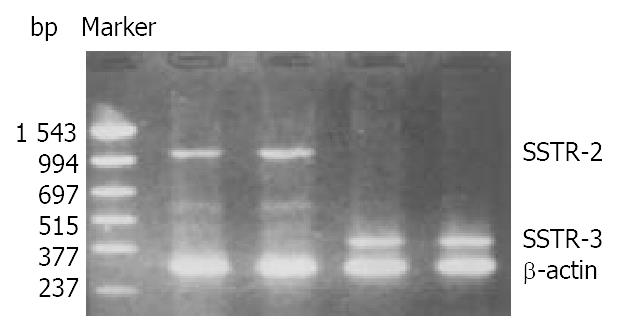 Figure 2 Expression of mRNA for SSTR-2 and SSTR-3 in SGC-7901 cells.
Inhibition of octreotide on expression of ERK 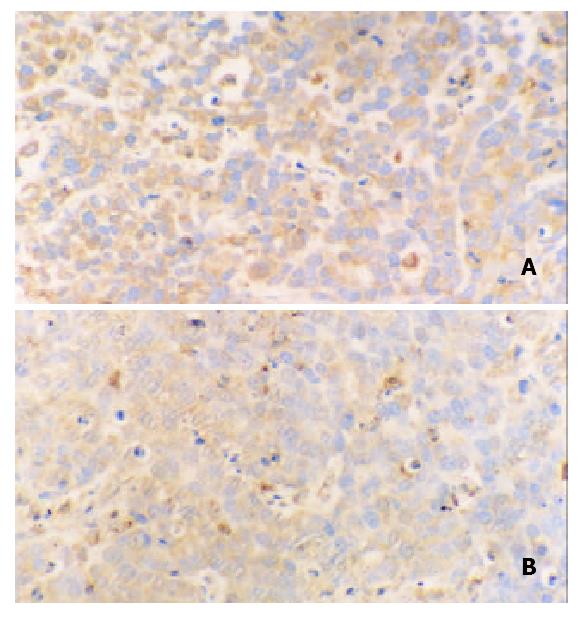 Figure 3 Immunohistochemical staining for ERK in tissues of transplanted gastric cancer in nude mice. A. control, B. octreotide group (200 ×). 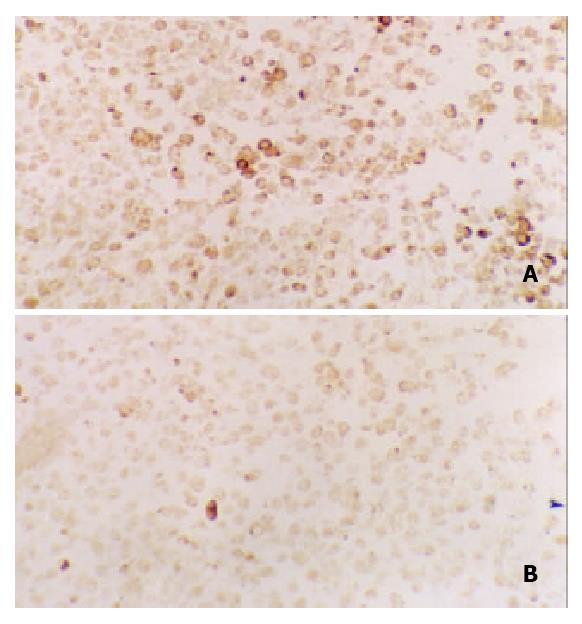 Figure 5 Immunohistochemical staining for c-Fos in tissues of transplanted gastric cancer in nude mice. A. control, B. ctreotide group (200 ×). 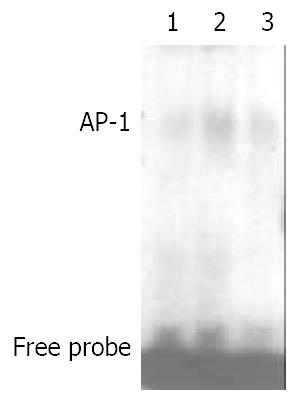 This study showed that octreotide potentially decreased 3H-thymidine incorporation into gastric adenocarcinoma cell line in a dose-dependent manner. It reflected the suppression of DNA synthesis in SGC-7901 cells and reduction of tumor cells in S phase of cell cycle. Furthermore, the direct inhibitory effect of octreotory on gastric cancer in vitro might be attributed to the interaction of SST with its specific cellular receptors on the cell lines.

We successively established the model of in situ transplanted tumor in nude mice with human gastric cancer cell lines, the xenografts in situ were found in all stomaches of nude mice in this study. The inhibition rate for tumor was 60% in octreotide group. This result in vivo was consistent with the observation in vitro described above. Early evidence that somatostatin analogs could inhibit the proliferation of somatostatin receptor-negative neoplasm suggested that octreotide probably acted indirectly on tumors through the inhibition of releasing some peptides or growth factors such as insulin, EGF, gastrin and IGF-1, which promote tumor growth[21-25]. Therefore, the arrested growth of transplanted gastric tumor in nude mice treated with octreotide may be either mediated directly by SST receptors or achieved indirectly via inhibition of various growth factors.

Five subtypes of SSTR, SSTR-1 to SSTR-5, have been cloned and functionally characterized during the last decade[26,27]. Natural SST is a non-selective ligand for all SSTR subtypes. Short synthetic SST analogs, however, such as octreotide and lanreotide demonstrate specific binding only to the subgroup consisting of SSTR-2, SSTR-3 and SSTR-5[28,29]. Since no specific agonist, antagonist or antibody against individual SSTR subtype was available, detection of SSTR subtype was usually performed through analysis of corresponding mRNA. Using RT-PCR technique, to our knowledge, we demonstrated the gene expression of human SSTR-2 and SSTR-3 in SGC-7901 cell line. It afforded the further evidence for the deduction that the anti-proliferative effects of octreotide on gastric cancer might be mediated directly by SSTR-2 or SSTR-3.

The binding of SST to its receptors in native membranes triggered the intracellular signaling pathways through the activation of G proteins[30-32]. Particular interest has been devoted recently to the regulation of MAPK pathway by SSTR, which might represent an important facet of signaling. The basic assembly of the MAPK pathway was a three-component module and included three kinases that establish a sequential activation pathway[33-36]. More than a dozen of mammalian MAPK family members have been discovered, which include the ERK1/ERK2, p38 MAPK, and JNK/SAPK pathways. The activation of MAPK might be translocated to the nucleus, where these kinases phosphorylate target transcription factors such as AP-1[35,37-39]. In the present study, expression of both ERKs and c-Fos could be inhibited by octreotide. Since the expression of c-Fos is regulated by ERKs, down-regulated expression of c-Fos in gastric cancer cell lines may reflect either suppression of ERKs protein or direct effect of octreotide on c-Fos.

Accumulated data have suggested the important role of AP-1 activation in pre neoplastic-to-neoplastic transformation in cell culture and animal models. AP-1 was a critical mediator of tumor promotion in a diversity of processes[40-43]. AP-1 was best characterized as a heterodimers of c-Fos and c-Jun[44]. For this reason, the expression level and activity of c-Fos were crucial to AP-1 activation[45]. Numerous reports have confirmed that inhibition of c-Fos or c-Jun leads to inhibition of cellular proliferation. In this study, the decreased availability of c-Fos protein by octreotide led to less binding to the AP-1 site. As a result, AP-1 activity stimulated by 20% FCS could be inhibited. The ability of AP-1 complex binding to its specific DNA elements was suppressed. Therefore, the proliferation signals of gastric cancer cell could not be transcribed.

In conclusion, the results obtained in the present study show that octreotide is able to inhibit the growth of gastric cancer in vitro and in vivo. The mechanisms may involve the down-regulation of ERKs or c-Fos expressions and binding activity of AP-1.