METHODS: A rat model of intestinal ischemia was made by clamping superior mesenteric artery and lung injury was resulted from reperfusion. The animals were randomly divided into 3 groups: sham operation (Sham), 2 h ischemia followed by 2 h reperfusion (IR) and IR pretreated with aminoguanidine (AG) - an inhibitor of inducible NO synthase (iNOS) 15 min before reperfusion (IR + AG). The lung malondialdehyde (MDA) and nitrate/nitrite (NO2-/NO3-) contents and morphological changes were examined. Western blot was used to detect the iNOS protein expression. Immunohistochemical staining was used to determine the change of nitrotyrosine (NT)- a specific "footprint" of ONOO-.

CONCLUSION: Intestinal IR increases NO and ONOO- production in the lung, which may be involved in intestinal IR-mediated lung injury.

A devastating consequence of tissue reperfusion is the damage in organs uninvolved in the initial ischemic insult[1]. Multiple organ dysfunction syndrome (MODS), as it is known, is the leading cause of death in critically ill patients and is a documented consequence of gut reperfusion[2-5]. Although systemic inflammatory characteristic of MODS can result in damage to any organ, onset of the syndrome is usually heralded by the development of respiratory insufficiency[2-9]. The pathophysiology of lung injury associated with intestinal ischemia-reperfusion (IIR) probably involves a variety of inflammatory and vasoactive mediators. Recently, the production of large amounts of nitric oxide (NO), a free radical produced by the inducible isoform of NO synthase (iNOS) has been implicated as a cytotoxic factor in a variety of pathophysiological processes, including various forms of inflammation and circulatory shock[10-14]. The cytotoxic effects of NO are in part, mediated by peroxynitrite anion (ONOO-), a reactive oxidant species formed from NO and superoxide at an almost diffusion-controlled rate[15-18]. The production of ONOO- has been demonstrated in various lung injury[19-21]. However, no evidence exists about its change and role in the lung injury following IIR. The major aim of the present study, therefore, was to determine the change and role of iNOS and peroxynitrite in lung injury induced by IIR.

Male healthy Sprague-Dawley rats (250-300 g) were anesthetized with intraperitoneal administration of sodium pentobarbital (40 mg•kg-1) and secured in a supine position on a heated restraining board at 37 °C after being shaved. Following midline laparotomy, a microvascular clip was placed across the superior mesenteric artery (SMA) for 120 min. Removal of the clip allowed reperfusion for120 min. This degree of IIR is consistently associated with intestinal, hepatic and pulmonary injury with a 12-hour mortality rate of 100%.

To determine the effect of iNOS induction on the peroxynitrite formation and the lung injury, aminoguanidine (AG), an inhibitor of iNOS[23], was used. The rats were randomly divided into 3 groups (n = 8 in each): Sham, IR and IR+AG. The surgical sham group underwent full surgical preparation including isolation of the SMA without occlusion. After that they were followed for the same aggregate period of time. The IR group received 2 h of ischemia and 2 h of reperfusion. The IR + AG group was given AG (10 mg•kg-1 intravenously, Sigma, USA) 15 min before reperfusion. The animals in IR group and sham group were treated with equal volume of the vehicle (normal saline solution, NS; 1 mL•kg-1). All animals were killed by exsanguination at designated time. Both lungs were harvested immediately for the following detection.

The right middle lung lobe was harvested and fixed in 10% formalin. After embedded in paraffin, sections of 8 μm were stained with hematoxylin and eosin for light microscopy.

The right base of lung was harvested and immediately homogenized on ice in 9 volumes saline. The homogenates were centrifuged at 4000 r•min-1 at 4 °C for 10 min. The MDA content in the supernatants was measured using MDA assay kit (Nanjing Jiancheng Corp. China).

NO2-/NO3- production, an indicator of NO synthesis, was measured in the lung homogenate with a NO assay kit (Nanjing Jiancheng Corp. China) following the manufacturer's instruction.

The left lung was homogenized with PBS (pH7.2) and centrifuged at 4 °C, 18000 r·min-1 for 10 min. After precipitated unsolubilized fraction was discarded, the protein concentration in the supernatant was determined by Coomassie blue dye-binding assay (Nanjing Jiancheng Corp. China). Aliquots (30 mg) of protein from each sample were electrophoresed on a 120 g•l-1 SDS-polyacrylamide gel for 4 hour at 100V. The protein samples were transferred onto a nitrocellulose membrane (Amersham, USA). The membrane was then probed with polyclonal rabbit anti-rat iNOS antibody (1:50 dilution, Santa Cruz Co., USA) for 2 h at 37 °C. After 3 washes with TPBS, blots were visualized with the use of an amplified HRP kit (Wuhan Boshide, China). The presence of iNOS was indicated by the development of brown color.

The histological structure of alveolar and mesenchymal cells was normal in the lungs of sham group, while the lung tissues from the IR group were significantly damaged, with pulmonary edema, hemorrhage and inflammatory cell infiltration. Administrating AG before reperfusion could attenuate significantly the lung injury as showed by light microscope (Figure 1).

Figure 1 Light microscopic observation on the lung after IIR with pretreatment of AG in rats (HE × 400). A. The normal lung tissue structure was found in sham group; B. Lung edema, hemorrhage and inflammatory cells sequestration were found in the IR group; C. Decreased morphological changes induced by the intestinal IR were found in the IR + AG group.
Change of MDA content

The formation of peroxynitrite in the lung sections was demonstrated by immunohistochemical staining with monoclonal anti-NT antibodies. In the sham group, no brown deposits were present in lung sections. In contrast, very strong staining was observed in lung tissue sections from the IR group. Compared with the IR group, the immunostaining for NT in the IR + AG group decreased significantly, indicating that inhibition of iNOS activity and decrease of NO production could reduce the peroxynitrite formation (Figure 3). 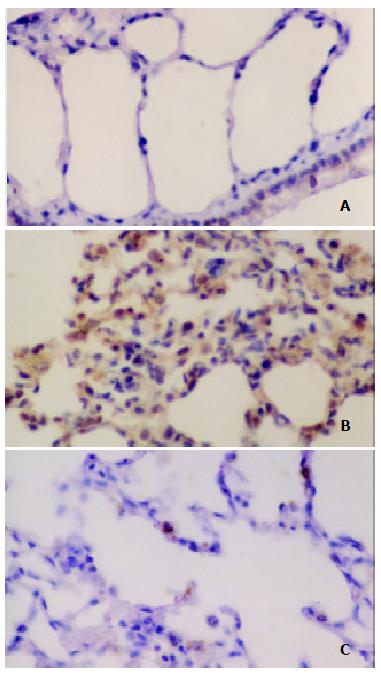 The lung is one of the very important target organs in multiple organ dysfunction syndrome (MODS) or multiple system organ failure (MOSF) caused by severe injury[1-9]. It has been found that in addition to the direct trauma, the lung could also be damaged by indirect injury such as gut, liver and skeletal muscle reperfusion, as well as aortic occulation-reperfusion and circulatory shock[1-9]. The present results showed that 2 h of intestinal ischemia followed by 2 h of reperfusion induced lung injury, manifested as the histological evidence of lung edema, hemorrhage and PMN infiltration. Moreover, the IIR mediated lung injury was oxygen-dependent, as indicated by the increase in the levels of MDA, an established marker of oxidative stress.

The mechanism of respiratory failure after intestinal I/R is complex and poorly understood. Under the condition of an inadequate mucosal blood flow, the gut barrier function can be progressively impaired and invaded by bacteria or endogenous endotoxin[24-26]. This process is associated with activation of systemic inflammatory mediators including bacteriotoxin, inflammatory mediators, such as tumor necrosis factor (TNF) and interleukin (IL) and immunocytokines[26-31].In addition, several recent observations implicate that NO may be an important participant in the pulmonary response to IIR[32]. It has been suggested that nitric oxide (NO), produced from endothelial constitutive nitric oxide synthase (ecNOS), may be an important protective molecule at the onset of the IR of the small bowel. In this regard, inhibitors of endogenous NO production greatly exacerbate the increase in epithelial permeability and cardiovascular dysfunction in the reperfused post-ischemia intestine[32-34], while administration of NO donors prevents the early rise in epithelial permeability and tissue dysfunction[35,36]. Excess NO production has been attributed to a second NOS (induced NOS, iNOS) that is not present under normal condition but can be induced in response to systemic inflammatory states, including IR. The induction of iNOS has been implicated in the pathogenesis of IIR and it was reported that inhibition of iNOS activity and nitric oxide production could attenuate the intestinal ischemia/reperfusion injury[37-40]. In the present experiment, we studied the contribution of iNOS to the IIR-induced lung injury. The results demonstrated that 2 h of intestinal ischemia followed by 2 h of reperfusion up-regulated significantly the lung iNOS expression, accompanied by the elevation of pulmonary nitrate/nitrite (stable metabolites of NO) level. This is consistent with the findings of Virlos IT, et al[34] who demonstrated that pulmonary iNOS activity in rats subjected to IIR was significantly increased. The effect of increased iNOS expression on IIR-induced lung injury was indirectly assessed by administration of AG, a selective inhibitor of iNOS. The results that in vivo treatment with AG reduced markedly the nitrate/nitrite levels and the lung injury demonstrated that the induction of iNOS and the excessive NO production in the lung following intestinal IR involved in the IIR-induced lung injury.

Though the cytotoxic actions of the excessive NO production may be involved in several potential mechanisms, recent studies suggested that peroxynitrite, may be a key mediator for cytotoxicity of excess NO generation and is involved in many pathological processes[15-18]. The cytotoxic processes triggered by peroxynitrite include initiation of lipid peroxidation, inhibition of mitochondrial respiration, inhibition of membrane pumps, depletion of glutathione, and damage to DNA with subsequent activation of poly (ADP-ribose) synthetase and concomitant cellular energy depletion[19-21,41,42]. Peroxynitrite is now generally considered an oxidant more toxic than either NO or superoxide anion alone. Furthermore, it has been shown that a major product of the reaction of peroxynitrite with protein is the addition of a nitro group in the ortho position of tyrosine to form NT which could be detected by antibodies specific to protein NT[16]. The present results of immunohistochemical staining with monoclonal anti-NT antibodies demonstrated that peroxynitrite formation occurred in the reperfusion phase of ischemic intestine. The results also suggested that the formation of peroxynitrite was correlated with iNOS expression and involved in the IIR-induced lung injury, because inhibiting iNOS activity with AG reduced significantly the NT immunoreactivity and attenuated the IIR-induced lung injury. The cytotoxic actions of iNOS-NO and peroxynitrite may be associated with their damages to the endothelial barrier, their oxidant to the membrane lipid and the triggering of the PMN sequestration in the lung, manifested as the detection of lung MDA content and the observation of the lung pathological changes.

In summary, the present results demonstrate that the systemic inflammatory response and lung injury occur following IIR with an increase of NO, iNOS expression and the formation of peroxynitrite in the lung. Inhibition of iNOS prevented the lung injury and the formation of NT, suggesting that excessive NO production and peroxynitrite formation are cytotoxic to the cell and tissue and are involved in the secondary lung injury induced by the IIR. These results may partially explain the mechanism of MOF and suggest that inhibiting peroxynitrite may be a novel pharmacological approach to prevent cell injury and MOF.