AIM: To study the expression of IGF-1 and IGF-1R and its intervention by interleukin-10 in the course of experimental hepatic fibrosis.

METHODS: Hepatic fibrosis was induced in rats by carbon tetrachloride intoxication and liver specimens were taken from the rats administered CCl4 with or without IL-10 treatment and the animals of the control group. Immunoreactivities for insulin-like growth factor-1 (IGF-1) and IGF-1 receptor(IGF-1R) were demonstrated by immunohistochemistry, and their intensities were evaluated in different animal groups.

CONCLUSION: The expression of IGF-1 and IGF-1R immunoreactivities in liver tissue seems to be up-regulated during development of hepatic fibrosis induced by CCl4, and exogenic IL-10 inhibits the responses.

Hepatic fibrosis is a common pathological change resulted from various chronic hepatic injuries, which is characterized by an increase of extracelluar matrix (ECM) deposition in the Disse's space and the imbalance between synthesis and degeneration of ECM. It is a change before cirrhosis[1-6]. Many studies suggested that cytokines play important roles during hepatic fibrosis with different mechanisms[1,7-16]. There is a contrary effect of insulin-like growth factor-1 (IGF-1) on rat hepatic stellate cells (HSC) in vivo and in vitro. IGF-1 and its receptor (IGF-1R) may play a significant role in hepatic fibrosis. The rat hepatic fibrosis model was established and the immunoreactivities for IGF-1 and IGF-1R in rat liver tissues were assessed to show the possible involvement of IGF-1 and IGF-1R in the process of hepatic fibrosis and the effect of interleukin-10 on this change.

Immunohistochemistry and data evaluation The rat liver tissues were sectioned at a thickness of 4 μm. The sections were deparaffinized with xylene, dehydrated with graded ethanol, incubated in PBS containing 3% H2O2 to block endogenous perxoidase activity and then incubated in PBS containing 0.1M citrate to saturate nonspecific binding sites. After incubation with rabbit anti-rat IGF-1 or IGF-1R monoclonal antibody (American Neomarkers Company), the recations were with the instance S-P immunohistochemistry reagents (American Zymed Company). And then, the sections were incubated in a buffer containing 3, 3-diaminobenzidine tetrahydrochloride (DAB) and H2O2 to produce a brown reaction product, then were dehydrated and coverslipped. The reactions were graded according to their intensities and percentage of the positive cell as follows: negative = 0, stained yellowish = 1, stained with deep yellows or brown = 2; the percentage of stained cell: < 5% = 0, 6% to 25% = 1, 26% to 50% = 2, > 50% = 3. Then the eventual result was by these two scores according to the following predefined definitions: 0 to 1 = negative (-), 2 to 3 = positive (+), 4 and above 4 = strongly positive (++). Ridit analysis described the difference between groups.

The positive rates of IGF-1 in the control group, the CCl4-treated group and the CCl4-and IL-10-treated group were 38.1%, 92.0% and 71.4%, respectively. Those of IGF-1R were 33.3%, 80.0% and 64.3%, respectively. The granular positive products were localized in the cytoplasm and/or at the membrane, but not in the nuclei. In group C, IGF-1 and IGF-1R signals were weak, mainly located in the perivenular area (Figure 1, Figure 2). In group M, the expression increased obviously with the development of hepatic fibrosis, and the positive cells distributed throughout the hepatic lobule (Figure 3, Figure 4). In group T, the changes were less pronounced than in group M (Figure 5, Figure 6). 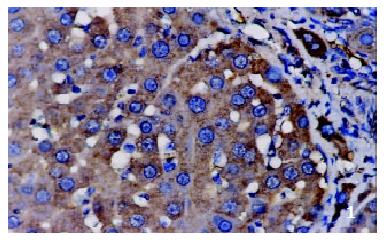 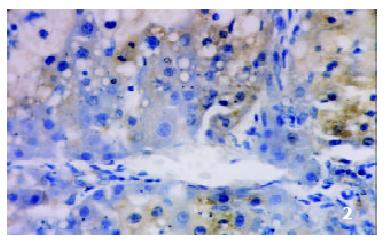 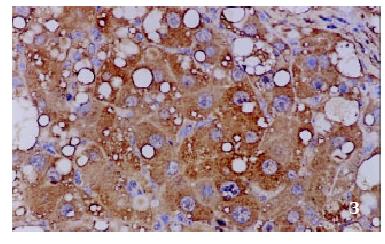 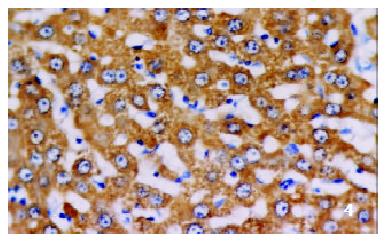 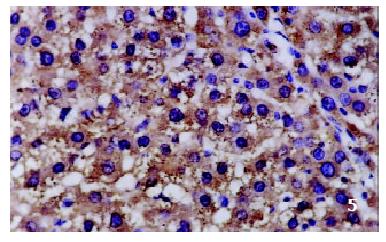 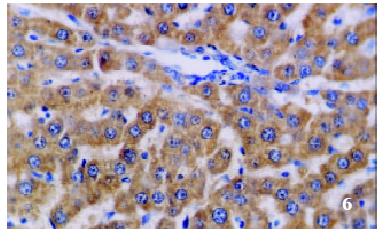 Hepatic fibrosis is the early stage of hepatic cirrhosis, characterized by accumulation of excessive extracellular matrix, necrosis, nodular regeneration of hepatocytes and formation of fibrous septum[1-6]. Cytokines play important roles in the formation and regression of hepatic fibrosis[1,7-16].

In the present study, up-regulated expression of IGF-1 and IGF-1R was observed in liver tissues injured by CCl4-intoxication, and was positively correlated with the development of hepatic fibrosis. However, the response was less pronounced in IL-10- treated group.

Insulin-like growth factors (IGFs) include two related homologous polypeptides: IGF-1 and IGF-2, which have similar structure and activity in vitro, but different biological effect in vivo. Activation of mitosis and induction or acceleration of differentiation are their major functions, which are mediated through IGF-1R by means of autocrine, paracrine and endocrine mechanisms. IGF-1R is a transmembrane tyrosine kinase receptor. After binding with its ligand, intracellular transcription and synthesis of proteins are activated and regulated through a series of signal transduction. This gives rise to insulin-like metabolic effects and promotes proliferation and differentiation of cells. It is also involved in the maintenance of transformed cell phenotypes. Its expression is essential for the transforming function of cell cycle-related protocogenes and viral oncogenes[17,18]. In addition, IGF-1 and IGF-1R have an anti-apoptosis effect on different cells[13]. Liver is the main organ of IGF-1, but the function of IGF-1 and IGF-1R in hepatic fibrosis still remains controversial. Many authors have observed a decreased serum concentration of IGF-1 and insulin-like growth factor-binding protein 3 (IGFBP3) in patients with hepatic cirrhosis, this change is correlative with cirrhosis progression. With the treatment of recombinant somatotropin, the serum concentration increased along with the improvement of protein synthesis and liver metabolism. For these patients, the IGF-1 concentration below 10 nmol/L was considered an unfavored response to the treatment and poor prognosis[19-31]. Castilla et al[32] and Myguerza et al[33] reported that the histological parameters in hepatic fibrosis animals were improved after being treated with exogenous IGF-1. So IGF-1 might act as an antifibrogenic factor. On the contrary, other researches speculated IGF-1 had a great influence on hepatic stellate cell (HSC), which was the main producer of ECM, such as activating proliferation, inhibiting apoptosis, accelerating the secretion of collagen type I, etc[13,34]. The function of IGF-1 also seems to be regulated by IGF-BP, IGF-1R and other cytokines[22-30].

The present study observed and evaluated IGF-1 expression with the fibrosis progression, which might be a compensatory reaction to the continuous loss of hepatocytes in the CCl4-treated animals. We consider that IGF-1 may stimulate the replication of hepatocytes and interfere with fibrosis. The discordance was observed between the IGF-1 level in liver tissue and that in serum, with the former higher and the latter lower, this is likely due to the decrease of IGF-1 released from hepatocytes to blood circulation. In other words, the hepatocytic secretion of IGF-1 maybe regulated by means of autocrine under such a situation. The positive correlation between the expression of IGF-1 and IGF-1R and the fibrosis progression may be helpful for fibrosis staging.

IL-10 is an antifibrogenic cytokine produced by Th2 cells, macrophages, stellate cells and hepatocytes[35-47]. It has been reported the deficiency of IL-10 prompted fibrosis probably by its failure in inhibiting the overproduction of TGF-β1 and TNF-α. The latter two cytokines are secreted by macrophages and can enhance synthesis of collagen type I[48]. The knock-out experiments (IL-10-/-mice) indicated that endogenous IL-10 actually relieved CCl4-induced fibrosis[49-51]. In our previous study, exogenous IL-10 was found to be able to inhibit the progress of fibrosis and might be used for treatment. Similar results were also reported by Nelson, but its mechanism remains obscure[52,53]. The present study showed that IGF-1 and IGF-1R expression decreased with the improvement of fibrosis after treatment with IL-10. It seems that antifibrogenic effect of IL-10 is associated with down-regulation of IGF-1/IGF-1R. More works are demanded to clarify whether this action is regulated by IGF-1 and IGF-1R or the decrease of IGF-1R expression is only a phenomenon of hepatic cirrhosis remission.