Article-Type of This Article
H. Pylori

METHODS: A retrospective study of 26 cases of lymphoma diagnosed by gastroscopic biopsy during 1999 to 2001 from gastroscopy files of Xijing Hospital was made. The diagnostic criteria were adopted according to the new classification of non-Hodgkin's lymphoma.

RESULTS: Twenty-six cases of primary gastric lymphoma consisting of 15 men and 11 women, aged between 23 to 76 years were recruited from 6225 cases who received gastroscopy. All of them were diagnosed by both endoscopic findings and histological examinations. Histologically, 23 cases were MALToma (low grade) and 3 cases lymphoblastic lymphoma (high grade). Immunohistochemically, all cases were CD20 positive, while CK and EMA were negative.

CONCLUSION: The majority of the cases of primary low-grade gastric lymphoma have morphologic and clinical features that justify their inclusion in the category of low-grade lymphoma of mucosa associated lymphoid tissue.

Primary gastric lymphoma is the most common extra nodal lymphoma, and the vast majority of them are of B cell origin. Most of the low-grade gastric lymphomas are of the mucosa-associated lymphoid tissue (MALT) type[1-4]. The concept of MALT lymphoma was first proposed in 1983 by Isaacson and Wright[1]. Histologically it is characterized by centrocyte-like cells, often with plasmacytic differentiation, and accompanied by lymphoepithelial lesions. The histopathological criteria for the diagnosis of gastric MALToma have largely been based on analysis of partial gastrectomy specimens. From routine biopsy diagnosis by gastroscopy, it is very difficult to distinguish MALToma from reactive lymphoid hyperplasia on small pieces of tissue. In this article, twenty-six cases were retrospectively analyzed with regard to criteria of diagnosis and clinicopathologic characteristics.

During the period of 1999-2001, 6225 cases received gastroscopy in Xijing Hospital and 26 cases of gastric lymphoma were diagnosed according to the new classification of lymphoid neoplasms. The patients (11 women and 15 men) ranged in age from 23 to 76 years. According to the new classification of lymphoid neoplasms[2], all the histology of MALToma was established if the following criteria were met: (1) invasion of epithelial structures resulting in "lymphoepithelial lesions"; (2) small lymphocytes, marginal zone cells and/or monocytoid B cells; (3) infiltration of diffuse, perifollicular, interfollicular, or even follicular type due to colonization of reactive follicles. Tissue specimens were embedded in paraffin, sectioned and stained with haematoxylin-eosin and immunohistochemical method.

Immunohistochemical staining of CD20, CD45, CD45RO, Keratin and EMA were performed on paraffin-embedded sections by using the monoclonal antibody (Dako, Copenhagen, Denmark). For antigen retrieval, the deparaffinized slides were microwaved in 0.01 mol/L sodium citrate buffer (pH6.0) for 10 min. Endogenous peroxidase activity was inhibited by hydrogen peroxidase. The sections were incubated with the monoclonal antibody (1:100) overnight at room temperature, and then the detection was performed by the avidin-biotin peroxidase complex method. The sections were counterstained with hematoxylin. PBS buffer solution was substituted for the first antibodies as the negative control, whereas the lymphoma cases were used as positive control.

Based on the appearance of biopsy specimens, all 26 cases were gastric lymphomas, of them 23 were MALToma (low grade) and 3 lymphoblastic lymphoma (high grade).

Macroscopically, MALToma could be categorized into erosion and ulcerative types; the size of tumor varied from millet to rice. The lymphomatous cells infiltrated into the mucosa, sub-mucosa and muscular layer diffusely or locally. Typical features of a low-grade mucosa-associated lymphoma with an organized architectural arrangement including lymphoid follicles, centrocyte-like cells and classical lymphoepithelial lesions were seen. Lymphoid follicles were seen and the germinal centers were partly or entirely replaced by lymphoma cells. Dendritic cells and macrophages with chromophilic bodies disappeared. This phenomenon is called follicular colonization. Lymphoepithelial lesion was shown in which there were clusters of pleomorphic, mitotically active lymphomatous cells infiltration locally and gastric glands destroyed (Figure 1). The neoplastic cells presented a serial cell lineage of small lymphocyte, centrocyte-like cell, monocyte-like B cell, lymphoplasma cell, and also centroblast like cells. In all these cells, several kinds were in a mixed distribution, but usually one kind was predominant. Immunohistochemically, all cases of MALTomas were CD20 positive (Figure 2) and CD45 positive. CK and EMA were negative in all cases. 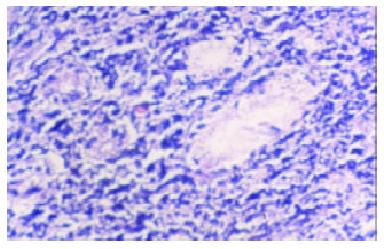 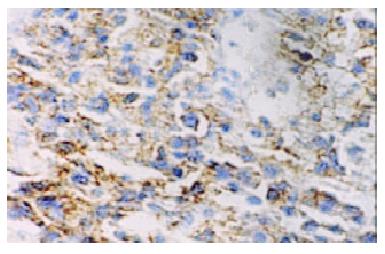 The gastrointestinal tract is the most frequently involved extranodal site of origin for non-Hodgkin's lymphoma, accounting for 12%-15% of all non-Hodgkin's lymphomas and 30%-40% of all extranodal lymphomas[1,5]. The lymphomas in the stomach arise from MALT. Usually they are not present in the stomach but acquired following H. pylori infection of the gastric mucosa.H. pylori, a microaerophilic Gram-negative rod, has been proposed as the causative agent for low-grade primary gastric lymphoma of MALT[6-10]. Presenting features of primary gastric lymphomas are nonspecific, with dyspepsia, vague epigastric pain, nausea and vomiting[11-15]. Fever with night sweats and elevated lactate dehydrogenase levels are very uncommon. By endoscopy, diffuse gastritis, thickened gastric folds, erosions and occasionally ulcers are more common findings. Although any region of the stomach may be involved, most MALTomas arise in the antrum or the distal body, the sites commonly colonized by H. pylori. Histologically, the prominent lymphoepithelial lesion on endoscopic biopsy specimens is one of the most important features for the diagnosis of MALToma of the stomach[2,16-18]. They are seen in 100% of the biopsy specimens. It is a key point for the diagnosis of MALToma that the infiltrating lymphocytes showed homogeneity in marginal zone cells, small lymphocytes, or monocytoid B cells[2,16-18]. All of the three types of cells comprise low-grade lymphomas with a dense infiltrate of a superficial and peripheral plasma cell component. Cytologically, neoplastic lymphocytes are characterized by cellular heterogeneity, including centrocyte like cells (small, atypical cells, but with more abundant cytoplasm), monocytoid B cells, small lymphocytes, and plasma cells. Occasionally large cells (centroblast or immunoblast like) are present in most cases. If reactive follicles are present, neoplastic cells will occupy the marginal zone and/or the interfollicular region. When neoplastic lymphocytes take on a follicular pattern, it is called follicular colonization.

Therefore, the diagnosis of gastric MALToma is based on (1) prominent lymphoepithelial lesions; (2) dense lymphoid infiltrate with marginal zone cells, small lymphocytes, or monocytoid B cells. Lymphoepithelial lesions are considered as the characteristic features of MALToma. Nest formation could also be found in the inflammatory and reactive status, it might be difficult to distinguish them from the real lymphoepithelial lesions. In such cases, immunohistochemistry may be helpful. The former is several leukocytes of polyclone and the latter is the lymphocytes of mono-clone. Follicular colonization is easy to be misjudged as reactive follicles. The following morphological characteristics and immuno- phenotype may be helpful for the differentiation[14-18]: (1)Follicular colonization has no dendritic cells or macrophages with chromophilic bodies. (2) Centrocyte like cell is the immunophenotype of B cells in the marginal area, rather than at the germinal center. Both lymphoepithelial lesion and follicular colonization are characteristic features for diagnosis, but they could only be seen in some of the cases. If one case is highly suspected for MALToma of the stomach, repeated biopsy should be performed if clinically indicated and then, immunohistochemistry and molecular biology technique should be done.