AIM: To describe distribution of the phosphorothioated antisense oligodeoxynucleotides (PS-asODNs) conjugated to galactosylated poly-L-lysine (Gal-PLL) in mice, and to observe their effects on expression of HBV gene in the 2.2.15 cells and transgenic mice.

METHODS: According to the result of direct sequencing of PCR amplified products, a 16 mer phosphorothioate analogue of the antisense oligodeoxynucleotides (PS-asODNs) directed against the HBV U5-like region was conjugated to the hepatotropic Gal-PLL molecules. Its distribution was demonstrated using asODNs labeled with 32P at the 5’ terminus with a T4-polynucleotide Kinase. Its inhibition effect on HBV expression was observed in the transfected 2.2.15 cells and transgenic mice.

RESULTS: The Gal-PLL and asODNs could form stable complex at a molar ratio of 2:1. As shown in the HBV-transfected 2.2.15 cells, the inhibition effects of asODNs alone and asODNs conjugated to Gal-PLL, at 10 μmol/L for both, on HBsAg and HBeAg production were different, the former being 70% and 58%, respectively, and the latter being 96% and 82%, respectively. A more pronounced reduction was also observed in viral DNA load in the culture supernatant for the test with Gal-PLL-asODNs. Among many mouse organs, livers retained more asODNs molecules after administration. The preferential concentration in liver was found to be 52.14% for Gal-PLL-asODNs, as high as 2.38-fold of that for asODNs (21.9%). Both elements decreased gradually in liver, with 2.9% of the former, 5.99% of the latter retained 24 h after the administration. The injection interval, therefore, was recommended to be 24 h. In the transgenic mice, serum HBsAg decreased significantly (P < 0.01) at the 12th day after administrating Gal-PLL- asODNs, the serum HBV DNA turned negative in 4 of the 6 mice.

CONCLUSION: Antisense oligodeoxynucleotides conjugated to Gal-PLL can be concentrated in liver and intaked by hepatocytic cells. This may result in specific inhibition of expression and replication of HBV in vitro and in vivo.

The antisense oligodeoxynucleotides (asODNs) have been demonstrated previously to be effective for inhibition of HBV gene expression and viral replication in vitro and in vivo, being potential new agents for anti-HBV therapy[1-4]. However, there are still some hinders for their potential application. First, their molecules must be water soluble and can penetrate the lipophilic

cell membrane. Second, they must be resistant enough to enzymatic degradation to allow their concentration in liver. Third, They must be bound specifically to the target HBV sequence. In the present study, a 16-mer phosphorothioate analogue of

the antisense oligonucleotides (PS-asODNs) directed against the HBV U5-like region was synthesized and then conjugated to hepa totropic galactosyted poly-L-lysine (Gal-PLL). The anti-HBV effects of asODNs and Gal-PLL-asODNs were demonstrated in the 2.2.15 cells and transgenic mice. In addition, distribution of asODNs was studied in mice.

and Gray[8], with their molar ratio being 10:1. A 16-mer phosphorothioated antisense oligodeoxynucleotide (5'-CATGCCCCAAAGCCAC-3'), corresponding to the nucleotides 1980-1905, and complementary to preC/C regions of HBV genome (ayw1 subtype), was synthesized. As a reference molecule, another 16-mer phosphorothioated oligodeoxynucleotide (5'-AGTCACTCAGTCAGTC-3'), unrelated to the HBV sequence, was prepared. By agarose gel(2.5%) electrophoresis, conjunctive ratio of Gal-PLL to PS-asODNs was identified[9].

Anti-viral effect of PS-asODNs in vitro

The 2.2.15 cells were incubated for 60 h, and then were transferred to the medium containing asODNs, HBV-specific Gal-PLL-asODNs, HBV-unrelated Gal-PLL-ODNs, or the medium without any oligodeoxynucleotides. The concentration of ODNs in the media was 10 μmol/L. 72 h later, the 2.2.15 cells were transferred to the ordinary medium for 72 h, then 200 ul of supernatant was used for the ELISA reaction for HBsAg and HBeAg, HBV DNA was detected by dot hybridization.

Kunming mice, (weighing 20 g in average) were used to describe the distribution of asODNs. HBV transgenic mice, were provided by 458 Hospital of PLA in Guangzhou, China, whose expression of HBsAg (126-930 ng/ml) was well documented

43 μL for 1.5 h. The reaction was stopped by adding 9 μL 0.5M EDTA (pH8.0). The product was extracted by chloroform and separated using Sephadex-G50. Using the same method, the reaction was carried out twice.

Distribution of as ODNs in Kunming mice

A total number of 24 Kunming mice were equally divided randomly into two groups, one for asODNs and the other for Gal-PLL-asODNs. The labeled asODNs were equally divided into 25 pieces, each piece for 200 μL, with the radioactivity of 9.42 × 106 cpm. Twelve pieces of asODNs were mixed with Gal-PLL at a molar ratio of 1:2, and were incubated at room temperature for 60 min. Twenty-four pieces of asODNs were administered intravenously via tail vein to 24 mice, respectively.

At 2 min, 30 min, 1 h, 4 h, 13 h, 24 h following intravenous administration, 2 animals were sacrificed for each group at each time point, their blood and organs were collected for determination of total radioactivity using liquid scintillation counter.

Anti-HBV effects of Gal-PLL-asODNs in the transgenic mice

Twelve mice, strongly positive for HBsAg and carrying HBV DNA in serum were equally divided into Gal-PLL-asODNs and control groups. Gal-PLL was then mixed with asODNs in a molar ratio of 2:1 at room temperature. The mixture was then administered intravenously via the tail vein in a dose of 15 μg/g. weight/d of asODNs for successive 12 d. The same volume of saline was used for the control mice by the same means. Blood samples were collected at the venous plexus behind orbital cavity before, or 12 d after the treatment. Sera were separated by incubating at 37 °C for 30 min and contrifuged, and stored at -20 °C for use. Being diluted at 1:100 with normal saline, the sera were subjected to the ELISA for HBsAg and nested PCR (TakaRa Biotechnology Co.) for viral DNA, with its product being 230 bp in size.

Figure 1 shows that the band of PCR product was between the size of 221-298 bp. The sequence of the 132 bp product

GTGGCTTTGGGGCATGGACATC-GACCCTTATAAAGAATTTGGAGCTACTG-3'. This was in accordance with the corresponding sequence of HBV genome (ayw1 subtype) which contained the preC region (1816-1902), U5-like sequence (1857-1918)

As shown in Table 1, after incubation of 2.2.15 cells with asODNs for 8.5 d, the inhibition rates of HBsAg, HbeAg were 70% and 50%, respectively, while those with Gal-PLL-asODNs were 96% and 82%, respectively. Only slightly negative effects were observed for the reference agent Gal-PLL-ODNs on expression of HBsAg (19%) and HBeAg (10%). The Gal-PLL-asODNs treatment was shown to markedly reduce the amount of HBVDNA in the 2.2.15 cells and the culture medium, compared with free asODNs and conjugated HBV-unrelated Gal-PLL-ODNs.

Distribution of asODNs in mice

Plasma level of asODNs declined rapidly after intravenous administration, with its half-life being approximately 1-2 min, and 7.6% of asODNs was left in circulation one hour later. Among organs examined, liver retained more asODNs (21.9%) 30 min after the administration, and the retained molecules decreased gradually, with 2.93% of them detected 24 h later. At the time point of 30 min, the retained radioactivity listed in the order of intensity was as following: liver > kidney > lung > heart > spleen > brain (Figure 3). 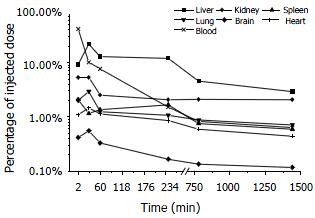 The elimination process of Gal-PLL-asODNs from bloodstream was similar to that of asODNs, with its half-life being 1-2 min. Less Gal-PLL-asODNs was shown to be retained in the circulation at the time points of 30 min (8.26%), 60 min (6.24%) than asODNs (10.17% for 30 min, 7.65% for 60 min) at the corresponding time points. Up to 52.14% of Gal-PLL-asODNs was shown to be in liver at the time point of 30 min, and only 5.99% of the activity was retained in liver 24 h after its administration. Kidney was the second radioactivity concentrating organ, retaining 5.89% of injected Gal-PLL-asODNs at the time point of 2 min. The amount in the brain was the smallest (Figure 4). In comparison to that for asODNs, more radioactivity for Gal-PLL-asODNs was retained in liver at each time points (Figure 5). Evidently, Gal-PLL had prompted hepatic intake of asODNs. It might enhance the preferential concentration of agent in liver, with a factor of 8.98-fold to kidney, 42.66-fold to lung, 54.24-fold to spleen. However, there were only few asODNs in liver for both groups 24 h later (5.99% and 2.93%, respectively). 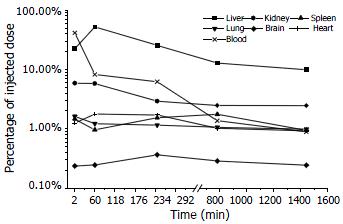 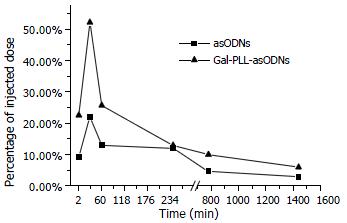 Figure 5 Comparision of the amount retained in liver between asODNs and Gal-PLL-asODNs (n = 2).
Inhibition of viral protein expression by antisense oligonucleotides in vivo

After treatment for 12 d, serum HBsAg decreased significantly in the Gal-PLL-PSODNs treated group (P < 0.01); in contrast, no apparent change was detected after treatment with HBV-unrelated Gal-PLL-ODNs (Table 2). In serum HBsAg level, as shown in Figure 6, serum HBV DNA turned negative in 4 of the 6 (66.7%) Gal-PLL-asODNs treated transgenic mice, but it remained unchanged in the control mice.

The 2.2.15 cells were shown to carry HBVDNA, being a useful model for screening of HBV-specific asODNs. Exonucleases and endonucleases were identified in serum, cells, and other body fluid, both being able to degrade ODNs. Nucleoside modifications may enhance the resistance of ODNs to nuclease digestion. Among them, phosphorothioate oligodeoxynucleotides were found to be more stable in cell culture medium, cells, the cell extraction, serum, tissue and urine. PSODNs, therefore, were used as a drug in this study.

Foreign DNA can be introduced into cells by transfection using several protocols, including electroporation, liposome and calcium phosphate-mediated procedure. In addition, some DNA delivery systems have been designed for binding foreign gene to target cells[14,15]. The DNA-carrier system consisting of an asialoglycoprotein (asialoorosomucoid, ASOR) covalently linked to poly-L-lysine has been used as a hepatotropic ligand to bring a foreign gene preferentially to hepatocytes via asialoglycoprotein receptors[16-23].

For this purpose, Gal-PLL was prepared in this laboratory previously. Its selective affinity to hepatocytes was demonstrated in vitro, proposed to be mediated by asialoglycoprotein receptors on hepatocytes membrane[24-30]. In this study, the optimized molar ratio 2:1 between Gal-PLL and ODNs was estimated to be 2:1, being in agreement with the reported data (17). Gal-PLL was also suggested to be useful as a liver-targeting plasmid DNA carrier in vivo[27,28,30,31]. This was approved in this study.

The distribution of different ODNs in vivo may vary with their length and sequence[32], and this shoud be clarified before gene therapy. More than a half of asODNs conjugated to Gal-PLL was shown to be retained in liver, being 2.38-fold of that to free asODNs. In order to avoid the possible interference by plasma HBV DNA in HBV infected animal, normal Kunming mice were used to explore the distribution of asODNs in vivo.

According to the data presented, Gal-PLL appears to be a more favorable hepatotropic ligand for gene delivery in vivo regarding its convenient preparation and stability, as compared to other compounds such as the well characterized tetra-antennary cluster galactoside L3 G4[33].

Considering the dynamic of asODNs, free or conjugated to Gal-PLL, asODNs in liver were 2.97% and 5.99%, respectively, 24 hrs after administration, the recommended drug injection interval was 24 h.

HBV transgenic mice were proved to be the suitable animal model for screening anti-HBV drugs[10,11,34,35,36]. In the present study, a pronounced inhibition was observed by Gal-PLL-asODNs treatment. In addition, serum HBVDNA turned negative in 4 of the 6 transgenic mice. These data show the potential application significance of Gal-PLL-asODNs as an anti-HBV agent.