AIM: To construct a recombinant strain which highly expresses catalase of Helicobacter pylori (H. pylori) and assay the activity of H. pylori catalase.

METHODS: The catalase DNA was amplified from H. pylori chromosomal DNA with PCR techniques and inserted into the prokaryotie expression vector pET-22b (+), and then was transformed into the BL21 (DE3) E. coli strain which expressed catalase recombinant protein. The activity of H. pylori catalase was assayed by the Beers&Sizers.

RESULTS: DNA sequence analysis showed that the sequence of catalase DNA was the same as GenBank’s research. The catalase recombinant protein amounted to 24.4% of the total bacterial protein after induced with IPTG for 3 hours at 37 °C and the activity of H. pylori catalase was high in the BL21 (DE3) E. coli strain.

Helicobacter pylori (H. pylori) is a bacillus first isolated from human gastric antral epithelium in 1982. It is recognized as a human-specific gastric pathogen that colonizes the stomachs of at least half of the world population[1,2]. H. pylori infection is the major cause of chronic gastritis and peptic ulcer[3-13], and is also closely related to adenocarcinoma of stomach and mucosa-associated lymphoid tissue (MALT) lymphoma and primary gastric non-Hodgkin’s lymphoma[14-32]. This organism was recently categorized as a class I carcinoma by the World Health Organization[33], and direct evidence of carcinogenesis was recently demonstrated in an animal model[34-36]. In addition, seroepidemiologic studies indicate that H. pylori infection is also associated with the occurrence of circulatory, respiratory and alimentary (except stomach and duodenum) system diseases and autoimmune diseases[37-41]. With discoveries that H. pylori may play an important role in many diseases, H. pylori is being studied thoroughly, especially the mechanism of escaping from host killing and clearing. Because of only escaping from host killing and clearing, H. pylori can locate in body steadily and cause diseases. The effect of catalase is emphasized increasingly in escaping from killing of host’s free radical and sustaining the balance of self-oxygen metabolism. No study in expressing high activity H. pylori catalase had been reported in China and abroad. In this study, PCR technology was performed to obtain catalase gene, and construct expressing vectors. The sequence analysis and activity detection were performed in order to obtain the clone, effective expression and activity evaluation of catalase gene, thus laying a good foundation for further studying the associated functions.

MATERIALS AND METHODS
Plasmids and strains and growth conditions

Plasmid pET-22b (+) was obtained from Novagen. Escherichia coli (E. coli) DH5α (Biodev) was used as a host for recombinant DNA manipulation, E. coli BL21 (DE3) was used for expression of the catalase gene. H. pylori was stored in this lab. E. coli was grown in Luria-Bertani medium containing 100 mg of ampicillin liter-1.

All restriction enzyme digestions, ligations and other common DNA manipulations, unless otherwise stated, were performed by standard procedures. The genome of H. pylori was prepared from the cells collected from the colonies on the agar plate. The gene of H. pylori catalase was amplified from the genome of H. pylori by PCR (Techne PROGENE) using the primers cat1 (5’-TGGCCATGGATGTTAATAAAGATGTGAAAC-3’) as upstream primer and cat2 (5’-AGTGCGGCCGCCTTTTTCTTTTTTGTGTG-3’)as downstream primer as described in the literature[42]. Cat1 and cat2 contained Nco I and Not I sites, respectively. The PCR product was recovered from agarose gel, digested with Nco I and Not I, and inserted into the Nco I and Not I restriction fragment of the expression vector pET-22b(+) using T4 DNA ligase. The resulting plasmid pET-CAT was transformed into competent E. coli BL21 (DE3) cells using ampicillin resistance for selection. The insert was confirmed using Xho I digestion to check for a 1.5-kb increase in size and Nco I and Not I digestion to show a 1.5-kb fragment.

Strain BL21 (DE3) BL21 (DE3) containing pET-22b(+)-CAT, was incubated overnight at 37 °C while shaking in 5 ml LB with 100 μg/mL ampicilline. Fifty mL LB was inoculated and the cells grew until the optical density at 600nm reached 0.4-0.6. Isopropyl-β-D-thiogalactopyranoside (IPTG) was added to a final concentration of 1 mM.

Catalase activity was assayed according to the modified method of Aebi. The assay was performed in a reaction mixture (1 ml) containing 10 mM H2O2 in 50 mM potassium phosphate buffer (pH7.0, buffer B) at 30 °C. The rate of disappearance of H2O2 was measured spectrophotometrically at 240nm using a Shimadzu UV-3000 spectrophotometer (Kyoto). One unit of catalase activity was defined as the amount of enzyme that decomposed 1 μmol H2O2 per minute under the assay conditions.

Induction of glycolate oxidase expression as a function of the concentration of IPTG: Seven flasks each with 50 mL medium containing 100 μg/mL ampicillin were inoculated with BL21 (DE3) carrying plasmid pET-CAT. At OD600 of 0.6, expression of CAT was induced with IPTG, of which the concentrations were 0, 0.1, 0.2, 0.4, 0.6, 0.8, 1.0 mM, respectively. After 5 hours the cells were harvested, crude extracts were compared by SDS-gel electrophoresis. CAT activity of the cells was determined as described above.

Induction of glycolate oxidase expression as a function of cell density: Three flasks each with 50 mL medium containing 100 μg/mL ampicillin were inoculated with BL21 (DE3) carrying plasmid pET-CAT. At OD600 of 0.4, 0.6 and 1.0, respectively, expression of CAT was induced with IPTG (final concentration 0.2 mM). After 5 hours cells were harvested, crude extracts were compared and CAT activity was determined as described above.

The H. pylori catalase gene was amplified by PCR using the H. pylori genome as the template and cloned into plasmid pET-22b(+). The recombinant plasmids pET-CAT were all digested by Xho I, and by Nco I and Not I simultaneously, then digestive products were visualized on 10 g·L-1 agarose gel electrophoreses (Figure 1). It demonstrated that recombinant plasmid contained the objective gene. The DNA sequencing proved that the entire sequence of the gene was consistent with the results reported before[42]. 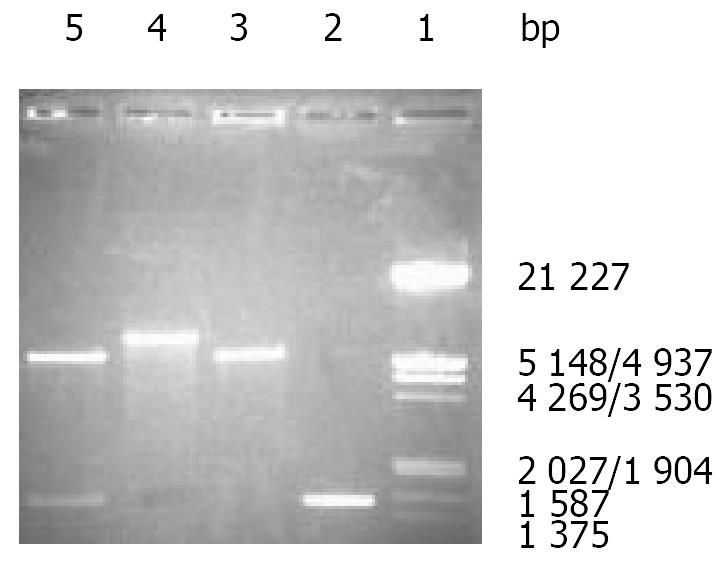 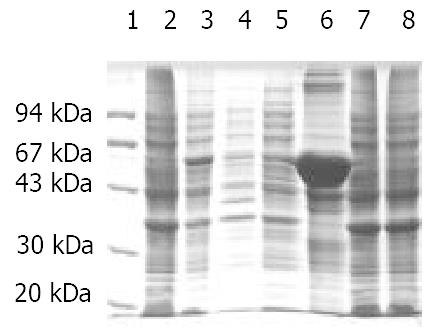 For a long time, people had presumed that transferring poisonous oxygen metabolite into nonpoisonous water, sustaining self-metabolite equilibrium and protecting H. pylori from the killing of neutrophilic leukocyte were the main functions of H. pylori catalase[43]. However, Bauerfeind et al[44] found that H. pylori catalase accounts only for 1.5%, while urease accounts for 10% of thallus’s gross protein at pH6 or 7. The activity of urease could not be detected at pH5. On the other hand, the activity of catalase is still sustained at pH3. This finding indicated that catalase may play a more important role than urease when H. pylori survives in an acid environment. In addition, recent studies found that catalase may play an important role in preventing H. pylori from bacillus to coccus[45-47].

Most interestingly, Radcliff et al[42] have suggested that the protective rate of natural catalase can reach 80%, while that of recombinant catalase can reach 90%, based on their animal experiments, which indicated that catalase is a new antigen for the preparation of H. pylori vaccine.

Overall, further studies on catalase are essential, in order to understand the effect of catalase on H. pylori mechanism of causing disease, as well as immune prevention and treatment. In this study, H. pylori catalase gene was cloned and inserted into fused cloning strain, which was demonstrated by catalase activity. An important experimental basis for further studies on mechanism of catalase causing disease, and immune protective effects has been laid.

Plasmid pET-22b(+) was a secretion vector and the foreign protein was transported into periplasm directed by the signal peptide Pel B. Soluble and functional expression of catalase was achieved by secreting the recombinant protein to periplasm, which provided an environment favorable for the folding of this protein. These may explain why the cloning strain has the high activity. The high activity of the cloning strain may provide better measures to treat diseases caused by free radicals, such as sequela radiotherapy on neoplasm, all kinds of phlogosis, several kinds of dermathosis, second perfusion in open cardiac operation and so on.