METHODS: Expressions of Bcl-2 and Bax were examined immunohistochemically in 27 cases of extrahepatic biliary tract carcinomas (bile duct carcinoma: n = 21, carcinoma of ampulla of Vater: n = 6), and 10 cases of atypical dysplasia. Five cases of normal biliary epithelial tissues were used as controls. A semiquantitative scoring system was used to assess the Bcl-2 and Bax reactivity.

Extrahepatic biliary tract carcinoma is a relatively rare disease[1], and its mortality is 5% of all deaths from malignant neoplasms in Japan[2] and its prognosis is poor[3,4]. Its pathogenic mechanisms remain unknown. Genetic and some risk factors contribute to its pathogenesis[1]. It has been suggested that invasive carcinoma of extrahepatic biliary tract is preceded by dysplasia[1,5], which provides a good model for the study of genetic abnormalities and neoplastic progression.

Genetic control of cell death (apoptosis or programmed cell death) and cell survival play a crucial role in tumor growth[6]. Among the molecules related to the apoptotic process, Bcl-2 family proteins are important and critical regulators in a variety of physiological and pathological contexts[6-10]. Bcl-2 and Bax are members of the Bcl-2 family. Bcl-2 prevents cells from death through a variety of mechanisms, whereas overexpression of Bax protein increases the susceptibility of cells to apoptosis[11]. Although Bax and Bcl-2 have different functions, they share similar structures. Bax is a homologue protein of Bcl-2 and possesses two conserved regions, BH1 and BH2 that appear to be important for Bax/Bcl-2 binding[10]. Bax and Bcl-2 may form homodimers (Bax/Bax, or Bcl-2/Bcl-2) or heterodimers (Bax/Bcl-2). The balance of Bcl-2 and Bax determines survival or death of cells exposed to apoptotic stimuli[12] and relates with chemotherapeutic response and prognosis in some diseases[11].

Pathological slides of surgically removed extrahepatic biliary tract carcinoma were retrieved from a database file at Department of Pathology, Suwa Red Cross Hospital, Nagano, Japan, from 1993 to 2000. The slides stained with hemaloxylin and eosin (H&E) were reviewed, and slides in 27 cases were selected for this study. These 27 cases composed of 21 biliary duct carcinomas and 6 carcinomas of ampulla of Vater. Histological criteria for diagnosis of dysplasia have been described[1], that is, dysplasia is characterized by cuboidal or columnar cells showing mild to moderate nuclear dysplasia, with or without pseudostratification, loss of polarity, and occasional mitotic figures. Slides in 3 cases had both dysplasia and carcinoma, and other 7 dysplasia lesions were obtained from the margins of malignant tissue. In all, dysplasia (Figure 1A) was observed in 10 (37.1%) of invasive carcinomas. As non-neoplastic controls, 5 cases of normal epithelial tissue adjacent to the lesions were used. The histopathological diagnosis was made according to literature[1] using the specimens stained with H&E. There were 17 cases of well-differentiated adenocarcinoma (17/27, 63.0%), 7 moderately differentiated (7/27, 25.9%), and 3 poorly differentiated (3/27, 11.1%). Clinical stages were determined according to Union International Centre le Cancer (UICC) classification[19]. The numbers of cases in stages I, II, III and IV were 4, 9, 10 and 4, respectively. 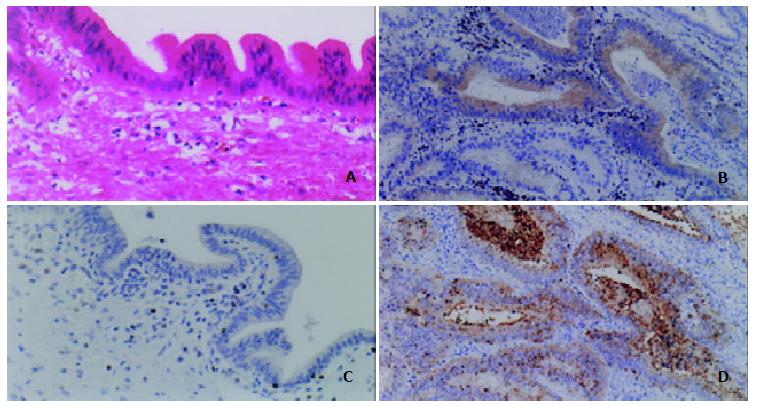 All specimens were fixed in 10% buffered formalin and embedded in paraffin. The deparaffinized sections were treated in 0.3% hydrogen peroxide in methanol for 30 min to eliminate endogenous peroxidase activity. Retrieval of antigenecity was performed by microwave. Slides were placed in 10 mmol/L citrate buffer (pH6.0), boiled for 15 min in a microwave oven, cooled for 15 min, and rinsed in distilled water. Anti-Bcl-2 antibody (Clone 124, DAKO Corporation, Glostrup, Denmark, 1:40 dilution) or anti-Bax antibody (Clone 4F11, immunotech, Marseille, France, pre-diluted) was applied and incubated for 1 h at room temperature. Each antigen was detected by LSAB-2 kit (DAKO) with 3,3’-diaminobenzidine and hydrogen peroxide and the sections were finally counterstained with hematoxylin. For positive controls, mature lymphocytes in the sections were stained positively for Bcl-2 and neutrophils for Bax.

The results of Bcl-2 and Bax immunostains were scored as described previously[20]. The percentage of positive tumor cells was graded as follows: 0: 0%, 1: 1%-25%, 2: 26%-50%, 3: more than 50%. Immunostaining intensity was rated as follows, 0: none, 1: weak, 2: moderate, 3: intense. When a score of intensity multiplying percentage of positive cells is equal to or more than 1, the specimen was considered as immunopositive. Only cytoplasmic staining was evaluated and nuclear reaction was interpreted to be nonspecific staining.

The results of immunostaining are shown in Table 1.

Significant Bcl-2 protein expression was observed in 9 out of 21 (42.9%) bile duct carcinomas and 1 out of 6 (16.7%) carcinomas of ampulla of Vater. The immunoreactive cases showed diffuse cytoplasmic staining (Figure 1B). There was no significant difference according to the primary site of carcinoma (P = 0.363). On the other hand, only one case out of 10 dysplasia was stained (Figure 1C). Although there was an increasing tendency of Bcl-2 positive cases from normal to dysplasia and carcinoma, no statistical significance was observed among these three groups (P = 0.110).

For Bax expression, the positive cases showed a granular cytoplasmic staining pattern. The positive rate of Bax expression was 17 out of 21 (81.0%) cases of bile duct carcinoma (Figure 1D) and 3 out of 6 (50.0%) carcinomas of ampulla of Vater, without statistical significance (P = 0.290). Bax was positively stained in 3 out of 10 cases of dysplasia, and 2 out of 5 normal epithelia. There was a significant difference among these three groups (P = 0.038), the Bax expression in invasive carcinoma was more obvious than that in dysplasia and normal group when further compared (P = 0.012).

The results are shown in Table 2.

Out of 27 specimens with invasive carcinoma, the positive rate of Bcl-2/Bax expression was higher in well differentiated type than in poorly differentiated one, and higher in cases without invasion of vessels and lymph nodes than in those with tumor invasion with statistical significance, and higher in cases at stages I and II than in those at stages III and IV without statistical significance.

Our study also showed that Bcl-2 protein expressed in 10% biliary dysplasia, and no expression of Bcl-2 in 5 normal biliary epithelial cells. These findings were consistent with the results described by Okaro et al[14]. Bax protein expression rate was 30% in dysplasia and 40% in normal biliary epithelium. Incidence of Bcl-2 and Bax expression in invasive carcinoma was higher than that in dysplasia and normal tissue. Expression of Bax but not Bcl-2 showed a statistically significant difference among the malignant tissue, peri-cancerous tissue and normal one. Previously we demonstrated that Bcl-2 expression in premalignant lesions was an early event in the carcinogenesis of colorectal, gastric and cervix glandular tumors[27]. However, this was not true for biliary tract tumors. Bcl-2 and Bax might play some roles in the development from dysplasia to carcinoma. As the number of cases in each group was too small for statistical analysis, further studies are needed.

The ratio of anti-apoptotic to pro-apoptotic Bcl-2 family proteins appeared to control the relative sensitivity or resistance of many types of cells to apoptotic stimuli[15]. In our study, Bcl-2 expression was related to Bax protein expression in malignant, dysplasia and normal lesions. This finding was consistent with the conclusion of Harada et al[28], and supported that Bcl-2 and Bax were involved in the apoptotic activity in the development of extrahepatic biliary tract carcinomas as a couple of contrary functions.

There was a tendency that the low expression of Bcl-2/Bax was found in less differentiated and more advanced cases with metastasis of lymph node and perineural and vascular invasion, although statistical analysis revealed no significance. The impact of Bcl-2 expression on clinical outcome was demonstrated by Ito et al[29], who showed that Bcl-2 expression was inversely related to the incidence of apoptosis, and that Bcl-2 expression was more frequently absent in cases of advanced stages, lymph node metastasis, and perineural invasion (inverse relationship). On the other hand, previous study showed that Bax expression might be involved in tumor differentiation/histological types and metastatic progression in colorectal cancer[30], no reports on Bax expression/Bcl-2 in extrahepatic biliary tract tumor has been published yet. The study could not show any distinct correlation between Bcl-2/Bax expression and clinical stage or aggression, and a larger number of cases may be required to clarify this issue.