AIM: To characterize the alteration and significance of p53 and PCNA in cancer and adjacent tissues of concurrent cancers from the esophagus and gastric cardia in the same patient.

RESULTS: In CC patients, both esophageal squamous cell carcinoma (SCC) and gastric cardia adenocarcinoma (GCA) tissues showed different positive immunostaining extent of p53 and PCNA protein (P > 0.05). The positive immunostaining rates for p53 and PCNA were 60% (15/25) and 92% (23/25), respectively in SCC; and 40% (10/25) and 88% (22/25), respectively in GCA. “Diffuse” immunostaining pattern was frequently observed in both p53 and PCNA. High coincidence rates for p53 and PCNA positive staining were observed in SCC and GCA from the same patients, and accounted for 56% and 96%. In SCC patients, with the lesions progressed from normal esophageal epithelium (NOR) to basal cell hyperplasia (BCH) to dysplasia (DYS) to carcinoma in situ (CIS) to SCC, the positive rates for p53 were 27%, 50%, 50%, 29% and 72%, and 55%, 70%, 75%, 71% and 93% for PCNA, respectively. In GCA, with the lesions progressed from normal gastric cardia epithelium to DYS to CIS to GCA, the positive rates of p53 expression were 44%, 27%, 22% and 36% respectively, the difference was not significant; the positive rates of PCNA protein expression were 67%, 64%, 67% and 86%, respectively. The χ2 test, Fisher’s Exact Test, Mantel-Haenszel χ2 Test and Kappa Test were used for the statistics.

CONCLUSION: The high coincident alterations for P53 and PCNA in SCC and GCA from the same patient indicate the possibility of similar molecular basis, which provides important molecular basis and etiological clue for similar geographic distribution and risk factors in SCC and GCA.

Esophageal squamous cell carcinoma (SCC) and gastric cardia adenocarcinoma (GCA) are the two most frequent malignant diseases in the world[1-3]. SCC is characterized by its remarkable geographic distribution; the ratio between the incident rates of high- and low-risk areas can be as high as 500:1. Consistent geographic distribution with SCC in the same high-incidence area (HIA) is the remarkable epidemiological characteristic of GCA[3], and in America and Europe the incidence of GCA increased dramatically in recent decades[4-8]. Linzhou and the nearby counties in Henan province, have the highest incidence and mortality for SCC and GCA in the world, SCC and GCA remain the leading cause of cancer-related death in these areas[9].

It is noteworthy that the concurrent cancers from esophagus and gastric cardia in the same patient (CC) is not uncommon in this area, with an incidence of 0.4-2.5%[10-13]. This special pattern indicates that there may be same or similar risk factors and mechanism involved in the carcinogenesis. The molecular mechanism of SCC/GCA is still not clear, and the information from the concurrent cancers of SCC & GCA in the same patient in the HIA is very limited. It is apparent to further characterize the molecular changes of CC patients may provide not only more information on the molecular mechanism but also the etiological clues for SCC and GCA.

Recent studies indicate that esophageal and gastric cardia carcinogenesis is a mulitistep progressive process involving multiple genetic changes (accumulation or overlap). The accumulation of p53 protein and p53 gene mutation were observed in the very early stage of esophageal carcinogenesis, even in the microscopically normal esophageal epithelium, with positive immunostaining and mutation rates increasing with the progression of lesions[14-24]. In addition, recent study showed that PCNA protein overexpression was also observed in the carcinogenesis of GCA[25].

To elucidate the molecular mechanisms of SCC/GCA carcinogenesis and to expand the knowledge for early detection of SCC/GCA and screening high-risk population, the present study was undertaken to analyze the alternations of p53 and PCNA in cancer tissues and adjacent cancerous tissues with different degrees of precancerous lesions in CC patients.

Twenty-five cases with concurrent cancers of SCC and GCA enrolled in this study were from Linzhou City Hospital, Yaocun Esophageal Cancer Hospital and Anyang City Tumor Hospital, the high-incidence area for EC, including 16 males and 9 females, with a mean age of 59 (59 ± 9.88) in male and 60.6 (60.6 ± 11.44) in female. None of these patients received any treatment of chemotherapy or radiotherapy before operation. All the resected tissues and biopsied tissues were fixed with 85% alcohol, embedded with paraffin and serially sectioned at 5 μm. The sections were mounted onto the histostick-coated slides. Four or five adjacent ribbons were collected for histopathological diagnosis (hematoxylin and eosin stain) and immunohistochemical staining.

Histopathological diagnosis for esophageal and gastric cardia epithelia was based on the changes in cellular morphology and tissue architecture using previously established criteria[26-32]. The normal esophageal epithelium (NOR) contained 1 to 3 basal-cell layers; the papillae were confined to the lower half of the epithelium. In basal cell hyperplasia (BCH), the number of proliferating basal cells was increased to more than 3-cell layers. Dysplasia (DYS) was characterized by the partial loss of cell polarity and nuclear atypia. SCC was characterized by confluent and invasive sheets of cohesive, polymorphous cells with hyperchromatic nuclei. The following histopathological classification was used for the gastric-cardia epithelia: dysplasia (DYS), neopastic features including nuclear atypia and/or architectural abnormalities confined to the gastric epithelium, without invasion; GCA: invasion of neoplastic gastric cells through the basement membrane. The diagnosis of CC was based on the following criteria: (1) the tumors must be clearly separated on histological phenotype; (2) the tumors must be malignant; (3) Metastasis must be excluded.

Anti-p53 antibody is a monoclonal mouse anti-serum against p53 of human origin, and recognizes both wild and mutant type p53 (Ab-6, Oncegen Science, Manhasset, NY). Anti-PCNA antibody is a monoclonal mouse anti-serum against PCNA of human origin (Mab, DAKO, Carpinteria, CA). The avidin-biotin-peroxidase complex method was used for the immunostaining of p53, PCNA. In brief, after dewaxing, inactivating endogenous peroxidase activity and blocking cross-reactivity with normal serum (Vectastain Elite Kit; Vector, Burlingame, CA), the sections were incubated overnight at 4 °C with a diluted solution of the primary antibodies (1:500 for p53 and 1:200 for PCNA). Location of the primary antibodies was achieved by subsequent application of a biotinylated anti-primary antibody, an avidin-biotin complex conjugated to horseradish peroxidase, and diaminobenzidine (Vectastain Elite Kit, Vector, Burlingame, CA). The slides were counter-stained by hematoxylin. Negative controls were established by replacing the primary antibody with PBS and normal mouse serum. Known immunostaining-positive slides were used as positive controls.

Specific staining for each protein was categorized as either positive or negative based on the presence of brown coloration staining. More than 10% positively stained cells were graded as positive[33,34]. Clear staining for nuclei was the criterion for a positive reaction. Immunostaining patterns[26] were graded into the “focus”, “scattered”, “diffuse”, according to cell distribution in one microscopic eyeshot (× 40). All the immunostaining slides were observed by two pathologists independently. The slides with different diagnosis by two pathologists were reviewed again (less than 5%) until the agreed diagnosis was made.

Histopathologically, primary SCC and GCA in the same patient were verified in all 25 cases by two pathologists using an Olympus microscope independently. Of the 14 CC patients (both with cancer and adjacent tissues) examined, in esophagus 11 samples were diagnosed as normal, 10 as BCH, 8 as DYS, 7 as CIS and 14 as SCC; in gastric cardia 9 as normal, 11 as DYS, 9 as CIS and 14 as GCA. 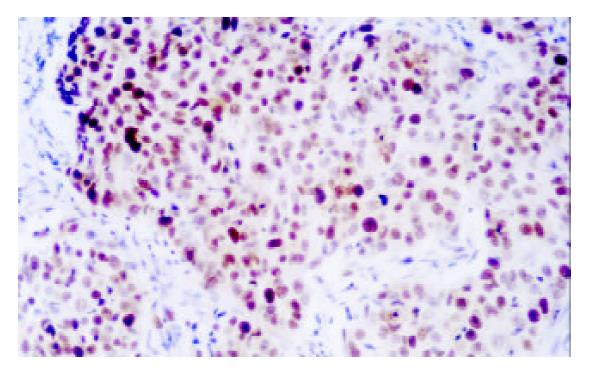 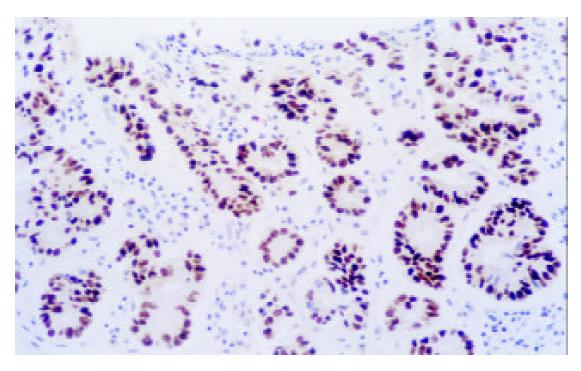 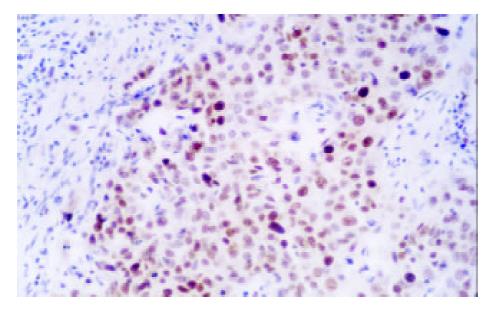 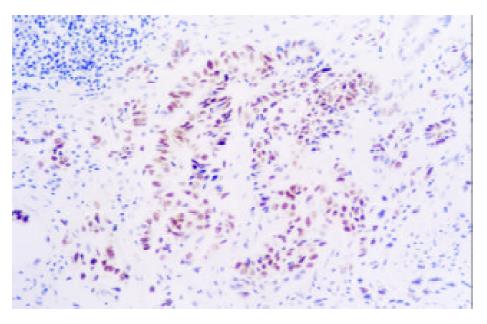 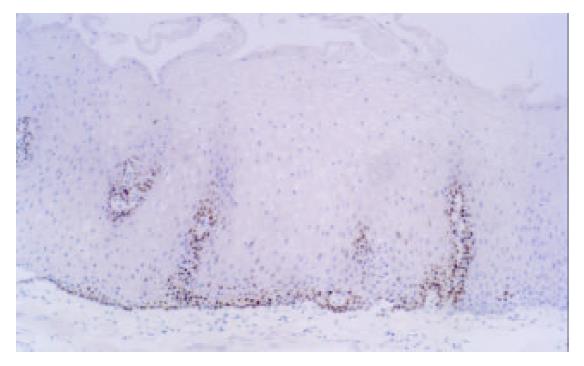 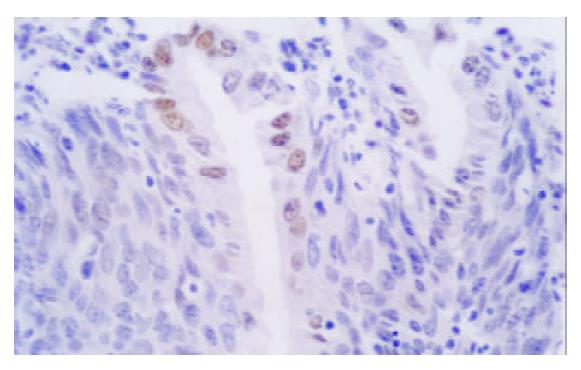 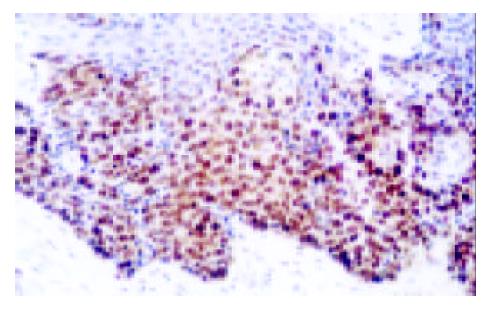 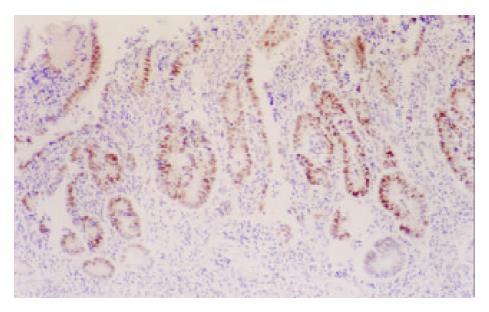 In this study, indistinguishable overexpressions of p53 and PCNA protein and the same main immunostaining pattern (Diffuse) of immunoreaction were observed in primary SCC and GCA from the same patient. We also found that in CC patient p53 and PCNA had high coincident alteration in both SCC and GCA. These results indicated that SCC and GCA in the same patient might have the similar molecular basis and mechanism of carinogenesis. These results might be a molecular explanation of the consistent geographic distribution of SCC and GCA. That further characterized the molecular alterations in different stages of SCC and GCA and their relations with morphological changes would provide more information to elucidate the carcinogenesis of SCC and GCA. In this study, high PCNA positive staining rates were observed in CC patient, both in esophageal and gastric cardia epithelia. It inferred that in this high-incidence area, the alimentary canal of patients exposed to similar risk factor might lead the esophageal and gastric cardia epithelial cells to become the hotspot of hyperliferation, which might be a molecular evidence of hypothesis of field cancerization[35,36]. The hypothesis of field cancerization is an explanation of multiple primary malignant neoplasms, which consider the tissues of similar architecture exposed to similar pathogen might occur independently as precancerous lesions in multiple sites of the organ.

It is very important for the diagnosis of CC and multiple primary SCC/GCA to exclude local metastasis. In this study, microscopic observation showed that mixed of SCC and GCA tissue was observed occasionally in some patients, and the tissues adjacent to SCC and GCA had different patterns of precancerous lesions, which were characterized by either isolated or in succession. These unique information provided important clues to study the molecular basis of SCC/GCA carcinogenesis and sensibility.

Through the contrast study of adjacent cancerous tissues of SCC and GCA, we found that different extent of overexpressions of p53 and PCNA were already observed in the apparently normal epithelia and very early precancerous lesions of esophagus and gastric cardia. Especially, from normal epithelia (NOR) to different precancerous lesions to SCC, of both p53 and PCNA protein positive staining rate increased accordingly in the esophagus, and PCNA increased in gastric cardia, but did not show the tendency of increase. Other researchers’ results showed that from NOR to precancerous lesions to SCC/GCA, positive staining of p53 and PCNA showed a continuous increasing tendency[14,25,37-44]. So the explanation of our result might be that IHC qualitative analysis cannot reflect the number of immunostaining cells, and only show the alteration of immnostaining rates. The use of quantitative analysis may solve this problem. In this study we also found that in the stage of CIS, both esophagus and gastric cardia tissues showed a decrease of positive staining rate of p53. It might due to that precancerous lesions have an instable characteristic of bidirectional development, that is, in the multistage progression course of carcinogenesis precancerous lesions might progress to cancer, or reverse to low-grade lesion or even normal[14]. These results inferred that the molecular changes of SCC and GCA not only were similar in the ultimate stages but also in the early stages, so the CC patient might have similar carcinogenetic course in primary SCC and GCA, but their precise mechanism and biological significance need further study.