The shortage of donor organs remains a major obstacle to the widespread application of liver transplantation in patients with end-stage liver disease. Although split grafting was used to increase the number of donor livers, the accelerated rejection induced by liver regeneration[1,2] can interfere with the outcome of these liver grafts. Therefore, It is important to investigate the mechanism responsible for the accelerated rejection of split liver grafting.

After organ transplantation, interstitial donor dendritic cells (DCs) migrate to recipient lymphoid tissue. In the case of experimental skin, heart, or kidney allografts, these cells have been implicated as the principal instigators of rejection. Despite similar patterns of donor DCs migration, liver grafts are accepted without immunosuppressive therapy between MHC-mismatched mouse, and certain rat strains, and induce donor-specific tolerance. These phenomena and the persistence of donor hematopoietic cells, including DCs, in successful, long-term graft recipients, have raised important questions about the possible role of donor DCs in liver transplant tolerance. The capacity of DCs to initiate immune responses is determined by their surface expression of MHC gene products and costimulatory molecules (CD40, CD80 and CD86), and the secretion of the immune regulator, interleukin (IL)-12[3-12]. Immature DCs resident in nonlymphoid tissues such as normal liver are deficient at antigen capture and progressing[3,13], whereas mature DCs, resident in secondary lymphoid tissues, are potent antigen-presenting cells, which can induce naive T-cell activation and proliferation[3-7]. Immature DCs that express surface MHC class II, but that are deficient in surface costimulatory molecules, can induce T-cell hyporesponsiveness[13-15] and inhibit immune reactivity[16,17]. It has been observed that liver-derived[13,18] or bone marrow-derived immature DCs[17], propagated in vitro and lacking surface costimulatory molecules, can prolong heart or pancreatic islet allograft survival. Whereas, marked augmentation of DCs numbers and maturation of DCs in liver allografts by donor treatment with the hematopoietic growth factor fms-like tyrosine kinase 3 (Flt3) ligand (FL) results in acute liver graft rejection[19,20].

One hundred male LEW rats and one hundred male SD rats weighing 220-300 g were used in all the experiments. Allogeneic whole and 50% partial liver transplantation were performed using a combination of SD rats to LEW rats. The animals were purchased from Chinese Academy of Science and Sichuan University. They were maintained with a 12-h light/dark cycle in a conventional animal facility with water and commercial chow provided ad libitum, with no fasting before the transplantation.

All operation were performed under ether anesthesia in clean but not sterile conditions. All surgical procedures were performed from 8 a.m. to 5 p.m. Donors and recipients of similar weight (± 10 g) were chosen. Liver reduction was achieved by removing the left lateral lobe and the two caudate lobes, which resulted in a 50% reduction of the liver mass. Whole liver transplantation (WLT) and partial liver transplantation (PLT) were performed with the two-cuff method described by Kammada and Calne[21], Knoop et al[22] and Uchiyama et al[23]. Briefly, the whole and partial liver were perfused with 20 ml of chilled lactated Ringer’s solution containing 200 U of heparin through the aorta. The liver was removed and immersed in chilled University of Wisconsin solution. Immediately after cuffs were placed on the portal vein and the infrahepatic vena cava, the liver graft was perfused with 8 ml of chilled University of Wisconsin solution through the portal vein and 2 ml of the same solution through the hepatic artery, and then the hepatic artery was ligated. Cold preservation time was approximately 1 h in all experiments. After a total hepatectomy was performed in the recipient, the suprahepatic vena cava was anastomosed in a continuous fashion with 8-0 sutures. The portal vein and infrahepatic vena cava were then connected by a 6-FG and 8-FG polyethylene tube cuff, respectively. The bile duct was internally stented with a 22-gauge i.v. catheter. The portal vein was clamped for < 18 min in all animals. In each group, the survival rate after grafting was > 89% at 24 h after surgery. Deaths that occurred within this period were defined as resulting from technical failure. Penicillin was given perioperatively.

Part of liver graft tissues 4 d after transplantation were sectioned and preserved in 10% Formalin, embedded in paraffin, cut with microtome, and stained with hematoxylin and eosin.

DCs from liver graft 0 h and 4 d after transplantation were propagated in GM-CSF from nonparenchymal cells (NPC) isolated from collagenase-digested liver graft tissue, as described by Lu[18]. Nonadherent cells, released spontaneously from proliferating cell clusters, were collected after 4 d’ and 10 d’ culture, and purified by centrifugation 500 × g, 10 min at room temperature on a 16% w/v metrizamide gradient (DC purity 80%-85%).

Morphological and Phenotypical features of DCs

Morphological characteristics of DCs derived from liver graft were observed by electron microscopy. Expression of cell surface molecules was quantitated by flow cytometry as described by Mehling et al[4]. Aliquots of 2 × 105 DCs propagated for 10 d in vitro were incubated with the following primary mouse anti-rat mAbs against OX62, CD40, CD80, CD86 (Serotec, USA), or rat IgG as an isotype control for 60 min on ice (1 μg/ml diluted in PBS/1.0% FCS). The cells were washed with PBS/1.0% FCS and labeled with FITC-conjugated goat anti-mouse IgG, diluted 1/50 in PBS/1.0% FCS for 30 min on ice. At the end of this incubation cells were washed, PBS were added, and the cells were subsequently analyzed in an FACS-4200 flow cytometer (Becton-Dikison, USA).

Semiquantitative RT-PCR for expression of IL-12R mRNA in DCs

Analysis of expression of IL-12Rβ1 and IL-12Rβ2 mRNA was determined by reverse transcription-PCR (RT-PCR) amplification in contrast with house-keeping gene GAPDH. Total RNA from 1 × 107 DCs propagated for 10 d in vitro was isolated using TripureTM reagent (Promega, USA). First-strand cDNA was transcribed from 1 μg RNA using AMV and an Oligo (dT15) primer. PCR was performed in a 25 μL reaction system containing 10 μL cDNA, 2 μL 10 mM dNTP, 2.5 μL 10 × buffer, 2.5 μL 25 mmol·L-1 MgCl2, 2 μL specific primer, 5 μL water and 1 μL Taq. IL-12Rβ1 and IL-12Rβ2 were amplified using specific primer for IL-12Rβ1[24] and IL-12Rβ2[25]. Specific primers for GAPDH[26] were also used for control. Thermal cycling of IL-12Rβ1 and IL-12Rβ2 and GAPDH primers were performed as follows[25]: denaturation at 94 °C for 1 min, annealing at 55 °C for 1 min, and extention at 72 °C for 1 min, all cycling were performed for 35 cycles. The predicted PCR product size were 331 bp for IL-12Rβ1, 1200 bp for IL-12Rβ2 and 576 bp for GAPDH. PCR products of each sample were subjected to electrophoresis in a 15 g·L-1 agarose gel containing 0.5 mg·L-1 ethidium bromide. Densitometrical analysis using NIH image software was performed for semiquantification of PCR products, and the expression level of each sample were expressed by IL-12R mRNA/GAPDH mRNA (%). 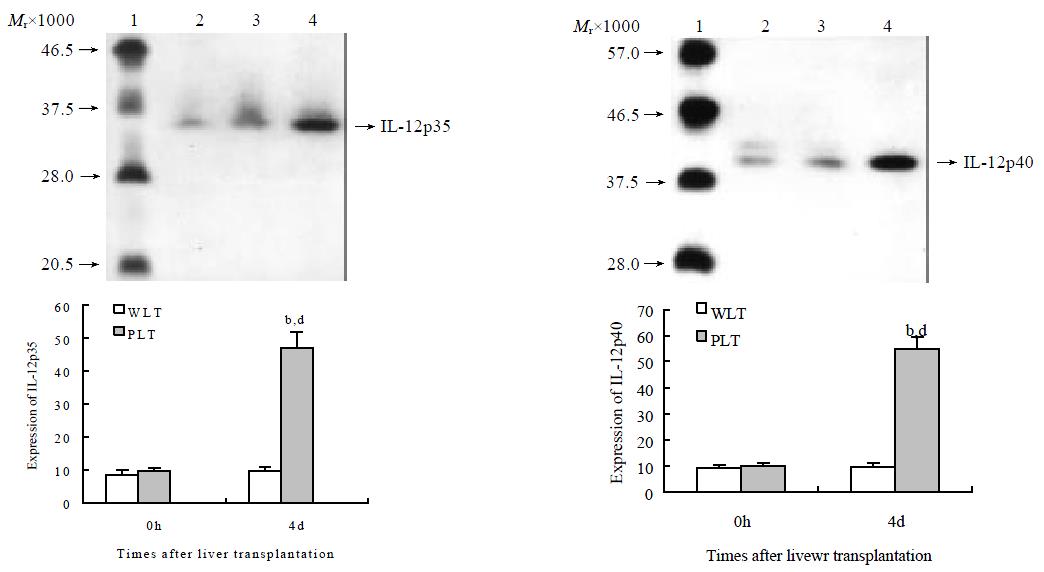 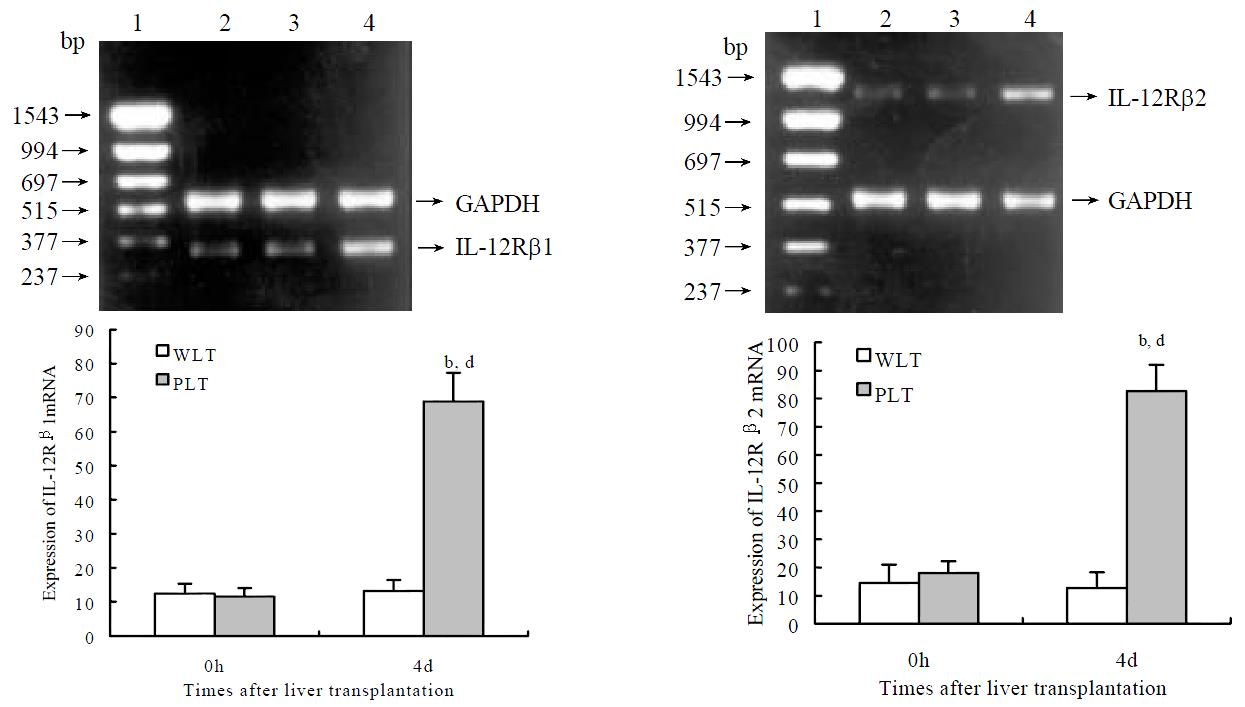 DCs play critical roles in the initiation and modulation of immune responses[27-34]. After vascularized organ transplantation, donor passenger leukocytes (mainly interstitial DCs) are mobilized out of the graft via peripheral blood to the recipient lymphoid and nonlymphoid tissues[35-39]. Maturation of donor DC from thyroid, pancreatic islet, skin, or kidney allografts in recipient lymphoid organs lead to the activation of naive, alloreactive Th0 lymphocytes, and thus provides the primary stimulus for acute allograft rejection. However, in mouse and certain rat strain combinations, fully MHC-mismatched liver allografts accepted without any of immune suppression, and fail to elicit an effective rejection response[38,39]. Moreover, in humans, the liver is considered the least immunogenic of transplanted whole organs. In a tolerant rat strain combination, depletion of interstitial leukocytes from liver by pretransplant donor radiation prevents the tolerogenic effect, and results in acute rejection[40]. On the other hand, it has been reported that immature, costimulatory molecule-deficient DCs (such as normal liver or bone marrow-derived DCs) propagated in vitro can promote graft survival in allogeneic recipients[14,41,42], and posttransplant administration of donor leukocytes induces long-term acceptance of liver transplants[43].

Therefore, passenger leukocytes (most likely DCs) may have a dualistic role with potential to elicit T cell activation and graft rejection, or induce T cell tolerance and graft acceptance. The sustained release from the transplanted liver of immature DCs, may contribute to allogeneic liver graft tolerance induction. These liver-derived DCs migrate in vivo to T cells areas of secondary lymphoid tissue, where they persisted for weeks in allogeneic recipients[18,44]. It is accepted that alloantigen-specific Th1 cells initiate allograft rejection, and that Th2 cells exert an inhibitory influence on the development of Th1 clones. It has been proposed that preferential induction of alloantigen-specific Th2 lymphocytes could suppress the development of Ag-specific Th1 cells, and as a consequence, inhibit allograft rejection. Liver-derived DCs might induce the proliferation of Th2 clones with capacity to inhibit Th1 responses[18]. Liver-derived DCs display an immature phenotype with absence of costimlatory molecules (CD40, CD80 and CD86) surface expression, low levels of MHC classIandII, and as a consequence, low stimulatory capacity for naive allogeneic T cells. Unlike mature DC, these liver-derived DCs do not induce detectable levels of intracytoplasmic IFN-γ in allogeneic CD4+ cells in 72-h MLR, and elicited very low levels of CTLs in vitro[3,13,18]. In contrast, acute liver graft rejection would be induced by maturation of liver grafts derived-DCs[20]. These findings point to a pivotal role for donor immature or mature DCs in determining the outcome of liver transplantation. Mature DCs express high levels of costimulatory molecules such as CD40, CD80 and CD86. Activation of T cells by mature DCs has been shown to require direct contact between T cells and DCs through CD40-CD40L interaction[45], upon ligation of CD40L on T cells with CD40 on DCs, DCs are triggered to produce even high quantities of IL-12, thus consigning T cells to Th1 responses[46].