AIM: To estimate the effect of a therapeutic vaccine against pancreatic carcinoma based on dendritic cell (DC) vaccine modified with tumor lysate and Interleukin-18 gene.

Because of the lack of methods for early diagnosis and the limited effects of surgical treatment, chemotherapy and radiation therapy, about 98% of the patients with pancreatic carcinoma don't live more than 5 years[1-4]. So we clearly need the new therapies to improve the prognosis of the patients with pancreatic carcinoma. Immunotherapy is moving close to become a promising approach of anticancer therapy as it has fewer side effects and, more importantly, the opportunity to generate long-term immunity[5-7]. Dendritic cell (DC) is highly effective antigen presenting cell (APC) with the unique capability of inducing primary immune response against tumor-associated antigens. Animal studies have shown that the DC vaccine pulsed with tumor antigen could elicit specific T-cell response against tumor[8-12]. Recently, Geiger et al[13] reported that they have completed the first phase trial of tumor lysate-pulsed DC vaccine in the therapy of pediatric solid tumor, including osteosarcoma and fibrosarcoma, which were partial or complete regression.

In this study, an in vivo model to estimate the effect of a therapeutic vaccine against pancreatic carcinoma based on DC vaccine modified with tumor lysate and Interleukin-18 gene was designed. We hope those results should provided a scientific basis for our next step, clinical trials, in the future.

The mice model of pancreatic carcinoma The membrance and partial parenchyma of BALB/c mice's pancreas were opened about 1 mm depth and the DMBA (7 mg) was put into there, as previously described[21]. After 3-4 mo, the mice developed pancreatic ductal adenocarcinomas with glandular duct-like distribution of cancer cells. The tumors from mice's pancrease were removed, carefully detached with a cell scraper, washed twice in PBS, and resuspended at a density of 2 × 107/mL in serum-free medium.0.5 mL (2 × 107/mL) viable tumor cells were injected into the left flank of BALB/c to develop the mice model of pancreatic carcinoma.

DC pulsed with tumor lysate Pancreatic carcinoma cells from the fresh solid tumor of mice were incubated with 0.01% EDTA-solution for 10 min, washed twice in PBS, and resuspended at a density of 5 × 106/mL in serum-free medium. The cell suspensions were frozen at -80 °C (2 min) and thawed in 37 °C water (4 min), which were disrupted by four freeze-thaw cycles. For the removal of crude debris, the lysate was centrifuged for 10 min at 300 × g. The supernatant was collected and passed through a 0.2-um filter for later use. Dendritic cells (DCs) were incubated with tumor lysates at a ratio of three tumor cells equivalents to one DC (i.e., 3:1) in CM. After 18 hr of incubation, DCs were harvested, washed twice in HBSS, and resuspended in HBSS for further study.

Cell transfection A recombinant adenoviral vector encoding IL-18 gene termed pCR3.1-IL-18 was kind gift from Dr. Chemen Ye (Immunology, Paris, France). For the transfection, DC and DC pulsed with tumor lysates were washed twice in HBSS, and incubated at 37 °C with the adenoviral vectors, respectively. Virus was used at a dose of 100 multiplicity of infection (MOI). Under these conditions, more than 80% of DCs were infected.

Immunological protection of DCs vaccine 30 BALB/c mice were at random divided into five groups and were immunized s.c. in the right flank with DC-IL18-Lysate, DC-Lysate, DC-IL18, DC, PBS, respectively, twice at 7 d (described above). These mice were challenged 7 d after the last immunization with 0.5 mL (1 × 107/mL) viable tumor cells from mice pancreas by s.c. in the left flank. The development of pancreatic carcinoma was observed in every mice.

Immunotherapeutic effect of DCs vaccine 30 mice from the mice model of pancreatic carcinoma with average tumor size 0.3 × 0.5 cm2 were at random divided into five groups (described above), which were respectively injected in the right flank with 2 × 104 DC-IL18-Lysate, DC-Lysate, DC-IL18, DC, PBS, respectively, twice at 7 d. The size of the tumors was recorded twice weekly by measuring the largest perpendicular diameters (PD) and transverse diameter (TD) with calipers. The weight of the tumor was calculated by the formula[(PD × TD2)/2].

Cytokine analysis After 7 d of the mice with pancreatic carcinoma immunized (described above), serum was obtained from the carotid artery of mice. The concentration of IL-18 and IFN-γ in the serum were measured by ELISA.

Data were expressed as the mean ± SEM and were analyzed by t test or ANOVA. Differation were considered significant when P was < 0.05. Tests were performed using SAS (Statistical Analysis Software). 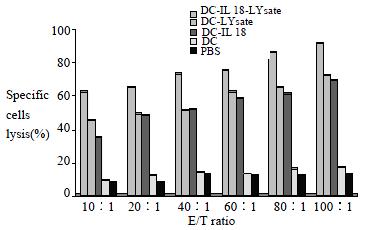 Figure 1 T cells were tested for cytolytic activity in a standard 4-h 51Cr-release assay. Effector-to target (E/T) ratio were from 20:1 to 100:1.
Cytokine analysis 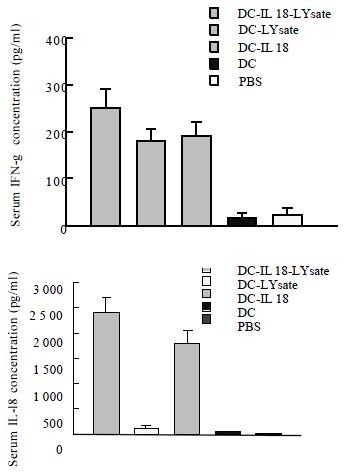 Figure 2 A, B The concentration of IL-18 and IFN-γ in the serum were measured by ELISA
Immunological protection of DCs vaccine 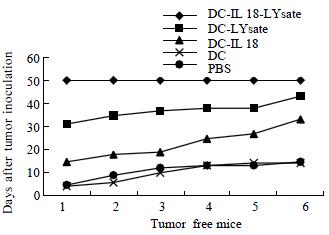 Dendritic cells (DCs) play an important role as primary antigen-presenting cell to initiate and maintain T-cell responses[23-25]. In our study, we designed an in vivo model to estimate the effect of a therapeutic vaccine against pancreatic carcinoma based on DCs modified with tumor lysate and Interleukin-18 gene. It was observed that DCs were pulsed with tumor lysate could obviously increase the efficiency against the pancreatic carcinoma cells.

At present, potential targets for the immunotherapy of pancreatic carcinoma are antigens such as carcinoembryonic antigen[26], HER-2/neu[27], mutant ras[28], p53[29]. However, vaccinating a single antigen has disadvantages, because it is unknown which of the identified antigens was the potential to induce an effective antitumor immune response. Furthermore, immunity against a single antigen maybe ineffective in tumors with pancreatic carcinoma and carries the risk of inducing tumor antigen escape variant[30,31]. In addition, this strategy is restricted to those patients with a specific HLA type.

In our research, we selected the tumor lysate as the target antigent because these unfractionated tumor-derived antigens could circumvent these disadvantages. Tumor lysates contain multiple known as well as unknown antigens that could be presented to T cells by MHC class I- and class II-pathways[32-35]. Therefore, lysate-load DCs are more likely to induce a polyclonal expansion of T cells, including MHC class II restricted T-helper cells. These have been recognized to play an important role in the activation of CTLs, which were probably the most important cells in antitumor immune response. The generation of CTL clones with multiple specificities may be an advantage in heterogeneous tumors and could also reduce the risk of tumor escape variants. Furthermore, lysate from the autologous tumor can be used independently of the HLA type the patient. A major drawback of unfractionated tumor antigens is the possibility of inducing an autoimmune reactivity to epitopes that are shared by normal tissues[36]. However, in clinical trials using lysate as the source of antigen, no clinically relevant autoimmune responses were detected[37-44].

IL-18 is a recently discovered cytokine cloned from mice with fluminant hepatitis induced by challenge with propionibacterium acnes and subsequent administration of LPS[14]. IL-18 lacks a signal sequence and is processed into the mature form by an IL-1β-converting enzyme (ICE)[15]. IL-18 is produced by cells of monocyte lineage, augments NK cytolytic activity, and enhances proliferation of T cells. IL-18 also promotes NK and T cells to secrete IFN-γ and GM-CSF. Based on those findings, IL-18 was demonstrated to confer a superior antitumor activity in some murine tumor systems. However, the systemic administration of recombinant IL-18 proteins, though effectively inhibited the tumor growth, resulted in death of all animals because of toxicity[45-47]. Systemic administration of IL-18 also was associated with severe dose-dependent toxicity in patient during the first human trial. The transfer of cytokine genes may circumvent the toxicity of systemic IL-18, at same time, may delivery and provide adequate local cytokine levels for immune cell activation.

In our study, the IL-18 gene was transfected into DCs by recombinant adenoviral vector and we observed cytokine releases in serum of the mice were immunized with DCs modified with IL-18 and tumor lysate by ELISA. After 7 d of the mice immunized, the concentration of IL-18 and IFN-γ was obviously increased in DC-IL18-Lysate group. This indicated DCs transfected with the cytokines gene exhibited significant levels of IL-18 production, At same time, augmented the production of IFN-γ.

In our research, the effect of immunological protection and immunotherapy of DCs vaccines was obviously increased when DCs were modified with IL-18 gene and tumor lysate than IL-18 gene alone, tumor lysate alone. Especially, from the results of our study we found DCs modified with IL-18 gene alone induced a limited antitumor immunologic reaction. These findings strongly suggest that IL-18, tumor lysate and DC interacted and there were congenerous effect against pancreatic carcinoma. At first, IL-18 enhanced NK cytolytic activity to induce more frequent and effective tumor cell death and promoted NK and T cells to secrete IFN-γ. Zitvoget et al[48] reported the antitumor effect of DC-based vaccination was dependent on production of Th1-associated cytokines such as IFN-γ. Therefore, IL-18 may play an important role in antitumor activity of DCs through enhancing the production of IFN-γ[49]. In turn, DCs sever as effective antigen-presenting cells to induce potent and specific immunologic reaction. At same time, DCs expressed more ICE that was required when the preprotein of IL-18 was processed into the biological activity form. As shown in a recent study, the functions of DCs were affected by contact with tumor cells. Dynamic changes in chemokine receptor expression (up-regulation of CCR7) were identified on DCs following contact apoptotic tumor cells[50]. Fumiaki et al[51] also demonstrated that direct contact with DCs and tumor cell could be important for generating CTLs. Thus, the implications are that IL-18/Tumor cell/DC plays a critical inductive and interactive role in promoting the efficiency of immunotherpy against pancreatic carinoma.

In summary, DC vaccines modified with tumor lysate and Interleukin-18 gene can induce a specific and effective immune response against pancreatic carcinoma cells. However, the feasibility and security of this DCs vaccine still need to be observed in additional experiments.