AIM: To examine the molecular mass and identify the bioactivity of MG7 scFv for its application as a targeting mediator in gene therapy of gastric cancer.

METHODS: Two strongly positive recombinant phage clones screened from MG7 recombinant phage antibody library were separately transfected into E.coli TG1. Plasmid was isolated from the transfected E.coli TG1 and digested by EcoR I and Hind III to examine the length of exogenous scFv gene. Then, the positive recombinant phage clones were individually transfected into E.coli HB2151.The transfectant was cultured and induced by IPTG. Perplasmic extracts was prepared from the induced transfectant by osmotic shock. ELISA was used to examine the antigen-binding affinity of the soluble MG7 scFv. Immunodoting assay was adopted to evaluate the yield of soluble MG7 scFv produced by transfected E.coli HB2151. Western blot was used to examine the molecular mass of MG7 scFv. Finally, the nucleotide sequence of MG7 scFv was examined by DNA sequencing.

Gastric cancer takes the leading place in the incidence of various tumors in china[1]. Many conventional approaches, including surgical, chemical and physical treatments, appear palliative in most advanced cases. Because these conventional approaches cannot selectively target at the tumor cells and completely eradicate them, and recurrence and metastasis of tumor may develop due to the existence of residual tumor cells. Therefore, targeting therapy for tumor is badly needed to achieve a greater curative effect and overcome the obstacle existing in the conventional approaches[2-13]. Recent studies showed that the targeting therapy had a promise in the treatment of gastric cancer[14-29]. In the present study, we produced the soluble MG7 scFv and evidenced that MG7 scFv is a favorable mediator for targeting therapy of gastric cancer.

The strong positive recombinant phage clones (3 µL containing 2 × 10 9 pfu) were separately added into 5 mL log-phase E.coli TG1 and incubated for 1 h at 37 °C with shaking at 250 r·min-1. Plasmid was isolated from the culture product and digested by EcoR I and Hind III. Electrophoresis was performed to check the digested product.

Production and antigen-binding affinity test of the soluble MG7 scFv

The strongly positive recombinant phage clones (3 µL containing 2 × 109 pfu) were separately added into 5 mL log-phase E.coli HB2151 and incubated for 1 h at 37 °C with shaking at 250 r·min-1. 10 µL IPTG (isopropyl β-D-thiogalactopyanoside) were added and incubated overnight at 37 °C with shaking at 250 r·min-1. Cells were precipitated by centrifugation and supernatant was also collected. The precipitated cells were subjected to osmotic shock for preparation of soluble MG7 scFvs. KATOIII cells in log phase were transferred into a 96 wells-plate and immobilized on the wall by centrifiguation at 1000 g for 10 min, and finally fixed in 0.25 mL·L-1 glutaraldehyde. 0.2 mL perplasmic extracts and supernatant were applied to each well and incubated at 4 °C overnight. 0.2 mL anti-E tag antibody were applied to each well and incubated at 37 °C for 2 h. 0.1 mL HRP-labeled goat anti-mouse (HRP-GAM) Ig solution was added into each well. The absorbance value (A) at 450 nm of reactant in each well was measured after incubation for 1 h at 37 °C and staining with TMB.

Immunodoting test of the yield of soluble MG7 scFv

40 µL of perplasmic extracts and supernatant were separately dotted on the Hybond-C super membrane and dried at 60 °C for 30 min. After being blocked by 50 mL·L-1 nonfat milk for 2 h, the Hybond-C super membrane was incubated in 5 mL diluted anti-E tag antibody solution at 37 °C for 2 h. 5 mL HRP- labeled goat anti-mouse (HRP-GAM) Ig solution were added for another incubation at 37 °C for 1 h and eventually stained by DAB.

40 µL of perplasmic extracts and supernatant were firstly analysized by SDS-PAGE and then transferred onto the Hybond-C super membrane. After being blocked by 50 mL·L-1nonfat milk, the Hybond-C super membrane was incubated in 5 mL diluted anti-E tag antibody solution at 37 °C for 2 h. 5 mL of HRP- labeled goat anti-mouse (HRP-GAM) Ig solution were added for another incubation at 37 °C for 1 h and eventually stained by DAB. 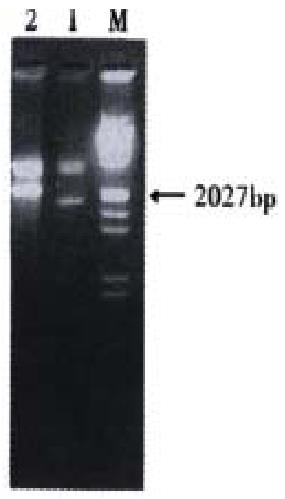 One of the strong positive clones was shown to produce soluble form of MG7 scFv with Antigen-binding activity (Table 1). This clone was confirmed to contain a 750 bp fragment of exogenous gene by restriction analysis above and chosen for later use.

The yield of soluble MG7 scFv

A protein band with positive signal was found at Mr 30 indicating that the soluble MG7 scFv was a protein of Mr 30 (Figure 3). 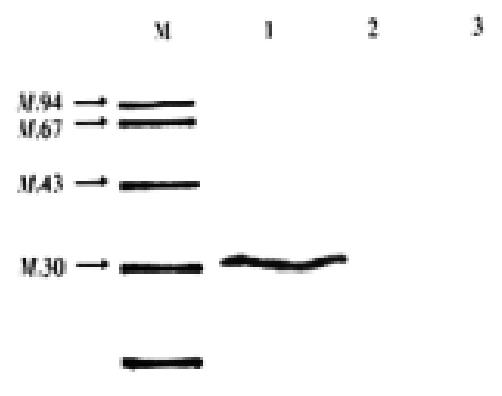 MG7, a monoclonal antibody against human gastric cancer, was proved to possessa quite high specificity and sensitivity to gastric cancer associated antigen. It was successfully used in experimental targeting therapy in nude mice bearing transplanted human gastric cancer[30]. But owing to its murine origin, like many other similar antibodies, MG7 antibody can elicit anti-mouse immunoreaction in man and thus its use in clinical practice is restricted[31,32]. One of the efficient strategies to this problem is to remove the constant region of antibody which makes main contribution to the immunogenicity of the murine antibody to human being[33-38]. On the other hand, antibody without constant region, termed scFv, is less antigenic and induces weaker repulsive reaction. In addition, it is a smaller molecule and comprises 1/6 of its original antibody in molecular mass which ensure that scFv can more readily penetrate into the tumor tissue in vivo and be easily cleared up from the normal tissue[39,40]. Besides, the scFv is more available than its original antibody by gene engineering technology which can provide an economical means for diagnosis of gastric cancer[41-47].

As mentioned above, the scFv is advantageous to its original antibody in clinical practice. Therefore, developing the MG7 scFv is of great significance in both early diagnosis and therapy of gastric cancer. For example, MG7 scFv fused with avidin can be used as a reagent in immuno-PCR for early diagnosis of gastric cancer. Additionally, a new immunotoxin for treatment of gastric cancer can be developed by fusing the MG7 ScFv and A subunit of ricin together. MG7 ScFv can direct the A subunit of ricin to MG7 positive gastric cancer cells[48-50]. In our previous study, the MG7 recombinant phage antibody derived from MG7 hybridoma was constructed and subsequently two strong positive phage antibody clones were screened out from this library[51].

Targeting therapy for tumors in the last decade has become a highlight in the field of tumor therapy[52-57]. In past, the discoveries of many tumor specific antigen (TSA) and tumor associated antigen (TAA) assured the practicability of antibody as a tool in tumor targeting therapy[58-69]. Ascribed to its high specificity and sensitivity in recognizing associated antigen, antibody is the optimal candidate for targeting mediator. Therefore, targeting therapy mediated by antibody still remains as a promising curative modality among the ways of tumor therapy and attracts worldwide attention[70].

This study was conducted with the purpose to produce the soluble MG7 scFv, identify its antigen-binding affinity, determine its molecular mass and get an understanding of its nucleotide sequence. We first examined the length of exogenous MG7 scFv gene harbored in the two strong positive phage antibody clones by restriction analysis and found that one of the phage antibody clones contained a 750 bp fragment of exogenous gene which was identical to many discovered scFvs in length. Secondly, we prepared the perplasmic extracts (containing majority of the soluble scFv ) from IPTG-induced E.coli HB2151 and detected the antigen-binding affinity of MG7 scFv by ELISA. One of the soluble MG7 scFvs was shown to possess apparent antigen-binding activity. Subsequently, immunodoting test exhibited that E.coli HB2151 had successfully produced the soluble MG7 scFv with high yields via induction by IPTG. Meanwhile, western blot suggested that the molecular mass of soluble MG7 scFv was Mr 30. Finally, DNA sequencing unraveled that the MG7 scFv had the common characteristics shared by other known scFvs in nucleotide sequence. Collectively, we have successfully developed the soluble MG7 scFv and created an opportunity to study its application in targeting therapy of gastric cancer.