In recent years, there have been many reports about animal model to investigate drugs for inflammatory bowel diseases (IBD). The experimental animal model often used is acetic acid-induced damage of colonic muscosa. In the present study, this animal model was investigated by administering various concentrations of TNBS.

Animals Wistar male and female rats weighing 258 g ± 25 g were used in this study. They were provided by the Department of Experimental Animals of Beijing Medical University. They were housed in rack-mounted cages with a maximum of 6 rats, and were fasted for 12 h with access to waterad libitum before experiment.

Effect of various TNBS doses on myeloperoxidase (MPO) activity, colon damage and weight A total of 30 rats were randomized into five groups, 6 rats each group (in a cage), consisting of a 30% ethanol control group as well as four dose TNBS groups. The animals were anesthetized with 20% ethyl carbarnat e (ip, 6 mL/kg), and 0.5 mL of either 30% ethanol (controls) or various concentrations of TNBS was slowly administered into the lumen of the colon via the anus using a rubber catheter (12 cm long, external diameter 2 mm). The rats were killed after 3wk, and the distal colon (8 cm) was removed, opened longitudinally and washed to remove lumina contents, colon wet weight was weighed, and colonic injuries were evaluated. The excised colon was pinned out on a wax block washed with 0.9% saline and assigned a code number. The colon was immediately examined under a stereomicroscope and any visible damage was scored on a 0-5 scale (Table 1). Small sections of colon were taken from two distinct areas from each colon and placed in 10% formalin for histological examination. The colon was fixed, cut longitudinally into 5ìm sections, stained with hematoxylin and eosin. The second segment (200 mg-400 mg) was immediately frozen for subsequent estimation of MPO activity[1].

The relationship of MPO and time-course Based on the results of dose-response studies, the dose of TNBS used in subsequent experiments was 100 mg/kg per rat. A total of 40 rats (5 rats per cage) administered a single intracolonic dose of TNBS ethanol solution (0.5 mL/rat). In control experiments, 5 rats received 0.5 mL 30% ethanol. At various times (24 h and 1 wk-8 wk) after intracolonic administration of TNBS or one of the control solutions, 5 rats from each treatment group were randomly selected and killed, the colon tissue MPO activity was determined as the indices of inf lammation.

Statistical analysis The data were expressed as -x ± s, and analyzed using the Student’s t test to compare the difference.

Three weeks after TNBS/ethanol administration, the bowel wall was basically normal in the 25 mg/kg group, and “string of beads” was found in 1 rat. Medium hemorrhage, edema and ulcers, cryptoabscess in the mucosa were observed in animals that received 50 mg/kg of TNBS, in TNBS group (100 mg/kg), the bowel lumen became narrow with thickened wall (2 mm-3 mm), on the bowel lumen mucosal surface area there was adherent membrane with brown black, liner ulcers (1 mm-6 mm), proliferous lymphocyte tissue, inflammatory granulomas and submucosal neutrophils infiltration. Macrophages, lymphocytes, fibroblasts, and cryptoabscess were also observed. The TNBS (150 mg/kg) group had noticeable ulcers and inflammatory granulomas in their colon, neutrophil infiltration was obviously observed in mucosa and sub mucosa extensive necrosis of the colonic mucosa and exfoliation of the epithelia were found in other rats with intact muscularis. In cases of severe ulcers, the colon had often adhered to surrounding intestinal tissues and abdominal wall (Figure 2). 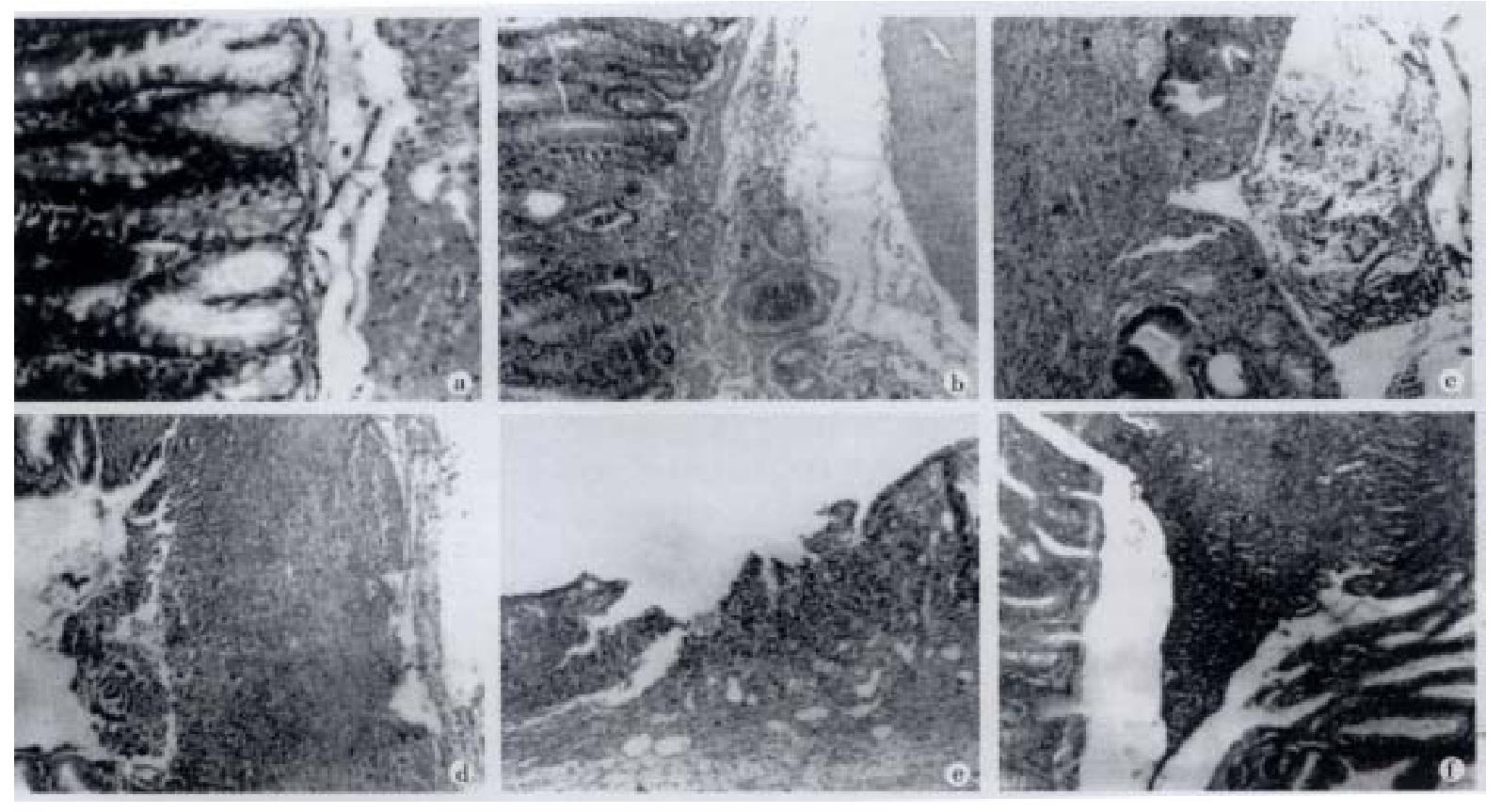 A single instillation of TNBS at the dose of 100 mg/kg into the rat colon produced chronic ulcers and inflammation which had persisted for up to 7 wk. MPO activity reached a maximum value at 3 wk after TNBS, and was followed by a gradual reduction in activity. At 3 wk the MPO value was at near baseline level (Figure 3). 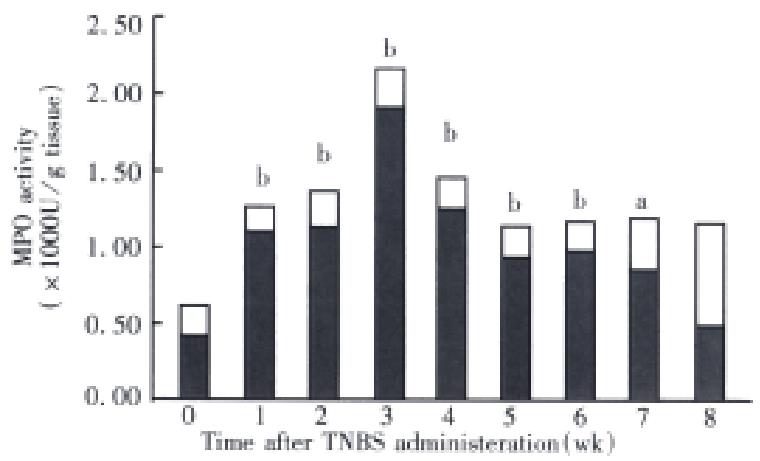 Figure 3 The effects of intracolonic administration of 100 mg/kg of TNBS on MPO activity 1 wk-8 wk after administration. Each bar represents the -x ± s of 5 animals. All data for TNBS-tr eated rats were compared with 0 wk (control group). aP < 0.05, bP < 0.01.
DISCUSSION

TNBS is a hapten, when it is bound with a substance of high molecular tissue proteins, it will turn into a antigen. It has been shown that it can elicit immunologic responses, induce generation of colitis[2,3]. The histological features of the animals received TNBS (50 mg/kg-150 mg/kg) were chronic inflammation, relatively long duration of inflammation and changes in various inflammatory mediators such as prostaglandin E2, thromboxane B2, leukotriene B4, 6-keto-prostaglandin F1α, leukotriene C4, plet elet-activating factor and interleukin. This model is characterized by the simple process and reproducible colonic damage, inexpensive and short duration of the experiment, long-lasting damage with inflammatory cell infiltration and ulcers. Thus, the model is rather suitable for the assessment of the effects of potential agents. In the present study, the dose of TNBS producing a moderate colonic inflammation and ulcers was about 100 mg/kg, the severity of colonic inflammation induced by TNBS increased with the dose administered. So a TNBS dose of 100 mg/kg was chosen for an appropriate experimental dose, the results were similar to the reports in the literature[4,5].

There was extensive colonic muscosal and submuscosal damage characterized by infiltration of inflammatory cells and ulcers after different doses of TNBS ( 50 mg/kg-150 mg/kg ) were administered into the colons of rats. After the animals received TNBS ( 100 mg/kg ), in acute phase, extensive infiltration of inflammatory cells constituted the main part; in chronic phase, the inflammatory granulomas and ulcers induced by TNBS made up the main part. MPO is an enzyme found in the neutrophils, and can be used as a quantitative index of inflamm ation in colonic tissue[1]. MPO activity may be regarded as an index of inflammation damage[6].