AIM: To investigate the role of tumor necrosis factor (TNF) in lung injury during acute necrotizing pancreatitis (ANP), and the therapeutic ef fect of “Tong Xia” purgative method in minimizing the severity of lung injury.

RESULTS: Elevation of TNF activity was more prominent in BALF than in serum. TNF activity in serum at 6 and 12 h and in BALF was significantly decreased in the “Tong Xia” treatment group than in the saline control one (q = 21.11, q = 12.07, q = 9.03, respectively, P < 0.01) and the lung injury was significantly alleviated at 12 h as compared with that in the saline group, manifested as amelioration of the lung wet/dry weight ratio, decrease in protein concentration and neutrophils count in BALF, and improvement of pulmonary inflammatory changes. A positive correlation was demonstrated between serum TNF activity and endotoxin level.

CONCLUSION: Hypersecretion of TNF is shown to be one of the majo r causes of lung injury during ANP; “Tong Xia” purgative method could allevia te the degree of lung injury mediated by TNF.

In the process of the multiple organ dysfunction syndrome (MODS) caused by severe acute pancreatitis, acute lung injury (ALI) occurs most frequently. A number of cytokines are involved in ALI caused by severe acute pancreatitis due to excessive stimulation of monocyte macrophages provoked by endotoxin. Dachengqitang can inhibit the absorption of enterogenous endotoxin and relieve endotoxemia so as to prevent and ameliorate the MODS including the lungs. The purpose of this study is to investigate the effects of TNF on ALI in acute necrotizing pancreatitis (ANP) and to determine whether the herb mixture could relieve the ALI, and investigate its mechanism of action.

ANP models were made by the retrograde injection of 5% sodium taurocholate into the pancreatic duct. The canines were only accessible to drinking water, 24 h later were anesthetized with 3% pentobarbital sodium ( 1 mL/kg ) intraperitoneally in normal saline ( 10 mL·kg-1·h-1 ) dripping continuously. A median incision was made in the upper abdomen to expose the duodenum, then a transverse incision (2 cm) was made at the level of the orifice of the main pancreatic duct. A catheter was inserted and 5% sodium taurocholate (1 mL/kg) was injected into the pancreatic duct at a pressure of 16 kPa, then pulled out, the duodenal dwelling catheter was placed, and Chinese herbal medicine or norm al saline could be given via the duodenum. In sham operation group, the catheter was pulled out and no medicine or saline was given.

Dachengqitang consisted of -Radix at Rhizoma Rhei 30 g, Natrii Sulfas 20 g, Cortex Magnoliae Officinalis 30 g, and Fructus Aurantii Immaturus 15 g. The latter two were decocted for 25 min with 500 mL water, then added with Radix at Rhizoma Rhei, decocted for another 3 min, and then filtered to yield 150 mL medicinal fluid. Finally, the Natrii Sulfas was added. In treatment group, 50 mL of the medicinal flu id and saline were given through the duodenal fistula tube at 0.5, 4 and 8 h, respectively.

Serum amylase It was measured before the model was made and at 2, 6 and 12 h after.

Serum endotoxin It was measured with the of azo coloration before the model preparation and at 2, 6 and 12 h after, 2 mL blood was drawn from the femoral vein, and the serum was isolated for measurement. The standard curve correlation coefficient was r = 0.999.

Serum TNF activity It was measured with the method of the mouse fibroblast L929 biological activity quantitative analysis, the same procedure was carried out before and after.

Broncho-alveolar lavage fluid (BALF) The canines were exsanguinated to death 12 h after the model preparation. After thoracotomy, the whole lungs together with the trachea were taken out, the left bronchus was ligated and the left lung was removed and weighed; the right lung together with the trachea was used for lavage purpose. The surface blood was washed away with normal saline. A total of 100 mL of normal saline was repeatedly lavaged for 5 times, and 80 mL of the lavage fluid was collected. Ten mL was centrifuged, and 2 mL of supernatant was obtained for protein content measurement; another 2 mL was used for the TNF activity measurement. The sediment was stained for the counting of all kinds of nucleated cells.

Pathological examination The lung and the pancreatic tissues we re sectioned and preserved in 10% formalin fluid.

All data were placed in the computer for the statistical analysis with the STATA statistics software.

Abdominal cavity In both saline control group and treatment group, as much as 300 mL-500 mL of bloody ascitic fluid were present. The re was no statistical significance between them. In sham operation group, only a small amount of clear ascitic fluid was noted. In saline control group and treatment group, the pancreas appeared violet black and enlarged, subserous hemor rhage and a little saponification were observed. 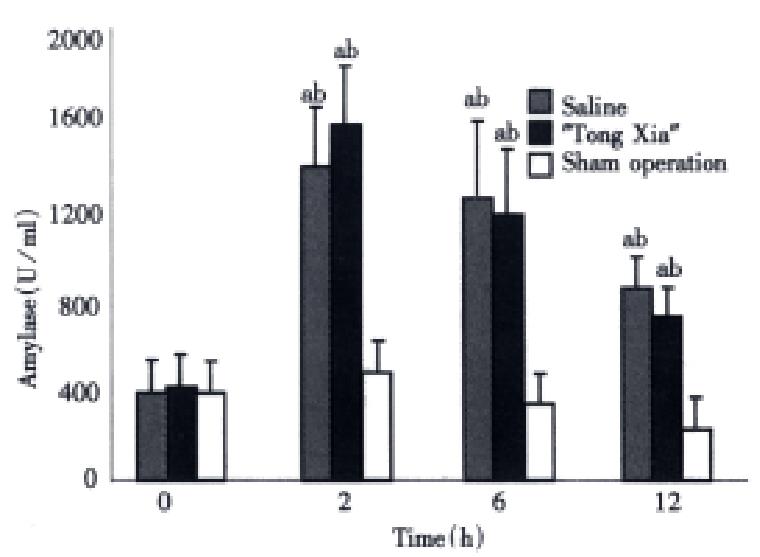 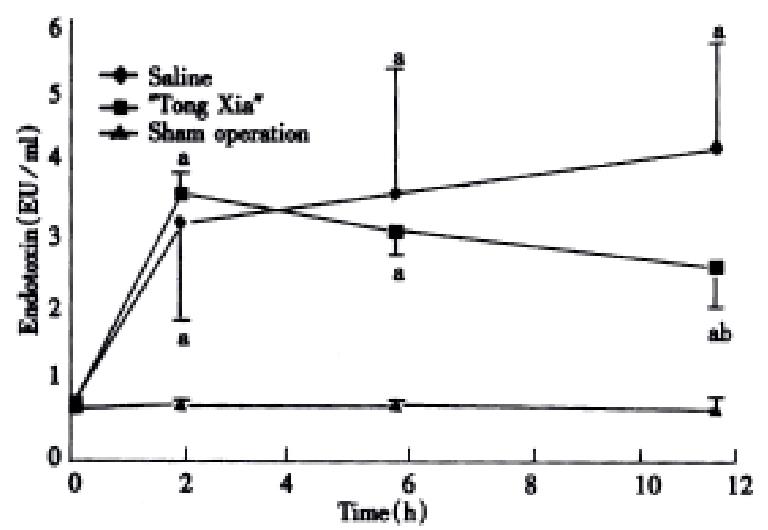 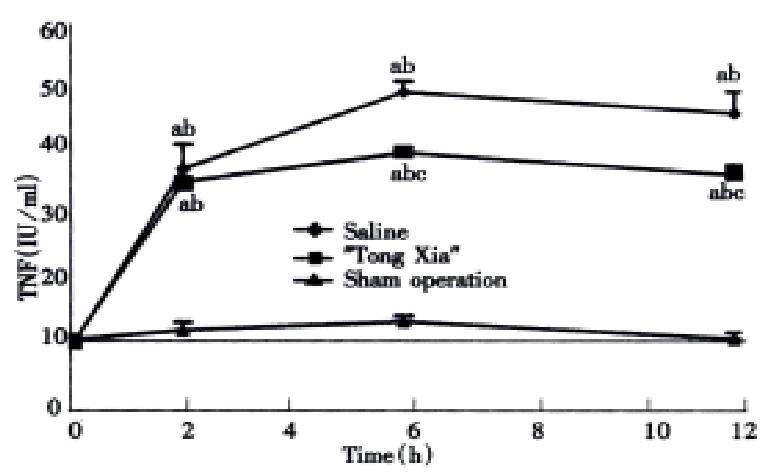 The linear correlation analysis showed that there was a positive correlation between serum TNF activity and endotoxin level in saline control group (r = 0.9706, P < 0.05).

MODS is frequently seen in severe acute pancreatitis. It is probably due to the cytokines produced by excessive activation of the monocyte-macrophage system, and the influx and infiltration of polymorphonuclear leukocyte cytokines as TNF, IL, inflammatory mediators, phospholipase A2, oxygen free radicals, cathepsin may all contribute[4]. Among them TNF plays an important role in the pr ocesses. Many authors reported that TNF activity was increased in the serum and BALF from the patients with severe acute pancreatitis and adult respiratory dist ress syndrome[5]. Majority of the authors believed that the increase in TNF activity was due to excessive stimulation of mononuclear-macrophage by endotoxin. In this study, serum TNF activity was remarkably increased, which indicated and was involved in the pathophysiological processes of ANP. TNF activity was also increased more markedly in the BALF than that in the serum, which suggested that TNF also came from pulmonary alveolar macrophages. There was a positive correlation between serum TNF activity and endotoxin level, which indicated that the increase in TNF activity was caused by the stimulation of endotoxin. In BALF, polymorphonuclears and macrophages were both increased more remarkably than those in sham operation group, indicating the involvement of polymorphonuclears in the lung injury. In treatment group, at 6 and 12 h after the model preparation, TNF activities in both serum and BALF were lower than those in saline control group, and the lung injury was also much milder, indicating that Dachengqitang could ameliorate the lung injury mediated by TNF.

“Tong Xia” therapeutic method, is an important part of traditional Chinese medicine in treating acute pancreatitis, and has been studied extensively by Chinese scholars. As regards to the therapeutic mechanism, the herb mixture by purgation could decrease the absorption of the gut endotoxin, ameliorate the endotoxemia and translocation of gut bacteria, and protect the gut barrier function. In this study, at 6 h after ANP, the serum endotoxin level was a little lower in the treatment group than that in saline control one, and the serum TNF activity was lowered very much, suggesting that Dachengqitang inhibited TNF activity via inhibiting the absorption of endotoxin.