Since the advent of hybridoma technology[1], monoclonal antibodies have been widely used in basic studies and clinical application. F(ab’)2 is a bivalent antibody fragment which is currently used for both diagnosis and treatment [2], and better than the original mAbs, because it does not retain complement binding function due to lack of Fc regions and reduced interaction with non-specific proteins and the smaller molecular weight than the mAbs, furthermore, it can be digested by pepsin or papain and purified by size exclusion chromato-graphy[4], ion-exchange chromatography[6] or hy-drophobic interaction[7]. However, these methods are time-consuming, and cannot attain sufficient purity and recovery of F(ab’)2 fragment. Development of efficient procedures for F(ab’)2 preparation is an urgent necessity.

Mouse mAb Hab18 belonged to the IgG1 subclass was used, and the specific antigen was human hepatoma. It was produced by our laboratory; papain was purchased from Sigma.

Papain digestion MAb HAb18 was purified from the ascitic fluid which was centrifuged at 1000 r/min for 20 min to remove cells, and the supernatant was dialyzed against 10 mmol/L phosphate buffer (PB), pH 5.5, and then placed at column of SP-cellulose FPLC, the fraction containing IgG1 HAb18 was precipitated by adding ammonium sulfate to give 50% saturation, followed by centrifugation at 5000 r/min for 10 min after standing for 2 h. The precipitate was dissolved in PBS (10 mmol/L sodium phosphate, pH 7.4, 150 mmol/L NaCl ) to 20 g/L, and dialyzed overnight against 0.1 mol/L sodium acetate, pH 5.5.

MAb digestion was carried out by the method of Parham et al[8] with some modification. Briefly, papain was dissolved in 0.1 mol/L sodium acetate, pH 5.5 with 3 mmol/L EDTA, 1 mmol/L DTT (Sigma) and then incubated for 30 min at 37 °C. Activated papain was freed from excess DTT by gel filtration of the Sephadex G-25 (Pharmacia). The papain was determined by measuring absorbance at 280 nm and adjusted to 2 g/L. Preactivated papain was added to mAb HAb18 at a ratio of 1:20 (w/w) and the mixture was incubated at 37 °C for 2 h. The reaction ceased by addition of 30 mmol/L iodoacetamide (Fluca) and the products analyzed by SDS-PAGE in the absence of β-mercaptoethanol.

Chromatographic purification The papain digest was dialyzed against 10 mmol/L Tris-HCl, pH 8.0 and applied to a column of DEAE-Sepharose-FF (2 cm × 18 cm, Pharmacia) connected to FPLC which was-equilibrated and then washed in the same buffer until the absorbance at 280 nm reached a background value of 0.01. The column was then eluted with a linear gradient from 0 mmol/L-100 mmol/L NaCl in the same buffer. Fractions were collected and assayed for absorbance at 280 nm and analyzed by SDS-PAGE.

Analytical studies The purity of F(ab’)2 fraction was detected by SDS-PAGE which was performed in a 10% gel under reducion or non-reducion conditions according to the method of Laemmli[9]. Proteins were treated with loading buffer in the absence or presence of β-mercaptoethanol at 100 °C for 5 min and stained with Comassie Brilliant Blue R-250.

Antigen binding activities of F(ab’)2 were measured by indirect immunofluores cence. Viable hepatoma cells were fixed on the plates. F(ab’)2 fraction was d iluted with PBS to 1 mg/L, and series of two-fold dilu tions were prepared and added to plates which were incubated for 60 min at 37 °C, washed with BPS, and added fluorochrome-conjugated rabbit anti-mouse -F(ab’)2 antibody (Sigma) then incubated for 30 min at 37 °C and examined under an immunofluorescence microscope.

The ascitic fluid from which the mAb was purified by SP-FPLC, the product of the papain digestion for 2 h and the purified F(ab’)2 were applied to SDS-PAGE under non-reduction and reduction conditions, the results indicated abou t 95% of the antibody were degraded to F(ab’)2 fragment after 2 h incuba tion. The digest contained F(ab’)2, F(ab’), and Fc fragments as well as intact IgG and other contaminating proteins. A band with Mr 160000 was corresponding to IgG under non-reduction condition before the reaction, and a band of Mr 160000 was considered to be F(ab’)2 after digestion. Under reduction condition, IgG showed two bands of Mr 50000 and Mr 28000, which corresponded to heavy (H) and light (L) chains, respectively. In contrast, the H and L chains of F(ab’)2 were about Mr 30000 and Mr 28000 (Figure 1). 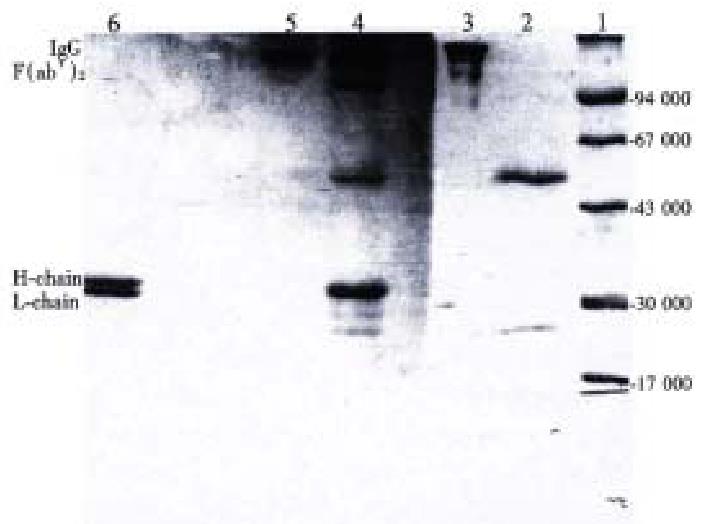 The papain digest was separated by FPLC using DEAE-Sepharose-FF column. As shown in Figure 2, the strength of interaction with DEAE was papain < (ab’)2 Fab ‘< IgG < Fc. Papain flow through the column, F(ab’)2, F(ab’), IgG, Fc and other protein bound to the column and purified F(ab’)2 fragment was obtained after elution with 50mmol/L NaCl. According to the SDS-PAGE result, the fragment was separated entirely with intact IgG, Fc, papain and other proteins. 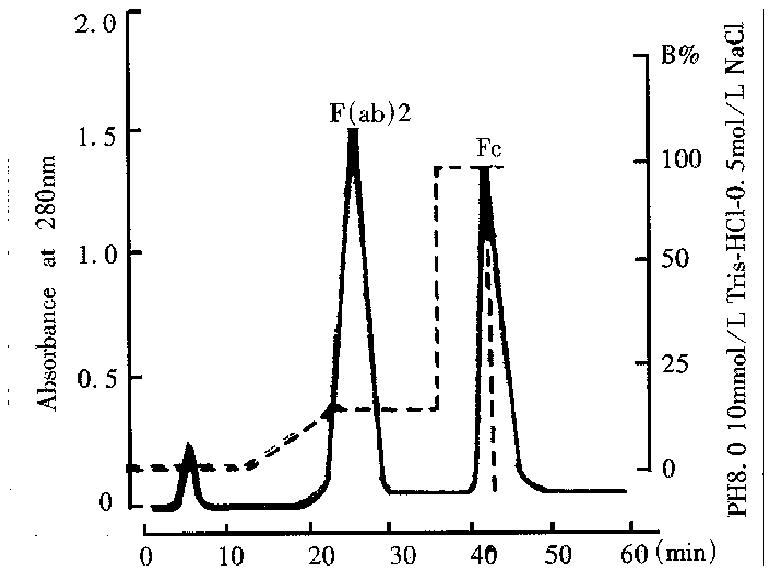 The collected F(ab’)2 pool from the DEAE column was applied to SDS-PAGE and then examined by thin-layer chromatography scanning. The results showed that the purity of F(ab’)2 fragment was more than 95%.

The immunoactivity of initial mAb and the F(ab’)2 obtained after digestion were determined using indirect immunofluorescence. After proteolytic digestion and chromatographic purification, the minimal detective concentration F(ab’)2 was 0.125 μg/mL, corresponding to 90% of their initial mAb activity.

The total protein digested by papain was 100 mg. The quantity of the F(ab’)2 obtained from the DEAE-FPLC was 53 mg, and the purity greater than 95%, due to the molecular size of F(ab’)2 fragment is 68% of the intact IgG, thus, the actual yield of F(ab’)2 was about 78% of theoretical yield.

Classical preparation of F(ab’)2 fragments from mouse IgG mAbs used to be digested by pepsin, however, Lamoyi et al[3,4] reported that the sensitivity to pepsin varied in different mouse IgG subclass, it was IgG3 > IgG2a > IgG2b > IgG1, pepsin had little effect on most mouse IgG1 proteins. Parham et al[6,8] used preactivatedthiol-free papain to cleave IgG1 mAbs to F(ab’)2 and Fc fragments efficiently, but it needed 18h- 25h for digestion. The method described here was modified according to the reference[8], the study showed that 2h was sufficient, more than 95% of mAb was cleaved successfully to F(ab’)2 fragment using papain digest ion. Under the conditions described above, 3 anti-hepatoma IgG1 mAbs had been so far tried and the same results obtained. The relative amounts of F(ab’)2 produced might vary with changes in the conditions of digestion, duration and concentration[8], so we suggested that the conditions of digestion for each monoclonal antibody pre paration be assessed by experience. In addition, it was critical to inactivate the papain, for we observed in our experiment that it might retain activity and led to degradation of F(ab’)2 to Fab and smaller fragments.

There have been some papers reporting the purification of F(ab’)2 fragments by gel filtration[2] or ion-exchange chromato graphy[3,6]. However, F(ab’)2 cannot be purified to homogeneity by single-step chromatography. Koichi[7] reported a purification scheme for F(ab’)2 fragment, using hydrophobic interaction, and ammonium sulfate was used in protein precipitation and purification. However, this technique might reduce significantly the antibody activity[10]. In the present paper, we described the use of FPLC using DEAE-Sepharose-FF to the purification of F(ab’)2 fragment of mouse IgG1 MAb. The advantage of the method described here was not only could be completed within on single-step, but also the fraction containing F(ab’)2 fragment was h omogeneous (Figure 1), which had been separated entirely from papain, intact IgG and Fc fragment, though F(ab’)2 sometimes contain a little of F(ab’), for m any purpose it was no need for further purification. To be more important, the recovered F(ab’)2 retained 90% of their initial mAb activity.

By using the procedures above a purification cycle was only 60 min, and F(ab’)2 fragment obtained from each cycle could reach the level of preparation scale. Because of these advantages, they could be a simple and rapid process. This method was quite useful in immunological diagnosis and therapy with antibody fragment.