AIM: To assess the accuracy and limitations of endoscopic ultrasonography (EUS) in the preoperative staging of gastric carcinoma in comparison with computed tomography (CT).

METHODS: According to the new (1987) TN staging, 62 patients with gastric carcinomas were examined preoperatively by EUS and the results compared with those of postoperative pathological TN staging. CT of abdomen was performed before surgery for 32 of the patients.

RESULTS: The overall accuracy of T staging was 83.9% for EUS and 28.1% for CT. For the detection of regional lymph node metastases, EUS accuracy was 79.0%, sensitivity 80.0% and specificity 87.5%, versus 50.0% accuracy for CT. The coincidence of perigastric infiltration was 90.0% for EUS and 41.2% for CT. The most frequent causes of misdiagnosis by EUS were microscopic tumor invasion and peritumorous inflammatory or fibrous changes.

CONCLUSION: EUS is a reliable method for the clinical evaluation of locoregional extension of gastric cancer and more accurate than CT in the preoperative staging of gastric carcinoma.

Gastric carcinoma is one of the most common malignant human tumors and carries a very poor prognosis with a 5-year survival rate of 6%-25%, depending on the tumor stage[1]. Surgical resection of the tumor and the involved lymph nodes remains the only historically proven curative treatment. An accurate preoperative staging of the most significant prognostic factors of gastric cancer, such as depth of invasion (T staging) and involvement of lymph nodes (N staging), would allow better planning of appropriate treatment. The decision as to which patients should either undergo primary operation or prior to chemotherapy, or should be treated by only palliative methods is greatly influenced by the results of preoperative tumor staging. The overall goal is to prevent under or overtreatment, to minimize the inherent morbidity and mortality rates.

Conventional endoscopy permits an examination of only the surface of the stomach, and important data, such as infiltration of the wall, local spread and lymph node involvement, are not provided by this technique. Computed tomography (CT) is currently used in the preoperative staging of gastric cancer, but the results are not completely satisfactory. The major difficulty encountered with CT is its inherent incapability for correct staging of the depth of tumor penetration of the gastric wall and its capacity for correct staging of regional lymph node involvement is also limited.

The purpose of our study was to assess the role of endoscopic ultrasonography, a relatively new modality, in the preoperative TN staging of gastric cancer.

From February 1996 to February 1997, 62 patients (35 men and 27 women; from 27 to 76 years of age, with mean age of 61-year-old) with gastric cancer diagnosed by upper gastrointestinal endoscopy and biopsy underwent preoperative evaluation by endoscopic ultrasonography (EUS). CT of abdomen was performed before surgery for 32 of the patients. Tumors were located predominantly in the fundus and cardia region (n = 20), the body (n = 16) and antrum (n = 23), and finally throughout the whole stomach (n = 3). Fourteen of the patients had linitis plastica. All of the patients were operated on within 3 wk after the findings upon EUS and CT examination. No complication was encountered during this study.

CT was carried out with a Somatom Plus (Siemens Corp, Germany). Scanning of abdomen was done with 10 mm sections using intravenous and oral contrast.

EUS studies were made using an echoendoscope GF-UM20/EUM20 (Olympus Corp., Japan), which had a rotating 360° transducer with swithchable frequencies of 7.5 MHz and 12 MHz. The patients were examined in a left lateral position after oropharyngeal anesthesia and given premedication with 5 mg diazepam and 20 mg 654.2 intramuscularly. The ultrasonic endoscope was introduced and advanced into the stomach. The stomach was filled with 300-500 mL de-gassed water and the balloon filled with water. The transducer was pulled back from the pylorus to the cardia, moving the tip of the endoscope along all parts of the stomach to detect the tumor, its contiguous structures and perigastric lymph nodes. The findings were recorded with a Polaroid camera.

The normal gastric wall is made up of five ultrasonographic layers of different echogenicities (Table 1). Tumors were identified by thickening and disruption of the typical five-layered configuration of the wall appearing as a hypoechoic mass. The assessment of tumor infiltration depth was based on the generally accepted five-layered structure of the gastric wall. Lymph nodes with a homogeneous or inhomogeneous hypoechoic echo pattern and sharply delineated boundaries were considered malignant, whereas hyperechoic lymph nodes with indistinct contours were classified as benign[2].

The findings of EUS and CT in terms of the diagnosis of depth of invasion by the primary tumor, local invasion, and lymph node metastasis were compared with postoperative pathological determination according to the new (1987) TNM staging system (Table 2)[3].

A total of 62 patients underwent endoscopic ultrasonography for gastric cancer staging. All tumors were diagnosed as adenocarcinomas by histologic examination. The depth of infiltration of the tumor was displayed by EUS in all cases (Table 3). A T1 carcinoma was correctly diagnosed with EUS as a hypoechoic pattern limited to the mucosa in 1 out of 2 patients (M type), or to the submucosa (SM-type) in all 3 patients. Overstaging occurred in 1 patient as a result of inflammatory changes surrounding the lesion, which was suggested as M-type or SM-type tumor sonographically, but all the 5 patients were eventually correctly diagnosed as having stage T1. Nine of 11 T2 tumors were correctly staged, whereas 2 cases were overstaged as stage T3. A T3 carcinoma was correctly diagnosed with EUS in 18 out of 24 patients. Understaging occurred in 2 patients, and overstaging in 4. For stage T4, EUS diagnosed 20 out of 22 lesions correctly and understaged the other 2.

Thirty-two patients were examined by CT, including 5 cases of T2, 10 cases of T3 and 17 cases of T4 diagnosed by post-operative pathologic examination. CT correctly predicted 2 out of the 10 T3 and 7 of the 17 T4 lesions according to findings of thickening of gastric wall or accompanying infiltration of the pancreas or the adjacent liver lobe; however, the examinations failed to assess the depth of wall penetration in the remaining T2-T4 lesions. The overall accuracy rate of CT for T staging was 28.1% (9/32). The coincidence of perigastric infiltration was 41.2% (7/17).

CT correctly predicted 9 out of 19 patients with cancer positive lymph nodes, for an accuracy rate of 47.4%, and correctly diagnosed the absence of nodal spread in 7 patients that were deemed N0 histologically. The overall accuracy rate was 50.0%.

This prospective study showed that EUS was not only highly accurate in determining the depth of invasion of gastric carcinoma, but also in detecting regional lymph node metastases, and that EUS was more accurate than CT for T staging (83.9% vs 28.1%) and n staging (79.0% vs 50.0%). This is in accordance with the results of previous studies[4].

The ability of EUS to image the gastrointestinal tract wall in detail provides a great advantage for staging the depth of tumor invasion (i.e. T). The high resolution of the individual layers of the gastrointestinal wall seen with EUS is a direct result of the relatively high frequency transducers used (7.5 MHz and 12 MHz). The degree of tumor penetration into each layer can be documented as a focal disruption. Early gastric cancer (i.e. T1) is visualized as a lesion with a hypoechoic echo pattern limited to the mucosa (i.e. M type) and/or submucosa (i.e. SM type). Advanced cancer is visualized as a structure with a hypoechoic pattern penetrating into (i.e. T2) (Figure 1) and/or through the muscularis propria (i.e. T3) (Figure 2) and/or into the adjacent structures (i.e. T4) (Figure 3). Endosonographically, early carcinoma can be distinguished from advanced carcinoma. With respect to CT, the size and location of a gastric mass can be documented as areas of gastric wall thickening, with the normal thickness in a distended stomach defined as less than 8 mm. Furthermore, a lack of the fat layer between the gastric mass and an adjacent organ indicates direct invasion. On the other hand, CT cannot differentiate between single layers of the gastrointestinal wall. This limits the use of CT in separating early (i.e. T1) from advanced tumor stages (i.e. T2/T3). 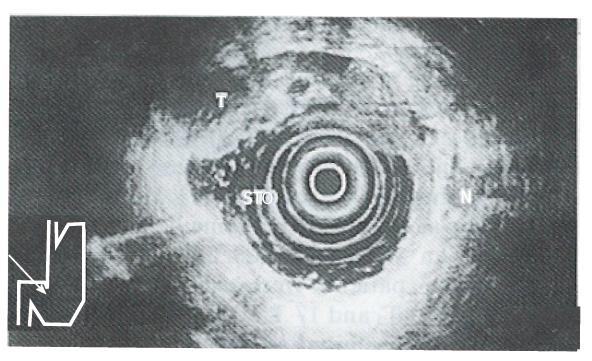 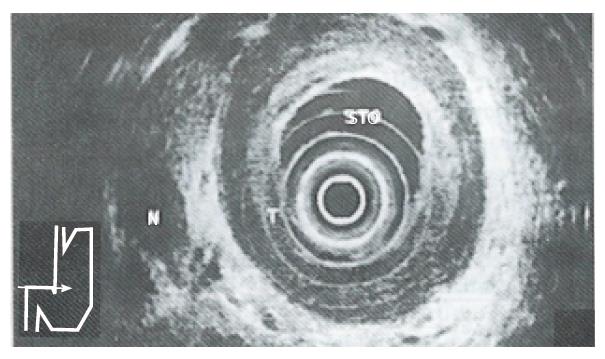 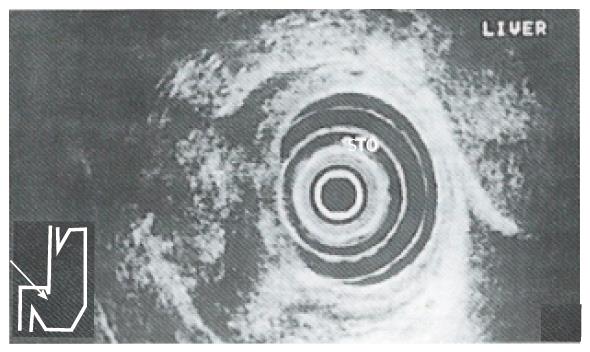 In our study, 16.1% carcinomas were mis-staged by EUS. Whereas microscopic tumor invasion was the most common cause of understaging, overstaging was mainly due to peritumorous inflammation or scar tissue which could not be distinguished from the tumor. In our experience, an association of the carcinoma with scar tissue should be suspected when a fusion of the 2nd and 4th layer is seen on EUS. Sometimes, overstaging in gastric T2 carcinoma is due to the fact that in patients without ascites, differentiation between serosa (T3) and subserosal (T2) infiltration is not possible. Furthermore, not all the parts of the stomach are covered by serosa; it is absent in some areas, such as the lesser curvature and the anterior wall of the antrum. On the other hand, in T4 cancers, EUS did not detect organ invasion (especially in the colon), leading to understaging. In addition, anatomic limitations inhibit perfect endosonographic examinations of two regions of the stomach: The prepyloric antral area and the proximal portion of the lesser curvature distal to the cardia.

In staging nodal diseases, EUS is also superior to CT, with an accuracy rate of 79.0% versus 50.0%. Lymph node metastases were determined by CT as enlarged lymph nodes of > 8 mm in diameter. We found the size of imaged lymph nodes to be an unreliable criterion of malignancy. Malignant nodes as small as 3 mm can be imaged with EUS, and our error in overstaging nodes by EUS occurred in nodes > 2 cm in diameter. The echo pattern and borders of lymph nodes seen on EUS were found to be reliable features for evaluating metastatic lymph node involvement. We have found that malignant nodes (Figure 4) tend to be rounded, sharply defined and hypoechoic compared to benign nodes that tend to be elongated, hazier in outline and more echogenic. Inflammatory changes and micrometastases were the most important causes of false positive and false negative results. These shortcomings can probably be resolved by using the echoendoscope equipped for EUS-guided cytological aspiration[5]. 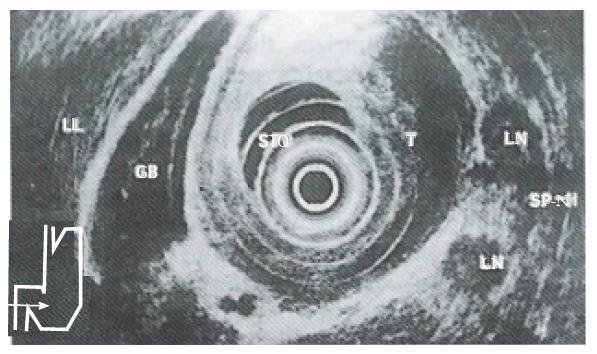 EUS is limited in evaluation of distant metastasis (i.e. M staging). Due to its limited depth of penetration, high frequency EUS can be used to scan the left liver lobe but only a portion of the right lobe, and it is unable to evaluate pulmonary metastases and distant peritoneal metastases, such as retroperitoneal and mesenteric nodes below the level of the superior mesenteric artery. CT is superior to EUS in this regard. In our experience in staging gastric cancer, the greatest accuracy for overall staging is achieved with combination of CT and EUS, namely using CT for M, and EUS for T and N.

In summary, our study has shown that EUS is superior to CT in staging T and n categories of gastric carcinoma. EUS is a reliable method for the clinical evaluation of locoregional extension of gastric cancer, and will be helpful in guiding management decisions, selecting appropriate surgical procedures and facilitating research aimed towards improving prognosis for this highly lethal disease. Therefore, EUS should become an important, if not essential, diagnostic procedure for clinical TNM staging.