AIM: To compare the therapeutic effect of three types of inter-ventional management for primary liver cancer.

METHODS: A total of 468 patients with primary liver cancer were randomly allocated to the following three groups: 138 cases treated with chemotherapy alone using mitomycin C, adriamycin and 5-FU (group A); 158 cases treated with chemoembolization using lipiodol (group B); and 172 cases with chemoembolization using lipiodol and gelfoam (group C). All patients were angiographically and sonographically followed-up.

CONCLUSION: Chemoembolization with lipiodol and gelfoam was the most effective therapy for primary liver cancer in this study. The position of the embolization should be far and middle sections of the hepatic artery, and the proximal section should be reserved as the route of the next intra-arterial chemoembolization.

In recent years, interventional therapies have been widely applied to the treatment of inoperable patients with middle and late stage liver cancer. These therapies include, but are not limited to, simple intra-arterial drug infusion, lipiodol embolization, gelfoam embolization, and microsphere chemoembolization. The literature has not provided definitive evidence as to which modalities are most efficacious. In order to summarize the experience in this field, we analyzed and compared our data as follows.

Over the past 4 years, we have treated nearly 1500 cases of liver cancer with 2764 transcatheter chemotherapies. In order to analyze the results of these collective cases more reliably, the cases from the most recent 1-year period were excluded and only cases with complete data were included. A total of 468 cases with complete data were analyzed comparatively; among these, 73 had been confirmed by surgery, 17 by puncture biopsy, and all others diagnosed by findings from AFP testing and/or B-ultrasound, CT and angiography examination. The 468 cases were divided randomly into the following three groups: 138 cases treated with simple intra-arterial drug infusion (TAI, group A), 158 cases treated with TAI combined with lipiodol embolization (TAI-Lp TAE, group B), and 172 cases treated with TAI-Lp TAE plus gelfoam embolization (TAI-Lp Gs-TAE, group C). In group C, 22 patients received microcapsule embolization (containing drugs). The three groups of patients were similar in clinical characteristics.

Celiac angiography was first performed according to Seldinger’s method for all patients to determine the arterial distribution and tumor location, size and type. Then, the catheter was inserted into the feeding artery and infusion or embolization was performed. All patients were treated with ADM 30-50 mg, MMC 20 mg and 5-FU 1000 mg simultaneously. Occasionally, CP 200 mg was used instead of the MMC. Lipiodol 10-30 mL mixed with anti-cancer drugs was infused. Finally, 1-2 mm3 particles of gelfoam sponge were added to the contrast medium and infused slowly.

The criteria of improvement after the treatment of liver cancer were decreased AFP value, reduced tumor size, and prolonged survival. The therapeutic effects for the 3 groups are shown in Tables 1, 2 and 3. The mean survival period of group A was 9.6 mo, of group B was 16.1 mo and of group C was 17.3 mo. The difference was statistically significant between group A and group B or C (P < 0.01), but not between group B and group C.

Interventional treatment of liver cancer in our hospital has advanced remarkably over the most recent decades. Early on, the fear of serious complications related to the embolization procedure and a lack of practical skill in application of the technique meant that most patients were offered only intra-arterial infusion chemotherapy. No patient with artery to portal vein fistula or cancer embolus in the portal vein was treated by embolization. With accumulated practical experience, however, the scope of embolization grew and our practitioners became comfortable with learning and adopting new methods. As a result, curative outcomes were increased obviously.

Serum AFP value is one of the most important standards for evaluating the therapeutic effects. The positive rates among the three groups in the current study were 60%-65%. Among the cases receiving more than 2 times of treatment, the cases whose AFP value decreased by > 50% represented 67.5% of group C, which was much higher than the 43.0% of group B and 32.2% of group A. AFP levels reduced < 25% or increased < 25% were regarded as unchanged, cases of which were the lowest in group C (4.8%) and the highest in group A (25.4%). The total rate of cases with decreased was 47.5% in group A, 58.2% in group B, and 79.5% in group C, which was in general agreement with the results previously reported for our home country[1,2] and abroad[3]. High or low value of AFP was not compatible with the reduction of tumors. Four cases were found in our series in which the tumors decreased obviously but the AFP increased rapidly in a short period of time after embolization.

Generally, all tumors show a reduction or necrosis (to varying degrees) after embolization chemotherapy. The effective rates of therapy for groups A, B and C were 20.3%, 41.2% and 44.8% respectively, which were similar to the results reported by Imaeda et al[3] in which 6% of the TAI group and 36% of the TAE group had tumors reduced by > 50%. There were only three cases with tumors disappearing completely (complete remission, CR) in our series and all the tumors were single nodule and had diameters of < 5 cm (Figures 1 and 2). It is uncommon for massive or gigantic tumors (> 5 cm in diameter) to disappear completely after treatment. In our study, these tumors generally showed necrosis of the central area and reduced tumor blood vessels (Figures 3 and 4). The scope of necrosis varied greatly among the different therapies. Among the 22 cases examined pathologically in our hospital[4], the tumor necrosis rate was 30.0% ± 28.3% for the 7 cases with simple MMC TAI, and necrosis of > 50% accounted for 28.6% of these; the rates in the other groups were 81.4% ± 28.3% and 85.7% respectively for the 7 cases with MTXmc TAE and 25%-75% for the 8 cases with MMC-TAI-Lp-TAE. Takayasu et al[5] also compared the effects of different therapies and reported that simple Lp TAE in 6 cases had almost no treatment significance, but showed value for position diagnosis, ADM TAI-Lp-TAE in 15 cases had some effects but not obvious, ADM TAI-Lp Gs TAE in 10 cases gave a complete necrosis rate of 83% for the main tumors and 53% for the daughter nodules. The results showed that lipiodol itself was not a good embolization agent but was a carrier that delayed drug excretion, thereby enhancing therapeutic effects. Therefore, gelfoam or microcapsule chemoembolization was the most effective therapy. 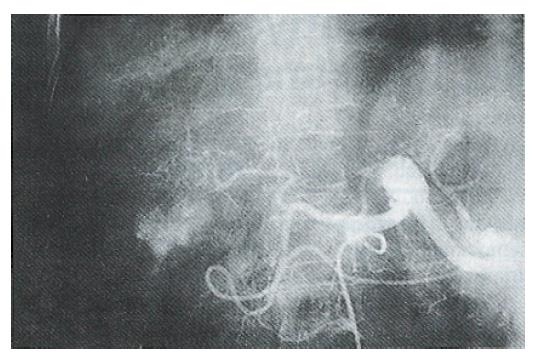 Figure 1 Primary liver cancer of the right lobe, with a hypervascular area diameter of 3 cm before treatment. 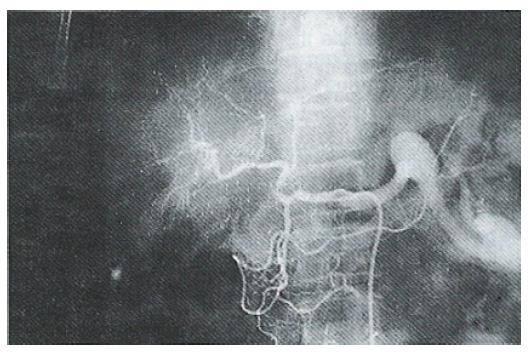 Figure 2 The same case as in Figure 1, showing the tumor stain having disappeared after the 6th treatment. 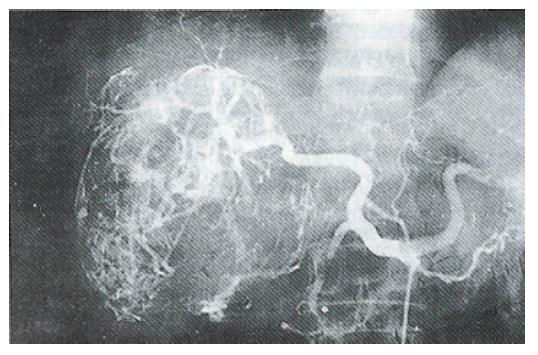 Figure 3 Celiac angiogram of gigantic nodular HCC with 12. 5 cm diameter in the right lobe before treatment. 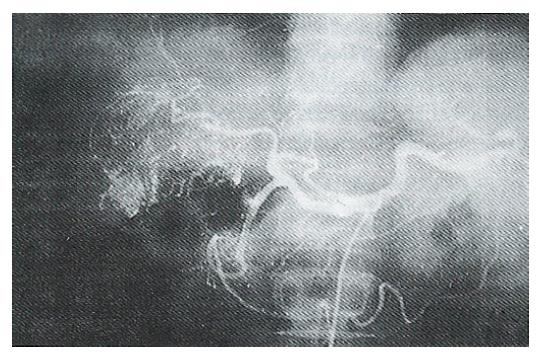 Figure 4 The same case as in Figure 3 after four treatments, showing necrosis in the center of the tumor and reduced presence of new vessels.
Survival rate and period

The above data shows that the survival rate of patients treated with intra-arterial drug infusion is higher than that of patients treated with systemic chemotherapy (1-year survival rate of 5.4%), that the TAI-Lp TAE is better than simple TAI, that the effect of TAI-Lp Gs-TAE is better than the former methods, and that much better effects are achieved when sectional sandwich therapy is used, i.e. embolization of the peripheral liver artery with Lp, infusion of the anti-cancer drugs and embolization with Lp and gelfoam. Why are compound embolization chemotherapy and the sandwich method most effective To answer this question, it is first necessary to explain it in terms of the microcirculation and physiological anatomy of liver[9]. The hepatic artery and portal vein are parallel and divided into two branches. The segment below the 8th class is segmentulum and the 12th class is the terminal hepatic arteriole (THA) of the classic lobule. The inner diameter of the THA is 20-50 μm, and that of the terminal portal vein (TPV) is 35 μm. The pressure of THA is 30-35 mmHg, which is 8 times that of TPV. Because the pressure difference between THA and TPV is high, drugs and Lp fill the THA and sinusoid, and flow reversely into the TPV when they are used at a volume exceeding a certain level, so both the THA and TPV are chemoembolized. Gelatin sponge particles are also injected into the small arteries to achieve the synergic effect of microtumor necrosing completely.

This paper was presented at the 19th International Congress of Radiology in Beijing.