AIM: To evaluate the relationship between nitric oxide (NO) and hyperdynamic circulatory status in portal hypertension.

METHODS: Twenty male Sprague Dawley rats (weighing 200 ± 20 g) were randomized into two groups: portal hypertension group (n = 12) and sham-operated control group (n = 8). The portal hypertensive model was established by means of graded constriction of the portal vein. The concentrations of nitrite (NO2-) in the portal vein and peripheral blood were measured by fluorometric assay to reflect NO levels. The reactivity of isolated abdominal aortic rings from rats with partial portal vein constriction and controls was determined by assessing response to administration of potassium chloride (KCl) (10-80 mmol/L) and phenylephrine (10-9-10-4 mol/L) with or without preincubation with NO synthase inhibitor Nω-nitro-L-arginine (L-NNA).

CONCLUSION: NO overproduction inhibits the vascular reactivity to vasoconstrictors, and it might be one of the main causes of vasodilatation and hyperdynamic circulatory status in portal hypertension.

Mechanisms of portal hypertension are complicated. In addition, circulatory abnormalities may affect the portal venous systemic circulation regardless of the presence or absence of defective liver structure and function. Hyperdynamic circulation can perpetuate and aggravate portal hypertension, possibly resulting in a series of grave cardiovascular and non-cardiovascular complications[1]. In recent years, nitric oxide (NO), a newly identified neurotransmitter, cell-killing factor and cellular messenger molecule, has attracted the attention of biologists and medical workers. Evidence has shown that NO plays an important role in cardiovascular function and is involved in the physiology of vascular tone, blood flow velocity and vascular resistance. Recent studies have also indicated that NO is involved in the pathophysiology aof portal hypertension[2].

In order to evaluate the relationship between NO and hyperdynamic circulation in portal hypertension, we used rats with partial portal vein constriction and rats that were sham-operated (controls) to investigate the reactivity of isolated vascular rings to potassium chloride (KCl) and to phenylephrine with or without pre-exposure to the NO synthetic inhibitor Nω-nitro-L-arginine (L-NNA). We determined that the serum concentrations of NO2- detected by fluorometric analysis reflect NO levels. The results of this study provide new insights that may help towards developing new treatments of portal hypertension.

Two weeks after the surgeries, the animals were re-anesthetized and portal venous pressure was measured. Blood samples from the portal vein and abdominal vein (2.0-3.0 mL) were obtained by direct puncture and centrifuged at 3000 rpm for 10 min to separate the serum. The serum samples were then stored at -40 °C for subsequent detection of NO2-. Whole blood samples (1.5 mL) were also obtained for other assays to detect serum electrolytes and markers of liver function. The abdominal aorta was dissected, placed in oxygenated Krebs solution, stripped of all fatty tissues and adventitia, and then cut into 3 mm rings. the length and external diameter of which were measured.

The prepared rings from both groups of animals were mounted horizontally between two stainless-steel stirrups in individual organ bath chambers filled with 10 mL of modified Krebs solution (mmol/L concentrations: NaCl 118.3, KCl 14.7, NaHCO3 25, MgSO4 1.2, KH2PO4 1.2, CaCl2 2.5, glucose 11.1, and EDTA 0.026, pH 7.4) and constantly bubbled with a mixture of 95% O2 and 5% CO2 and maintained at 37 °C. After 60 min of equilibration, the rings were allowed to adjust gradually with 30 mmol/L KCl until the optimal resting tension was obtained. All the experiments were the performed on the rings in the optimal resting tension, which was approximately 1.5 g. The contraction responsiveness to cumulative additions of KCl (10, 20, 30, 40, 50, 60, 70 and 80 mmol/L) and phenylephrine (10-9, 10-8, 10-7, 10-6, 10-5 and 10-4 mol/L) were measured with force displacement transducers (JZ-BK) and recorded with a multichannel paper recorder (XWTD464). The rings were then washed and equilibrated for 30 min, and then preincubated for 30 min with 10-5 mol/L of the specific NO biosynthesis inhibitor L-NNA. Contraction responses were evoked and measured with the range of cumulative concentrations of KCl and phenylephrine listed above in the presence of L-NNA. At the end of the experiments, the rings were weighed.

In principle, NO2- can react with 2, 3-diaminonathalen (DAN) in acid solution and produce a fluorescent substance, the intensity of which can be measured by a spectrofluorometer and used to indicate NONO2- content. To quantitate NO2-, we first made a standard curve by putting 100 μL aliquots of 0, 3.2 × 10-7, 6.4 × 10-7, 1.28 × 10-6, 1.92 × 10-6, 2.56 × 10-6, 3.2 × 10-6 and 3.84 × 10-6-mol/L NaNO2 into 5 mL test tubes, and then adding 10 μL of DAN-HCl solution, mixing well and allowing to react for 10 min at 20 °C. The reaction was stopped by adding 5 μL of 2.8 mol/L NaOH. Double-distilled water was then added to bring the final volume up to 3 mL, and the fluorescence intensity was measured at Ex365nm, Em420nm (RF-5000 Spectrofluorometer, Japan). Finally, the standard curve of fluorescence intensity versus the concentration of NaNO2 was generated. To measurement the concentration of serum NO2-, 200 μL aliquots of serum were placed in test tubes and mixed with 200 μL chloroform. After standing for 5 min, each tube was centrifuged for 15 min at 3500 r/min. The resultant supernatant was then mixed with 20% of its volume of 20% sodium sulfosalicylate to remove proteins. After centrifuging for 15 min at 3500 r/min, 100 μL of the resultant supernatant was mixed with 50 μL of 0.01 mol/L EDTA and then 40 μL of DAN-HCl solution was added. After reacting at 20→ for 10 min, 5 μL of 2.8 mol/L NaOH was added to stop the reaction. Double-distilled water was added up to a final volume of 3 mL, and the fluorescence intensity was measured. The concentration of NO2- was calculated from the standard curve.

Dose-response contraction curves were made with the experimental data. The EC50 values and the Rmax were calculated from each dose-response contraction curve by means of a non-linear regression method with a curve-fitting program. Rmax and EC50 values were averaged and the results were assessed statistically using either the paired or unpaired Student’s t-test as appropriate. The data of NO2- were analyzed with Student’s t-test, and the results are presented as mean ± SEM. Statistical significance was set at a P level of 0.05 or less.

All the animals survived the modeling and sham operations and subsequent experimental course, except for one. No rats in the control or portal hypertensive model group showed any appreciable alteration in hepatic histology. Body weight, age, serum electrolytes, liver function and portal venous pressure are shown in Table 1. No differences were found between the partial portal vein constricted and control rats for the parameters of body weight, age, serum potassium, alanine aminotransferase (ALT) and albumin. However, compared with the controls, the portal hypertensive rats showed marked hyponatremia and elevated portal venous pressure (both P < 0.01). 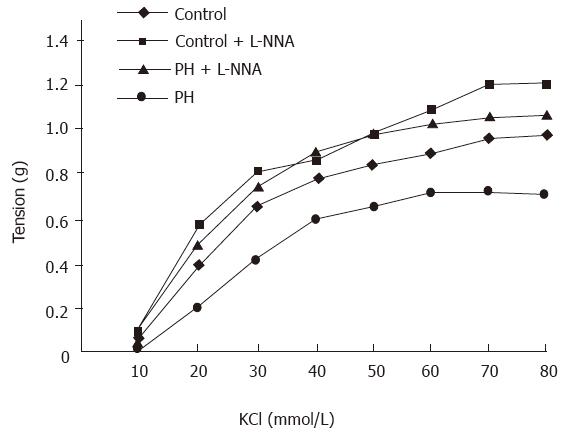 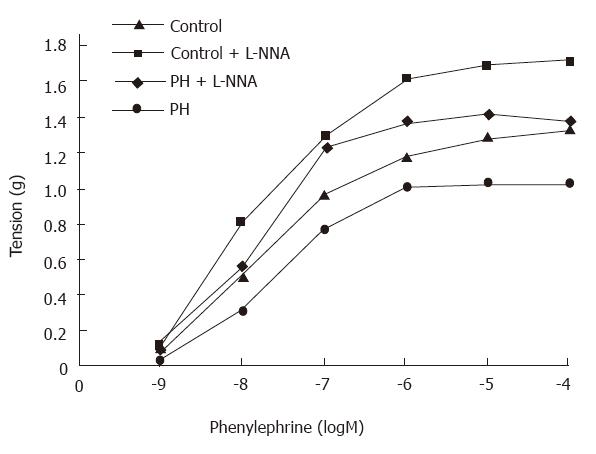 NO is synthesized from L-arginine by the enzyme NO synthase (NOS). There are two different types of NOS; the constitutive from (cNOS) is dependent on calcium and calmodulin for its activity, while the inducible from (iNOS) has no calcium or calmodulin requirement. cNOS is continuously present in the internal surface of the endothelial cell membrane, but iNOS represents a newly synthesized enzyme that is expressed in response to specific stimuli of endotoxin and cytokines in serial cell types, including vascular endothelium, vascular smooth muscle cells, hepatocytes and macrophages[3].

To date, no ideal technique is available to detect the NO content in tissues. The metabolic products of NO3-/NO2- are used to assess the NO level indirectly. The Griees reaction has been widely applied to measure NO2-, and it is relatively simple but its sensitivity is low[4]. In the present study, a new fluorometric analysis assay was developed and used to detect serum content of NO2-. Because NO2- plus 2, 3-diaminonaphthalene make a kind of fluorescent substance of 1-(H)-naphthotriazole, and the detection of the fluorescence intensity can reflect NO2- levels, the sensitivity of detection was markedly improved. The results of this study showed that serum levels of NO2-, especially those in portal vein blood, were elevated in rats with partial portal vein constriction, as compared with those in sham-operated controls. These findings indicated that there was an increased production of NO in portal hypertensive rats.

NO is an important regulator of systemic and local hemo-dynamics in physiological conditions, and is involved in the physiology of vascular tone, blood flow, velocity and vascular resistance. The mechanisms underlying these processes involve NO diffusion into the vascular smooth muscle cell, where it activates soluble guanylate cyclase and generates a subsequent increase in cGMP to cause relaxation of the vascular smooth muscle by binding of free intracellular calcium. Patients and experimental animals with portal hypertension reportedly present with hyperdynamic circulatory dysfunction characterized by splanchnic and systemic arterial vasodilation[5]. The pathogenesis of arterial vasodilation correlated with NO overproduction in portal hypertension. These findings collectively suggest that NO is an important mechanism of the hyperkinetic circulation associated with prehepatic portal hypertension.

The mechanism of increased vascular production of NO in rats with partial portal vein constriction cannot be shown from this study. The likely explanation is up-regulation of cNOS in the vascular endothelium, because iNOS is not expressed in isolated vessels which are not able to be stimulated by endotoxin and cytokines. In fact, increased cNOS activity has been reported by measuring NOS activity directly in homogenized blood vessels in animal models of portal hypertension with and without cirrhosis[7,8]. Whether the up-regulation of cNOS and subsequent NO overproduction is a primary or secondary event in the arteriolar vasodilation in portal hypertension could not be ascertained. Shear stress has been shown to be a powerful stimuli of cNOS[3]; therefore, overproduction of NO could be consequent to shear stress and other factors related to the hyperkinetic circulation. NO overproduction by endothelial cells would amplify and perpetuate arteriolar vasodilation. The effective inhibition of cNOS may reverse hyperdynamic circulation.

We are indebted to Dr. Ma Jin for his skillful technical assistance.