Gastric submucosal arterial collaterals (GSAC) secondary to splenic artery occlusion is an extraordinary rare and potentially life-threatening cause of acute upper gastrointestinal bleeding. Here, we report a case of massive bleeding from GSAC successfully treated by means of a multidisciplinary minimally invasive approach.

A 60-year-old non-cirrhotic gentleman with a history of arterial hypertension was admitted due to hematemesis. Emergent esophagogastroduodenoscopy revealed pulsating and tortuous varicose shaped submucosal vessels in the gastric fundus along with a small erosion overlying one of the vessels. In order to characterize the fundic lesion, pre-operative emergent computed tomography-angiography was performed showing splenic artery thrombosis (SAT) and tortuous arterial structures arising from the left gastric artery and the left gastroepiploic artery in the gastric fundus. GSAC was successfully treated by means of a minimally invasive step-up approach consisting in endoscopic clipping followed by transcatheter arterial embolization (TAE).

This was a previously unreported case of bleeding GSAC secondary to SAT successfully managed by means of a multidisciplinary minimally invasive approach consisting in endoscopic clipping for the luminal bleeding control followed by elective TAE for the definitive treatment.

A 60-year-old non-cirrhotic gentleman was admitted to our dedicated bleed unit for severe anemia (hemoglobin 4.8 g/dL on admission) and recent onset of hematemesis and melena with unstable hemodynamic parameters.

One attack of hematemesis and two episodes of melena occurred two and 24 h prior to the hospital admission, respectively.

The patient had a history of arterial hypertension. He denied any history of, or risk factors for, liver disease, pancreatitis, abdominal trauma and hypercoagulable states.

At admission, the patient was hemodynamically unstable (pulse of 110 bpm, blood pressure of 100/50 mmHg). He was afebrile, with respiratory rate of 15 rpm and oxygen saturation of 98%. His physical examination was negative for any evidence of portal hypertension or other stigmata of chronic liver disease. Abdominal examination revealed non-distended, non-tender abdomen with normoactive bowel sounds. The digital rectal examination showed black terry feces.

Complete blood count revealed a hemoglobin level of 4.8 g/dL and hematocrit of 14.6%. All other laboratoristic exams, including coagulation, liver and renal function tests, were within normal values.

Following high-dose intravenous proton pump inhibitor administration, blood transfusion and hemodynamic stabilization, emergent esophagogastroduodenoscopy (EGD) under monitored anaesthesia care was performed. A moderate amount of fresh blood within the stomach was noted and fully aspirated. The retroflexion maneuver revealed varicose shaped pulsating and tortuous submucosal vessels in the gastric fundus without active bleeding. A small erosion overlying one of the vessels consistent with an area of recent healed rupture was noted (Figure 1). Given the absence of clinical or laboratory signs of portal hypertension, we decided to perform emergent computed tomography-angiography (CTA) in order to further characterize the fundic lesion and to look for signs of portal hypertension. SAT and tortuous arterial structures emerging from the left gastric artery (LGA) and the left gastroepiploic artery (LGEA) in the gastric fundus were showed. No signs of active bleeding were observed (Figure 2). 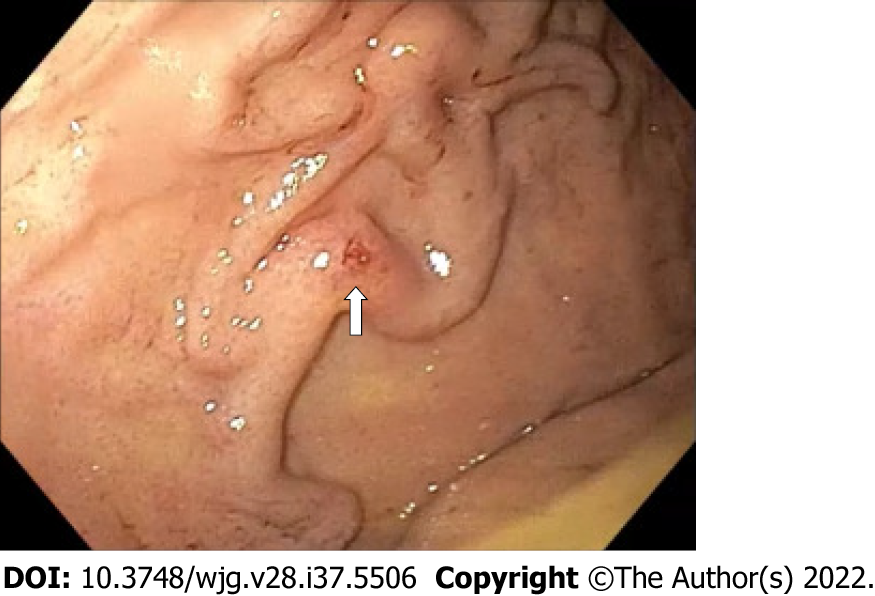 Given the high-risk of massive early rebleeding due to the presence of a small erosion overlying one of the GSAC vessels, we decided to attempt therapeutic EGD in order to provide definitive treatment in a more stable non-emergent setting. The patient was informed that in case of luminal bleeding control failure, emergent transcatheter arterial embolization (TAE) would be performed by the pre-alerted interventional radiologist. Immediately after the first endoclip application downstream to the mucosal erosion, spurting bleeding started. Hemostasis was achieved by means of two endoclips placement upstream to the mucosal defect. Finally, two endoclips were further prophylactically positioned (Figure 3 and Video 1).

No rebleeding was observed following the endoscopic treatment. However, the patient refused splenectomy for definitive treatment. Therefore, after multidisciplinary evaluation, involving GI endoscopist, surgeon, diagnostic and interventional radiologist, a minimally-invasive approach with elective TAE was planned.

Operative angiography showed SAT with multiple collateral arteries arising from the LGA and the LGEA and projecting in the gastric fundus (Figure 4). Selective TAE of the LGA collaterals with trisacryl gelatin microspheres (Embospheres, Guerbet Biomedical, Louvres, France) was effectively realized.

Post-operative stay was complicated by splenic infarction, responsive to conservative treatment (Figure 5). The patient underwent hematology consultation and thrombophilic disorders were excluded. No rebleeding occurred. The patient was discharged with stable haemoglobin value (9.1 g/dL) on post-operative day 18. No rebleeding was observed at 12-mo follow-up. 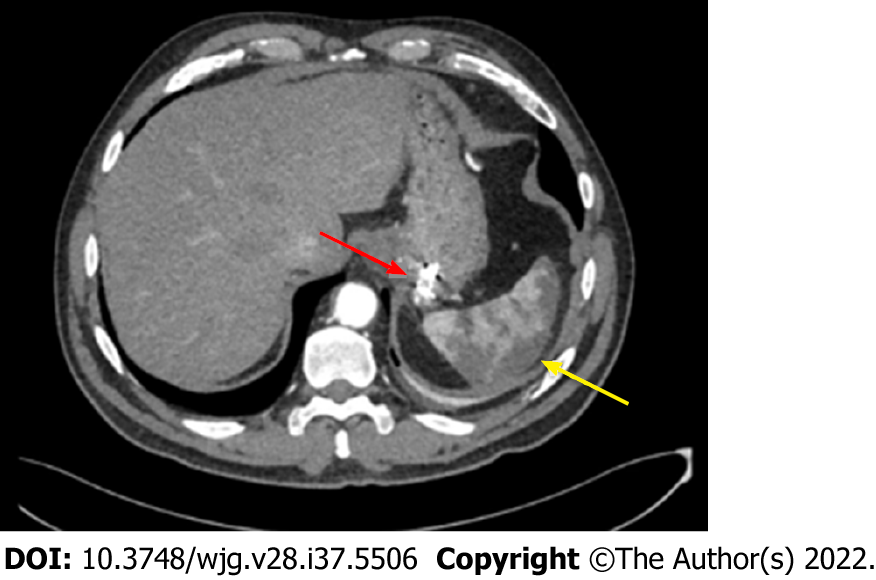 GSAC are an extraordinary rare cause of massive UGIB. They are not related to portal hypertension, resulting from either occlusion or congenital absence of the SA. SAO may be congenital, idiopathic, or secondary to various conditions such as surgery, endovascular procedure, trauma and extrinsic compression. In the case of SAO, in order to provide splenic blood supply, extensive collaterals may arise from adjacent proximal patent arteries, such as the pancreatic, left gastric, gastroepiploic, and short gastric arteries and pass through the gastric wall[6]. Collateral supply may be clinically asymptomatic or may less frequently present with massive UGIB from erosion of GSAC.

The differential diagnosis of GSAC includes mainly isolated gastric varices (IGV). Gastric vascular lesions due to collaterization of an occluded splenic artery may have a very similar endoscopic appearance to IGV and can be easily misinterpreted on EGD. However, they are, as opposed to GSAC, due to cirrhotic portal hypertension or splenic vein obstruction resulting in left-sided portal hypertension[7,8]. Therefore, an accurate differential diagnosis between these two entities is crucial. Indeed, endoscopic cyanoacrylate glue injection (ECGI), currently recommended as the first-line treatment for bleeding IGV[9], is associated with a significant risk of systemic embolization and life-threatening adverse events in case of direct arterial injection of cyanoacrylate[10-12]. Finally, fatal arterial embolic complications in hepatolienogastric blood supply have been reported during ECGI to a non-variceal bleeding source[13-16]. A high level of diagnostic certainty is thus required before proceeding with ECGI.

We performed a comprehensive literature search of PubMed/MEDLINE and EMBASE electronic databases up to March 2022, identifying 10 case reports of GSAC secondary to SAO (Table 1).

In 1984, Spriggs[17] first reported a case of severe UGIB due to GSAC secondary to SA congenital absence[17]. The diagnosis was made by arteriography and the treatment consisted in splenectomy followed by partial gastrectomy due to rebleeding. Later on, a similar case was reported, effectively treated by means of splenectomy after ligation of the LGA[18].

In 2000, Baron et al[19] reported a case of bleeding GSAC secondary to post-traumatic SAO. It was diagnosed by operative angiography and successfully treated by splenectomy and partial gastric devascularization[19]. Subsequently, Worthley and colleagues described a case of UGIB secondary to SAO due to previous SA aneurysmectomy. As previously reported, it was managed by angiography followed by splenectomy with ligation of the splenic vein and artery together with the left gastric and short gastric arteries[20].

In 2004, Cyrany et al[21,22] illustrated the first case of massive UGIB from GSAC secondary to SAT successfully managed endoscopically. Of interest, pre-operative diagnosis was made by endoscopy only, and treatment consisted in ECGI alone. No rebleeding was observed. However, post-procedural stay was complicated by the occurrence of splenic infarction, treated conservatively[21,22].

Later on, the first case of bleeding GSAC successfully treated by endovascular embolization alone was reported by Mnatzakanian et al[23] Pre-operative accurate diagnosis was made by CTA followed by angiogram, in order to rule out IGV. No procedure-related major adverse events were observed[23]. Few years later, another case successfully managed in a very similar manner was described[24]. Conversely, Al-Balas et al[25] recently reported a case of bleeding GSAC initially managed via TEA and subsequently requiring emergency laparotomy with ligation of a bleeding gastric vessel and splenectomy due to severe rebleeding occurrence[25].

In 2011, von Trotha et al[26] reported a case of bleeding GSAC secondary to idiopathic SAT. GSAC was endoscopically misdiagnosed as type 1 IGV and ECGI with subsequent clipping was performed in order to control active bleeding. Of note, the authors did not clarify the choice for endoscopic clipping adoption in the setting of supposed IGV. Furthermore, as previously reported by Cyrany and colleagues, ECGI was complicated by splenic infarction. A proper diagnosis was subsequently made by CTA and conventional angiography. Interestingly, endoscopic color doppler ultrasonography was adopted to secure the diagnosis and laparoscopic splenectomy was finally provided for the definitive treatment[26].

Up to date, one case only of fatal UGIB due to GSAC has been reported. In this istance, urgent EGD failed to identify the source of bleeding. CTA examination was then performed showing GSAC due to SAT, in the absence of active bleeding. However, after diagnosis, no treatment was provided and death due to recurrent bleeding occurred[27].

Our case is the first report in which bleeding GSAC was effectively treated with endoscopic mechanical hemostasis alone for the luminal bleeding control and subsequent elective TAE for the definitive treatment. Given the absence of active bleeding and portal hypertension signs or history, emergent CTA was performed prior to endoscopic treatment in order to properly characterize the gastric vascular lesion. Following endoscopic treatment neither adverse events nor rebleeding signs occurred. The patient refused splenectomy with or without partial gastrectomy for the definitive treatment. Thus, following multidisciplinary evaluation, elective TAE was planned and effectively realized. Post-operative stay was complicated by splenic ischemia, effectively treated by conservative medical treatment. In our case, the presumed etiology of GSAC was idiopathic SAT. Given the formation of an extensive collateral pathway preserving the splenic perfusion, complete SAO likely occurred gradually.

Gastroenterologists should be aware of this potentially life-threatening, albeit extraordinary rare, source of massive upper gastrointestinal hemorrhage, in order to allow proper management. In our opinion, endoscopic mechanical hemostasis seems to be a safe and effective method for the luminal bleeding control across referral centers. Conversely, we may not recommend ECGI adoption given the potential occurrence of fatal adverse events due to arterial embolization. CTA appears to be the best modality for a prompt differential diagnosis, and should be performed in all UGIB patients with endoscopic evidence of gastric varicose shaped submucosal vessels and no signs or history of portal hypertension. For the definitive treatment of bleeding GSAC, either a minimally invasive approach with TAE or a standard approach with splenectomy may be provided, taking into account patient preference and status.

We are grateful to Velia De Magistris for English editing.