Gastrointestinal (GI) lipomas are benign submucosal tumors of mature adipocytes that arise mainly in the colon and stomach, sometimes in the ileum and jejunum, and rarely in the duodenum. Patients with symptomatic lipomas require endoscopic or surgical treatment. Spontaneous expulsion of lipomas after biopsy is a rare condition that has limited case reports.

Deep biopsy could lead to spontaneous GI lipoma expulsion. This might be the first step in lipoma diagnosis and treatment.

Core Tip: Gastrointestinal lipomas are benign tumors consisting of mature adipocytes. Symptomatic patients may require endoscopic or surgical treatment. Here, we report a case of duodenal papillary lipoma, which was spontaneously expelled 12 d after a bite-on-bite deep biopsy with forceps. The spontaneous expulsion of the lipoma shows the possibility of performing a deep biopsy as a fenestration in the first step as a diagnostic and therapeutic procedure.

Gastrointestinal (GI) lipomas are benign submucosal tumors of mature adipocytes that are commonly found incidentally on endoscopy and imaging. They arise throughout the GI tract, mainly in the colon (65%-75%), followed by the ileum and jejunum (25%)[1]. The duodenum is a rare site of GI lipomas, with only 4% of lipomas affected, mostly in the second portion of the duodenum[1]. Lipomas are rarely symptomatic and have no malignant potential. However, they occasionally result in hemorrhage, abdominal pain, intestinal intussusception, or obstructive jaundice, which are related to the characteristics of the lipoma, such as its size and location[1,2]. Symptomatic duodenal lipomas require treatment. They can be excised endoscopically or surgically. This report presents a case of duodenal lipoma diagnosed by endoscopic ultrasonography (EUS) that was spontaneously expelled 12 d after a bite-on-bite deep biopsy with forceps.

A 56-year-old Chinese man presented to our gastroenterology department with intermittent postprandial epigastric fullness for half a year.

The patient had early satiety and mild reflux, especially after greasy meals, without abdominal pain, melena, fever, or jaundice. The symptoms were moderate and paroxysmal, which affected his appetite. No weight loss was reported during the past half a year. There was no history of abdominal surgery.

The patient’s past medical history was non-contributory.

The patient has none family history.

On physical examination, the patient’s vital signs were stable with a 37.2 °C body temperature on admission. The subject’s height was 170 cm and weight was 80 kg, with body mass index of 27.68 kg/m2. No obvious abnormalities were observed upon pulmonary and cardiac examination. There was no tenderness, mass, unusual bowel sounds, or Murphy’s sign upon abdominal examination. No jaundice or superficial lymphadenopathy was observed.

The analyses of complete blood count, blood biochemistry, and serum tumor marker levels were within the normal range. 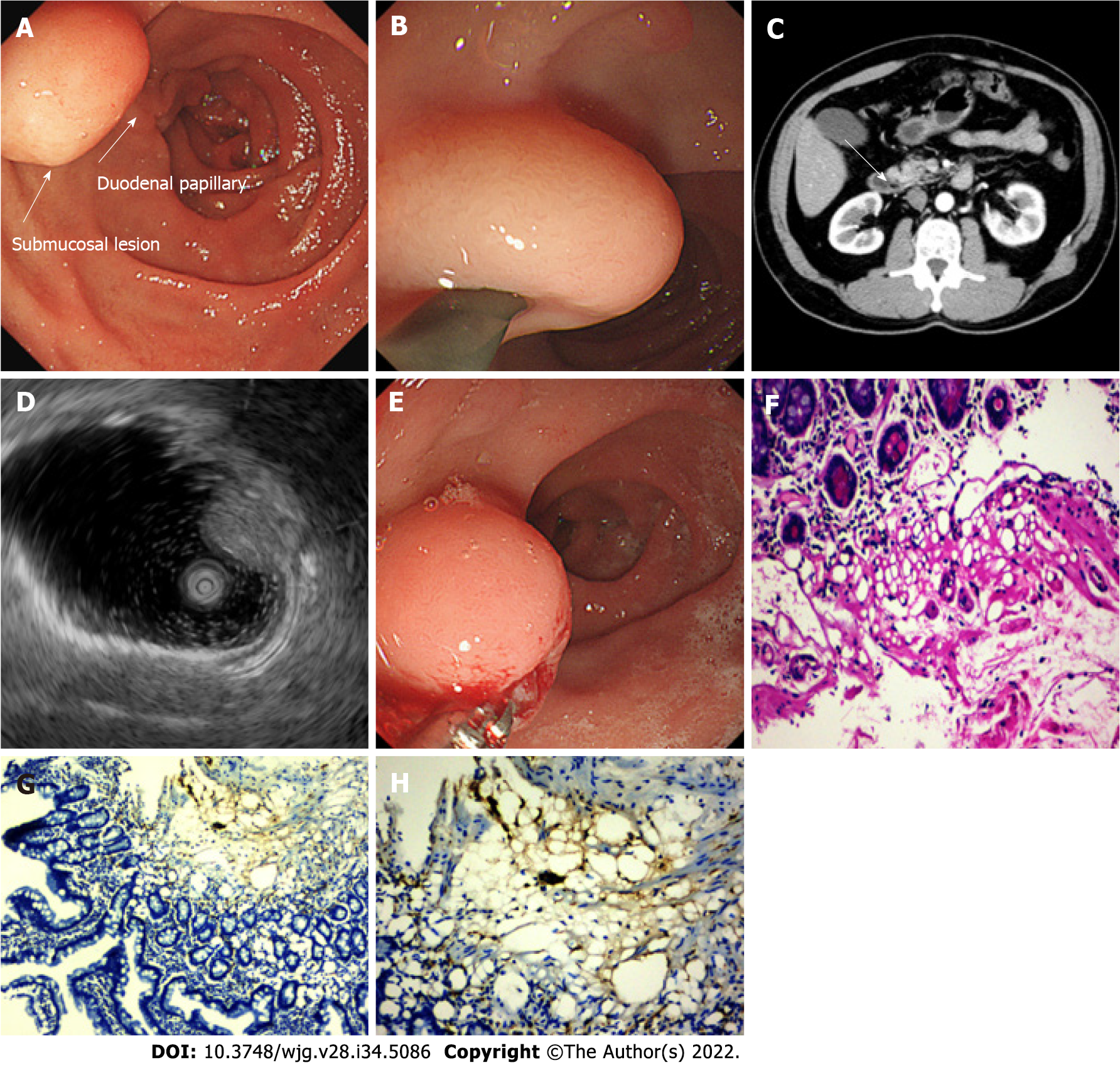 Deep biopsy was performed via the bite-on-bite technique using forceps (Micro-Tech Co. Ltd., Nanjing, China) (Figure 1E). Microscopic examination showed a small amount of roundish adipocytes in the submucosa layer, expressing S-100. Tiny lipid droplets were observed in cell cytoplasm. The glands of epithelium were neatly arranged on top. The small fragments of biopsy compatible with a submucosal lipoma. (Figures 1F-H). Based on the classic endoscopic signs, EUS characteristics and histology of the lesion, a diagnosis of duodenal lipoma was made. No bleeding, perforation, or any other complications were observed the patient.

During endoscopy, the patient underwent neither resection nor hemostatic procedures after the biopsy. Prokinetics and proton pump inhibitor were prescribed to relieve the symptoms. Considering the size and location of the lipoma, we suggested that the patient remain under observation. However, the patient was extremely anxious about the lesion and insisted on its removal; thus, endoscopic resection and prophylactic pancreatic duct stenting were attempted.

The patient reported milder symptoms and fewer episodes after prescription. However, he insisted on resection. On endoscopic resection, which was 12 d after the biopsy, the lipoma had disappeared, with only a red scar and inflammatory mucosa residue in situ of the lesion (Figures 2A and B). Two months after the first EUS, a follow-up EUS was performed, showing that macroscopically the site displayed signs of inflammation and scarring. And the former lesion no longer existed in the surrounding duodenal wall in EUS (Figures 2C-E). After endoscopy, mild symptoms occasionally occurred during the follow-up period, without medications. 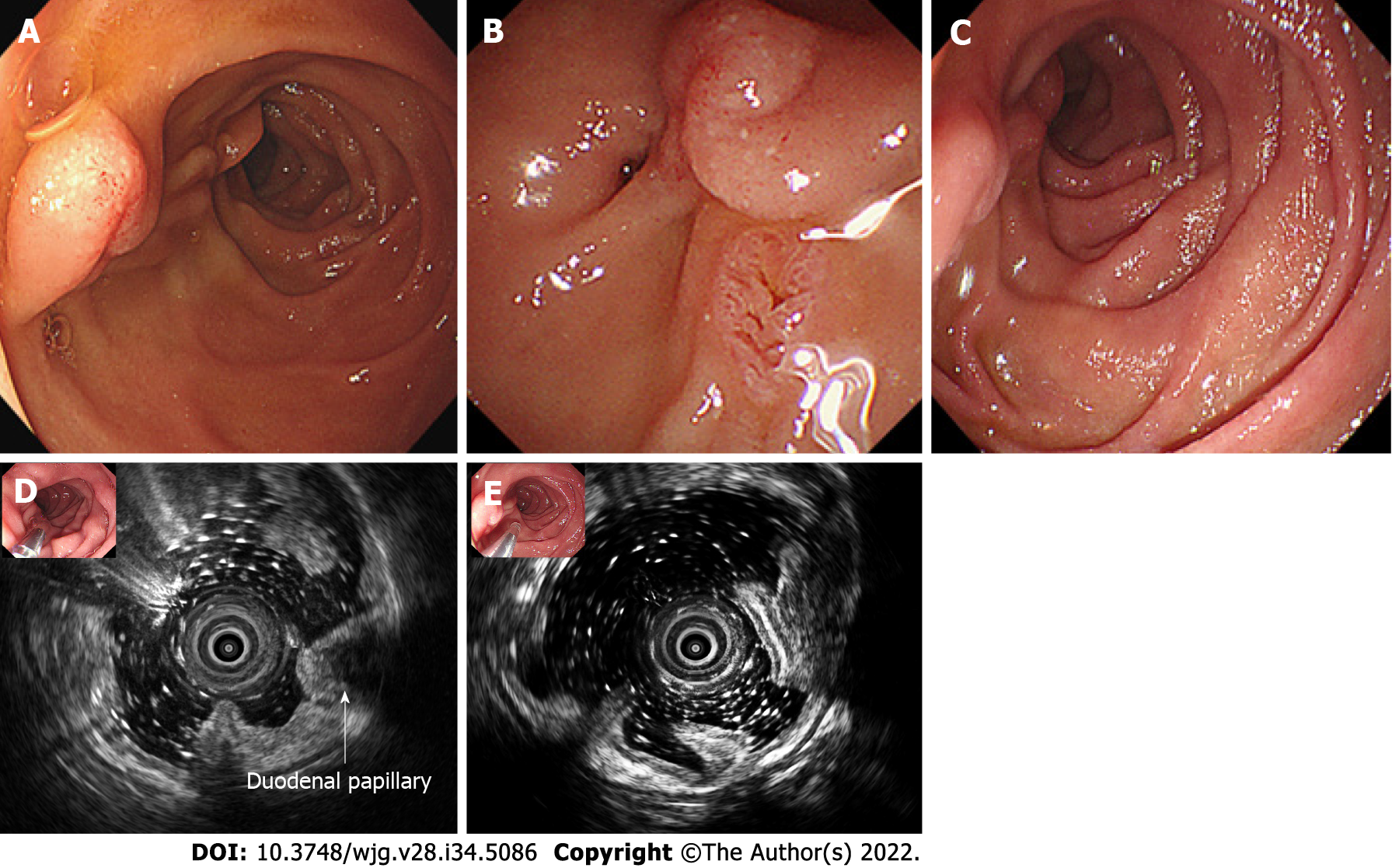 Figure 2 Follow-up endoscopic view of the lesion. A and B: 12 d after the biopsy, the lipoma was spontaneously expelled, with red scar and inflammatory mucosa residue in situ of the lesion; C-E: Follow-up endoscopic ultrasonography after 2 mo revealed that the in situ mucosa was smooth, and the former lesion no longer existed in the surrounding duodenal wall or periduodenal papilla region.
DISCUSSION

Duodenal lipoma is a rare benign tumor of the GI tract accounting for 4% of GI lipomas, most of which occur in the second portion of the duodenum[1,2]. Duodenal lipoma can be symptomatic or asymptomatic, depending on the size and location. Moreover, 80% of symptomatic duodenal lipomas have a diameter of > 2 cm, mainly manifesting as intestinal obstruction, hemorrhage, and jaundice[2,3]. The tumor in our case was a submucosal lipoma, which accounts for > 90% of intestinal lipomas, with the others arising from the intermuscular tissue and subserosa[4]. Imaging of lipomas is well recognized. CT shows well-defined border tumors in a uniform low density with fat attenuation of -120 HU to -60 HU, while magnetic resonance imaging shows high-intensity lesion with on T1-weighted, iso-signal intensity on T2-weighted, and low intensity on fat-suppressed T2-weighted imaging[5,6]. The classic endoscopic signs as “pillow sign,” “tenting sign,” and “naked fat sign” indicate the possibility of lipomas. The typical EUS finding for submucosal lipomas is a homogeneous hyperechoic mass originating from the submucosal layer, with echo attenuation behind and/or inside the rear area[7]. In our case, the duodenal lipoma was present in the second portion of the duodenum, immediately upon the duodenal papilla, with classic imaging on EGD, CT, and EUS, with pathologically confirmation.

Symptomatic lipomas require treatment, including removal via endoscopy or surgical excision. There are four techniques for endoscopic excision: Dissection-based resection, endoscopic mucosal resection (EMR), loop-assisted resection, and unroofing[8] (Figure 3). Dissection-based resection defines as endoscopic procedure mainly using dissection-based techniques, such as ESD. Loop-assisted resection is the procedure performed with loop for haemostatic or removal reasons. Because of the poor conduction of electric current in the adipose tissue, endoscopists must apply a higher electrical output during resection, which increases the possibility of complications, such as hemorrhage and perforation, especially for giant lipomas. The unroofing technique, which cuts off the upper half of the lesion, with the remaining adipose tissue extruded from the open surface, was first applied by Mimura et al[9]. Its efficacy and safety have been approved by several authors in case reports[10-14]. Bronswijk et al[8] collected 24 studies (77 lesions included) of endoscopic treatment for colon lipomas, and a systematic review indicated that endoscopic resolution rates were 60%, 100%, 93.6%, and 93.1% for unroofing, dissection-based resection, EMR, and loop-assisted resection, respectively. The former two techniques reported no adverse events, whereas the latter two showed complication rates of 12.9%-13.8%. Yamamoto et al[15] proposed a two-step hybrid technique that combined endoscopic unroofing with EMR for giant lipomas.

Spontaneous disappearance or expulsion of lipomas is an extremely rare manifestation that had limited case reports. There have been some cases of spontaneous expulsion per rectum of submucosal lipomas without any intervention. With a certain volume, these submucosal lipomas cause intussusception, which might lead to ischemia, necrosis, and breakage, and the lipomas were spontaneously expelled[4,16-20]. In our case, the lipoma was spontaneously expelled after deep biopsy via the bite-on-bite technique with forceps, which we suspected was the result of fat extravasation from the biopsy site as fenestration over time. There were a few cases of spontaneous expulsion after biopsy of GI lipoma[21-24]. Kurahara et al[21] first reported a gastric lipoma that was expelled after biopsy. Ishiyama et al[22] reported the expulsion of a colonic lipoma after biopsy. We speculated that, in these cases, three conditions need to be met for the lipoma to disappear: (1) The overlying mucosa and tumor capsule must be damaged by either acquired opening, such as unroofing and deep biopsy, or spontaneous opening, such as ischemia and ulceration; (2) The lipoma should arise from the submucosal layer; and (3) The extravasation rate, which depends on the tumor volume and size of the fenestration, should be faster than the mucosal healing rate. In this case, the special anatomical position might have facilitated pancreatic lipase and bile digestion of the lipoma to speed up the discharge process.

The treatment techniques and cases of spontaneous expulsion lipomas indicate that we might conduct a deep biopsy based on bite-on-bite techniques or more intense “tunneled biopsy” as fenestration routinely when a lipoma is diagnosed with typical EUS and EGD. Such biopsies could aid in further diagnosis in pathology and reduce the size or even remove the lesion as a treatment, particularly in cases where the lesion is relatively large or located in the small intestine[25]. A simple deep biopsy during diagnosis might decrease the complications caused by the lesion itself or by the next step of endoscopic or surgical resection. Larger studies are necessary to make conclusion on the efficacy of fenestration on lipoma and algorithm of treatment.

In this case, we present the spontaneous expulsion of a duodenal lipoma 12 d after a bite-on-bite deep biopsy. Treatments for benign and slow-growing tumors include endoscopic dissection-based resection, EMR, loop-assisted resection, endoscopic unroofing, and surgical resection. The expulsion of lipoma after biopsy enlightens us the possibility of taking a deep biopsy as a fenestration in the first step as the diagnostic and therapeutic procedure.

Yi-Miao Zhu would extend her sincere gratitude to Yuan Chen for his careful review of the pathology, valuable suggestions, and inspiring advice of the case. Special thanks should go to her beloved husband for his continuous support and encouragement.