Adenocarcinoma originating from heterotopic pancreas tissue is a rare disease. Furthermore, to our knowledge, no HER2-positive cases in the duodenum have been reported in the scientific literature nor has the efficacy of trastuzumab treatment for the disease been reported.

A 65-year-old woman whose clinical diagnosis was unresectable advanced duodenal cancer with HER2 overexpression responded well to trastuzumab chemotherapy. The main tumor in the duodenum reduced drastically. The patient underwent pancreaticoduodenectomy and lymph node dissection. A small number of cancer cells remained in the submucosal layer of the duodenum and pancreas head. After histological and immunohistochemical examination, the patient was diagnosed with duodenal adenocarcinoma originating from heterotopic pancreas tissue.

Trastuzumab treatment is effective in HER2-positive adenocarcinoma originating from heterotopic pancreas tissue in the duodenum.

Core Tip: Adenocarcinoma that develops from heterotopic pancreas tissue in the duodenum is a very rare disease. Therefore, standard chemotherapy regimens to treat these patients have not been established. A 65-year-old woman presented with unresectable duodenal cancer with HER2 overexpression. Because the patient responded well to trastuzumab chemotherapy, pancreatoduodenectomy was performed. Histology and immunohistochemistry assessments revealed that the cancer developed from heterotopic pancreas tissue in the duodenum. The findings of this case suggest that HER2 status should be examined in duodenal adenocarcinoma to determine the indication for targeted therapy. Trastuzumab chemotherapy is effective for heterotopic pancreatic adenocarcinoma but not orthotopic pancreatic cancer.

The patient presented with epigastric discomfort that had persisted for 3 mo.

A 65-year-old woman complained of abdominal discomfort and had visited the hospital previously. Esophagogastroduodenoscopy revealed an advanced type 4 lesion in the pylorus of the stomach. The patient received a detailed medical examination and treatment at the current hospital.

The patient had an appendectomy due to acute appendicitis at the age of 15.

The patient had no smoking or alcohol intake history. There was no family history of cancer.

The abdomen was soft and without tenderness.

An abdominal computed tomography (CT) scan demonstrated wall thickening in the duodenal first portion extending toward the pylorus and pancreatic head (Figure 1A). Lymph node swelling in the common hepatic artery and in the portal vein and venous tumor thrombosis in the pancreatic head were also observed. There was no gross tumor mass in the orthotopic pancreas. The patient was referred for gastroduodenoscopy. The tumor was located in the first portion of the duodenum with ulcer formation (Figure 1B). The stomach pylorus was stenotic due to the extrinsic compression of the tumor. Histologic evaluation of the duodenum biopsy specimens revealed tubular adenocarcinoma, and HER2 overexpression was detected by immunohistochemistry (Figure 2). The clinical diagnosis of unresectable duodenal cancer was made based on cancer invasion of the pancreas and portal vein tumor thrombosis; thus, stomach bypass surgery and gastrojejunostomy were performed. Capecitabine and cisplatin plus trastuzumab chemotherapy was applied due to the potential efficacy of this treatment for HER2-overexpressing gastric cancer cells reported in the Trastuzumab for Gastric Cancer (ToGA) study. After 1 cycle of treatment, the patient developed renal impairment due to the side effects of cisplatin. The drug combination was changed to capecitabine and oxaliplatin plus trastuzumab. To assess the effects of treatment, a CT scan was performed after 2 cycles of capecitabine and oxaliplatin plus trastuzumab administration, and tumor size and lymph node swelling were dramatically reduced (Figure 3). The same chemotherapy was continued for two more cycles, and then pancreatoduodenectomy was conducted. No obvious tumor was visible in the duodenum or liver and there was no peritoneal metastasis.

Figure 1 Abdominal computed tomography and gastroduodenoscopy. Images were obtained before the start of treatment. A: An axial image shows an irregular circumferential mass in the first portion of duodenum (orange arrows), with transmural extension to pylorus (blue arrow) and direct extension to pancreas head (yellow arrow heads); B: During gastroduodenoscopy, mass lesion with ulcer was visible in the first portion of duodenum. 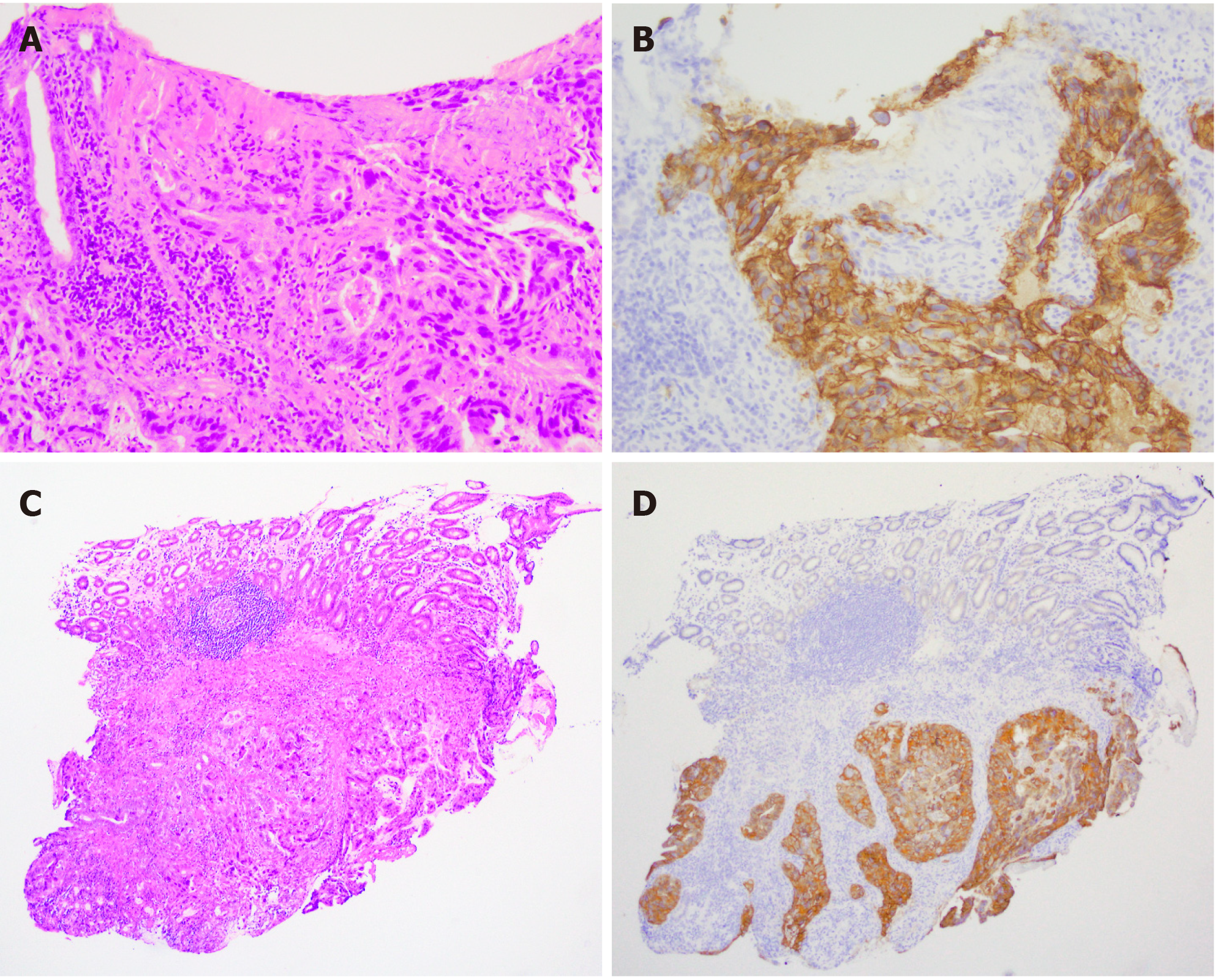 Figure 3 Abdominal computed tomography and gastroduodenoscopy. Images were obtained after 2 cycles of trastuzumab treatment. A: An axial image shows an irregular mass lesion in the pancreas head (orange arrows), duodenal and pylorus lesion are disappeared; B: During gastroduodenoscopy, mass and ulcer lesion were vanished in the first portion of duodenum.
Pathological examination

The histological evaluation of the biopsy specimens from the gastroduodenoscopy revealed an adenocarcinoma mass predominantly located in the duodenal submucosa (Figure 2). The cancer cells were strongly positive for HER2 membranous expression on immunohistochemical analysis (+3). On gross examination of the resected duodenum, no discrete mass lesion was visible, but a flat, slightly elevated mucosal fold was present in the first portion of the duodenum. On histological assessment, carcinoma cells were localized in the duodenal submucosal layer, forming small nodules, and in the pancreas head and pancreaticoduodenal lymph nodes (Figure 4A and B, data not shown). Heterotopic pancreas tissue was located close to the carcinoma cells within the submucosal layer and laminar muscularis mucosa of the duodenum, composed of acinar and duct structures (Figure 4C). In the immunohistochemical analysis, the cancer cells showed positive staining for cytokeratin (CK)7, CK20, MUC1 and MUC5AC and negative staining for MUC2 and CDX2 (Figure 5A-D and data not shown). Positive staining for MUC6, a specific marker for Brunner gland adenocarcinoma, was positive in the Brunner glands but negative in the cancer cells (Figure 5E)[8]. 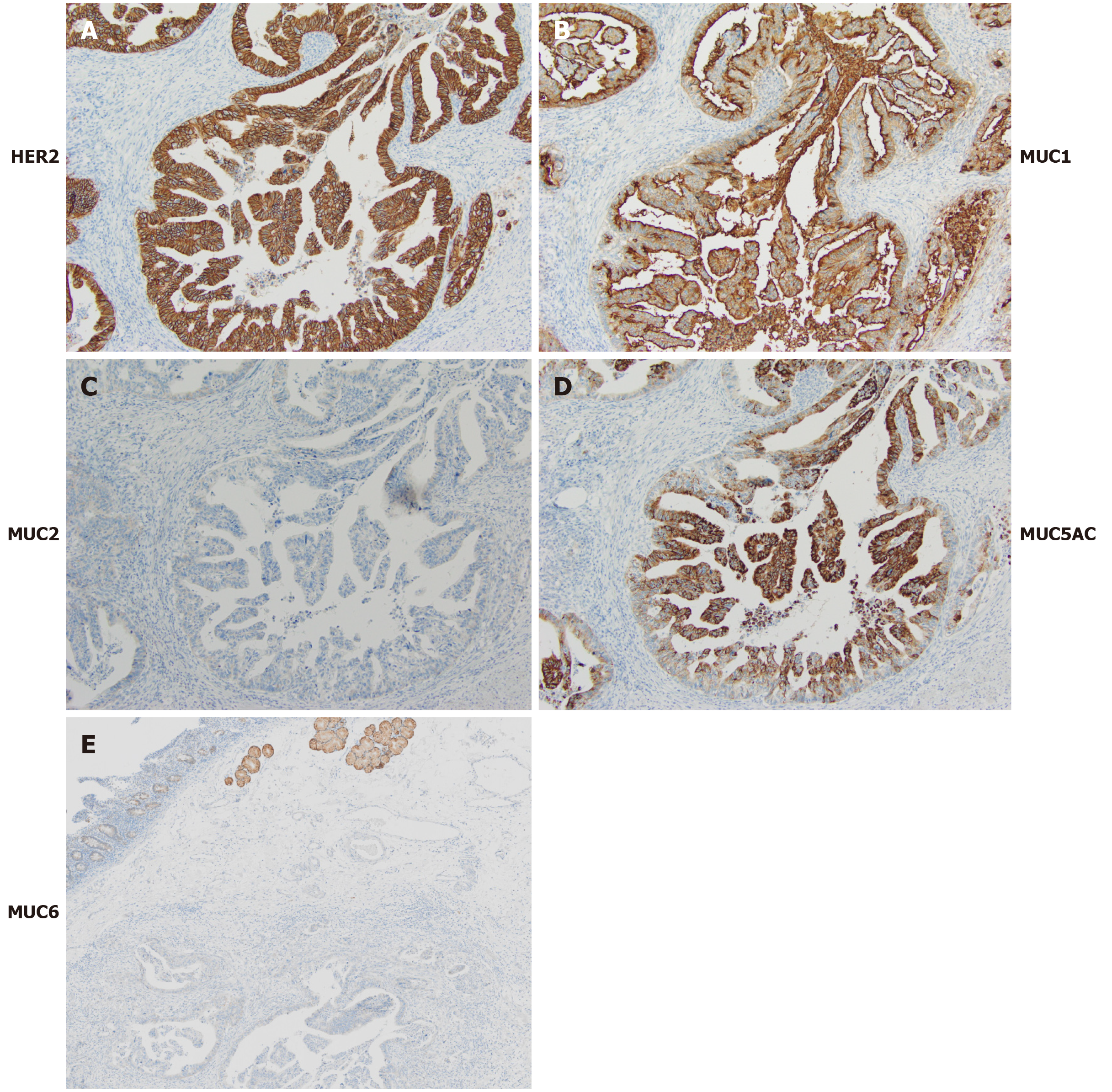 Figure 5 Immunohistochemical staining in adenocarcinoma cells in the submucosal layer. A: Strong HER2 expression is localized in the cell membrane (× 100); B-E: Adenocarcinoma cells express MUC1 and MUC5AC but no MUC2 or MUC6 protein (B-D: × 100; E: × 3.5).
FINAL DIAGNOSIS

These findings indicated that the carcinoma cells were of pancreatic duct origin[9-11] and are consistent with the diagnosis of adenocarcinoma arising from heterotopic pancreas tissue within the duodenum. The residual cancer cells were positive for HER2 on immunohistochemical analysis (Figure 5A).

Various chemotherapies were given after surgery as follows: 1 cycle of capecitabine and oxaliplatin and 6 cycles of capecitabine. In the CT examination for evaluating chemotherapy, retroperitoneal lymph node enlargement, implying cancer metastasis, was revealed. Progressively, 3 cycles of paclitaxel, 4 cycles of S-1 and oxaliplatin plus trastuzumab, and 2 cycles of S-1 plus trastuzumab were administered. Thereafter, trastuzumab monoadministration was conducted. Chemotherapy-induced side effects guided the changes in drug selection.

We describe a case of HER2-positive adenocarcinoma that developed in heterotopic pancreas tissue in the duodenum and outline the efficacy of HER2-targeting therapy for this disease for the first time in the English literature. Guillou et al[3] proposed the following three conditions for the definition of carcinoma arising from heterotopic pancreas tissue: (1) The tumor must be found within or close to the ectopic pancreatic tissue; (2) Direct transition between pancreatic structures and carcinoma must be observed; and (3) The nonneoplastic pancreatic tissue must comprise fully developed acini and ductal structures. In our case, the second condition, the transition between pancreatic structures and carcinoma, was not fulfilled completely; however, the desmoplasia of pancreatic cancer destroys the tissue architecture, making it impossible to identify the histological transition. Guillou et al[3]’s report included inconsistent statements; the term "close to" was used in the first condition and "direct transition" was used in the second. Furthermore, given the expanding knowledge within the field of pancreatic cancer immunohistochemistry since Gulliou et al[3]’s study was published, we propose a replacement for the second Gulliou et al[3] criterion as follows: Direct transition between pancreatic structures and carcinoma is observed; alternatively, cancer cells express proteins indicating pancreatic origin.

Since chemotherapy against HER2-positive cancer improved the outcome of breast cancer patients, an extensive search was conducted to elucidate the incidence of HER2-expressing pancreatic cancer (ductal adenocarcinoma). The incidence of pancreatic cancer with +3 membranous HER2 protein expression ranges from 6% to 12% in the literature[12-14]. Using the same approach to investigate the use of Herceptin combined chemotherapy for metastatic pancreas cancer, Safran et al[13] reported modest a benefit to overall survival, but Harder et al[14] found no such beneficial results. Harder et al[14] conducted a phase II trial of trastuzumab and capecitabine, the same drug combination administered to our patient, for metastatic pancreatic cancer. The therapeutic efficacy of HER2 chemotherapy in the current case supports the theory that HER2 overexpression drives cancer progression. The mechanism of cancer cell proliferation might differ between heterotopic and orthotopic pancreatic cancer. Given that HER2 is one of the EGFR family receptors, HER2 shares the same two main downstream signaling pathways as other EGFR receptors, the RAS-MAPK and PI3K-AKT-mTOR pathways[15]. The most reliable explanation of the failure of HER2-targeted therapy is that many pancreatic cancers possess KRAS mutations, which lead to cancer cell proliferation regardless of HER2 inactivation. The cancer in the current case had no KRAS mutation, which supports the rationale for HER2-targeted chemotherapy (data not shown). However, the current case also revealed the limitation of the therapy, since residual cancer was observed in the submucosal layer of the duodenum, lymph nodes and desmoplastic stroma in the pancreatic head. Similar to orthotopic pancreatic ductal adenocarcinoma, in the current case, the cancer cells penetrated the pancreatic parenchyma and developed a tumor microenvironment that supported cancer cell growth, invasion, and metastasis, which contribute to therapeutic resistance[16].

Trastuzumab therapy is the first-line treatment for patients with HER2-overexpressing cancer, but the mechanism of therapy resistance has not been completely established. Biological heterogeneity or clonal evolution could be the underlying mechanism. By analyzing the mechanism involved in trastuzumab resistance, targeted capture sequencing of the circulating tumor DNA (ctDNA) of advanced gastric cancer patients and a clone structure reconstruction approach were conducted[17]. Most of the gene mutation clones were concentrated in the MAPK and RAS pathways. This approach to identifying cancer gene mutations with ctDNA analysis could help to identify new targeted therapies for trastuzumab-resistant cancer patients.

HER2-positive unresectable adenocarcinoma that developed from heterotopic pancreas tissue in the duodenum was treated with trastuzumab. HER2-targeted treatment was effective for reducing the tumor volume sufficiently for surgical resection.