Adult pancreatoblastoma is an exceptionally rare malignant tumour of the pancreas that mimics other solid cellular neoplasms of the pancreas, which may pose diagnostic difficulties. Because of its rarity, little is known about its clinical and pathologic features. This article reviews the clinical and pathologic features of pancreatoblastoma in adults including differential diagnosis, treatment, and follow-up. Although pancreatoblastoma commonly occurs in childhood, there have now been more than 70 adult pancreatoblastomas described in the literature. There is a slight male predominance. There are no symptoms unique to pancreatoblastomas and adult patients are frequently symptomatic. The most common presenting symptom is abdominal pain. Grossly, the tumours are often large and well-circumscribed. Microscopically, pancreatoblastomas are composed of neoplastic cells with predominantly acinar differentiation and characteristic squamoid nests. These tumours are positive for trypsin, chymotrypsin, lipase, and BCL10. Loss of heterozygosity on chromosome 11p is the most common molecular alteration in pancreatoblastomas. Adult pancreatoblastomas are aggressive tumours with frequent local invasion, recurrence, and distant metastasis. Treatment consists of surgical resection. Chemotherapy and radiotherapy may have a role in the treatment of recurrent, residual, unresectable, and metastatic disease. It is important to distinguish pancreatoblastomas from morphological mimics such as acinar cell carcinomas, solid pseudopapillary neoplasms, and pancreatic neuroendocrine neoplasms.

Core Tip: Adult pancreatoblastomas are extremely rare tumours of the pancreas. They are composed of neoplastic cells with multiple lines of differentiation and characteristic squamoid nests. They mimic other neoplasms of the pancreas, which may give rise to diagnostic difficulties. This article provides an up-to-date review of the clinical and pathologic features of pancreatoblastoma in adults, including differential diagnosis, treatment, and follow-up.

Pancreatoblastoma is a malignant epithelial neoplasm of the pancreas composed of cells with predominantly acinar differentiation and characteristic squamoid nests. Neuroendocrine, ductal and less commonly, mesenchymal differentiation can be seen but are often less extensive[1-3]. Less than 1% of pancreatic neoplasms are pancreatoblastomas[4,5]. Pancreatoblastoma commonly occurs in childhood, accounting for 25% of pancreatic neoplasms occurring in the first decade of life, with a mean age of approximately 4 years[1].

Adult pancreatoblastoma is extremely rare. Hence, little is known about its clinical and pathologic features. Furthermore, pre-operative diagnosis can be quite challenging because of the considerable overlap with other cellular neoplasms of the pancreas.

This article provides an up-to-date review of the clinical and pathologic features of pancreatoblastoma in adults, including cytology, molecular pathology, differential diagnosis, treatment, and follow-up.

Adult pancreatoblastomas are exceptionally rare. To date, only 74 adult pancreatoblastomas have been reported in the literature, mostly in the form of isolated case reports and small series[6-10]. The mean age at diagnosis is 41 years (range, 18-78 years). There is a slight male predilection, with a male-to-female ratio of 1.2:1.

The aetiology is unknown. Although most tumours are sporadic[11-15], few adult pancreatoblastomas have been described in the setting of familial adenomatous polyposis (FAP)[8,9]. Rare cases in children have been associated with Beckwith-Wiedemann syndrome[16,17].

Most patients are symptomatic, with very few cases discovered incidentally during routine examination and imaging[4,10,11]. There are no symptoms unique to pancreatoblastomas. The most common presenting symptom is abdominal pain[2]. Other clinical features include abdominal mass, weight loss, nausea, jaundice, and diarrhoea[6,14,15,18,19]. Rarely, patients may present with upper gastrointestinal bleeding[12].

Elevated serum levels of CA19-9[14,15] as well as corticotropin releasing hormone secretion[20] rarely occurs in adult pancreatoblastomas. Serum alpha fetoprotein (AFP) is elevated in some pancreatoblastomas[4,7,13,21,22]. In addition, AFP may be detected immunohistochemically in tumours associated with elevated serum levels of AFP[3,4,22]. Serum AFP is frequently elevated in children[4,10,13] with levels often in excess of 1000 μg/L[3]. In contrast, AFP is not consistently elevated in adults[2,7,10,13]. When present, elevated serum AFP has been used as a marker of tumour recurrence or disease progression because AFP levels should decrease or normalize with successful treatment[7,13,21].

It is important to note that elevated AFP is not specific for pancreatoblastoma in a patient with a pancreatic mass. Pancreatic ductal adenocarcinomas[23] and pancreatic acinar cell carcinomas[24,25] have been associated with elevated serum AFP. Furthermore, AFP is widely used as a tumour marker for hepatocellular carcinoma (HCC). However, the limitations of AFP in detecting HCC includes the poor sensitivity in detecting small tumours and elevated levels of AFP in patients with chronic liver disease without HCC. To overcome this limitation, the Lens culinaris agglutinin-reactive AFP (AFP-L3) has been found to be highly specific and useful not only for early detection of HCC but also for predicting the risk of development of HCC in patients with chronic liver disease[26,27]. However, AFP-L3 or other isoforms of AFP are yet to be extensively studied in pancreatoblastomas.

Malignant behaviour is prominent in adult pancreatoblastomas. Approximately 59% of adult patients with pancreatoblastoma develop metastases at the time of diagnosis or afterwards in the course of the disease. The liver is the most common site of metastasis[2,12,15,28] followed by lymph nodes[4,5,29], and lung[4,5,7,15]. Chest wall[5], breast[15], bone[30], and brain metastases[31] are extremely rare. Tumours can invade adjacent structures such as the duodenum, spleen, common bile duct, portal vein, and superior mesenteric vessels[2,4,7,19,29].

There are no significant differences in the imaging findings of adult and paediatric patients[2,32]. Pancreatoblastomas are large well-defined heterogenous masses with low to intermediate signal intensity on T1-weighted images and high signal intensity on T2-weighted images. Enhancement is a common feature on contrast-enhanced computed tomography images and may be present on magnetic resonance imaging. Calcifications when present may be rim-like or clustered[19,33]. On ultrasound, pancreatoblastomas are well-demarcated solid masses inseparable from the pancreas with mixed echogenicity[33].

Fine needle aspiration specimens are composed of cellular singly dispersed and/or clustered polygonal cells. The cells have round to oval nuclei with fine chromatin pattern, small indistinct nucleoli, and moderate amounts of amphophilic or eosinophilic cytoplasm[3,9]. Squamoid nests or corpuscles are best appreciated in cell block preparations. They are composed of plump epithelioid cells with abundant cytoplasm[7,9].

Grossly, the tumours are solitary, solid, well-circumscribed, and often encapsulated. Pancreatoblastomas are usually large, averaging 8 cm in diameter (range, 1.8–30 cm)[2,3,6]. On cut section, the tumours have yellow to tan fleshy lobules separated by dense fibrous bands. Foci of haemorrhage and necrosis may be present. Rarely, pancreatoblastomas may undergo cystic change or show gross extension into the adjacent peripancreatic soft tissue[4].

Microscopically, pancreatoblastomas are composed of cellular well-delineated lobules separated by dense fibrous bands, often imparting a geographic low power appearance (Figure 1A). The dense fibrous bands between the lobules are composed of spindled cells with varying amounts of collagen (Figure 1B). Tumours predominantly show acinar differentiation; however, ductal, neuroendocrine and less commonly, mesenchymal differentiation may be present[1-3]. Solid areas with sheets of cells often alternate with areas with acinar differentiation. The acinar units comprise small cells with granular cytoplasm arranged around central lumina (Figure 1C). The cells have round to oval nuclei with single prominent nucleoli[1,3,4]. 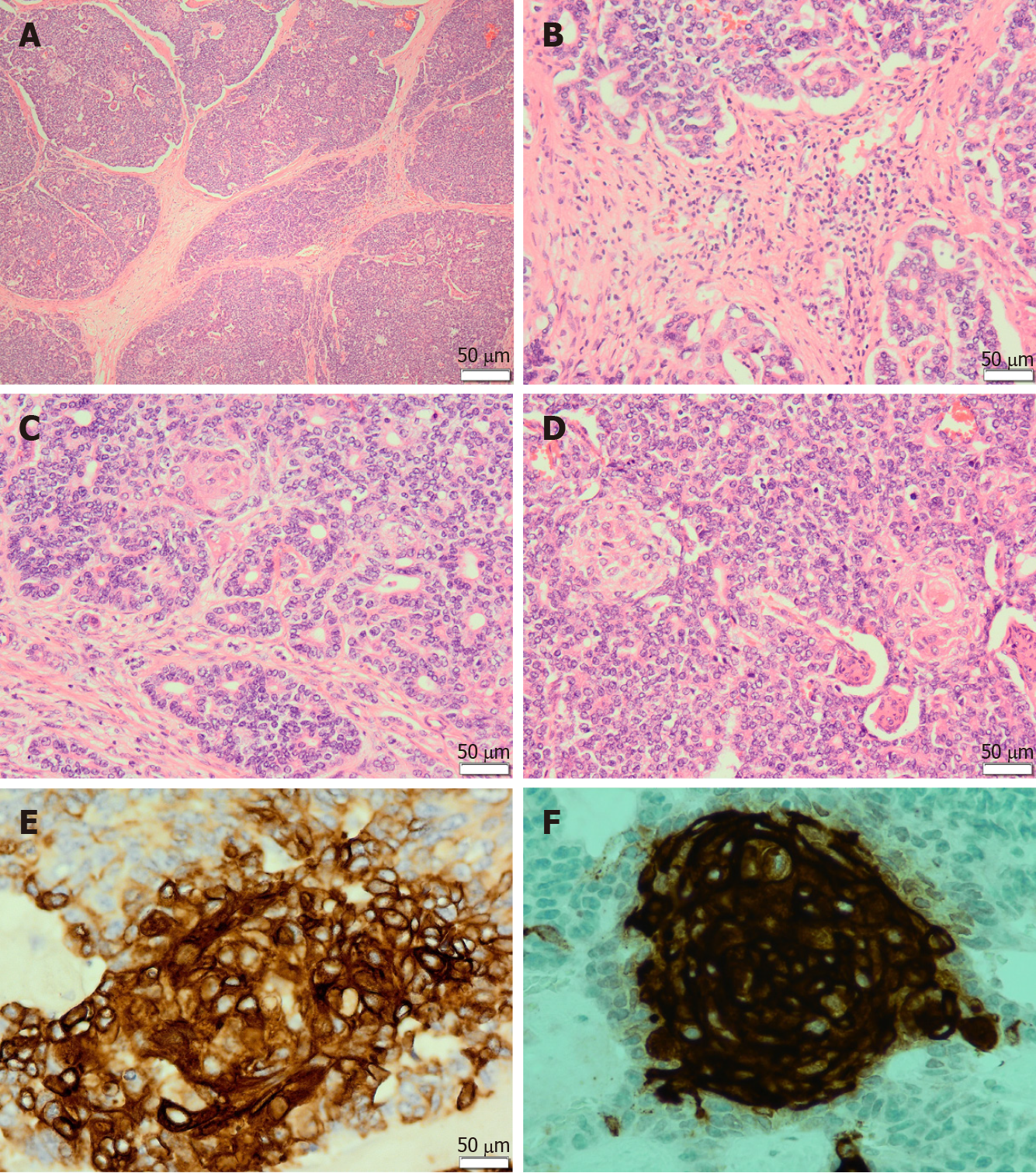 The defining histological feature of pancreatoblastoma is the squamoid nests. Squamoid nests vary from large islands of plump epithelioid cells to whorled nests of spindled cells showing mild to frank keratinization. The cells of the squamoid nests are often distinct from surrounding acinar cells. They are larger than surrounding cells with abundant eosinophilic to clear cytoplasm and without cytological atypia (Figure 1D). The amount of squamoid nests can vary both within and between tumours.

Pancreatoblastomas typically express trypsin, chymotrypsin, lipase, and BCL10. The granules are periodic acid-Schiff (PAS)-positive and resistant to diastase (PASD)[3,4]. Focal expression of chromogranin A and synaptophysin may be present. Squamoid nests may be positive for EMA, AE1/AE3 (Figure 1E) or CD10 (Figure 1F). In addition, patchy nuclear and cytoplasmic expression of β-catenin may be seen.

The staging of pancreatoblastoma follows the TNM classification of carcinoma of the exocrine pancreas[3].

Loss of heterozygosity on chromosome 11p is the most common molecular alteration in pancreatoblastomas, occurring in 86% of cases. Molecular alterations in the adenomatous polyposis coli (APC)/β-catenin signalling pathway have also been identified in 67% of pancreatoblastomas, including biallelic inactivation of the APC gene and activating mutations of CTNNB1 (β-catenin) gene. Biallelic inactivation of the APC gene has been identified in a patient with pancreatoblastoma arising in the setting of FAP[8]. Interestingly, aberrations in the APC/β-catenin pathway have been implicated in the development of hepatoblastoma, a tumour associated with Beckwith-Wiedemann syndrome[8,34].

Pancreatoblastomas are distinct from the more common pancreatic ductal adenocarcinoma, and it is generally easy to differentiate them on the basis of morphology. The differential diagnosis of pancreatoblastoma includes solid cellular neoplasms of the pancreas such as acinar cell carcinomas, solid pseudopapillary neoplasms, and pancreatic neuroendocrine neoplasms (PanNENs).

There are no established treatment guidelines for pancreatoblastoma. Treatment consists of surgical resection with a variable combination of chemotherapy, radiotherapy, or targeted therapy (Table 1).

Although long-term survival has been observed in some adults, the prognosis of pancreatoblastoma in children may be more favourable than in adults[1,4,13,14]. Poor prognostic factors include the presence of metastases and unresectable disease[3]. Chemotherapy and radiotherapy may have a role in the treatment of recurrent, residual, unresectable and metastatic disease[3,38]. Because of the tendency for recurrence and metastasis, long-term follow-up is advised for these patients[38].

In summary, adult pancreatoblastomas are extremely rare. Although these tumours typically occur in children, pancreatoblastomas should be considered in the differential diagnosis of solid pancreatic tumours in adults. An appreciation of distinctive squamoid nests, predominant acinar differentiation, and expression of trypsin, chymotrypsin, lipase, and BCL10 are important for the accurate diagnosis of pancreatoblastomas. These tumours are aggressive with frequent local invasion, recurrence, and distant metastasis. They must be distinguished from morphological mimics. There is a need for further research to better understand the molecular drivers of pancreatoblastomas, identify druggable molecular targets, and, most importantly, improve patient care.