Although several methods of totally laparoscopic total gastrectomy (TLTG) have been reported. The best anastomosis technique for LTG has not been established.

We performed 151 and 131 surgeries using TLTG with the modified overlap method and OTG for gastric cancer between March 2012 and December 2018. Surgical and oncological outcomes were compared between groups using propensity score matching. In addition, we analyzed the risk factors associated with postoperative complications.

Patients who underwent TLTG were discharged earlier than those who underwent OTG [TLTG (9.62 ± 5.32) vs OTG (13.51 ± 10.67), P < 0.05]. Time to first flatus and soft diet were significantly shorter in TLTG group. The pain scores at all postoperative periods and administration of opioids were significantly lower in the TLTG group than in the OTG group. No significant difference in early, late and esophagojejunostomy (EJ)-related complications or 5-year recurrence free and overall survival between groups. Multivariate analysis demonstrated that body mass index [odds ratio (OR), 1.824; 95% confidence interval (CI): 1.029-3.234, P = 0.040] and American Society of Anaesthesiologists (ASA) score (OR, 3.154; 95%CI: 1.084-9.174, P = 0.035) were independent risk factors of early complications. Additionally, age was associated with ≥ 3 Clavien-Dindo classification and EJ-related complications.

Laparoscopic total gastrectomy (LTG) is becoming increasingly used to treat upper or middle third gastric cancer because it shows earlier recovery and is considered less invasive[1-3]. Of the entire procedure of LTG, esophagojejunal reconstruction is the most crucial process. This is because the failure of esophagojejunostomy (EJ) such as leakage and stricture could induce the patients to suffer[4]. When performing EJ, EJ using linear stapler method is widely adopted due to its simplicity in comparison to the circular stapled method, such as overlap and functional method[5-9]. Nonetheless, the linear stapled method has a fundamental problem that it requires larger space to dissect around the distal esophagus than does the circular stapled method because the linear stapler needs to be inserted in the abdominal hiatus.

Recently, we developed a modified overlap method for totally LTG (TLTG) for overcoming these disadvantages of linear stapled method[10]. This method is performed with an intracorporeal side to side esophagojejunal anastomosis using a 45-mm linear stapler at 45° from the longitudinal direction of the esophagus (Figure 1). This procedure requires less dissection around abdominal esophagus; therefore, it can create a secure esophagojejunal anastomosis with reduced tension as circular stapled method. 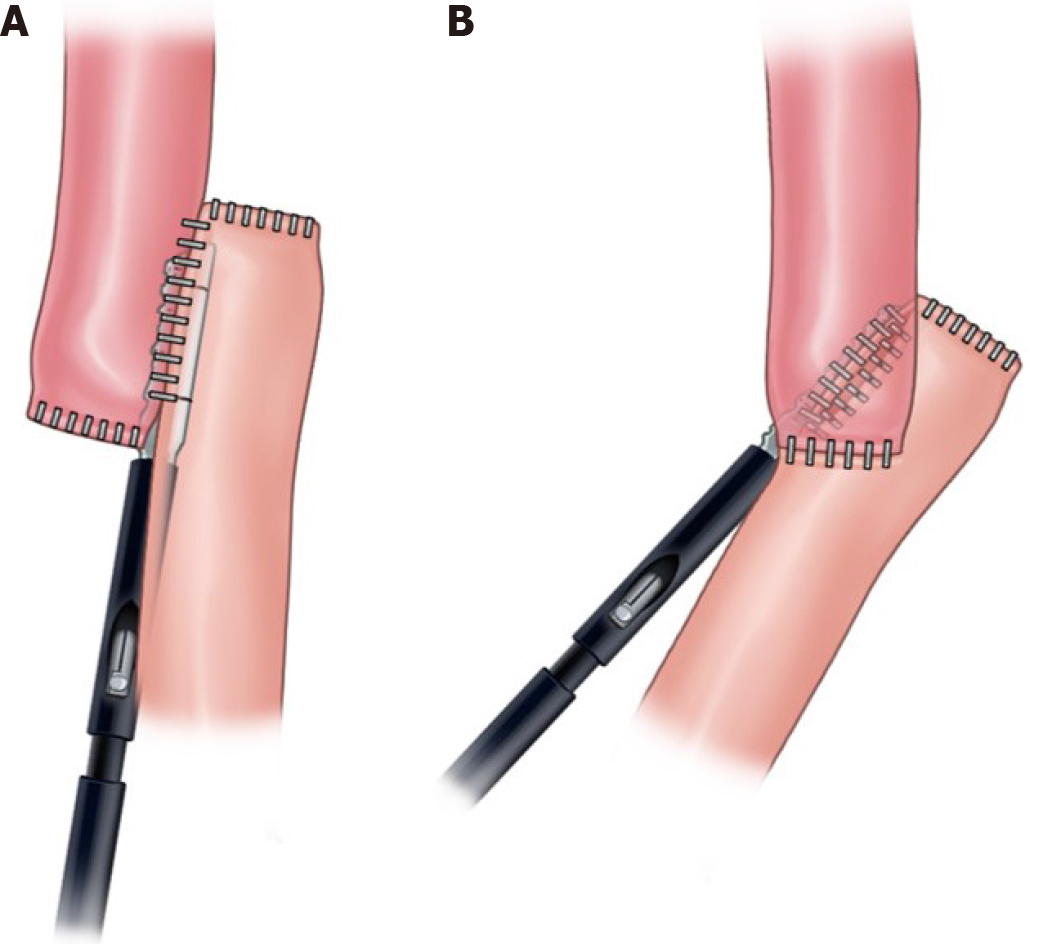 Several studies have investigated the surgical outcomes of the TLTG compared with open total gastrectomy (OTG), including EJ-related complications[11,12]. However, to the best of our knowledge, there are few studies which compared TLTG with the overlap method and OTG with circular stapled method including oncological outcome.

The aim of the present study was to investigate the technical feasibility and oncological outcome of TLTG with the modified overlap method when compared with OTG with circular stapled method in the treatment of upper or middle third gastric cancer.

This study was approved by the institutional review board of the Asan Medical Center. We reviewed the retrospectively collected and analyzed data of 462 patients who underwent curative TLTG (n = 178) and OTG (n = 284) as a treatment for upper or middle third gastric cancer between March 2012 and December 2018 at Asan Medical Center. We excluded all patients who received neoadjuvant chemotherapy, were diagnosed with esophagogastric junction cancer, underwent resection additional organs except for gall bladder, and did not have a gastric cancer diagnosis. Finally, 151 and 131 patients who underwent TLTG and OTG, respectively, were enrolled. All TLTG procedures were performed as TLTG with the modified overlap method. We evaluated TNM (tumor-node-metastasis) stage using the American Joint Committee on Cancer (AJCC), 7th edition[13]. Clinical characteristics and pathologic data were compared between TLTG and OTG groups. Additionally, we evaluated surgical outcomes, including EJ-related complications, and oncologic outcomes, including recurrence free survival (RFS) and overall survival (OS). Early and late complications were defined as events occurring within or after 30 d postoperatively, respectively. EJ complications, including bleeding, leakage and stricture, were diagnosed via upper gastrointestinal series, esophagogastroduodenoscopy, computed tomography, and clinical signs. These complications were reviewed and classified based on the Clavien-Dindo classification system (CDC)[14]. Patients were matched using propensity score matching (PSM) analysis and surgical and oncological outcomes were evaluated.

We performed TLTG with modified overlap method and OTG with circular stapled method, which was similar to our previous studies[3,10]. Both procedures were performed by a single experienced surgeon who conducts approximately 300 cases of gastrectomy annually.

To reduce the impact of treatment selection bias and potential confounding factors in this observational study, we performed rigorous adjustments for significant differences in the baseline characteristics of patients using the logistic regression models with generalized estimating equations (GEE) with a propensity score matched set. When that technique was used, the propensity scores were estimated without considering the outcomes using multiple logistic regression analysis. A full non-parsimonious model was developed that included all the variables shown in Table 1. Model discrimination was assessed using the C statistic and model calibration was evaluated using Hosmer-Lemeshow statistics. Overall, the model was well calibrated (Hosmer-Lemeshow test; P = 0.368) with reasonable discrimination (C statistic = 0.858). We matched the two groups (1:1 ratio) using a ‘greedy nearest-neighbour’ algorithm method. The Matching balance was measured based on the standardized mean differences. A > 10% difference in the absolute value was considered significantly imbalanced. 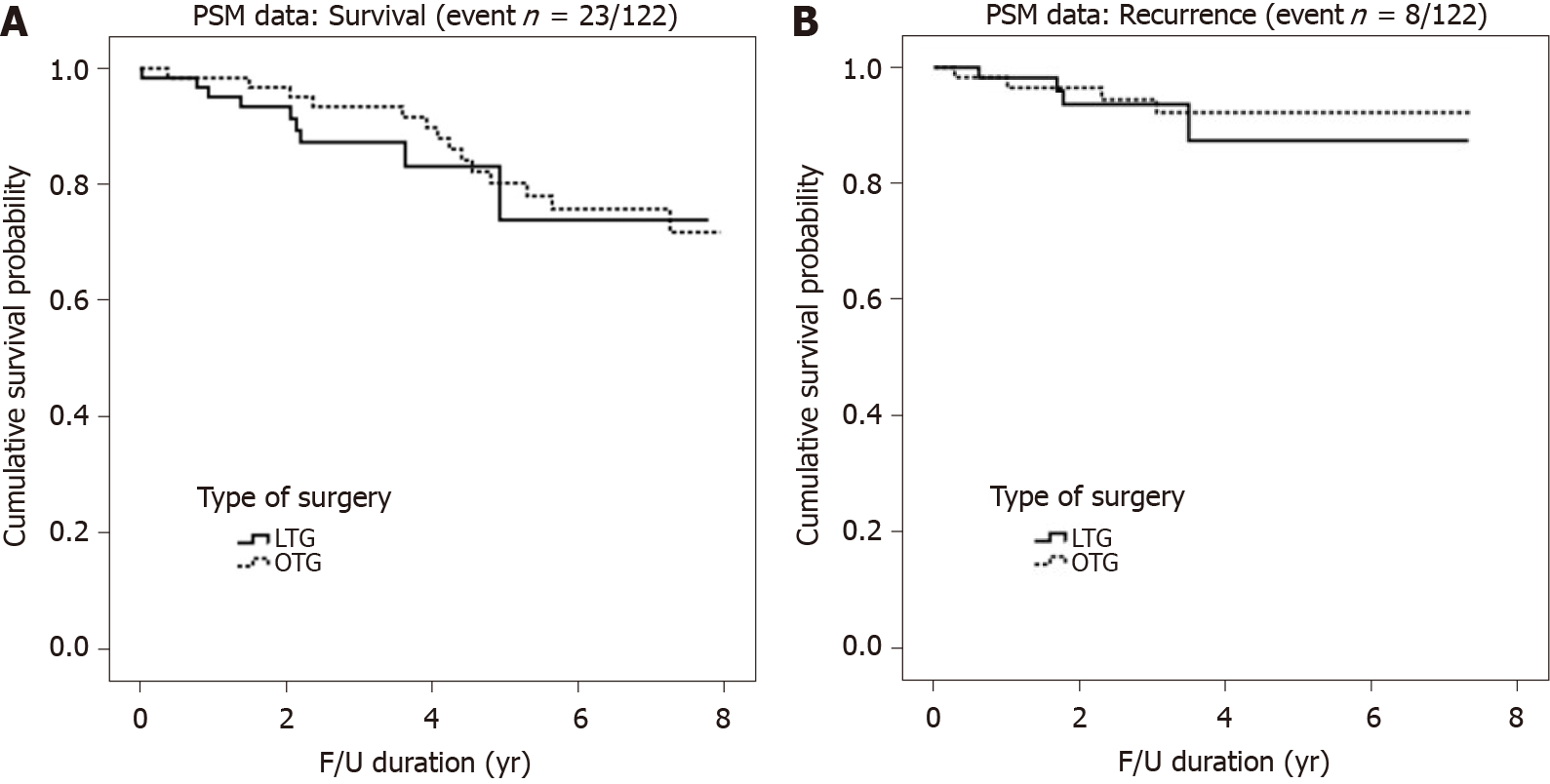 To the best of our knowledge, this is the first study to compare feasibility and oncological outcomes between patients who underwent TLTG with the modified overlap method and OTG. This study demonstrated that TLTG with the modified overlap method is a technically safe procedure based on acceptable postoperative complications, including EJ-related complications.

The overlap method is a widely used EJ reconstruction method in TLTG, it which can lessen the tension in the anastomosis and reduce mesentery division. This secures additional jejunum length for anastomosis[15,16]. This method involves a linear stapler for anastomosis; therefore, the area around the abdominal esophagus requires sufficient dissection. Furthermore, and space in the hiatus and length of the esophagus in which the stapler will be placed should be secured. This may lead to tension in the esophagus after anastomosis and hiatal hernia caused by excessive hiatus dissection. We have devised a novel method to minimize these risks, named the modified overlap method. We use a linear stapler; however, compared with the existing side-to-side anastomosis, less esophageal dissection is required. Further, anastomosis is completed obliquely at 45°; therefore, the resulting anastomosis is similar to when a circular stapler is used because end to side anastomosis is possible. This study proved the TLTG with this modified overlap method showed no significant difference in EJ complications when compared with OTG.

A previous comparative study of LTG and OTG reported similar EJ anastomotic complications; however, a previous large multicenter cohort study in Japan has shown that open surgery is safer for EJ reconstruction[11,12,17]. This indicates that controversy remains regarding the superior method for EJ anastomosis between OTG and LTG. Furthermore, international treatment guidelines, including the Korean gastric cancer treatment and Japanese gastric cancer treatment guidelines, do not yet recognize LTG as a standard treatment[18,19]. Nonetheless, our data indicate that a randomized clinical trial assessing the surgical and oncological outcomes using the modified overlap method should be conducted to confirm its safety and efficacy.

In this study, we overcame operative time and lymphadenectomy issues using the TLTG with the modified overlap method. First, laparoscopic gastrectomy surgery is longer than open gastrectomy[2,20,21]. However, the institution in which this study was conducted is a high-volume center where more than a thousand laparoscopic gastrectomies are performed annually. The lead surgeon in this study performs > 300 gastric cancer operations per year. All surgical team members in this institution are skilled and experienced; therefore, we predicted a reduced operative time while maintaining acceptable surgical and oncological outcomes. However, it may be difficult to apply the results of this study to low-volume centers or inexperienced surgeons.

Second, lymph node dissection is an important procedure in gastric cancer surgery because the oncologic outcome is dependent on a proper lymphadenectomy[22]. The AJCC recommends that ≥ 30 lymph nodes be removed for lymphadenectomy in gastric cancer[23]. In this study, there was no statistically significant difference in the number of retrieved lymph nodes between groups; ≥ 30 lymph nodes were removed in both groups. In addition, this study showed that the 5-year overall and RFS after PSM analysis did not differ between groups.

This study has some limitations. First, it is a retrospective study performed by a single experienced surgeon at a high-volume center. Therefore, our method might not be appropriate for relatively inexperienced surgeons or small-volume institutes. Second, the number of enrolled patients is relatively small; therefore, subgroup analysis, such as distinguishing between early gastric cancer and advanced gastric cancer or grouping by stage, was not possible.

In conclusion, we confirmed that TLTG with the modified overlap method had several advantages over OTG. These included a lower pain score, earlier bowel recovery, and discharge based on acceptable postoperative complications and oncological outcomes.

Although several methods of totally laparoscopic total gastrectomy (TLTG) have been reported, the best anastomosis technique of TLTG has not been conclusively established. Recently, we developed a modified overlap method for TLTG for overcoming these disadvantages of linear stapled method. This procedure requires less dissection around abdominal esophagus; therefore, it can create a secure esophagojejunal anastomosis with reduced tension as circular stapled method.

Whether is a more optimal anastomotic method of esophagojejunostomy in TLTG and open total gastrectomy (OTG) remains unclear. Especially, there was no report about comparing between TLTG with overlap method and OTG.

The aim of this study was to investigate the effectiveness and surgical outcomes including recurrence and survival of TLTG using the modified overlap method compared with OTG using the circular stapled method.

We performed 151 TLTG with modified overlap method and 131 OTG for gastric cancer between March 2012 and December 2018 at Asan Medical Center. We evaluated surgical and oncological outcomes between the two groups using propensity score matching. In addition, we analyzed risk factors associated with postoperative complications for improvement of postoperative management of gastric cancer surgery.

The patients who underwent TLTG were discharged earlier than those who underwent OTG. Time to first flatus and soft diet were significantly shorter in TLTG group. Pain score at all postoperative period and administration of opioid were significantly lower after the TLTG. No statistically significant difference was found between the two groups in terms of early, late and esophagojejunostomy-related complications. Significant differences were observed not with respect to 5-year recurrence free survival and overall survival.

TLTG with modified overlap method have favorable surgical and oncological outcomes compared with OTG. Furthermore, the surgeon should perform total gastrectomy cautiously and delicately especially with the patients with obese, high American Society of Anaesthesiologists score and old age.

Based on our results, we confirmed that the TLTG with modified overlap method has several advantages over OTG. However, this study has certain limitations. It is a retrospective study performed by a single experienced surgeon at a high-volume center, and the number of enrolled patients is relatively small.