To clarify the predictors correlated with the short-term and long-term survival of HCC patients with PVTT who underwent TACE.

The medical records of 181 HCC patients with PVTT who underwent TACE at the Second Affiliated Hospital of Chongqing Medical University from January 2015 to July 2019 were retrospectively analyzed. We explored the short-term and long-term prognostic factors by comparing the preoperative indicators of patients who died and survived within 3 mo and 12 mo after TACE. Multivariate analyses were conducted using logistic regression. The area under the receiver operating characteristic curve (area under curve) was used to evaluate the predictive ability of the factors related to the short-term and long-term prognosis.

The median survival time was 4.8 mo (range: 2.5-8.85 mo). The 3 mo, 6 mo, and 12 mo survival rates were 68.5%, 38.7%, and 15.5%, respectively. In multivariable analysis, total bilirubin, sex, and aspartate aminotransferase (AST) were closely linked to short-term survival. When AST ≥ 87 U/L and total bilirubin ≥ 16.15 µmol/L, the 3-mo survival rate after TACE was reduced significantly (P < 0.05). AST had the best predictive ability, followed by total bilirubin, while sex had the worst predictive ability for short-term survival area under curve: 0.763 (AST) vs 0.707 (total bilirubin) vs 0.554 (sex)]. The long-term survival outcome was significantly better in patients with a single lesion than in those with ≥ three lesions (P = 0.009). Patients with massive block HCC had a worse long-term survival than patients with nodular and diffuse HCC (P = 0.001).

AST, total bilirubin, and sex are independent factors associated with short-term survival. The number of tumors and the gross pathological type of tumor are related to the long-term outcome.

Primary liver cancer is currently one of the most common malignant tumors, and it is among the top five causes of death and morbidity from malignant tumors around the world[1]. Hepatocellular carcinoma (HCC) is the most common pathological type, accounting for approximately 90% of all primary liver cancers. Because of its biological and anatomical characteristics, HCC easily invades the portal vein during the progression of liver cancer and forms portal vein tumor thrombosis (PVTT). Some reports have proposed that the incidence of HCC with PVTT is approximately 44%-62.2%[2]. HCC accompanied by PVTT is closely associated with a poor prognosis and is likely to lead to intrahepatic metastasis, liver function damage, portal hypertension, upper gastrointestinal bleeding, and other complications. The median overall survival time of HCC patients with PVTT who receive no treatment is only 2.7 mo[3].

There is still controversy about the treatment of HCC with PVTT in Eastern and Western countries. Previous studies have suggested that HCC with PVTT should be classified as stage C of Barcelona Clinic Liver Cancer and is no longer suitable for surgical treatment[4]. Some researchers have mentioned that compared with conservative treatment, TACE is a safe and effective therapy for selected HCC patients with PVTT[5-7]. However, some patients die in the short term after TACE, and patients who have expected postoperative survival times of less than 3 mo may not be suitable for TACE.

We enrolled a total of 181 HCC patients with PVTT who received TACE in the Second Affiliated Hospital of Chongqing Medical University from January 2015 to July 2019. The inclusion criteria were as follows: (1) Histopathology confirmed as HCC or clinically diagnosed as HCC; (2) Abdominal color Doppler ultrasound, digital subtraction angiography, contrast-enhanced computerized tomography, or magnetic resonance imaging showed signs of PVTT; (3) No treatment, such as surgery, radiotherapy, chemotherapy, liver transplantation, targeted, or biological therapy, was administered before and after TACE; (4) Age ≥ 18 years; and (5) Complete clinical data were available. Patients with other malignancies or severe heart and lung diseases were eliminated. The follow-up endpoint was July 2020 or the date of death, whichever came first. The follow-up was conducted by telephoning or outpatient visits. During our follow-up, 14 patients received other treatments, such as targeted therapy and High Intensity Focused Ultrasound, and one patient was diagnosed with and treated for a hematologic malignancy. Twenty-six patients were lost to follow-up. The above patients were not included in the study. The study complied with the ethical guidelines of the Declaration of Helsinki in 1964 and passed the review of the Review Committee of the Second Affiliated Hospital of Chongqing Medical University.

The puncture of the artery used Seldinger technology. The right femoral artery was often selected. The catheter was delivered to the celiac trunk and the common hepatic artery, and arteriography was performed to identify the tumor's nutrient artery. The catheter was sent into the tumor-feeding artery and injected with chemotherapy drugs. Chemoembolization drugs commonly included lipiodol, polyvinyl alcohol particles, cisplatin, bleomycin, gelatin sponge particles, etc.

The mean ± SD or median were used to express the continuous variables. Categorical variables are presented as n (%). Two groups of data were compared using independent-samples t tests, Mann-Whitney U tests, χ2 tests or Fisher's exact tests. The statistically significant indicators in the univariate analysis (P < 0.05) were selected in multivariate analysis in the study. The independent predictors for survival were determined by logistic regression analysis. The predictive ability of the independent predictors for short-term survival was assessed by the AUC. The cutoff value was calculated by the receiver operating characteristic (ROC) curves. The Kaplan-Meier method was used to plot the survival curves. SPSS 25.0 software (Armonk, NY, United States) was used to perform all statistical analyses. When P < 0.05, the statistical results were considered significant. 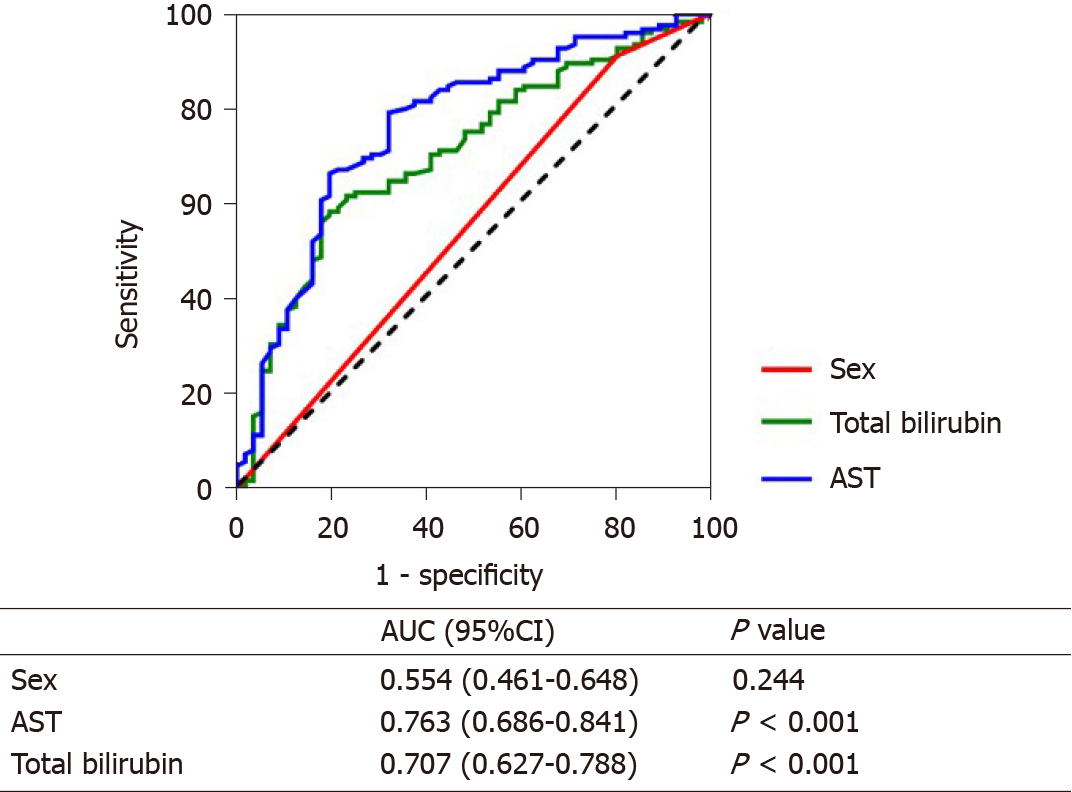 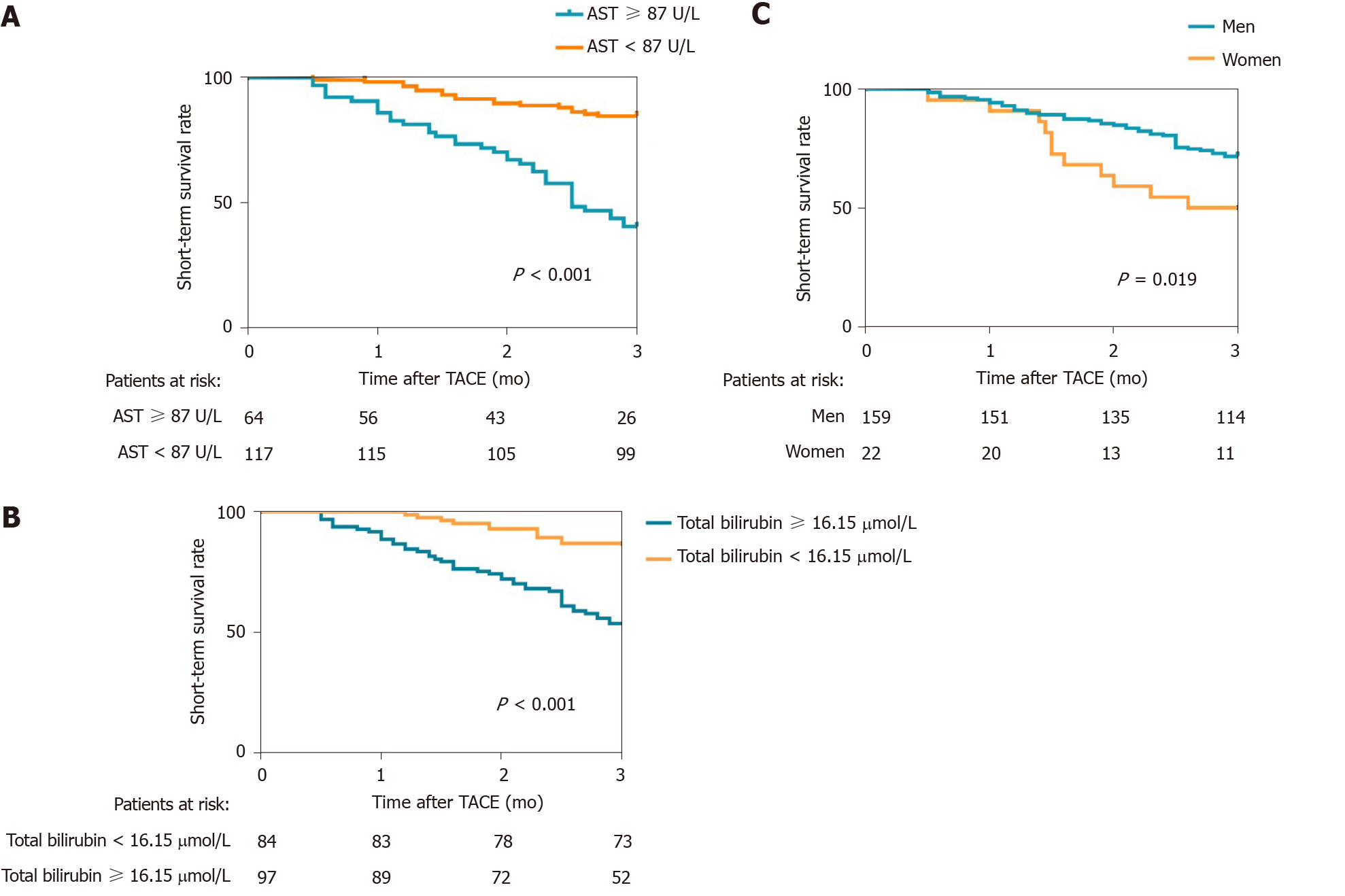 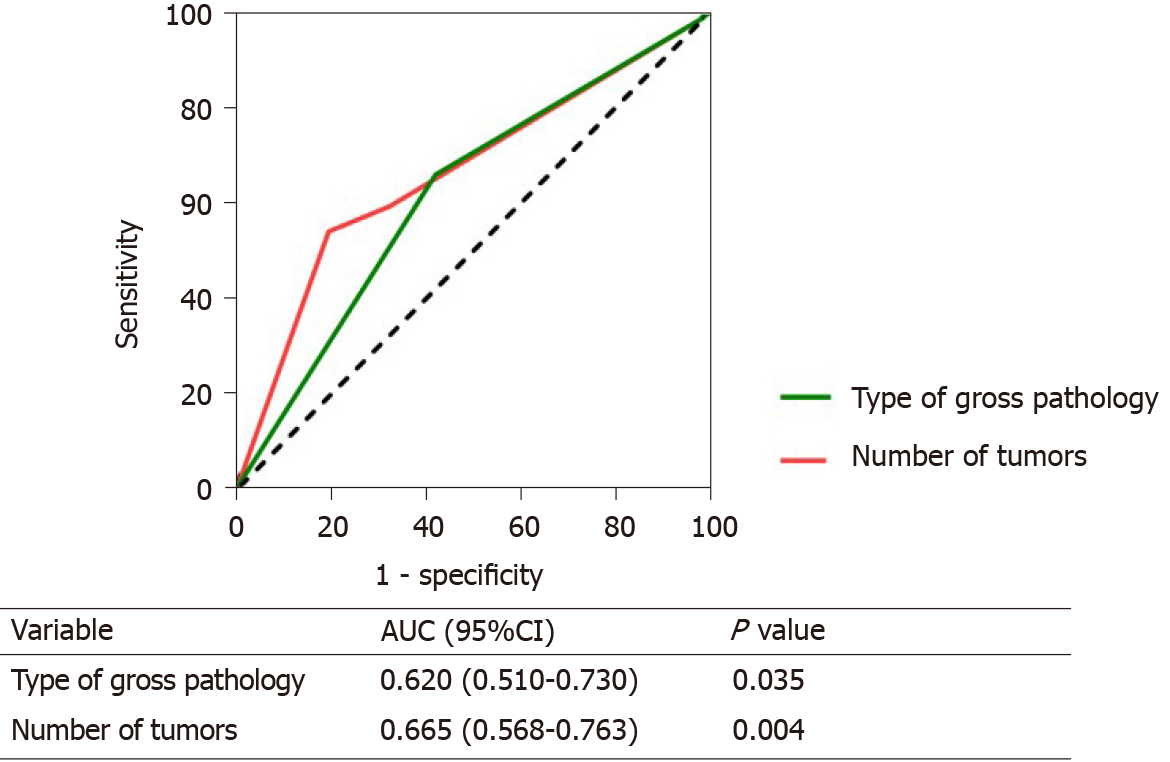 Figure 3 Comparisons of the area under the receiver operating characteristics curves for long-term survival between pathology and number of tumors. AUC: Area under curve; CI: Confidence interval.
DISCUSSION

In this paper, we found that sex, AST, and total bilirubin were independent influential factors for short-term survival. The incidence and mortality of HCC in men were higher than in women[11]. This was different from the conclusion in our article. The main reason was the imbalance of gender ratio in the article. The AUC of sex was not high (AUC: 0.554, 95%CI: 0.461-0.648, P > 0.05), which showed that although sex was an independent factor influencing short-term prognosis, its predictability was not well.

Total bilirubin was a biochemical indicator of liver metabolic function. Carr et al[12] believed that high levels of serum bilirubin can increase the risk of death in HCC patients with PVTT. In our study, it was also found that elevated bilirubin levels were associated with poor short-term survival in HCC patients with PVTT who underwent TACE. According to the AUC of bilirubin, we thought that this indicator had good predictive power. When total bilirubin was greater than 16.15 µmol/L, the patients’ mortality within 3 mo after TACE was significantly increased. This suggested that for patients with preoperative total bilirubin greater than 16.15 µmol/L, the treatment of lowering the bilirubin level may be beneficial in reducing the short-term postoperative mortality.

In addition, most patients had a background of viral hepatitis in the study, which was different from some areas. This may limit the application of our findings in regions where the cause of liver cancer was non-viral hepatitis. Therefore, research in other countries or regions may be needed to make up for the shortcoming of our study. Because patients with viral hepatitis accounted for the majority, model for end-stage liver disease scores in our study were higher than those of patients whose cause of liver cancer was alcohol or cholestasis.

The following limitations existed in this study. First, this study was a single-center, retrospective study, and it was difficult to avoid selection bias. Second, perhaps because of the small sample size, AUC value was not high, but the AUC value was still statistically significant. The larger and multicenter studies are needed to validate further the results in the future.

The main aim of this study was to clarify the predictors correlated with the short-term and long-term survival of HCC patients with PVTT who underwent TACE.

We can provide some guidance to clinicians for selecting suitable patients for TACE by analyzing preoperative indicators.

A total of 181 HCC patients with PVTT who underwent TACE were enrolled in this retrospective study. We explored the short-term and long-term prognostic factors by comparing the preoperative indicators of patients who died and survived within 3 mo and 12 mo after TACE. Multivariate analyses were conducted using logistic regression. The area under the receiver operating characteristic curve was used to evaluate the predictive ability of the factors related to the short-term and long-term prognosis.

Larger and multicenter studies are needed to validate further the results in the future.

We would like to thank Miss Huang F for her help in the preparation of this manuscript.