Constipation is one of the most important nonmotor symptoms in Parkinson's disease (PD) patients, and constipation of different severities is closely related to the pathogenesis of PD. PD with constipation (PDC) is considered a unique type of constipation, but its mechanism of formation and factors affecting its severity have been less reported. Understanding the gastrointestinal motility characteristics and constipation classification of PDC patients is essential to guide the treatment of PDC. In this study, the colonic transit test and high-resolution anorectal manometry were used to identify the intestinal motility of PDC to provide a basis for the treatment of PDC.

Parkinson's disease (PD) is a common neurodegenerative disease, with a prevalence of 1% in the elderly and about 10% in patients before the age of 50[1]. The pathological signs of PD are abnormal deposition of α-synuclein and progressive degeneration and loss of dopamine neurons in the substantia nigra compacta[2]. The main clinical manifestations are resting tremor, myotonia, bradykinesia, and abnormal postural gait. Over the past 15 years, non-motor symptoms (NMS), mainly autonomic dysfunction, have attracted much attention in patients with PD, including gastrointestinal dysfunction (dysphagia, delayed gastric emptying, and constipation), hypo olfaction, and sleep disorders, which are caused by neuronal loss in other areas of the brain[3]. Among them, constipation is one of the most common NMS in patients with PD. Studies have shown that 20%-89% of PD patients experience constipation, and the incidence gradually increases with the progression of the disease[4]. Compared with non-PD subjects, the frequency of constipation in PD patients increased by 2 to 4 times[5], and the degree of constipation was positively correlated with PD. Autopsy of constipated patients revealed a significant decrease in neuronal density in the substantia nigra, which also provided pathological evidence that constipation increased the risk of PD. Constipation can occur more than 10 years earlier than motor symptoms, making it one of the earliest indicators in the process of PD formation; recently, constipation has been included in the predecessor diagnostic criteria for PD[6]. PD with constipation (PDC) is considered a unique type of constipation, but its mechanism of formation and factors affecting its severity have been less reported, and the conclusions are not uniform[7]. It is likely that there is a causal relationship between PD and constipation, such that they exacerbate one another and form a vicious cycle. To stop constipation, this cycle may be terminated to prevent or delay the occurrence of PD. However, PDC treatment is very difficult and prone to drug resistance[8,9]. Compared with functional constipation (FC), it is not clear whether the clinical characteristics and influencing factors of PDC are unique. Understanding the gastrointestinal motility characteristics and constipation classification of PDC patients is essential to guide the treatment of PDC.

A total of 20 patients with PDC and 20 patients with FC who visited Xuanwu Hospital of Capital Medical University between August 6, 2018 and December 2, 2019 were recruited as test and control groups, respectively. All patients underwent a colonic transit test (CTT) and high-resolution anorectal manometry (HRAM) to compare the differences in colonic transit time, rectal anal canal pressure, and constipation classification between the two groups. Inclusion criteria were: (1) Age older than 18 years; (2) Fulfilled the diagnostic criteria for PD and Rome IV functional constipation; and (3) Symptom onset of more than 6 mo. Exclusion criteria were: (1) Presence of chronic diseases such as hypertension, diabetes mellitus, and coronary heart disease; (2) Organic diseases of the colon; (3) Diseases that may affect gastrointestinal motility function, such as thyroid disease, renal dysfunction, connective tissue disease, mental disorders, etc.; (4) History of abdominal surgery; and (5) Taking drugs that affect gastrointestinal motility in the last 2 wk.

CTT: Radiopaque markers (Sitzmarks, Konsyl Pharmaceuticals, United States) were used for detection. Each capsule contained 24 radiopaque markers, measuring 1 mm × 4.5 mm, of three different shapes: The O-Ring shape, the Double D shape, and the Tri-chamber shape. On day 1, subjects took one capsule containing the Double D shape under supervision, and swallowed the second capsule containing the O-Ring shape and the third capsule containing the Tri-chamber shape after 24 h and 48 h, respectively. After 72 h, a kidney, ureter, and bladder examination of the abdomen was performed. If the transverse colon could not be fully displayed, an X-ray of the upper abdomen was taken. The transit time of the whole colon and segmented colon was then calculated according to Metcalfe's method[10] (Figure 1). 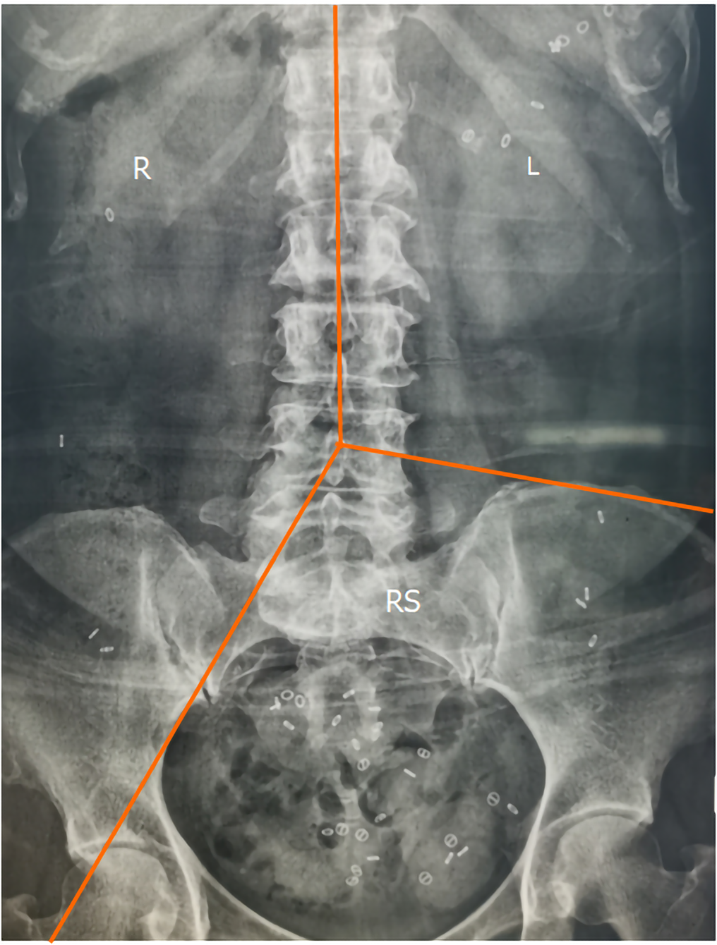 IBM SPSS 22.0 was used to analyze all data. Continuous variables were analyzed using a t-test (normally distributed) and expressed as mean ± SD. Data with a non-normal distribution were expressed as percentiles, and the Kruskal-Wallis test was used to compare groups. Categorical data were calculated using the Chi-square test and expressed as a ratio (%). A P < 0.05 was considered statistically significant.

Twenty patients with PDC and 20 patients with FC were included in the study, and there were no statistically significant differences in sex, age, body mass index (BMI), or duration of constipation between the two groups. The chief complaints of constipation across the two groups were compared, and it was found that more patients in the PDC group exhibited difficulty in defecating than in the FC group, and the difference was statistically significant (Table 1).

Comparison of colonic transit time between the two groups

Comparison of constipation classification between the two groups

Constipation is one of the most important nonmotor symptoms in PD patients, and can occur several years or even decades before the onset of exercise symptoms[11,12]. Taiwanese scholars[5] conducted a follow-up survey of the relationship between the severity of constipation and the risk of PD over 5 years. The study showed that the incidence rate of PD was 1.57/100000 for those without constipation. The incidence rate of PD in patients with mild, moderate, and severe constipation increased 5 years later, to 4.04/100000, 5.28/100000, 12.67/100 000, and 12.67/100000, respectively. Therefore, constipation of different severities is closely related to the pathogenesis of PD. Although constipation may be the first symptom of PD, the incidence rate of constipation is high and is influenced by many factors. It is not specific for predicting PD[13]. Thus, this study compared PDC and FC and analyzed the constipation symptoms of the two groups of patients. At the same time, the colonic transit test and HRAM were used to classify constipation and detect the corresponding indicators, in order to find more sensitive and specific indicators to predict which constipation patients will eventually develop PD and to identify the gastrointestinal motility of PDC. It is expected to provide a basis for the treatment of PDC.

Our results showed that the LCTT, RSCTT, and TCTT were significantly prolonged in PDC patients, and the distribution of colonic transmission time in each segment of PDC patients was not uniform, especially in the left semicolon and rectum sigmoid colon, which was consistent with previous studies[18-20]. However, to our knowledge, no study has compared the segmental colon transmission time between PDC and FC patients. Our results suggest that the RSCTT of PDC patients was significantly longer than that of FC patients while the RCTT was significantly shorter than that of FC patients; this revealed the similarities and differences in the mechanism of slow colon transmission between patients with PDC and those with FC. The common mechanism may be explained as follows: (1) Compared with healthy individuals, vasoactive intestinal peptide (VIP) and VIP receptors in the colon mucosa of PDC and FC patients were downregulated[20]. VIP is a non-adrenergic non-cholinergic neuroinhibitory neurotransmitter, and its reduction could increase colon segment peristalsis, weakening the effective promotion of movement. At the same time, through abnormal colon secretion, VIP could reduce the fecal water content and lead to stool sclerosis, thus prolonging colon transmission time; and (2) ENS degeneration, a decrease in the number of intermuscular plexuses of the colonic wall, and the formation of ganglion cell vacuoles may all cause a decrease in the peristaltic function of the colon. The differences between PDC patients and FC patients are as follows: (1) PD leads to the loss of dopaminergic neurons between intestinal muscles, which may lead to decreased colonic transport function[21]. The ENS is rich in cholinergic neurons, including intestinal intermuscular motor neurons, primary transmission neurons, intermediate neurons, and other neurons projecting to the prevertebral sympathetic ganglion. Dopamine is a reactant of tyrosine hydroxylase in 4%-11% of enteric muscle neurons. Therefore, dopamine plays an important role in regulating gastrointestinal motility. Moreover, the innervation of the digestive tract gradually decreases from proximal to distal, and the motor function reduction caused by the loss of dopaminergic neurons is more serious in the distal colon segment[22]; and (2) PDC patients have more abnormal rectal-anal manometry results than FC patients. Some researchers believe that PD patients may have an independent "pelvic floor cooperative motion disorder" which is an element of extrapyramidal disease and a sequelae of neurodegeneration. These are also the reasons why the RSCTT of those with PDC was significantly longer than that of FC patients in this study.

In this study, mixed constipation was dominant in both PDC patients and FC patients, suggesting that both groups of patients had severe functional dyspraxia in the colon and rectum. There was no statistical difference between the two groups. According to the results of HRAM, the rectal sensorimotor dysfunction in patients with PDC was mainly caused by insufficient bowel movement impetus, which may in turn be caused by autonomic neuropathy innervating the rectum. A small number of patients with pelvic floor muscle synergy disorder may also have pelvic floor muscle dystonia caused by PD.

This study has several limitations. The overall sample size of this study was small. In addition, a sample of healthy individuals were not included in the study. Increasing the sample size of patients with PD and including healthy subjects will help us to better understand the pathophysiological mechanism of PDC.

Parkinson's disease (PD) is a common neurodegenerative disease characterized clinically by typical motor symptoms such as tremor, bradykinesia and myotonia and non motor symptoms such as constipation, depression and dysmetria. Constipation is one of the most common clinical manifestations of PD patients. Investigations have shown that the incidence of constipation among PD patients is up to 88%, and constipation is regarded as one of the independent risk factors for PD. PD constipation (PDC) is considered a unique type of constipation that is clinically inadequately treated, severely affecting patient quality of life. Current studies on the characteristics of intestinal motility in patients with Parkinson's disease with constipation are less frequently reported, and the control groups are mostly healthy subjects, and the conclusions are not uniform.

It is likely that there is a causal relationship between PD and constipation, such that they exacerbate one another and form a vicious cycle. However, PDC treatment is very difficult and prone to drug resistance. Compared with functional constipation, it is not clear whether the clinical characteristics and influencing factors of PDC are unique. Understanding the gastrointestinal motility characteristics and constipation classification of PDC patients is essential to guide the treatment of PDC.

To identify the gastrointestinal motility of PDC and provide a basis for its treatment. Moreover, to find more sensitive and specific indicators to predict which constipation patients will eventually develop PD.

This study can be helpful for further studies of the mechanism of PDC and FC and for early diagnosis and treatment of patients with PD.