DEFINITION OF KYOTO CLASSIFICATION OF GASTRITIS

Thanks to advances in endoscopic technology, it is now possible to observe the gastric mucosa in minute detail. Today, endoscopy is used in the diagnosis of gastritis to determine the presence/absence of H. pylori infection and evaluate the risks of gastric cancer. The Kyoto classification of endoscopic findings was advocated when the 85th Congress of the Japan Gastroenterological Endoscopy Society was held in Kyoto in 2013. The purpose of the Kyoto classification was to evaluate the gastric mucosa, as this presents a potential risk of developing gastric cancer[21,22]. In this classification, 19 endoscopic findings related to gastritis, including atrophy, intestinal metaplasia, enlarged folds (tortuous folds), nodularity, diffuse redness, regular arrangement of collecting venules (RAC), map-like redness, foveolar-hyperplastic polyp, xanthoma, mucosal swelling, patchy redness, depressed erosion, sticky mucus, hematin, red streak, spotty redness, multiple white and flat elevated lesions, fundic gland polyp, and raised erosion, are characterized. Among them, atrophy, intestinal metaplasia, enlarged folds, and nodularity, which may be related to gastric cancer risk, and diffuse redness with or without RAC, which is related to H. pylori infection status, are accounted for in the Kyoto classification score (Table 1)[22]. 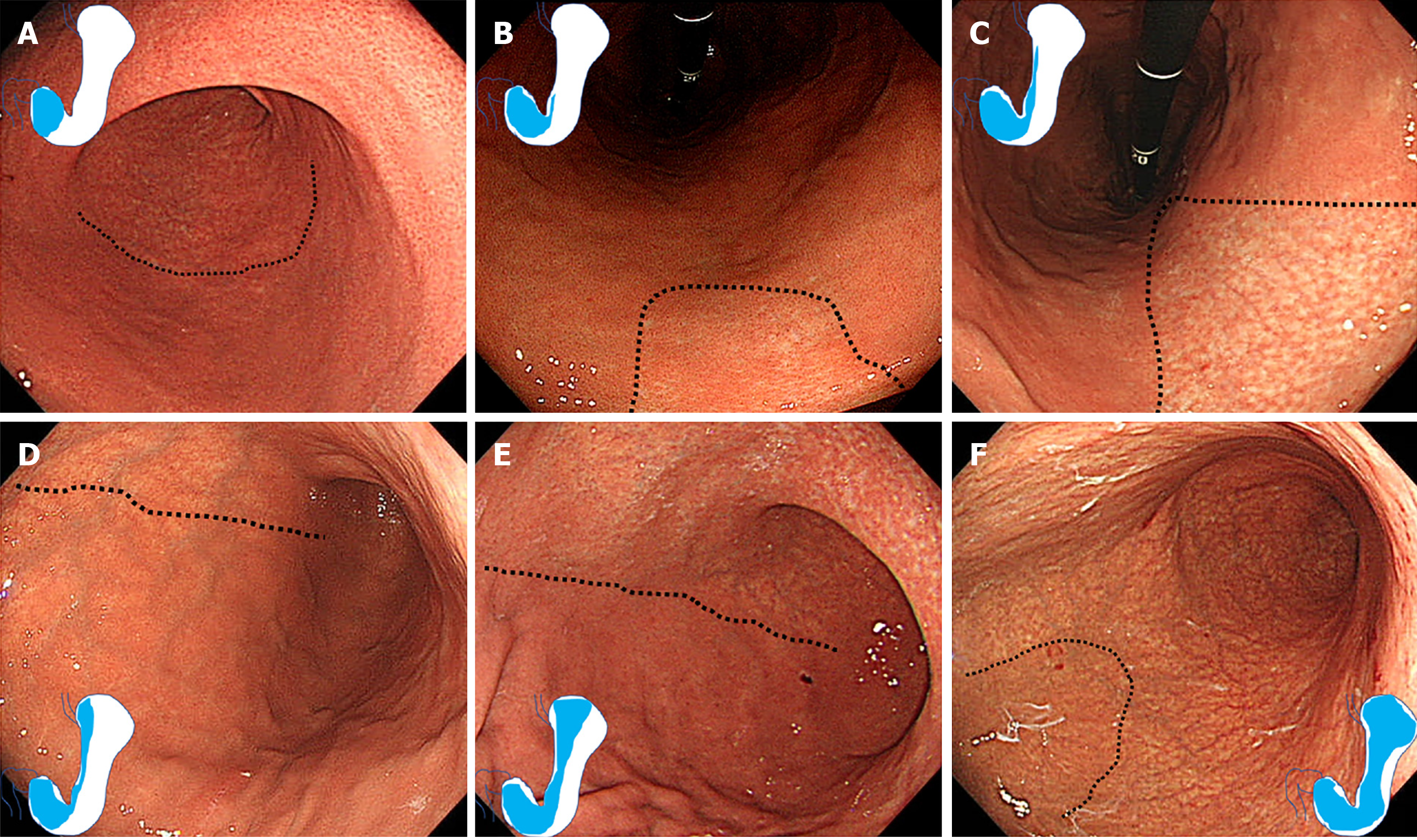 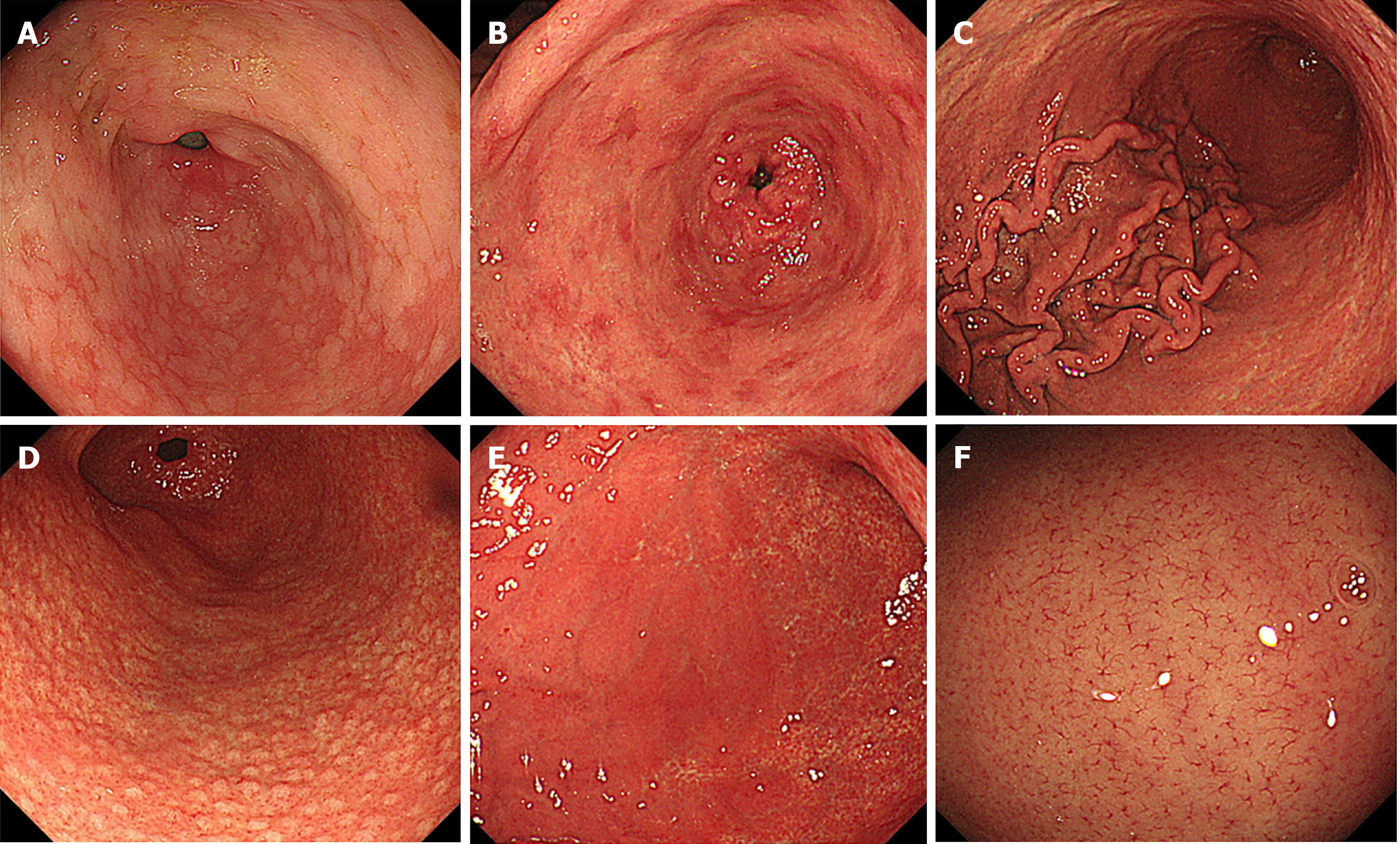 Map-like redness (synonymous with mottled patchy erythema) is defined as multiple flat or slightly depressed erythematous lesions that have various shapes, sizes, and red densities (Figure 2B)[6,43]. When using biopsy specimens of map-like redness, intestinal metaplasia is frequently observed (87.3%)[43]. The mechanism of the appearance of map-like redness is thought to be strengthening of the contrast between non-atrophic mucosa and atrophic mucosa after diffuse redness has disappeared following successful eradication[21]. Map-like redness is not always found following eradication. However, when it is observed, there is virtually no doubt that it is indicative of post-eradication gastric mucosa[22].

An enlarged fold is defined as a fold with a width of 5 mm or more that is not flattened or is only partially flattened by insufflation of the stomach (Figure 2C). Rugal hyperplasia is a synonym for enlarged folds.

In the Kyoto classification score, the absence and presence of enlarged folds was scored as Enlarged folds score 0 and 1, respectively.

In the Kyoto classification score, the absence and presence of nodularity was scored as Nodularity score 0 and 1, respectively.

Diffuse redness refers to uniform redness with continuous expansion observed in non-atrophic mucosa mainly in the corpus (Figure 2E) and is typical of endoscopic superficial gastritis[22,24]. Congestion and dilation of the subepithelial capillary network in the gastric mucosa with inflammatory change of the mucosal surface color to red[50]. Since the assessment of the severity of diffuse redness is affected by the setting of the endoscope and monitor, objective assessment may be difficult.

On the other hand, RAC is a condition in which the collecting venules are arranged in the corpus. From a distance, it appears like numerous dots. From up close, it has the appearance of a regular pattern of starfish-like shapes (Figure 2F).

The Kyoto classification score for gastritis is based on the sum of scores of the five endoscopic findings and ranges from 0 to 8 (Table 1). A high score is believed to reflect increased risk of H. pylori infection and gastric cancer. In a study that evaluated the usefulness and convenience of the Kyoto classification, a mini-lecture improved the accuracy of endoscopic diagnosis[51].

Diagnosis of H. pylori infection based on Kyoto classification score

RAC was reported to be negatively associated with gastric cancer (odds ratio: 0.4)[75].

A Kyoto classification score ≥ 4 might indicate gastric cancer risk. Such cases need careful follow-up. However, research related to the Kyoto score is still scarce and further study is needed.