The commonest sites of extrahepatic metastases from hepatocellular carcinoma (HCC) are the lungs, bones, adrenal glands, and regional lymph nodes. Hematogenous metastasis to the gastrointestinal (GI) tract is a rare condition in patients with HCC, and the prognosis is usually poor. We report, herein, an extremely rare case of a patient with intussusception due to hematogenous metastasis of HCC to the ileum and his long-term survival with multidisciplinary therapy.

The patient was a 71-year-old man with a history of chronic hepatitis B, who had undergone three surgeries for HCC. He was treated with sorafenib for peritoneal metastases of HCC. He was admitted to our hospital with chief complaints of abdominal pain and vomiting. Abdominal contrast-enhanced computed tomography imaging revealed a small intestinal tumor, presenting with intussusception and small bowel obstruction. Conservative treatment was started, but due to repeated exacerbation of symptoms, surgery was planned on the 28th d of hospitalization. Partial ileal resection without reducing the intussusception and end-to-end anastomosis was performed. On histological examination, tumor cells were not observed on the serosal surface, but intravascular invasion of tumor cells was seen. Immunohistochemistry was positive for immunohistochemical markers, and a diagnosis of hematogenous metastasis of HCC to the ileum was made. He remains alive 82 mo after the first surgery.

Prognosis of HCC patients with GI tract metastasis is usually poor, but in some cases, multidisciplinary therapy may prolong survival.

Hepatocellular carcinoma (HCC) is a highly prevalent disease and accounts for 800000 deaths per year globally[1]. Despite the development of novel treatment modalities and newer surgical instruments, the long-term outcomes of HCC are not satisfactory because of high rates of recurrence and metastasis. Intrahepatic metastasis is the most common recurrence pattern of HCC, accounting for approximately 85%-90% of cases[2,3]. Extrahepatic metastases have been reported in 13%-64% of HCC patients, with the lungs, bones, adrenal glands, and regional lymph nodes as the commonest sites of metastases[4-6]. Metastasis of HCC to the gastrointestinal (GI) tract is infrequent, and the distant hematogenous metastasis of HCC to the small intestine is extremely unusual. We report, herein, a case of intussusception due to hematogenous metastasis of HCC to the ileum.

A 71-year-old man was admitted to our hospital with chief complaints of abdominal pain and vomiting.

A 71-year-old man was on treatment for chronic hepatitis B for 22 years when he was diagnosed with HCC. He was noted to have tumor nodules of size 20 mm in diameter, located in segment 8, on a follow-up abdominal computed tomography (CT) (Figure 1) and had undergone partial liver resection 7 years previously. Based on the 8th Union for International Cancer Control classification of HCC, the tumor was classified as pT1N0M0 stage 1. Seven months after the first surgery, abdominal CT revealed recurrent HCC with nodules 10 mm in diameter, in segment 6 of the liver (Figure 2A). When laparotomy was performed, a peritoneal mass was found that was not apparent preoperatively; therefore, partial liver resection and peritoneal tumor resection were performed (Figure 2B and C). The peritoneal tumor with peritoneal metastasis of HCC was diagnosed based on histopathological findings. Fourteen months after the first surgery, abdominal CT revealed a tumor nodule 32 mm in diameter in the pelvis, which was diagnosed as a peritoneal recurrence of HCC (Figure 3A). We determined that the recurrent tumor was solitary and decided to perform tumor resection. However, many small peritoneal nodules were found at the time of laparotomy, and radical resection was impossible (Figure 3B). Subsequently, the patient was followed up by the department of gastroenterology of our hospital, and 16 mo after the initial resection of HCC, administration of sorafenib of 400 mg/d was started. Since he developed a grade 2 hand-foot syndrome, the dosage was reduced to 200 mg/d. The administration was continued for 54 mo without any other major adverse events, and the disease was well controlled. Seventy months after the first surgery, he was admitted to our hospital with chief complaints of abdominal pain and vomiting. 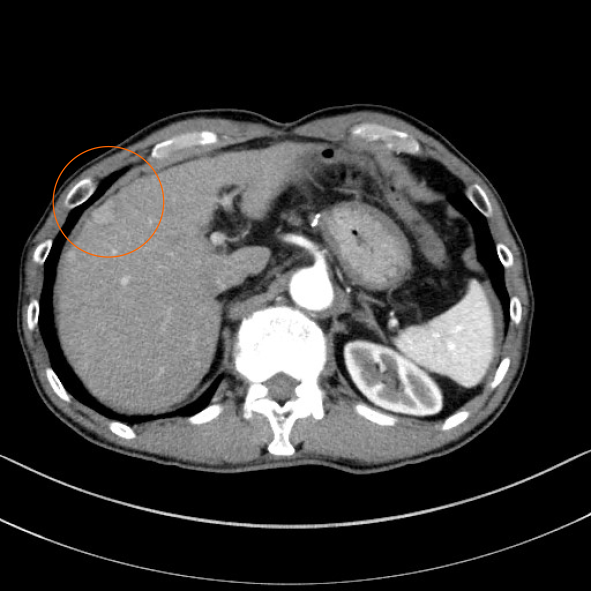 The patient’s history was significant for extensive gastrectomy for duodenal ulcer at the age of 22 years. In addition, he had a history of hypertension since the age of 65, for which he was on treatment with amlodipine besilate (10 mg/d) and azilsartan (20 mg/d).

The patient’s social history consisted of a 40-pack year history and an alcohol intake of 350 mL beer per day. He had discontinued smoking and drinking alcohol 10 years previously. There was no history of cancer or liver disease in his family.

The height and weight of the patient at admission were 172 cm and 52 kg, respectively. There were no abnormalities in the vital signs. The abdomen was soft and slightly swollen. Tenderness was noted in the right lower abdomen.

No abnormal findings were found other than a high C-reactive protein level (4.95 mg/dL) in blood biochemical tests. Liver function tests revealed a class A Child-Pugh score. 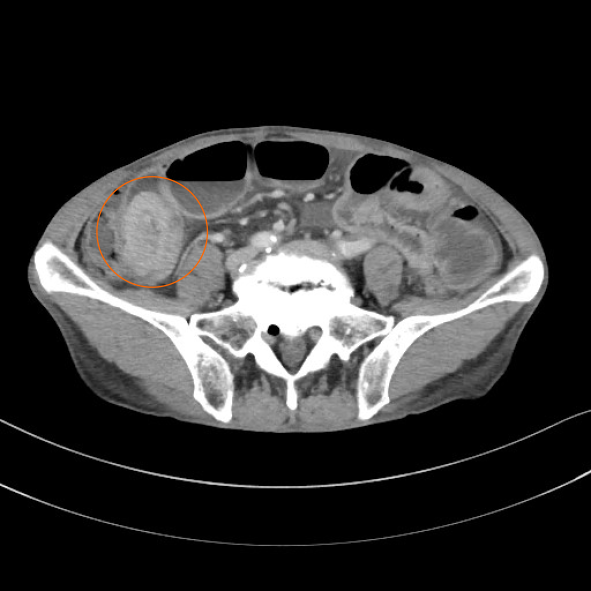 On the basis of these findings, the diagnosis was a small intestinal tumor (primary or metastasis), which had caused the intussusception and small bowel obstruction.

Initially, conservative treatment was initiated because of the peritoneal dissemination of HCC. X-ray examination after contrast infusion through the ileus tube showed no tumor or stenosis in the small intestine other than that at the intussusception site. The patient had fluctuating symptoms, and surgery was planned on the 28th d of hospitalization. During surgery, the intussusception site was found 130 cm distal to the ligament of Treitz. We performed partial ileal resection without reduction of the intussusception, followed by end-to-end anastomosis (Figure 5A). The resected specimen showed a polypoid tumor of size 50 mm protruding into the lumen (Figure 5B).

Figure 5 Intraoperative findings and the resected specimen. A: The intussusception site was found 130 cm distal to the ligament of Treitz; B: The resected specimen showed a polypoid tumor 50 mm in diameter protruding into the lumen.
OUTCOME AND FOLLOW-UP

The postoperative period was uneventful, and the patient was discharged on the 18th postoperative day. The histological examination revealed tumor cells with a cytoplasm rich in eosinophilic granules, enlarged nuclei, and distinct nucleoli that showed dense proliferation in the lesion (Figure 6A). No tumor cells were observed on the serosal surface, but intravascular invasion of tumor cells was observed (Figure 6B). Immunohistochemistry was positive for alpha-fetoprotein (AFP), Hep Par1, and Glypican3[7], and a diagnosis of hematogenous metastasis of HCC to the ileum was made (Figure 6C-E). Since right adrenal metastasis was found on a follow-up abdominal CT 78 mo after the first surgery, administration of Lenvatinib of 8 mg/d was started. The patient continues to survive 82 mo after the initial surgery without any major adverse events of Lenvatinib. 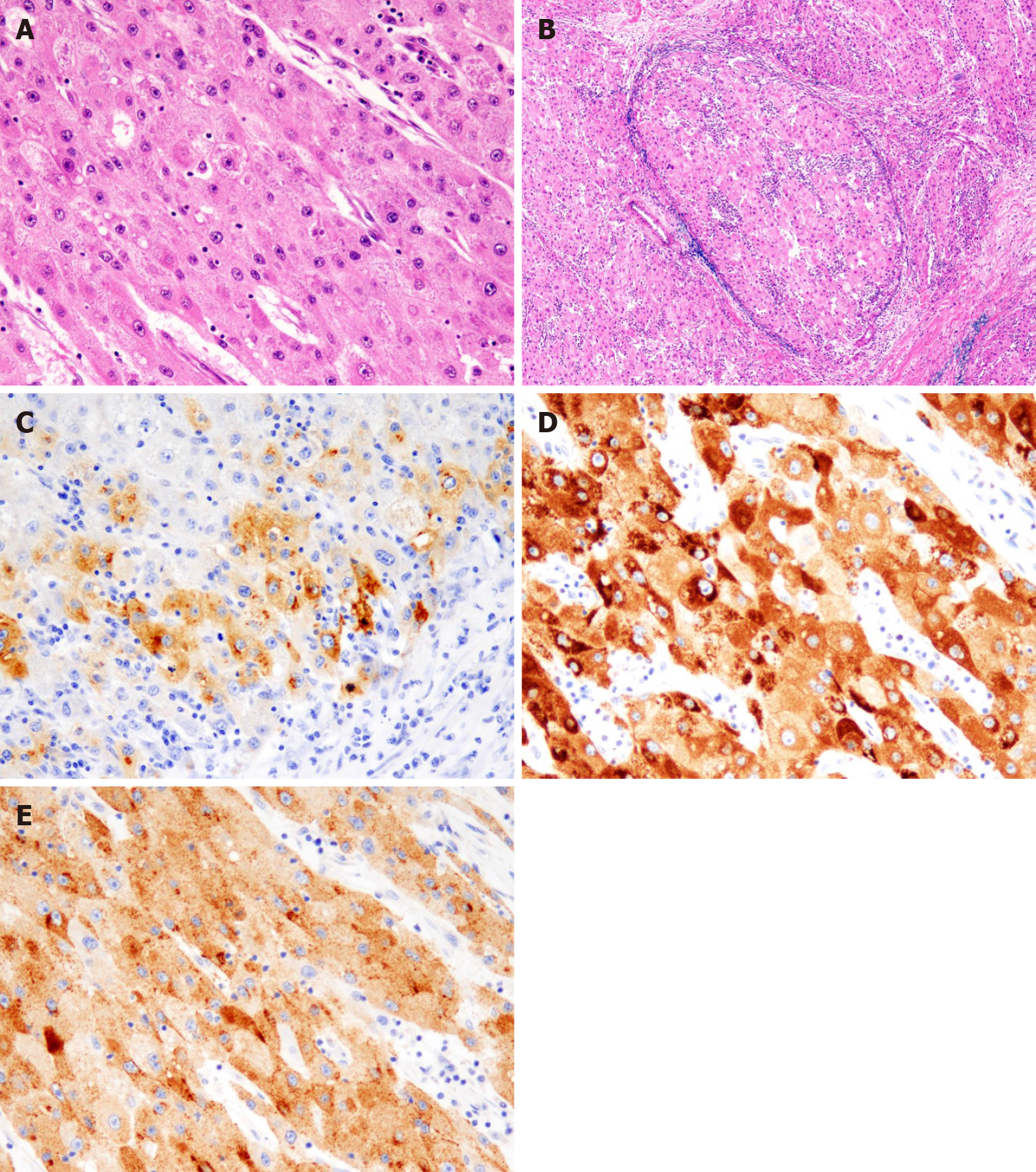 HCC is one of the most common malignancies globally, and its incidence has been increasing in the recent years. The long-term outcomes of HCC are disappointing because of the high rates of recurrence and metastasis. In an autopsy series, GI involvement of HCC was found in only 4%-12% of cases[8,9]. The metastasis of HCC to the GI tract is mostly through direct invasion to the adjacent GI tract via adhesion to the serosal side. The most frequently involved sites are the duodenum, stomach, hepatic flexure of the colon, and jejunum.

Park et al[10] reported that the modes of metastases were direct invasion of contiguous HCC (66.7%), hematogenous metastasis (16.7%), and peritoneal dissemination (5.6%). Thus, another mode of metastasis of HCC to the GI tract comprises the hematogenous spread. This is caused by tumor thrombosis and invasion via the portal system, and is disseminated by the hepatofugal portal blood flow to the GI tract. According to the literature, the interval between diagnosis of HCC and detection of the GI tract involvement ranged from 3 mo to 8 years[11,12]. Metastatic lesions in the small intestine are usually asymptomatic and are not easily discovered. GI metastasis is mostly found in HCC patients with an advanced stage, and it has a poor prognosis, with a median survival period of 7 mo[5].

In our patient, the serosal side of the ileum was free from tumor cells, and intravascular invasion of tumor cells was observed. Hence, we diagnosed that hematogenous metastasis to the ileum had occurred and it had spread in the lumen. Unlike previous reports, the tumor size of HCC was not large, and portal vein thrombosis was not detected at both the primary HCC and recurrent HCC stage. However, peritoneal dissemination was observed during the second surgery, and recurrence occurred relatively early after the first surgery. On the contrary, metastasis to the ileum occurred 70 mo after the first surgery. It was determined that disease control was good with sorafenib, a multikinase inhibitor with antiproliferative, antiangiogenic, and proapoptotic properties.

Intussusception is common in children, whereas it is a rare condition in adults, who account for only 5% of the cases of intussusceptions. It is a rare cause of intestinal obstruction in adults (< 1% cases)[13,14]. According to the etiology of adult intussusception, the rates of malignant tumor, benign tumor, and idiopathic causes were 32.9%, 37.4%, and 15.1%, respectively[15]. Breast cancer, lung cancer, and malignant melanoma are reported to be the major causes of small bowel obstruction due to metastatic tumors[16]. Reports of intussusception and small bowel obstruction due to small intestinal metastasis of HCC are extremely rare. Based on the review of previously published studies, there are only two cases reported so far, including our own case[17].

In general, GI metastasis of HCC has a poor prognosis. However, as in this case, extrahepatic metastasis can occur even in patients with an early tumor stage and negative portal vein invasion or occlusion. Since good disease control of intrahepatic lesions and metastatic lesions was accomplished by systemic chemotherapy, and because of the long interval before the patient developed small intestinal metastasis, it is considered that the patient achieved long-term survival due to multidisciplinary therapy.

We herein report an extremely rare case of intussusception due to hematogenous metastasis of HCC to the ileum. Even if the prognosis of patients with GI tract metastasis of HCC is poor, selected patients may have prolonged survival because of multidisciplinary therapy including surgical resection.