Hereditary diffuse gastric cancer (HDGC) is a familial cancer syndrome often associated with germline mutations in the CDH1 gene. However, the frequency of CDH1 mutations is low in patients with HDGC in East Asian countries. Herein, we report three cases of HDGC harboring a missense CDH1 variant, c.1679C>G, from a single Japanese family.

A 26-year-old female (Case 1) and a 51-year-old male (father of Case 1), who had a strong family history of gastric cancer, were diagnosed with advanced diffuse gastric cancer. After genetic counselling, a 25-year-old younger brother of Case 1 underwent surveillance esophagogastroduodenoscopy that detected small signet ring cell carcinoma foci as multiple pale lesions in the gastric mucosa. Genetic analysis revealed a CDH1 c.1679C>G variant in all three patients.

It is important for individuals suspected of having HDGC to be actively offered genetics evaluation. This report will contribute to an increased awareness of HDGC.

Gastric cancer (GC) is the fifth most common neoplasm and the third most deadly cancer worldwide, with an estimated 783000 deaths per year[1]. Although most instances of GC are sporadic, approximately 1%-3% of cases arise as a result of inherited cancer syndromes[2]. Hereditary diffuse gastric cancer (HDGC) is an autosomal dominant cancer syndrome. The relationship between HDGC and germline mutation of CDH1, encoding the tumor-suppressor protein E-cadherin, was first identified in New Zealand families[3]. To date, over 155 germline CDH1 mutations, of which the majority are pathogenic and a number of variants are unclassified, have been described[2]. However, the detection rate of CDH1 germline mutations in patients with HDGC is low and few cases have been reported in East Asian countries[4-10]. In the current report, we present the clinical courses of three cases with HDGC harboring a germline pathogenic variant of CDH1, c.1679C>G, from a single family.

Case 1: The proband is a 26-year-old female. She was referred to our hospital for screening esophagogastroduodenoscopy (EGD) because her older brother died of GC 3 years ago at another hospital.

Case 2: A 51-year-old male (father of Case 1) visited our hospital for screening EGD because he had a strong family history of gastric cancer.

Case 3: As a result of taking the detailed family history, we noted that Cases 1 and 2 had several family members with GC. We suspected HDGC and performed genetic counselling for a 25-year-old younger brother of Case 1.

Cases 1-3: The patients had a free previous medical history.

Cases 1-3 had several family members with GC. Pedigree of this family is shown in Figure 1.

Figure 1 Pedigree of this family. Several individuals with gastric cancer were confirmed in this family. In addition to Cases 1, 2 and 3, the CDH1 c.1679C>G variant was detected in II-4 and III-15 by further genetic analysis. GC: Gastric cancer; BC: Breast cancer; HCC: Hepatocellular carcinoma.
Physical examination

Case 1: EGD revealed advanced GC at the lower and middle body of the stomach on a background of non-atrophic gastric mucosa (Figure 2A and B). The biopsy specimens demonstrated diffuse type adenocarcinoma without Helicobacter pylori co-infection. Computed tomography (CT) revealed lymph node metastases along the lesser curvature of the stomach (Figure 2C). 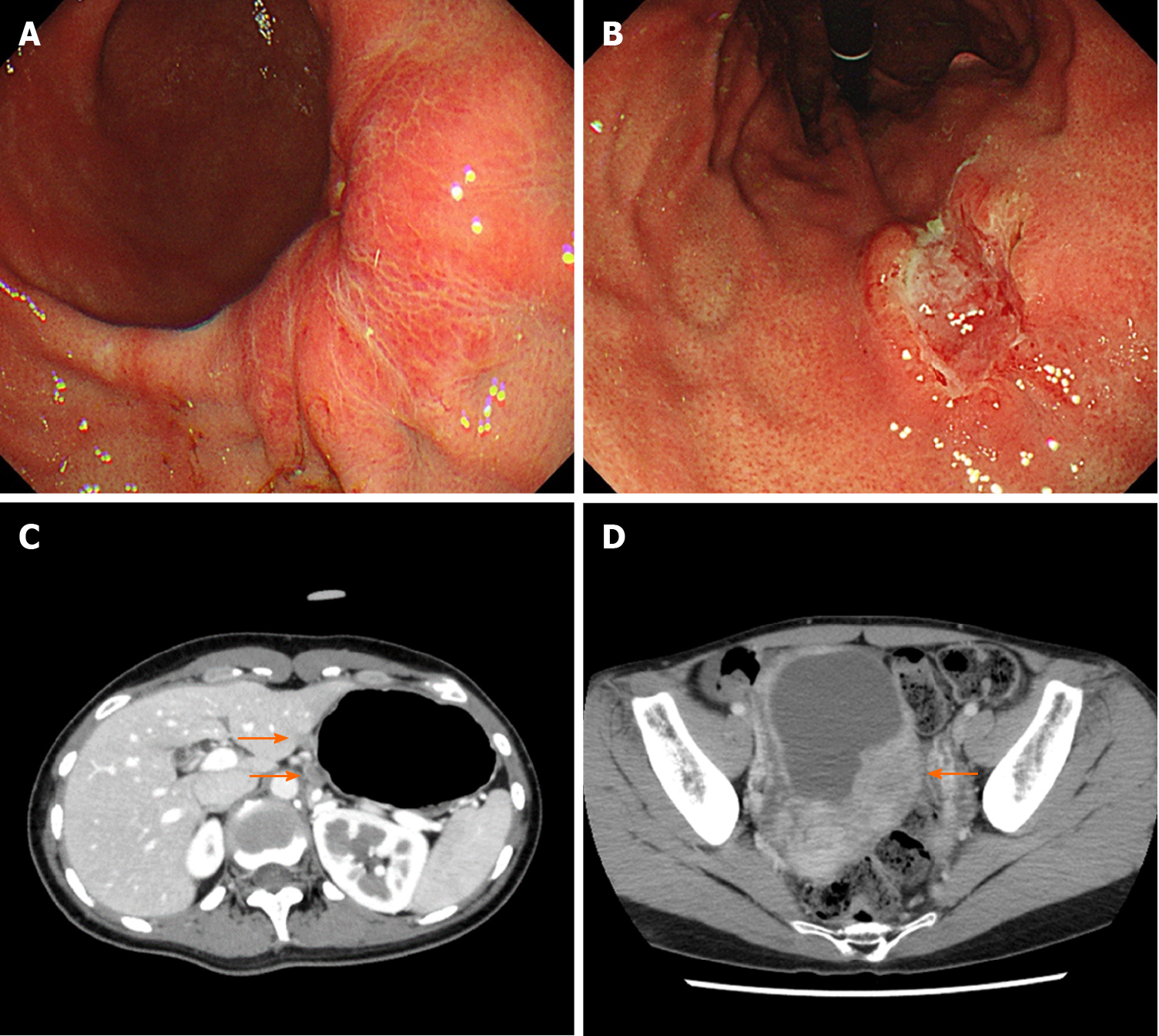 Figure 2 Representative images obtained from esophagogastroduodenoscopy and computed tomography in Case 1. A and B: Advanced gastric cancer was observed at the posterior wall of the lower gastric body (A) and at the lesser curvature of the middle body (B) in esophagogastroduodenoscopy; C: Metastatic lymph nodes were detected at the lesser curvature of the proximal stomach by abdominal computed tomography (CT) (orange arrows); D: Abdominal CT showed ovarian metastasis during adjuvant chemotherapy (orange arrow).

Case 2: The patient had surveillance EGD that showed a Borrmann type 3 tumor at the fundus on a background of non-atrophic gastric mucosa (Figure 3A). A histopathological examination of the biopsy specimens revealed diffuse type adenocarcinoma without Helicobacter pylori co-infection. Furthermore, advanced colon cancer at the ascending colon was also detected by screening colonoscopy, although histopathological analysis indicated this was an intestinal adenocarcinoma (Figure 3B). No distant metastases were identified by CT (Figure 3C). 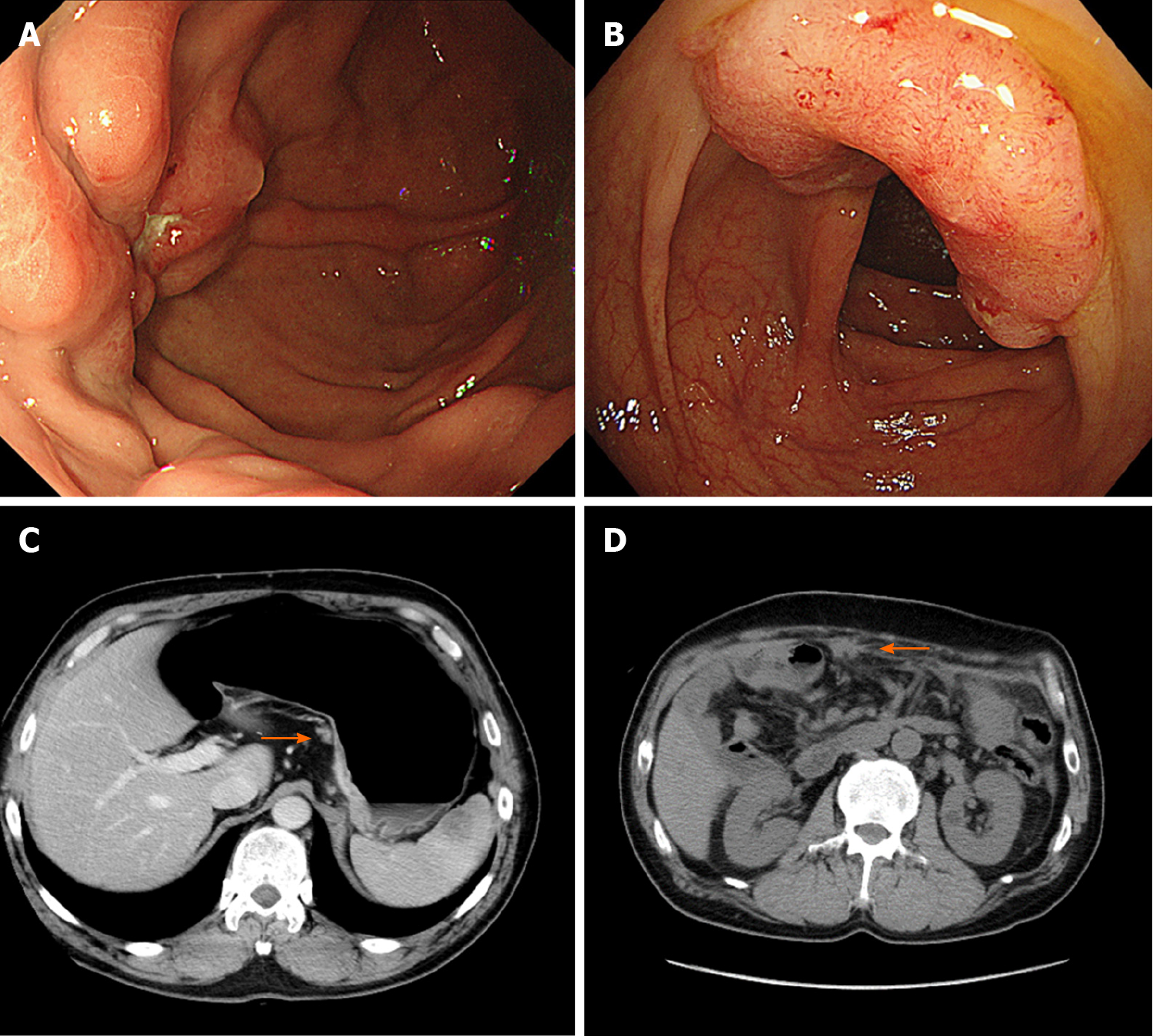 Figure 3 Representative images obtained from esophagogastroduodenoscopy, colonoscopy and computed tomography in Case 2. A: Advanced gastric cancer was observed at the fundus in esophagogastroduodenoscopy; B: Colonoscopy showed advanced colon cancer at the ascending colon; C: Metastatic lymph nodes at the lesser curvature of the proximal stomach without distant metastasis were identified by abdominal computed tomography (CT) (orange arrow); D: Peritoneal dissemination were observed by abdominal CT during the adjuvant chemotherapy (orange arrow).

Case 3: He received surveillance EGD that detected multiple small pale lesions, mainly in the greater curvature of the stomach (Figure 4A). Narrow band imaging (NBI) without magnification showed clearly isolated whitish areas, and NBI with magnification detected “wavy” microvessels, indicating diffuse type GC, in these lesions (Figure 4B and C). We took 6 targeted biopsies from these lesions, which revealed signet ring cell carcinoma (SRCC) in all the specimens. 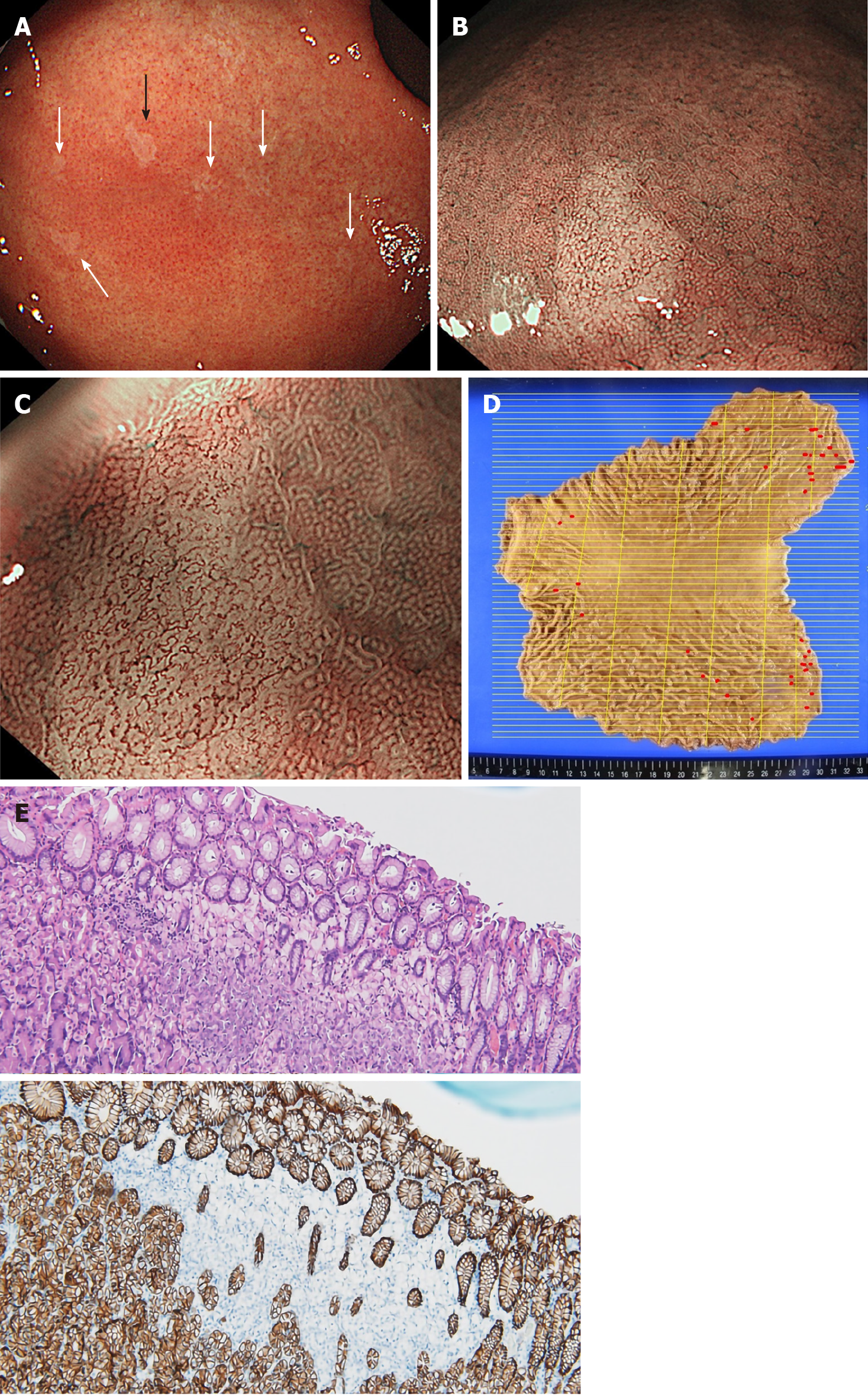 The presence of germline CDH1 c.1679C>G (p.T560R) variant: As the three patients (Cases 1, 2 and 3) fulfilled the International Gastric Cancer Linkage Consortium (IGCLC) criteria for HDGC[2], we tested all of them for germline CDH1 mutation. This genetic testing revealed a CDH1 c.1679C>G (p.T560R) variant in all three patients.

The final diagnosis of Case 1 is HDGC.

The final diagnosis of Case 2 is HDGC and colon cancer.

The final diagnosis of Case 3 is HDGC.

Total gastrectomy with D1 Lymphadenectomy was performed (pT1N0M0, Stage IA). A total of 36 SRCC foci were observed by histological examination of the entire gastric mucosa (Figure 4D). Immunohistochemistry revealed loss of E-cadherin expression in areas corresponding to SRCC foci, which was compatible with the findings in HGDC (Figure 4E)[3].

Ovarian metastasis was detected by CT during the adjuvant chemotherapy (Figure 2D). Although systemic chemotherapy was continued, the patient died two years after the diagnosis.

No evidence of GC recurrence has been observed in the 3 years after diagnosis.

Based on the result of genetic analysis, we further performed genetic counselling and genetic testing for their relatives to the extent that this was possible, and detected this variant in two of them (Figure 1). As the two p.T560R variant carriers refused prophylactic gastrectomy, we are currently continuing endoscopic surveillance for them.

Here we present an HDGC family with a missense CDH1 substitution variant, c.1679C>G (p.T560R). The p.T560R variant had been reported three times in patients with HDGC[11-13]. Yelskaya et al[12] reported that the p.T560R mutation created a novel 5¢ splice donor site that led to truncation of E-cadherin. Furthermore, Pena-Couso et al[13] performed functional analyses, which revealed that the p.T560R mutation causes an abnormal pattern of E-cadherin expression in the cytoplasm, disrupts cell-cell adhesion and promotes cellular invasion. Consistent with these reports, loss of E-cadherin expression at SRCC foci was observed in Case 3. Furthermore, we observed early recurrence and rapid progression of GC after radical resection in Cases 1 and 2. E-cadherin is a member of the cadherin family and mediates calcium-dependent cell-cell adhesion[14]. Reduction of E-cadherin expression promotes invasion and metastasis in various cancer types through initiation of the epithelial-mesenchymal transition[15]. Indeed, HDGC patients with germline CDH1 mutations have shorter survival times compared to those without germline CDH1 mutations[16]. On the other hand, the loss of E-cadherin may not be sufficient for the development of invasive gastric adenocarcinoma, because signet ring-like cells are observed in gastric mucosa of E-cadherin-deficient mice, but this does not lead to development of carcinomas that invade the submucosa[17]. In addition to the loss of E-cadherin, other genes, such as Smad4 and p53, may play important roles in tumorigenesis and metastasis in HDGC[18].

With respect to gastric endoscopic findings, multiple small pale lesions were observed with white light imaging in Case 3 and all biopsy specimens from the pale lesions revealed SRCC. Pale lesions in HDGC patients possibly reflect microscopic foci of early SRCC, although their presence is not diagnostic for this disease[2,7,10,19]. On the other hand, Hüneburg and colleagues[20] reported that combining targeted biopsies from abnormal findings (including pale lesions) with random biopsies did not improve detection of SRCC foci in CDH1 mutation-positive HDGC patients. Currently, the IGCLC guidelines for endoscopic surveillance of HDGC recommend that all endoscopically visible lesions (including pale areas) are biopsied, and after sampling of all visible lesions, five random biopsies should be taken from each of the following anatomical zones: prepyloric, antrum, transitional zone, body, fundus and cardia[18]. Nevertheless, the rate at which SRCC foci are detected in CDH1 mutation carriers following endoscopy is 45%-60%, which is relatively low[19,21-23]. Further studies are needed to improve the accuracy of endoscopic diagnosis of HDGC. Additionally, we recognized the SRCC foci as clearly isolated whitish areas by NBI and observed wavy microvessels inside the lesions by magnifying NBI. NBI has not previously been validated as a method for diagnosis of patients with HDGC[19,23]. Interestingly, the NBI findings that we observed in Case 3 are similar to those previously reported in studies of early SRCC patients[24-27]. Although the detection of small intramucosal SRCC foci is not easy because most of them are covered by a normal foveolar epithelium, the endoscopic findings that we observed in Case 3 are informative for the detection of early SRCC foci in CDH1 mutation-positive HDGC patients.

We report an HDGC family with a missense CDH1 variant, c.1679C>G (p.T560R), where active genetics evaluation and intensive endoscopic surveillance in Case 3 resulted in early diagnosis and treatment of HDGC. HDGC has rarely been reported in East Asian countries. However, the rarity of HDGC in East Asian Countries may be related to insufficient surveillance or overlooked cases and may not reflect the actual prevalence. We therefore recommend that individuals suspected of having HDGC (e.g., fulfilling the IGCLC criteria for HDGC, existence of multiple SRCC foci) should be offered genetic counselling and mutation analysis in cooperation with cancer genetics professionals. The present report will contribute to an increased awareness of HDGC and will improve the performance of endoscopic diagnosis for early SRCC foci in HDGC patients harboring a CDH1 mutation.