A 77-year-old woman was admitted because of melena and dizziness for three months. Gastroscopy and colonoscopy were performed, revealing a centrally ulcerated hemorrhagic polypoid lesion in the gastric body and multiple polypoid lesions with blood clots and hemorrhagic tendency in the colon. Histopathological examination of routine endoscopic biopsy samples showed inflammation in the gastric mucosa and tubular adenomas in the colon. The polypoid lesions were removed by endoscopic mucosal resection. Immunohistochemistry suggested a final diagnosis of epithelioid angiosarcomas. The patient refused chemotherapy and died after three months.

Core tip: Gastrointestinal epithelioid angiosarcoma is extremely rare, which is only described in individual case reports and case series. Most reported cases appeared as centrally ulcerated, hemorrhagic, highly erythematous or purpuric nodules. Histopathology is the golden standard for diagnosis. Endoscopic biopsy often obtains insufficient specimens, while endoscopic mucosal resection of suspected lesions is satisfactory for histopathological examination. We here report a case of gastrointestinal bleeding which was finally diagnosed as multifocal epithelioid angiosarcomas in the gastrointestinal tract.

A previous healthy 77-year-old woman presented with a 3-mo history of melena and dizziness and was admitted to our hospital.

The physical examination was unremarkable except for pale conjunctiva. Her hemoglobin level was 65 g/L. The platelet count, coagulation function, and blood biochemistry were within normal limits. The antinuclear antibody titre was 1:1000, while the anti-SSA (Ro60) antibodies were weakly positive. Autoimmune diseases were ruled out by rheumatologists because there were no related symptoms. Abdominal computed tomography angiography revealed nothing remarkable.

Gastroscopy demonstrated a centrally ulcerated haemorrhagic polypoid lesion in the gastric body (Figure 1A). Colonoscopy revealed multiple polypoid lesions with blood clots and hemorrhagic tendency in the ileocecum, ascending colon, transverse colon and sigmoid colon (Figure 1B-D). Routine endoscopic biopsies showed inflammatory infiltration in the gastric mucosa and tubular adenomas with low-grade intraepithelial neoplasia and local eosinophilic changes in the colon. Nevertheless, the pathologic findings did not conform to the endoscopic appearance of the foci. Subsequently, the lesions were resected en bloc by endoscopic mucosal resection for further diagnosis. 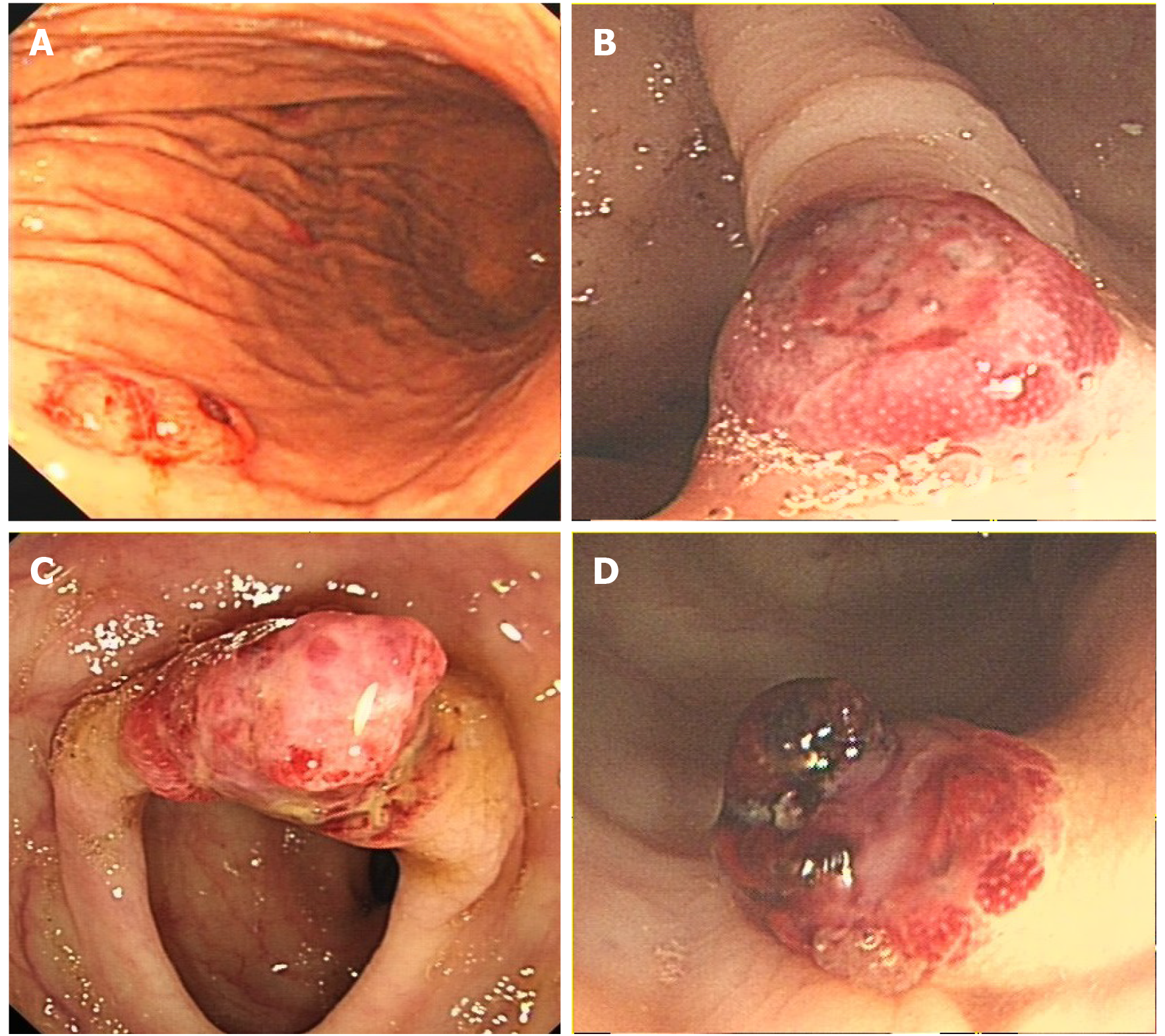 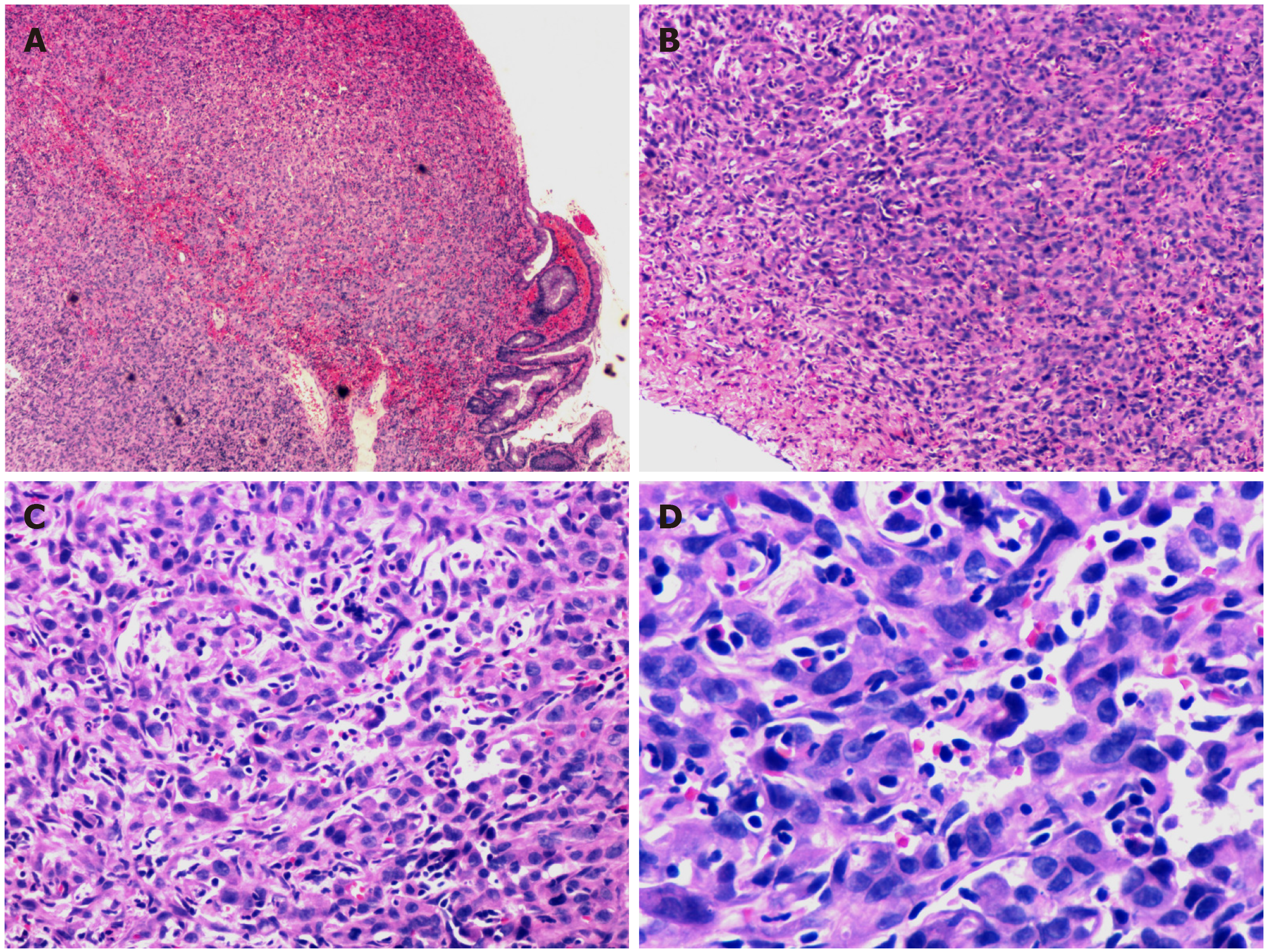 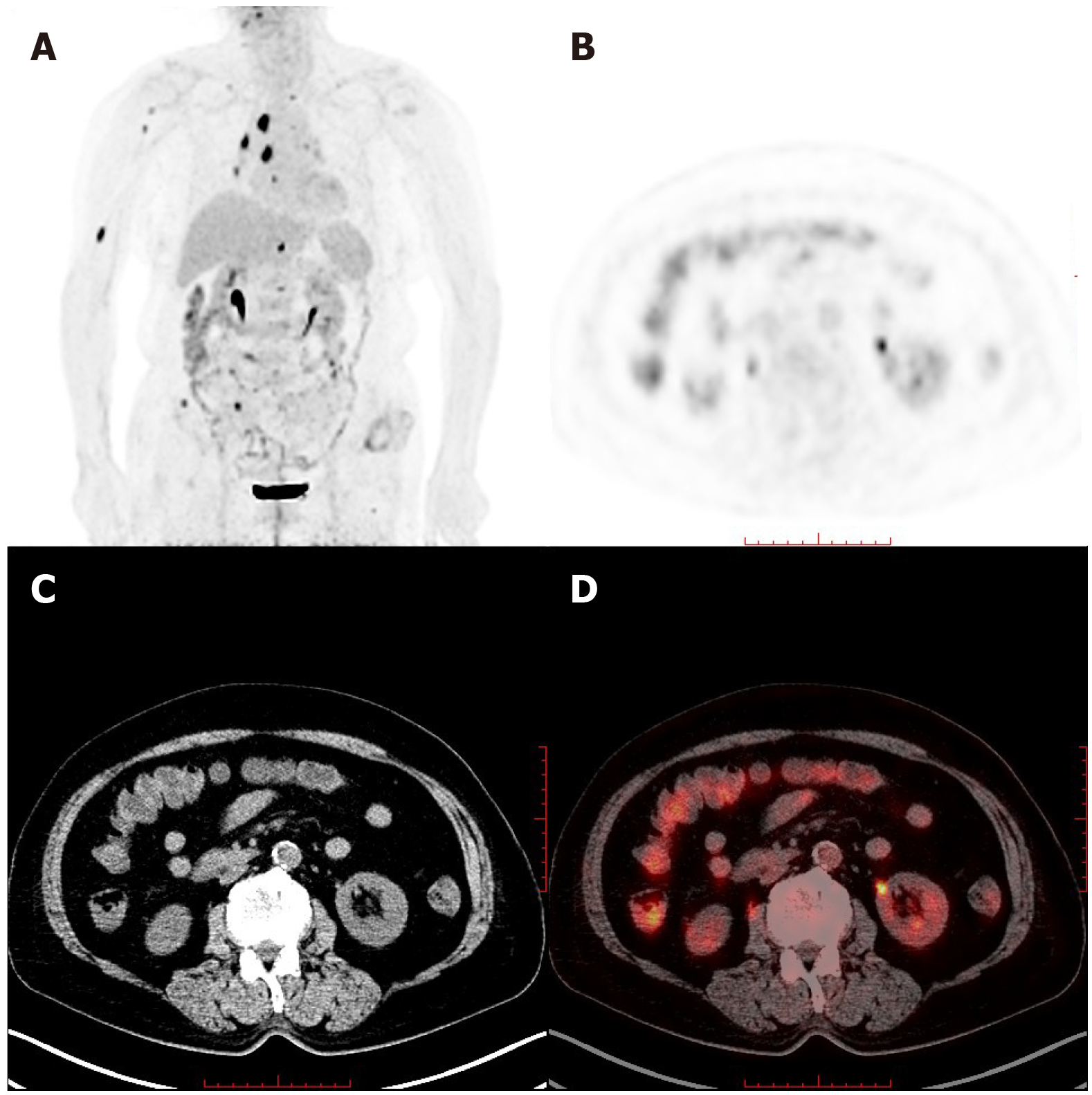 The patient refused chemotherapy and died after three months due to gastrointestinal bleeding.

Angiosarcomas may arise in any part of the body, but commonly occur in skin and superficial soft tissues, with its predilection sites in the head and neck[5]. Epithelioid angiosarcoma of the gastrointestinal tract is an extremely rare neoplasm, which is only described in individual case reports and case series[6-9], with a lack of demographic morbidity data. According to literatures, vascular tumors of the stomach constitute only 0.9%-3.3% of all gastric cancers[10], while colorectal angiosarcomas represent less than 0.001% of all colorectal neoplasms[11].

Epithelioid angiosarcoma is characterized by an extremely aggressive course, leading to a very poor prognosis[12]. Even for localized disease, patients without any therapy had a 0% survival rate at 2 years[5]. Due to the infiltrative nature of this neoplasm, recurrence and metastasis are frequent after surgical resection, even for localized disease. Cytotoxic chemotherapy can be effective in a subset of patients for a limited period, but metastatic angiosarcomas remain incurable and even fatal[5]. Targeted therapy with tyrosine kinase inhibitors usually resulted in significant responses, but these tumors are prone to developing resistance[5].

In most cases of gastrointestinal angiosarcoma, the symptoms are nonspecific, including abdominal pain, weight loss and anorexia. Overt bleeding with melena or hematochezia is less common. The patient in the present report had positive antinuclear antibody and anti-SSA, which might be secondary to the tumor. Nevertheless, until now, there is no evidence that the positivity of autoimmune antibodies has association with angiosarcomas. Further studies are needed to clarify their relationships.

Almost all reported lesions that occurred in the gastrointestinal tract appeared endoscopically as centrally ulcerated, hemorrhagic, highly erythematous or purpuric nodules/masses[13]. Endoscopy with direct visualization and biopsy is crucial for diagnosis. However, endoscopic biopsy often obtains insufficient specimens and leads to the possibility of a missed diagnosis[14], similar to this case. It is well known that invasive carcinomas are likely to be covered by normal epithelium or intraepithelial neoplasm. Consequently, findings of the biopsy on their surface usually do not reflect the invasive components. Possible efforts to obtain additional histopathological findings must be made. In the present case, en bloc endoscopic mucosal resection of the suspected lesions in the colon was satisfactory for the histopathological examination. Due to the confirmation of malignant angiosarcomas, the patient refused to have another large-scale biopsy of the gastric lesion, in which the endoscopic performance was similar and typical.

Epithelioid angiosarcoma mimics carcinoma morphologically and contains numerous vasoformative structures. Because of the high architectural and cytological variability, pathological diagnosis is difficult. Immunoreactivity for endothelial and epithelial cell markers can confirm the diagnosis. This innate characteristic of epithelioid angiosarcoma corresponds to the tendency of gastrointestinal bleeding. PET/CT has been reported to detect primary uterine and pulmonary epithelioid angiosarcoma[15,16] and is of great value in identifying metastases.