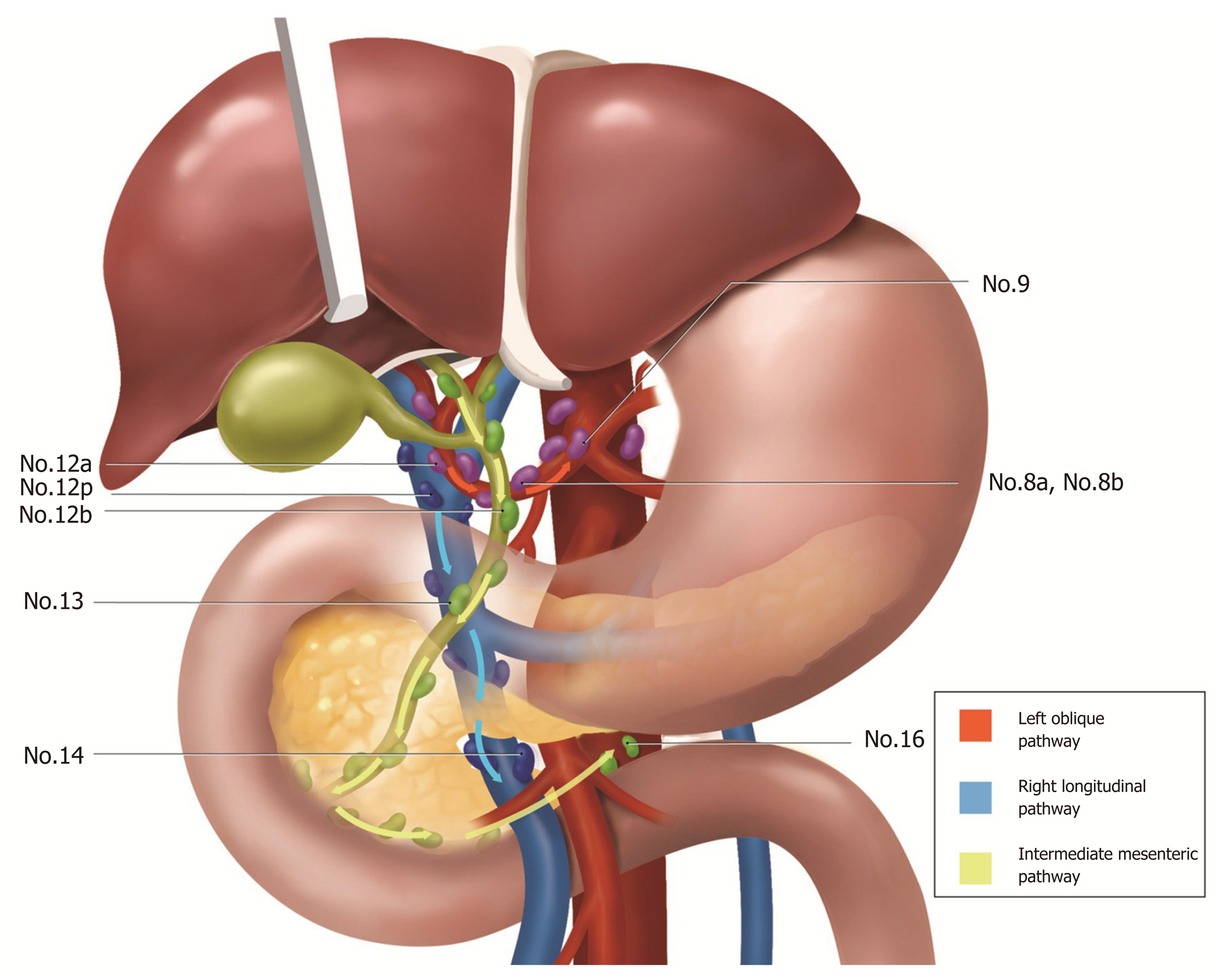 Figure 1 The lymphatic drainage of the hilar bile duct. Three paths: (1) Left oblique pathway: From the hepatic artery (No. 12a) along the common hepatic artery (No. 8) to the celiac lymph nodes (No. 9); (2) Intermediate mesenteric pathway: First descending along the bile duct (No. 12b) and then runs on the posterior surface of the pancreas head (No. 13), and then to the para-aortic lymph node (No. 16); and (3) Right longitudinal pathway: Descending along the portal vein (No. 12p) to reach the superior mesenteric vein and then enters the superior mesenteric nodes (No. 14).
Dispute in the dissection scope of lymph nodes in hilar cholangiocarcinoma

In HCCA, lymph nodes metastasis around the bile duct are most commonly encountered (27.1%-42.7%), followed by the portal vein (30.9%-35.7%), common hepatic artery (27.3%-31.3%), para-aorta (17.3%), posterior pancreatic head (14.5%-50%), and celiac trunk (6.4%-14.3%)[11,12]. The guideline for hepatobiliary cancer from the National Comprehensive Cancer Network (NCCN) suggests that the standard lymph node dissection of HCCA includes lymph nodes along the hepatoduodenal ligament, and the posterior of the pancreatic head, i.e., No. 12 and No. 13 lymph nodes. Lymph node metastasis beyond the above was considered a contraindication of radical surgery[13]. Unlike the NCCN guidelines, the JSHBPS provided a more detailed description for the dissection extent of lymph nodes in radical resection of HCCA. Mantel et al[14] reported that lymph node metastasis or micrometastasis often occurs in lymph nodes around the portal vein, common hepatic artery, and the posterior of the pancreatic head. In N0 patients, the 5-year survival rate of patients with lymph node micrometastasis was significantly lower than those without micrometastasis (27% vs 54%, P = 0.01), and not significantly different to N1 patients (27% vs 15%, P = 0.54)[14]. Consequently, the JSHBPS recommended that the lymph nodes in the first and second stations, i.e., the No. 8, 12, and 13 groups[10], should be dissected for HCCA, which seems to be more reasonable. However, the JSHBPS also believed that No. 16 lymph nodes metastasis is a contraindication for radical resection[10].

On the one hand, there is no consensus on the dissection extent of lymph nodes, even in different guidelines[10,13], for the surgical treatment of HCCA. The accuracy of taking the involved site of lymph node metastases as the basis of tumor staging is controversial and the evidence is not effective to guide clinical practice. On the other hand, total lymph node count (TLNC) and lymph node ratio (LNR) play a positive role in prognostic stratification for gastrointestinal tumors. Hepatobiliary surgeons try to apply TLNC and LNR in HCCA to guide the dissection extent of lymph node and prognostic stratification[3,20,24,35-38].

Some other scholars believe that the LNR should be used as a staging criterion for HCCA. In 2010 and 2013, Giuliante et al[1] and Guglielmi et al[35] analyzed the LNR of 62 patients and 75 patients with HCCA who underwent radical resection, respectively. The results showed that patients with an LNR of 0.25 or lower had significantly better survival. Therefore, Guglielmi suggested that the LNR had a predictive value for prognosis in HCCA. In 2011, Oshiro et al[22] investigated the LNR of 60 patients with resected extrahepatic cholangiocarcinoma (hilar, n = 31; distal, n = 29) and found that patients with an LNR of 0.2 or lower had significantly better survival. Therefore, Oshiro et al[22] also considered LNR to be an effective prognostic factor after radical resection of extrahepatic cholangiocarcinoma. In 2013, Aoba et al[3]’s study of 320 patients also showed that those with an LNR ≤ 0.2 had a significantly better survival than patients with an LNR > 0.2. Additionally, Aoba et al[3] also found that patients with a TLNC ≥ 16 had a significantly lower LNR than patients with a TLNC of 3-5 or 6-10. In multivariate analysis, LNR is not an independent predictor of prognosis. It was confirmed that the LNR had a better stratification effect than that of the site of lymph node metastasis involvement on prognosis in a number of studies[1,2,11,20,24,30,39], but the median TLNC in the above studies was mostly 3.

Although the pathologists and medical oncologists typically prefer more lymph nodes for accurate staging of any cancer, the surgeon should balance other factors, e.g., the anatomic location, difficulty in removing more lymph nodes, intra-operative and long-term complications associated with extensive lymph node dissection, etc. Fortunately, Ma et al[31] reported that incidence of lymphorrhagia, duration of postoperative stay, 30- or 90-d mortality, and other complications were comparable between the traditional regional lymphadenectomy and extended lymphadenectomy groups. Thus, extended lymphadenectomy could be performed in selected patients with resectable HCCA.

In summary, we believe that for patients with resectable HCCA, along with the improvement of surgical techniques, extended lymphadenectomy including the No. 16 group may obtain more lymph nodes to more accurately stage the tumor and to reduce the influence of the TLNC on the LNR when compared with single enlarged No. 16 lymph node biopsy. In addition, it may also help to prevent the occurrence of lymph node micrometastases, which will avoid the difficult to determine cause of postoperative enlargement of the No. 16 group of lymph nodes. Extended lymphadenectomy was reported to more accurately stage HCCA and bring survival benefits, and the role of extended lymphadenectomy in HCCA should be further confirmed.

The authors acknowledge the guidance of the Professor of Biliary Surgery in West China Hospital.