Core tip: The pathophysiology of irritable bowel syndrome (IBS) is not completely understood. Understanding the pathophysiology of IBS may enable us to find an effective treatment for this disorder. The density of intestinal stem cells is low in patients with IBS. Moreover, the differentiation of stem cells into enteroendocrine cells is abnormal. It seems that these abnormalities in intestinal stem cells is the cause of the low density of enteroendocrine cells seen in patients with IBS. It is believed that the low density of enteroendocrine cells is behind the gastrointestinal dysmotility, abnormal secretion/absorption and hypersensitivity observed in patients with IBS. This review presents the observations that suggest that the factors known to contribute to the pathophysiology of IBS may exert their effects through affecting the intestinal stem cells.

Irritable bowel syndrome (IBS) is a wide spread condition affecting 12.1% of the world population[1,2]. The prevalence of IBS differs considerably between different parts of the world with the lowest prevalence in Asia and the highest in South America[1]. The cardinal symptom of IBS is intermittent abdominal pain accompanied by altered bowel habits and abdominal bloating/distention[3]. There is no biochemical, radiological or clinical test/examination for diagnosing IBS and the IBS diagnosis is based on symptoms assessment[4]. IBS reduces significantly the patients’ quality of life in the same degree as major chronic diseases such heart failure, renal failure, diabetes, and inflammatory bowel disease[2,3]. It has been reported that 12%-14% of primary care patient visit, and 28% of referrals to gastroenterologists are IBS patients[5-7] and consequently IBS patients are more common in the healthcare than patients with diabetes, hypertension or asthma[8,9]. There is no effective treatment for IBS and the available treatment in clinic is directed to symptom relief[4].

FCACORS INVOLVED IN THE PATHOPHYSIOLOGY OF IBS
Genetics

Studies of family history and family cluster as well as twin studies provided strong evidences that IBS is hereditary[14-21]. However, the possible mutant gene(s) responsible for IBS is/are not found yet[2].

Patients with IBS avoid certain food items as they believe they worsen/trigger their symptoms[22-26]. However, there is no difference in intake of calories, or the meal patterns between IBS patients and community controls[23,27,28].

The effect of diet on IBS symptoms cannot be explained by food allergy/ intolerance[29]. However, it is generally accepted that poorly absorbed carbohydrates and fibers play an important role in development IBS symptoms[29,30]. The intake of low fermentable oligo-, di-, monosaccharides and polyols-diet and National Institute for Health and Care Excellence-modified diet improve both symptoms and quality of life in IBS patients[22,29,31,32]. However, a recent review and meta-analysis showed that there is very low quality evidence showing that low fermentable oligo-, di-, monosaccharides and polyols diet reliefs IBS symptoms[33].

Based on a case report published in 1978, non-celiac gluten sensitivity was coined[34-36]. In this case, a patient without celiac disease, suffered from abdominal pain and diarrhea who experienced symptoms improved when she used gluten-free diet. Several studies showed that withdrawal of wheat products in patients with non-celiac IBS-like symptoms improve these symptoms[37-42]. However, a double-blind placebo-controlled study showed that it is fructan in the wheat rather than gluten that trigger IBS symptoms[43]. In a recently published meta-analysis concluded that there is insufficient evidence that gluten-free diet improves IBS symptoms[33].

The gastrointestinal microbiota comprises 12 different bacteria phyla, but most of the gut bacteria belongs to the Proteobacteria, Firmicutes, Actinobacteria and Bacteroidetes[44,45]. The anaerobic Firmicutes and Bacteroidetes phyla dominate the bacterial population in the intestinal of healthy adults, with a few members from of the Proteobacteria and Actinobacteria phyla[45,46]. A low microbial diversity in the gut (dysbiosis) has been reported to be associated with several diseases[47,48].

The gastrointestinal endocrine cells are scattered in-between the epithelial cells facing the gut lumen (Figure 1)[52-54].These cells are localized to the stomach, small-and large intestine[53]. Among the different segments of the gastrointestinal tract the density of the endocrine cells is highest in the duodenum (Figure 2)[25]. These cells secret over 10 different hormones that interact and integrate with the enteric, autonomic and central nervous system to regulate: Gastrointestinal motility, secretion of enzymes and bile acid, absorption of nutrients, visceral sensation, gastrointestinal cell proliferation, local immune defense and appetite[3,22,52,55-69]. These cells have sensory microvilli that project into the gastrointestinal lumen that sense gastrointestinal lumen contents and respond by releasing their hormones into the lamina propria[70-82]. These hormones can act locally on the nearby structures (paracrine mode of action) or reach the blood stream and act on far structure (endocrine mode of action)[70-82]. 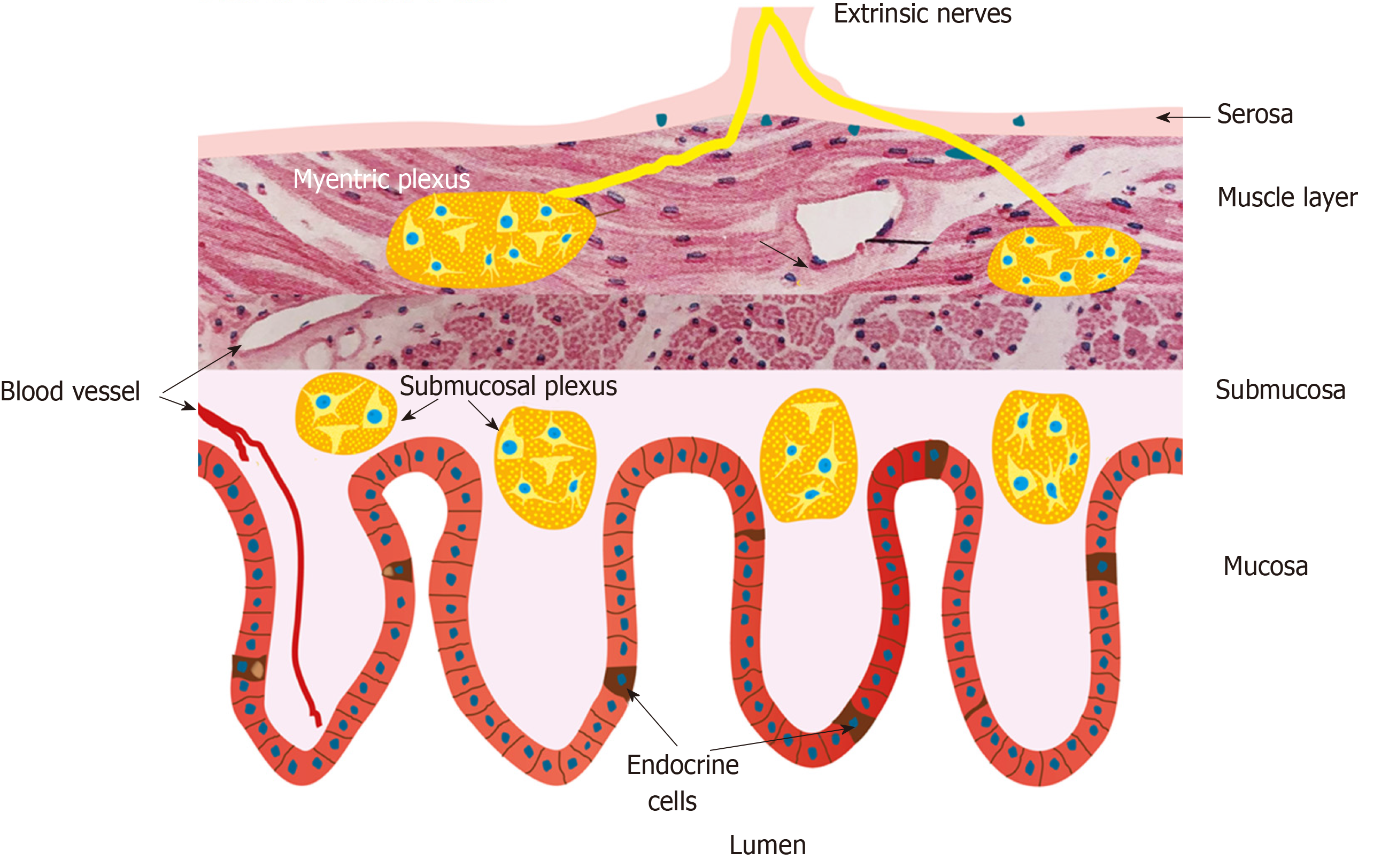 Figure 1 Schematic illustration of the enteroendocrine cells and their anatomic relation to the enteric nervous system. The enteroendocrine cells are scattered among the epithelial cells lining the intestinal lumen. They interact and intergrade with each other’s and with enteric nervous system. Reproduced from El-Salhy et al[54] by permission of the authors and the publisher. 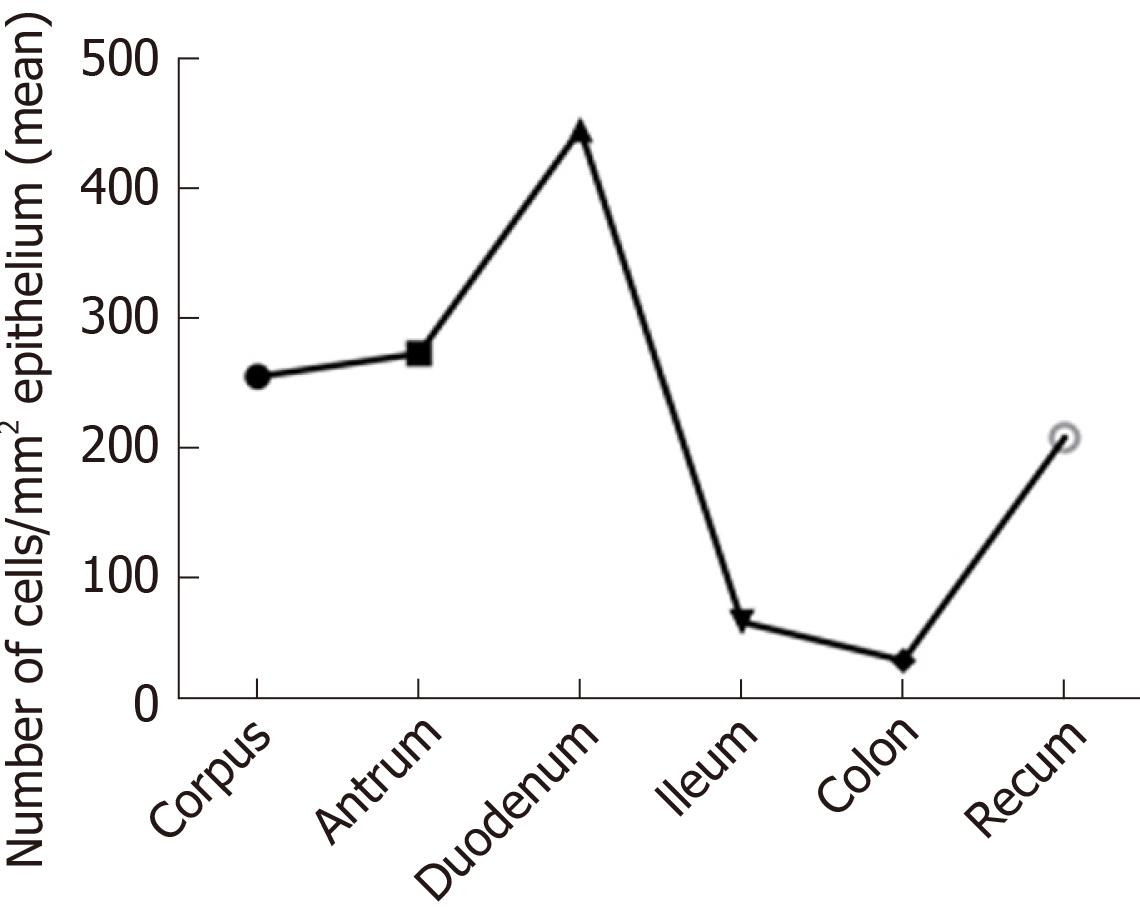 Figure 2 The density of gut endocrine cells as detected by chromogranin a immunoreactivity. Reproduced from El-Salhy et al[25] by permission of the authors and the publisher. 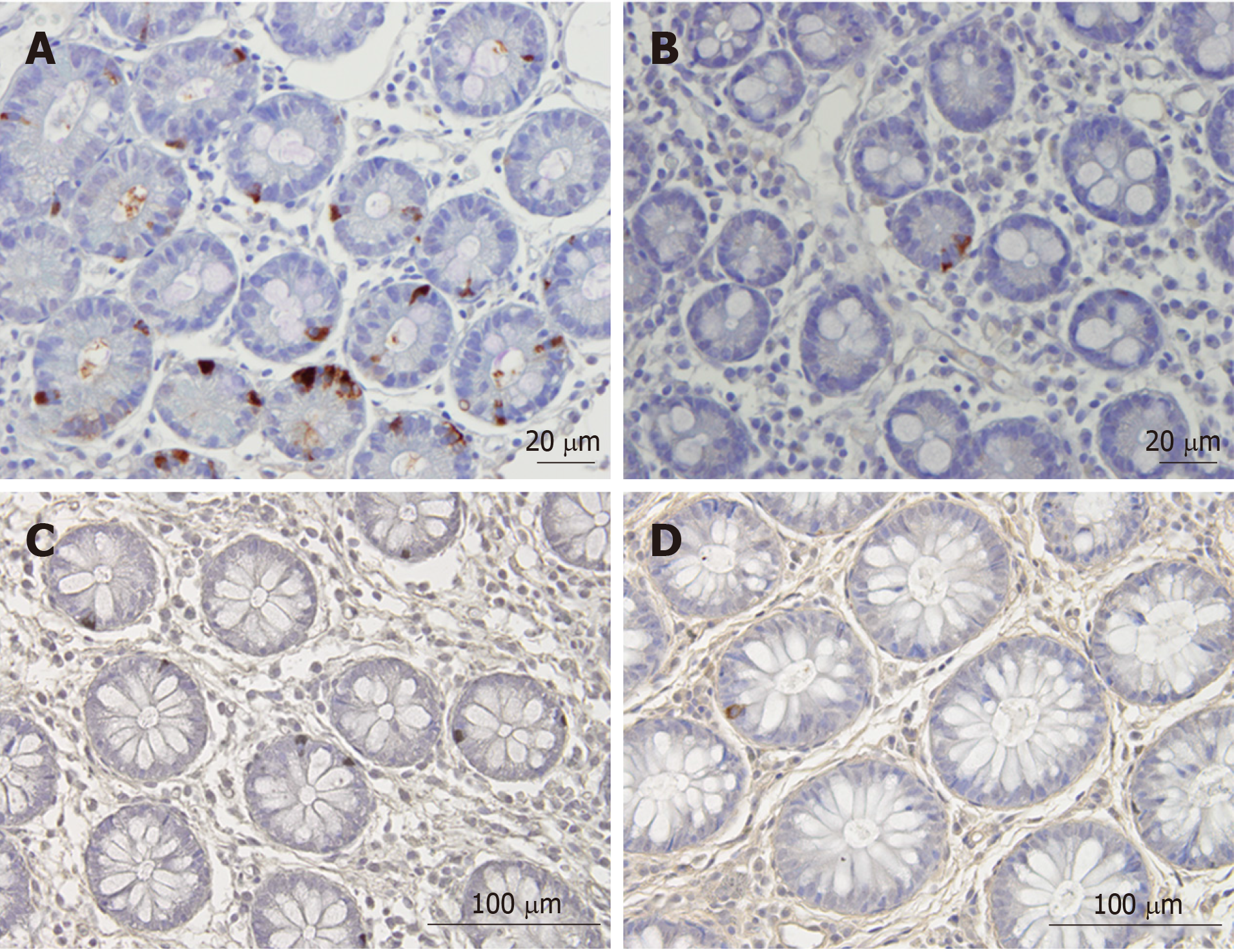 Stress is defined as an acute threat, real or perceived, to the homeostasis of an organism[10]. Stress is a known factor that trigger/worsen the IBS symptoms[98]. The exact mechanisms by which stress affects IBS are not exactly known. However, the negative effect of stress on IBS symptoms is believed to be caused by an interaction between the gut and the central nervous system (gut-brain axis)[10].

Intestinal low-grade inflammation is believed to be a factor that contribute to the pathophysiology of IBS[86]. Low‐grade inflammation in the intestinal mucosa occurs only in a subset of IBS, i.e., post-infectious IBS, but not in sporadic (non-specific) IBS[86,99-102].

Each intestinal crypt contains four to six pluripotent (stem) cells[103]. Stem cell perform 2 activities, namely self-renewal by dividing into identical stem cell (clonogeny) to maintain a constant number of stem cells and differentiation progeny[103]. In the differentiation progeny, the stem cells differentiate into all cell types of the villus epithelium through 2 cell lineages: The secretory lineage giving raise to goblet cells, endocrine cells and Paneth cells, and the absorptive lineage giving raise to absorptive enterocytes. This differentiation takes place through a series of precursors (progenitors) (Figure 4)[68,69,104-112]. 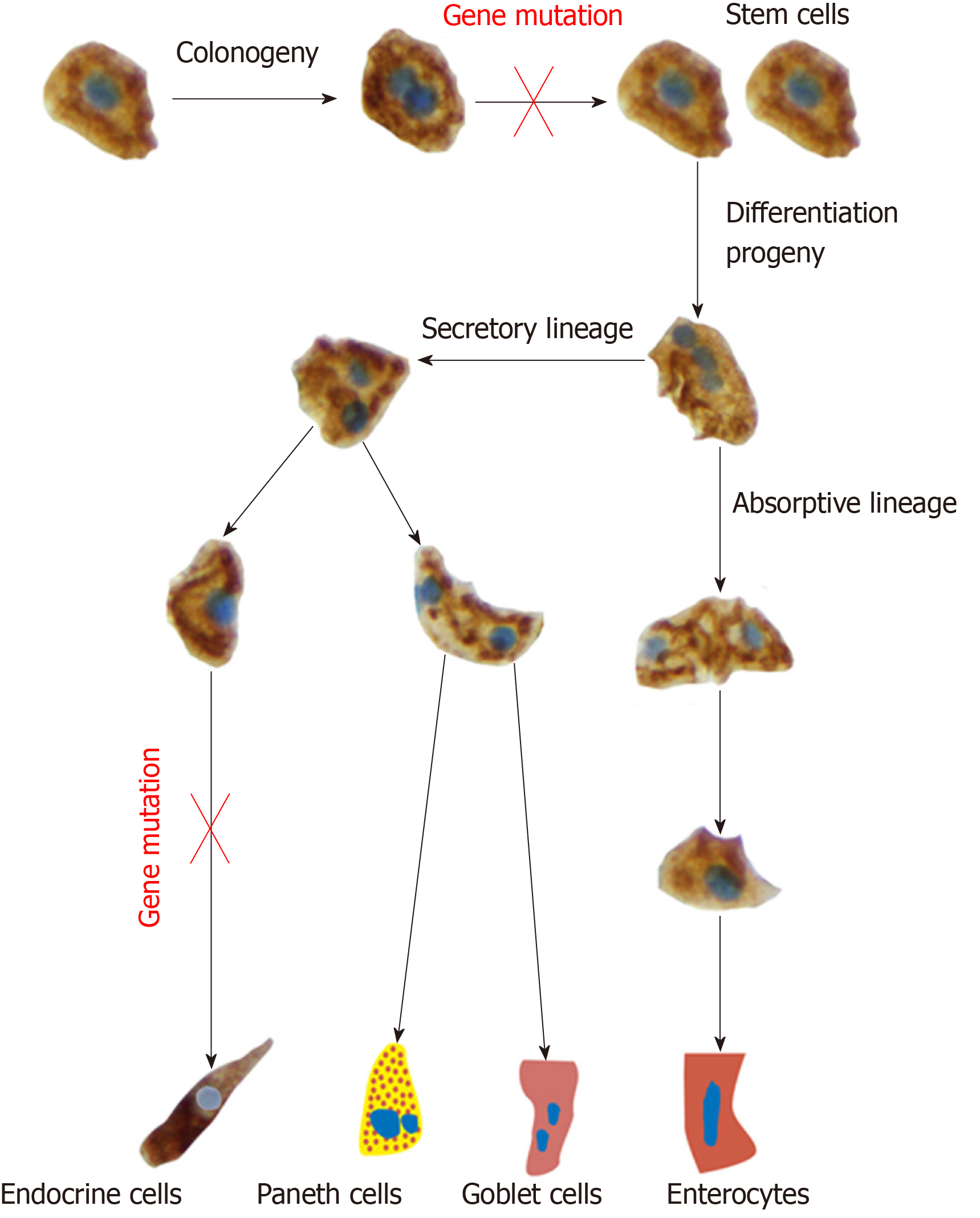 Figure 4 The intestinal stem cell divides into 2 identical cells (clonogeny). One of these cells remain inactive, while the other stem cell differentiates into all cell types of the villus epithelium through 2 cell lineages: The secretory lineage giving raise to goblet cells, endocrine cells and Paneth cells, and the absorptive lineage giving raise to absorptive enterocytes. This differentiation occurs through a series of progenitors. The observations that the density of stem cells and progenitors for enteroendocrine cells, led to the assumption of gene mutations affecting the stem cell and neurogenin 3 gene.
The relation between the abnormalities in intestinal stem cells and enteroendocrine cells 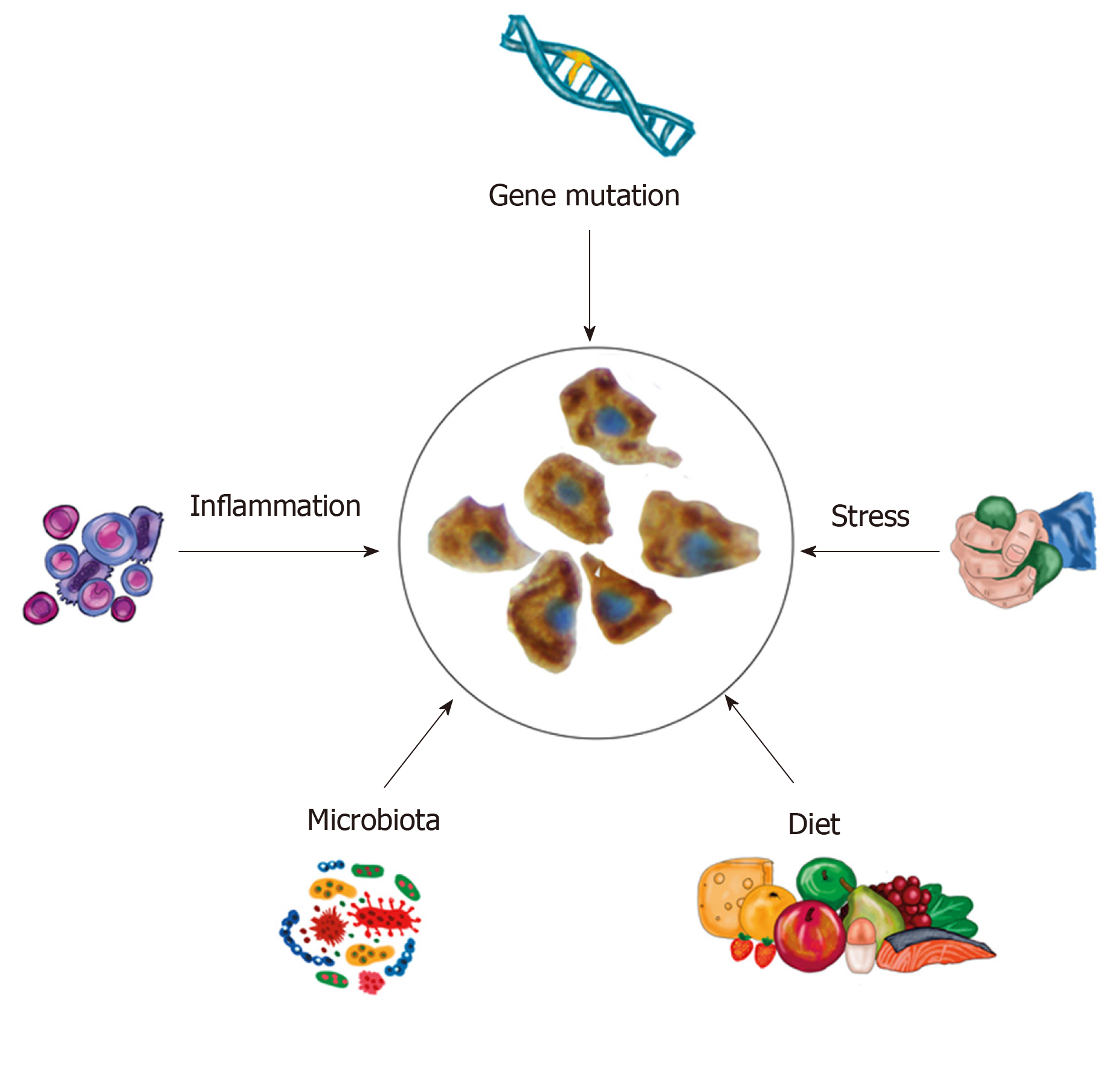 Figure 7 Schematic drawing to illustrate the hypothesis that intestinal stem cells play a central role in the pathophysiology of irritable bowel syndrome. The abnormalities in the intestinal stem cells can be caused by gene mutation or by environmental factors such as diet, intestinal microbiota, stress and low-grade inflammation.
CLINICAL IMPLICATIONS

Assuming that IBS is caused by abnormalities in stem cells, which in turn caused by genetic and environmental factors, intestinal stem cell transplantation might be an effective tool in the treatment of IBS.