Porphyria is a rare disease with complex classification. Erythropoietic protoporphyria (EPP) is an autosomal recessively inherited disease, and most are caused by mutations in the FECH gene. EPP combined with liver injury is even rarer.

This paper reports a case of EPP which was admitted to the hospital with abnormal liver function and diagnosed by repeated questioning of medical history, screening of common causes of severe liver injury, and second generation sequencing of the whole exon genome. We also summarize the clinical characteristics of EPP with liver injury, and put forward some suggestions on EPP to provide a reference for the diagnosis of such rare disease.

A new mutation locus (c.32_35dupCCCT) which may be related to the disease was found by detecting the FECH gene in the pedigree of this case.

Core tip: The diagnosis of erythropoietic protoporphyria (EPP) is often delayed due to the lack of awareness among doctors. The major highlights of this paper are: (1) EPP patients may suffer from severe liver injury and be misdiagnosed for a long term with liver disease of unknown origin. Therefore, EPP screening should be performed in the clinic for patients with hepatitis accompanied by skin symptoms; (2) an invisible inheritance of EPP is difficult to diagnose, especially for patients whose parents are carriers and have no clinical symptoms; and (3) in the present case, a de novo mutation, c.32_35 dupCCCT (p.Arg13fs), was found to have a possible association with EPP disease.

Porphyria is caused by the disorder of porphyrin metabolism resulting in abnormal enzymes during hemoglobin synthesis. Various abnormal enzymes can lead to different types of porphyria. Porphyria is a rare disease with complex classification. Erythropoietic protoporphyria (EPP, OMIM #17700) is an autosomal recessively inherited disease, and its morbidity is about 1:75000 to 1:200000[1]. Genetic testing by sequencing the FECH or ALAS2 gene can confirm its diagnosis[1], and the most mutations of EPP occur in the FECH gene (OMIM *612386). EPP combined with liver injury is even rarer, occurring in about 10% of EPP patients, and only 3%-5% of such patients suffer from end-stage liver diseases (such as cirrhosis and liver failure)[2]. Liver injury is often induced by alcohol, drugs, chemicals, hepatotropic virus, etc. Serious cases may lead to death[3,4].

This paper reports a case of EPP who was admitted to our hospital with abnormal liver function and diagnosed by repeated questioning of medical history, screening for common causes of severe liver injury, and second generation sequencing of the whole exon genome.

A 26-year-old man was admitted to our hospital on September 1, 2017. He had a history of repeated fatigue, poor appetite, yellowing skin, and yellowish urine for more than three years, which aggravated one month ago.

He started suffering from repeated skin lesions at the age of 3 years. The previous skin biopsy suggested photosensitive dermatitis. He was advised to avoid light at ordinary times, which relieved his skin condition. At the age of 18, he was infected with hepatitis A, which was subsequently cured. In the past three years, he often came in contact with pesticides and more frequently suffered from dermatitis. At the age of 23, he suffered from mild jaundice, with exposed skin thickening and chapping, while he was diagnosed with abnormal liver function for the first time.

His father had suffered from “jaundice hepatitis” at the age of 12, and his mother, partner, and children were all healthy.

Physical examination upon admission showed severe yellowing of the skin and sclera, rough and irregular skin on the arm, face and perioral area, and lichenification in some areas (Figure 1). Abdominal palpation revealed swelling of the liver and spleen, and suspicious shifting dullness. 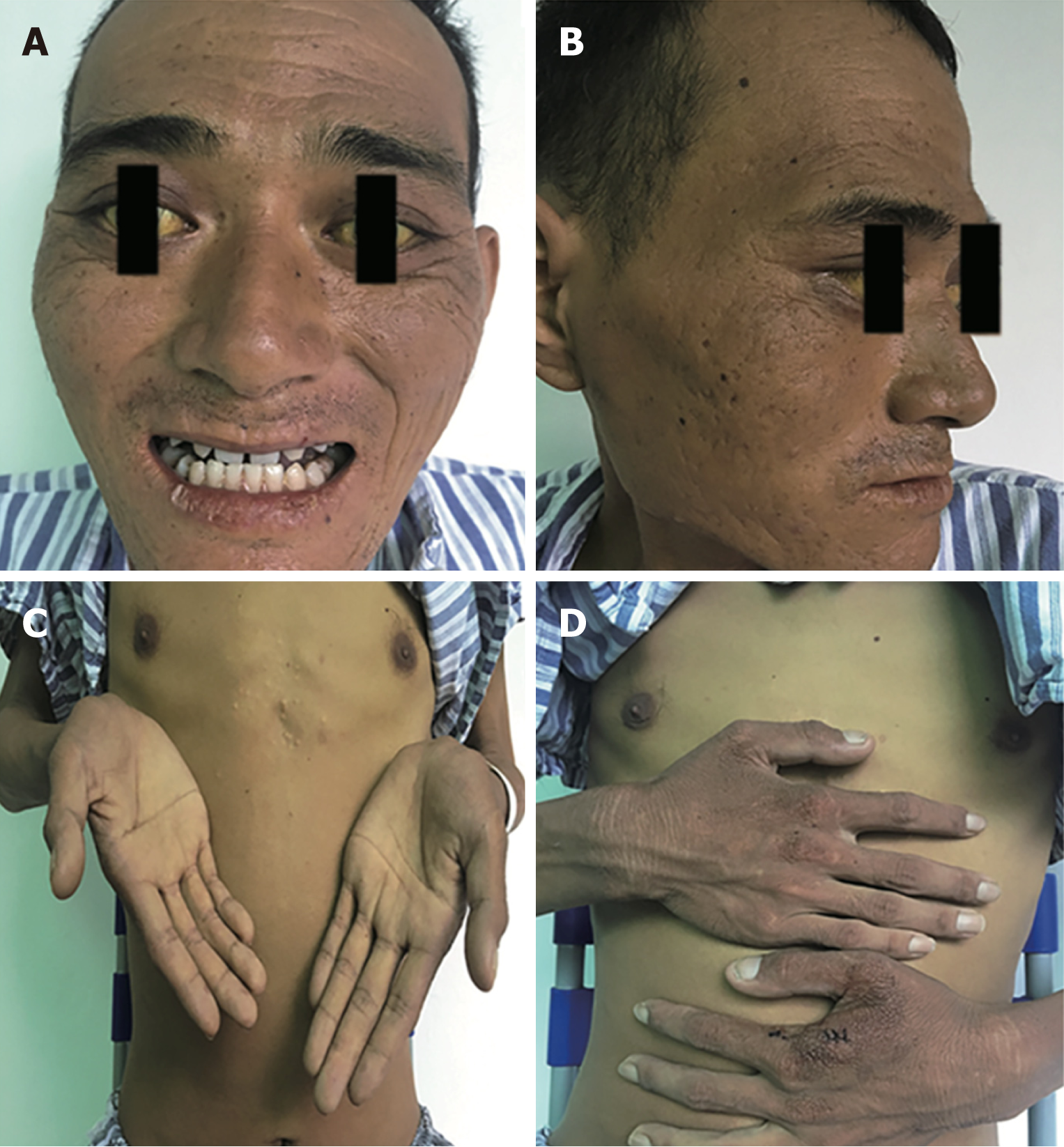 Figure 1 Clinical features. Physical examination after admission showed severe yellowing of skin and sclera, rough and irregular skin on the arm, face and perioral area, and lichenification in some areas.
Imaging examinations

Abdominal magnetic resonance imaging (MRI) suggested splenomegaly, and a small volume of ascites, and the characteristic description was fullness and enlargement of the liver with diffuse fatty infiltration of liver parenchyma (Figure 2A). 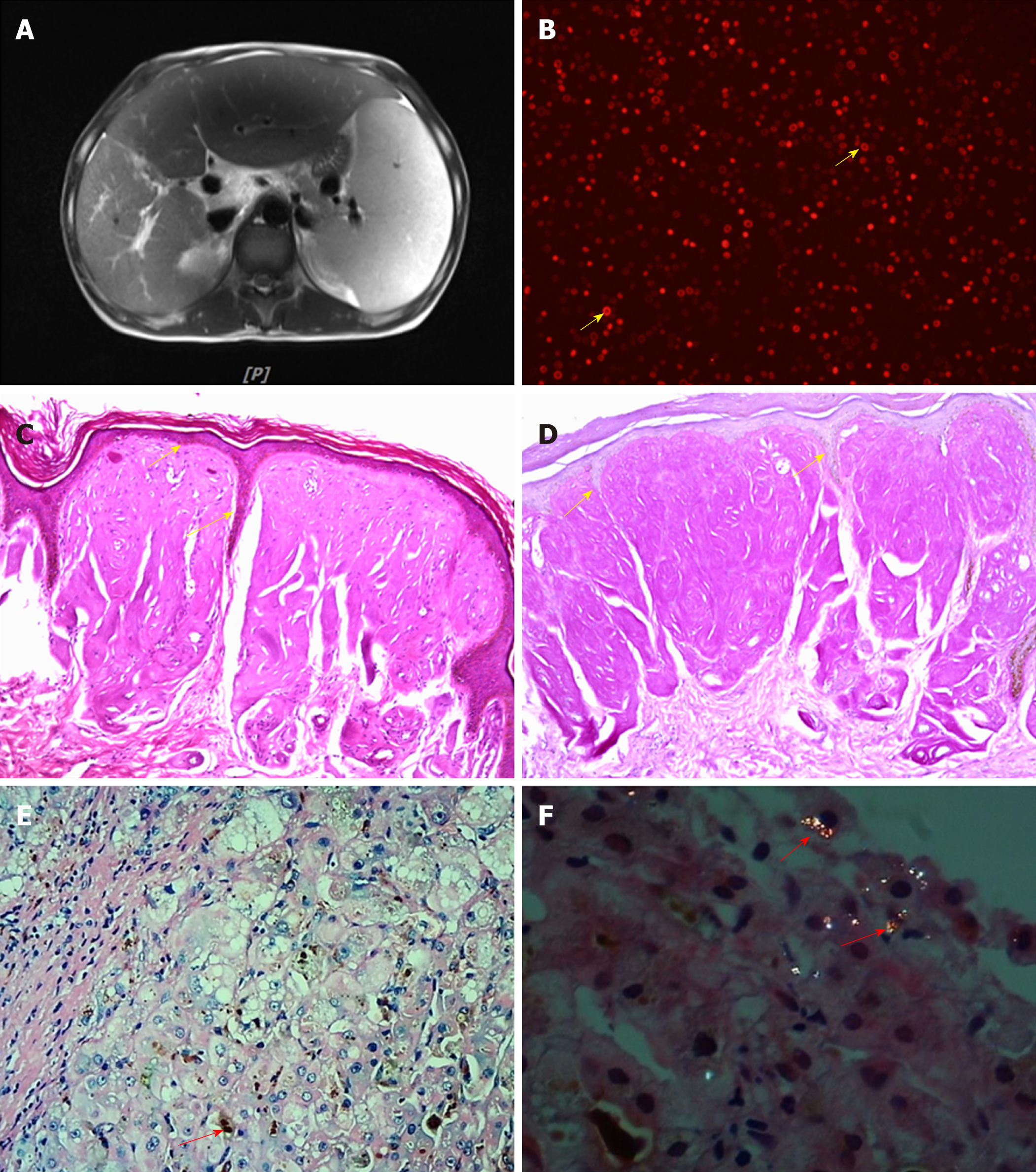 Clinical diagnosis was erythrocyte protoporphyria. We collected blood samples from his family (including himself, his parents, partner, and children), and performed second generation sequencing of the whole exon genome, which was verified by first generation sequencing (Figure 3). Although neither of his parents had the disease, the results showed that both parents carried mutations in the FECH gene. He had a compound heterozygous mutation and his FECH gene contained two mutation sites of his father [c.315-48T>C (rs2272783 OMIM612386.0015) and c.68-23C>T (rs2269219 OMIM612386.0003)] and one of his mother [c.32_35dupCCCT (p.Arg13fs)]. His partner was healthy, and his children were all carriers, but without pathopoiesia. Final genetic diagnosis was EPP. 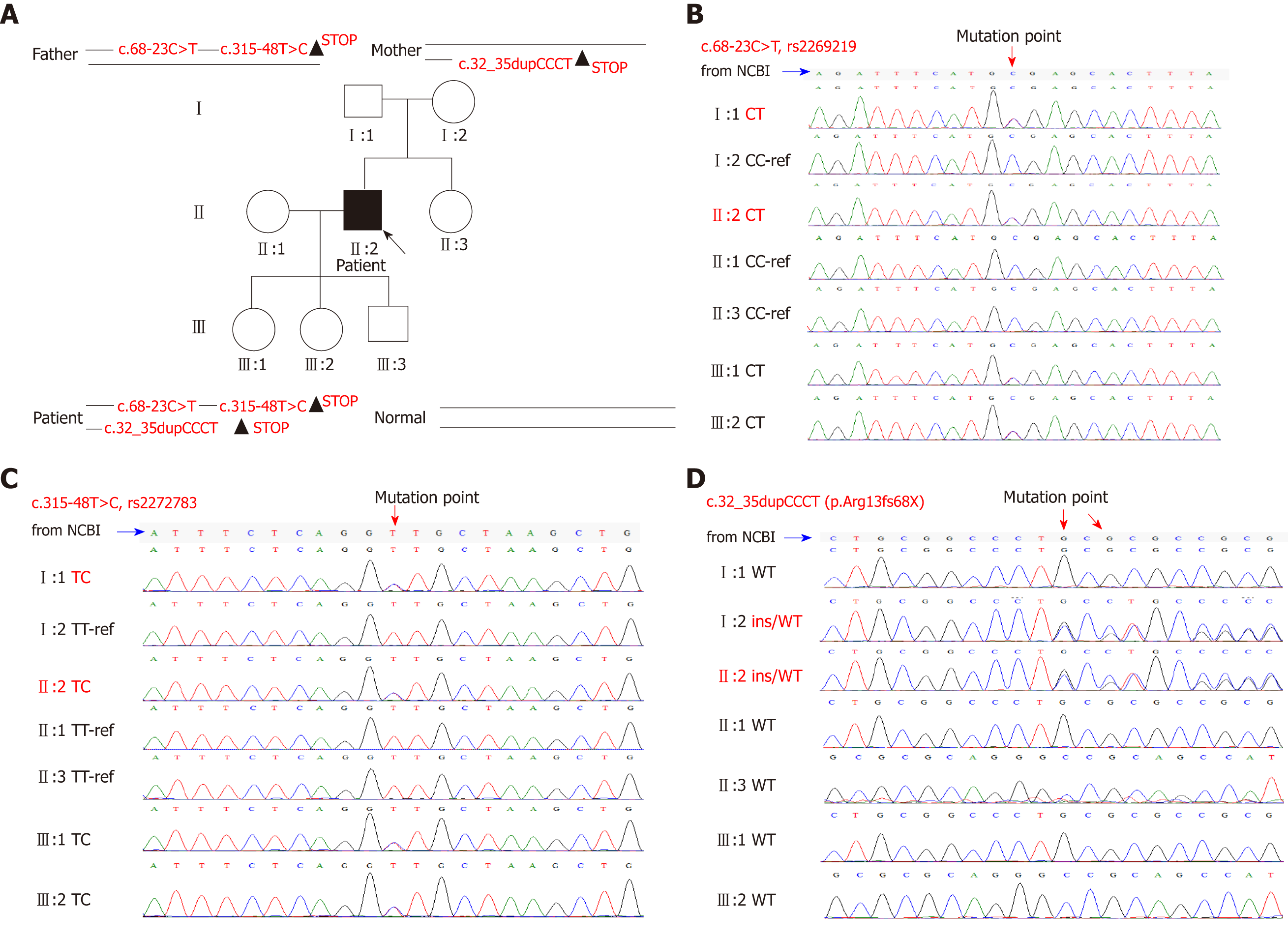 The condition was improved and the patient was discharged after treatment. Follow-up showed improvement in liver function (Table 1).

EPP is considered an autosomal recessive inheritance[5]. EPP is a genetic disease caused by mutations in the FECH gene[6]. The FECH gene is located at coordinates 18q21.31 (GRCh38): 18:57, 544, 840-57, 586, 736, containing 11 exons and 10 introns [from National Center of Biotechnology Information (NCBI)]. The defect in ferrochelatase (FECH, EC 4.99.1.1) results in an increase of protoporphyrin IX and its accumulation in erythrocytes, hepatocytes, and plasma, and the transformation of protoporphyrin into activated porphyrin, resulting in the production of various reactive oxygen species (such as oxygen free radicals and peroxides), and their interactions with proteins, lipids, and DNA in tissues, thereby causing tissue damage. The main clinical manifestations are painful skin photosensitivity accompanied by erythema in toddlers (3-5 years old). Males are more susceptible than females. The repeated exposure sites, like the dorsum of the hand and the joints, show wax-like thickening or leathery changes and there are radial atrophic textures around the mouth, called pseudo-chapping[7,8]. EPP combined with liver injury is even rarer, wherein the liver damage is aggravated, occasionally resulting in liver failure that can lead to death. Therefore, early diagnosis is very important.

However, some studies in the United States and Europe have shown a significant diagnostic delay for patients with EPP[9]. Porphyria should be considered in patients with the main manifestations of abnormal liver function accompanied by skin damage. EPP is a rare disease that manifests in early childhood, which often leads to missed diagnosis. The diagnosis of porphyria cannot be ruled out by negative urine porphyrin. Although most types of porphyria involve the urine porphyrin excretion pathway, EPP, tricarboxylic porphyria, and hereditary fecal porphyria are only excreted via the fecal pathway, which results in a negative urine porphyrin test. The red fluorescence around the red blood cells of peripheral blood smear under a fluorescence microscope is a simple and reliable method for screening EPP. Skin and liver biopsy can also be used for clinical diagnosis of EPP. Epidermal histopathology of EPP shows hyperkeratosis of the epidermis under a light microscope (hematoxylin-eosin [HE] staining; Figure 2C), a decrease in epidermis layer in some cases, numerous homogeneous red staining substances in the dermal papilla, a small amount of inflammatory cell infiltrates around the superficial vascular dermis, positive periodic acid-Schiff (PAS) staining (Figure 2D), and negative methyl violet staining. The characteristic features of liver tissue in EPP include: HE staining with light microscopy and protoporphyrin sediments showing chocolate fish-seed-like particles (Figure 2E), which can be easily missed; polarized light microscopy has a double refractive property, showing a “Maltese” cross and typical porphyrin liver deposition (Figure 2F), which is helpful for the diagnosis. EPP diagnosis depends on gene detection (Figure 3). There were two mutation sites in our patient’s FECH gene, which were inherited from his father[5,10]. The first mutation is c.68-23C>T (IVS1, C-T, -23), which is close to intron 1, causes abnormal transcriptional regulation, and may lead to the decrease of ferrous chelating enzyme activity, immunohistochemical protein quantification, and mRNA content. The second mutation is c.315-48T>C (IVS3AS, T-C, -48), which is close to intron 3. This mutation produces a potential splice site, which leads to the aberrant splicing of exon 4 during transcription and results in a low-expression protein product that reduces the peak of the normal transcript to about 25% of the normal level. It has been reported that 96% of the EPP cases were caused by complex heterozygous mutations, one of which led to a significant decrease in iron chelating enzyme activity, and the other low-expression mutation allele (c.315-48T>C) maintained residual iron chelating enzyme activity. Our patient also inherited a mutation site from his mother: c.32_35 dupCCCT, which was a frame mutation in exon 1 that led to abnormal protein encoded by FECH, which began with the 13th amino acid (arginine) and ended with the 68th amino acid for translation. The patient’s parents had no clinical symptoms because they carried the pure heterozygous mutations. The patient’s compound heterozygous mutation led to a significant decrease in the activity of FECH ferrous chelate enzyme, thus causing the disease. Notably, we found that the c.32_35dupCCCT (p.Arg13fs) was a new mutation site that was not previously reported. 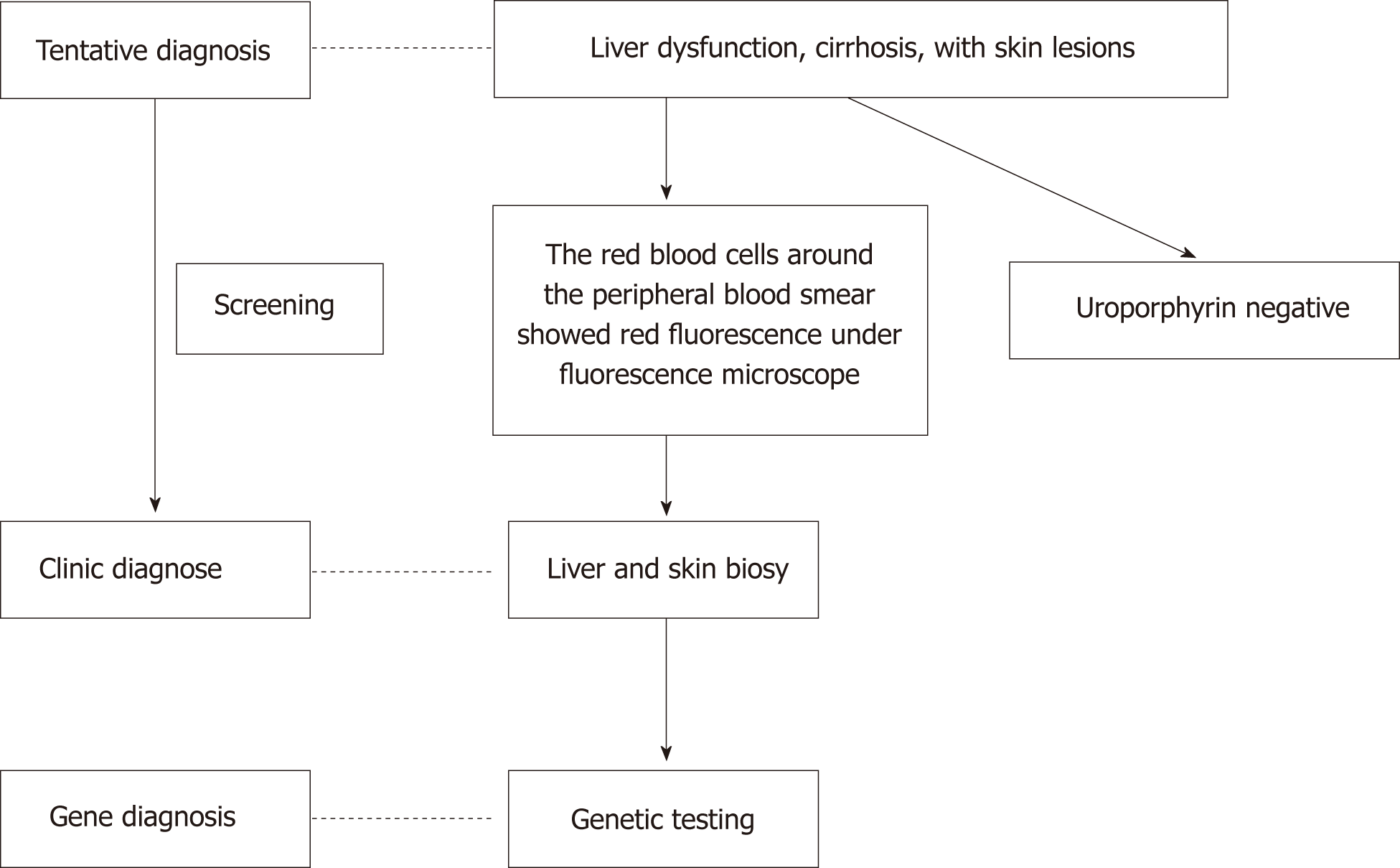