Pulmonary tumor thrombotic microangiopathy (PTTM) is a rare condition in patients with hepatocellular carcinoma (HCC); to date, few cases have been reported. While hepatic dysfunction has been focused on the later stages of HCC, the management of symptoms in PTTM is important for supportive care of the cases. For the better understanding of PTTM in HCC, the information of our recent case and reported cases have been summarized.

A patient with HCC exhibited acute and severe respiratory failure. Radiography and computed tomography of the chest revealed the multiple metastatic tumors and a frosted glass–like shadow with no evidence of infectious pneumonia. We diagnosed his condition as acute respiratory distress syndrome caused by the lung metastases and involvement of the pulmonary vessels by tumor thrombus. Administration of prednisolone to alleviate the diffuse alveolar damages including edematous changes of alveolar wall caused by the tumor cell infiltration and ischemia showed mild improvement in his symptoms and imaging findings. An autopsy showed the typical pattern of PTTM in the lung with multiple metastases.

PTTM is caused by tumor thrombi in the arteries and thickening of the pulmonary arterial endothelium leading to the symptoms of dyspnea in terminal staged patients. Therefore, supportive management of symptoms is necessary in the cases with PTTM and hence we believe that the information presented here is of great significance for the diagnosis and management of symptoms of PTTM with HCC.

Core tip: Pulmonary tumor thrombotic microangiopathy is caused by tumor thrombi in the arteries and thickening of the pulmonary arterial endothelium leading to the symptoms of dyspnea in terminal staged patients. Therefore, supportive management of symptoms is necessary in the cases with pulmonary tumor thrombotic microangiopathy, however, as the hepatic failure, bleeding, and encephalopathy have been focused in these cases with hepatocellular carcinoma and it is rare condition in the cases with hepatocellular carcinoma, only few cases have been reported. Therefore, we have reported the minute clinical and pathological information of our recent case and reviewed literatures of reported cases to date in this paper.

Various pathologic conditions, including diffuse alveolar lesions, lymphangiopathy, and pulmonary microembolism, are known causes of respiratory failure in cases of pulmonary malignancy[1]; however, these conditions are relatively rare in cases of hepatocellular carcinoma (HCC), possibly because HCC causes hepatic dysfunction and/or bleedings rather than respiratory dysfunction in the terminal stage. Therefore, pulmonary tumor microembolisms, including those of pulmonary tumor thrombotic microangiopathy (PTTM), are especially rare in HCC cases; and only a few cases have been reported, and the symptoms, imaging findings, therapeutic options, and prognoses have not been summarized to date. PTTM, first reported by von Herbay et al[2] in 1990, is a special cause of pulmonary tumor embolism in which tumor cells cause thickening of pulmonary arterial endothelium or form thrombi, which in turn cause narrowing and occlusion of the pulmonary arteries, resulting in pulmonary hypertension, dyspnea, and hypoxemia[3]. Our recent case with HCC who developed PTTM exhibited dyspnea with severe respiratory failure was diagnosed by minute histological analysis on autopsy and the information obtained was important to manage the symptoms in that stage. For a better understanding of the disease and management of symptoms, we have conducted a literature review of 18 reported cases[1,4-20] with our case.

A 72-year-old Japanese man was diagnosed with HCC and liver cirrhosis, caused by alcohol abuse, in 2011, and was referred to our hospital for therapeutic management. Since then, transcatheter arterial chemoembolization and radiofrequency ablation had been performed repeatedly, followed by the oral administration of sorafenib, 400 mg daily. After 1 year of sorafenib treatment, he was admitted to our hospital for dyspnea and low back pain. Computed tomographic (CT) scans revealed multiple HCC tumors in the liver (Figure 1A), as well as sacral bone metastases (Figure 1B) and multiple metastatic nodules in the lungs (Figure 1C) but no ascites.

On the sixth day after hospital admission, the patient’s respiratory condition worsened, and his blood gas analysis showed oxygen saturation (SpO2) of 91%, pH of 7.456, carbon dioxide tension of 35.2 mmHg, oxygen tension of 62.9 mmHg, bicarbonate level of 24.3 mmol/L, and BE of 0.7 mmol/L, with supplementation of 2 L/min of oxygen (Table 1, Figure 2). The chest radiograph showed a frosted glass-like shadow in the upper right lobe, middle lobe, and the lower left lobe (Figure 2). The blood and sputum cultures revealed no evidence of infectious pneumonia; however, respiratory distress and decreasing arterial blood oxygen saturation continued, and chest CT examination revealed worsening of the frosted glass-like shadow on day 8 (Figure 2). On the basis of these findings, and because antibiotics produced no response, we diagnosed his condition as acute respiratory distress syndrome, potentially a result of the lung metastasis and involvement of the pulmonary vessels by tumor thrombus. 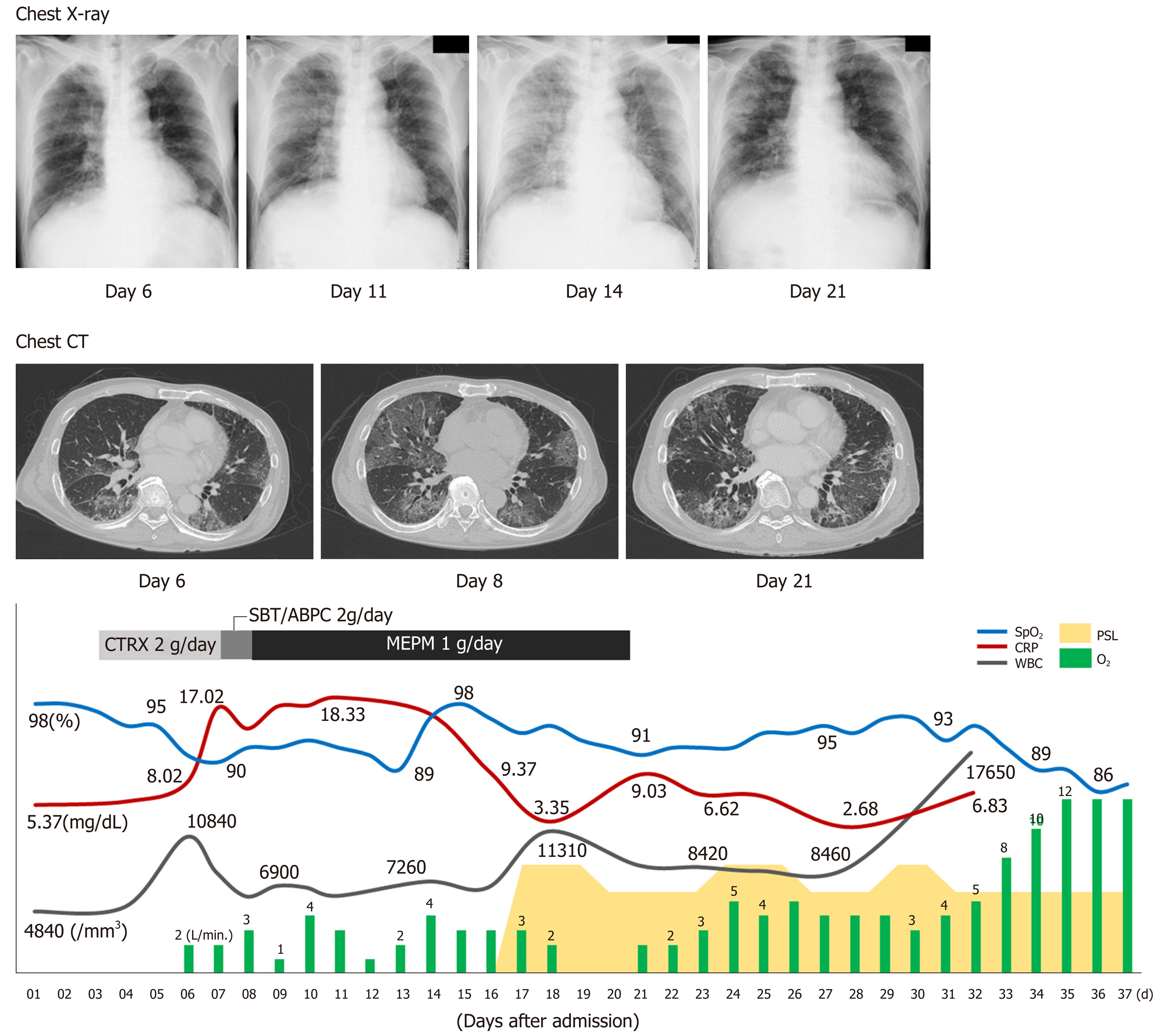 Chest radiographs showed worsening on day 14 (Figure 2). To alleviate the respiratory failure caused by the infiltration of the inflammatory cells and the reaction in the lung, we started oral administration of prednisolone, 80 mg daily, on day 16 after admission (Figure 2). The frosted glass-like shadow on chest radiographs and CT studies (Figure 2) showed temporary improvement and the symptom of dyspnea showed mild improvement; however, the patient’s respiratory condition and the data from the blood gas analysis did not improve with oxygen supplementation. The patient’s general condition worsened gradually and he died on the 37th day of hospitalization (Figure 2).

With the informed consent of the patient’s family, autopsy was performed to assess the cause of the respiratory failure and the frosted glass-like shadow. Macroscopically, the lung appeared to be hard and yellowish, and the presence of multiple tumors in the area was confirmed (Figure 3A). Microscopically, these tumors were confirmed to be metastases of HCC (Figure 3B), and multiple pulmonary artery tumor emboli with diffuse alveolar damages of detachment of alveolar epithelial cells, edematous changes of alveolar wall, accumulation of macrophages, and exudation of fibrinous tissue were seen (Figure 3C) and in part with recanalization in the tumor thrombus and the fibrocellular intimal proliferation (Figure 3D). In addition, medial thickening of the arterioles (Figure 3E) were seen and the tumor emboli (Figure 3F) were accompanied by CD31-positive endothelial cell growth (Figure 3G) with fibrocellular intimal proliferation (Figure 3H) which are the characteristics of PTTM. 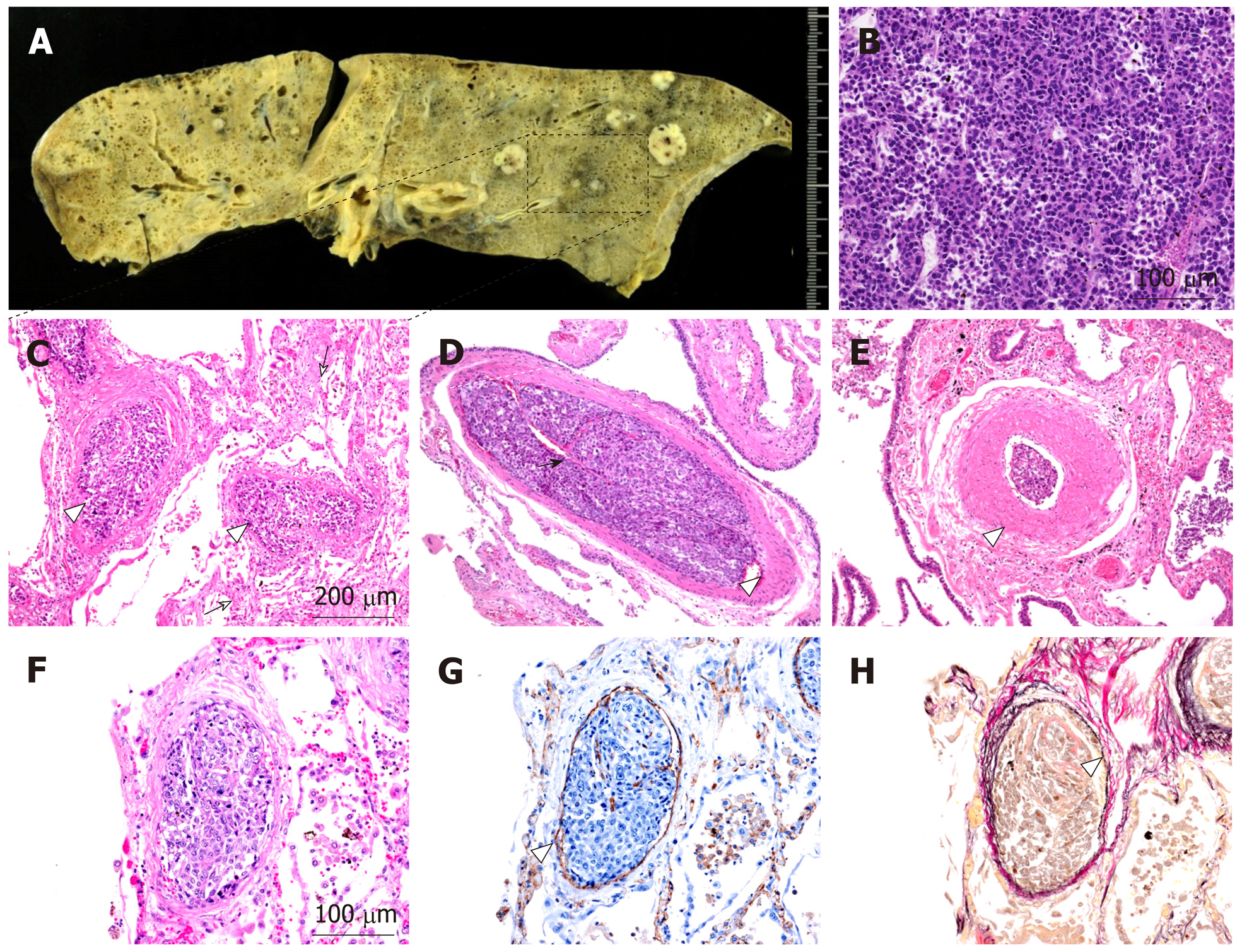 On the basis of these findings, the diagnosis was PTTM and diffuse pulmonary alveolar damage due to tumor emboli, which led to the cause of respiratory failure.

To alleviate the respiratory failure caused by the infiltration of the inflammatory cells and the reaction in the lung, we started oral administration of prednisolone, 80 mg daily, on day 16 after admission.

The patient’s general condition worsened gradually and he died on the 37th day of hospitalization.

In a report by Yamashita et al[3] who surveyed findings from autopsies of 2215 cases of malignant tumors, 30 cases (1.4%) were diagnosed with PTTM, and 21 of those cases exhibited hypercoagulability. Eighteen cases (60%) were with gastric cancers; the others include the carcinomas of the breast, pulmonary system, prostate, ovary, and pancreas. The most common histological type was glandular carcinoma, which was observed in 28 cases (93%). With regard to HCC as the primary lesion in cases of PTTM, only a few reports have been published to date, and the symptoms, imaging findings, therapeutic options, and prognoses have not been summarized; we performed a literature review of 18 reported cases and summarized the information with that of our case[1,4-20] (Table 2). According to our summary, the overall male-female ratio for all PTTM cases was 2:1, and of the 17 patients with PTTM that started as HCC, 15 (89%) were male (Table 2).

For the imaging findings of PTTM, pulmonary CT scans show consolidation which means an increase in absorption by the pulmonary parenchyma that obscures the background of blood vessels and the bronchial wall and the appearance of ground-glass attenuation, small nodules, and a tree-in-bud pattern. In our particular case, multiple small nodules appeared in the left inferior lobe; a decrease in SpO2 coincided with the increase in systemic inflammatory response syndrome score; and a chest radiograph showed ground-glass opacity over the area from the right superior lobe to the inferior lobe and over to the left inferior lobe. A chest CT scan taken at the same time showed ground-glass attenuation over both lungs. The summary of the reported cases showed various imaging including tumor nodular shadows, air bronchograms, enlargement of both the heart shadow and pulmonary arterial shadows, and ground-glass attenuation, therefore, there were no specific imaging findings directly suggesting the tumor embolism or pulmonary embolism. Because there is no typical pattern in imaging findings, it is difficult to diagnose PTTM while an affected patient is alive. As part of diagnosis, lung perfusion scintigraphy or cardiac ultrasonography is used to detect pulmonary hypertension[4]. In one report, cytodiagnosis was made with a specimen of pulmonary arterial blood taken with a Swan-Ganz’s catheter[21]; however, this method requires caution because the procedure is highly invasive and risky in patients with respiratory distress. In that report, the patient received a definitive diagnosis but died 4 d later. Among the cases in the literature, definitive diagnosis was obtained through autopsy in 13 cases, lung perfusion scintigraphy in 2 cases, cardiac ultrasonography in 2 cases and recovery of embolus in 1 case. The pathological findings have not been described minutely, and our patient showed not only the tumor embolisms, the thickening of vascular endothelium and fiber were confirmed which are suggesting the histological features of PTTM.

For therapeutic options, as far as we could confirm, all patients with respiratory distress were administered oxygen, and additional treatments included antibiotics in two cases, one case of gabexate mesilate infusion in one case, and antithrombotic urokinase therapy in two cases. No effective therapeutic options have been established for PTTM at this stage. We used prednisolone infusion with the purpose of alleviating respiratory distress and improving the patient’s deteriorating systemic condition, and the mild improvement of the symptom with the reduction of the ground-grass opacity in chest radiographs and CT scans were seen, however, no data of the respiratory distress and the necessary oxygen volume did not decrease. Based on the literature review, steroids were administered to three patients, and one of them showed the improvement of the images (Table 2). The prognosis for patients with PTTM is extremely poor; most of such patients die within 1 week of developing respiratory distress[22]. Among the cases featured in our literature review, only one patient survived. The shortest period between the commencement of treatment for respiratory distress and death was 0, the longest was 330 d, the average was 41 d, and the median was 9 d. PTTM is difficult to diagnose with general imaging tools, and a poor prognostic conditions with malignant tumors, therefore, the supportive care to reduce the symptoms by prednisolone, opioid, and etc. should be considered for the better terminal care.

Our summary demonstrated the poor prognosis of the PTTM of HCC and supportive care using oxygen, prednisolone, opioid, etc. might be effective to reduce the symptoms. Further accumulation of information from cases will be of great help for physicians diagnose, manage, and care the patients and their symptoms.