Helicobacter pylori (H. pylori) infection is the principal cause of peptic ulcer disease, mucosa-associated lymphoid tissue lymphoma, and gastric adenocarcinoma. H. pylori eradication cures or prevents these diseases[1]. However, H. pylori is becoming resistant to previously efficacious antibiotic regimens[2]. Clarithromycin resistance is increasing worldwide[2-4]. The eradication rate afforded by legacy triple therapy (LTT) (the historical first-line treatment for H. pylori infection; LTT includes clarithromycin) has declined over the past decade, and has decreased to near 80% or below in some countries of Asia and Europe[2-4]. Dual clarithromycin-/metronidazole-resistance of H. pylori is also of concern worldwide[5]. In South Korea, the dual resistance rate is 9.6%, and it is 19% [95% confidence interval (CI): 0%–39%] in the Eastern Mediterranean Region[5,6].

Thus, many studies have explored the efficacy of first-line alternatives to LTT; these include bismuth quadruple therapy (BQT) and concomitant therapy (CT)[7-13], which feature in the current guidelines[2,14-16]. The Maastricht V consensus concluded that, in areas exhibiting high-level (> 15%) clarithromycin resistance but low-level dual clarithromycin/metronidazole resistance (< 15%), BQT or CT should be recommended. In areas exhibiting high-level dual clarithromycin/metronidazole resistance (> 15%), BQT is the recommended first-line treatment (level of evidence: Low; grade and recommendation: High)[2]. The revised guidelines for the diagnosis and treatment of H. pylori infection in Korea recommend the use of bismuth-containing quadruple therapy (BCQT) if clarithromycin resistance is suspected[16]. A meta-analysis found that the eradication rate afforded by CT was slightly higher than that of sequential therapy (ST) [pooled odds ratio (OR) = 1.382, P = 0.03, intention-to-treat (ITT) analysis; 2.102, P = 0.001, per-protocol (PP) analysis][10]. However, only a few reports on the efficacy of BCQT and CT have appeared; direct comparisons are rare. Therefore, we performed a prospective, randomized controlled study comparing modified BCQT (mBCQT) and CT as potential first-line treatments for H. pylori infection.

We performed a prospective, open-label, randomized controlled trial in a single tertiary medical center. Patients who underwent endoscopy between February 2016 and August 2017 at Gachon University Gil Hospital, and who received first-of-life diagnoses of peptic ulcer disease, gastritis, gastric polyps, or early gastric cancer, and who then underwent endoscopic mucosal resection, were initially included.

Sample size calculations were performed before the trial began. We assumed, based on previous studies, that the eradication rate of CT was 90%. With little data on BCQT, we assumed an eradication rate of 85% and calculated that a sample size of 60 patients in each of the two groups was necessary (α = 0.05, power 80%, non-inferiority limit of -10%-10%). The actual sample size was increased to 136 patients to account for patient drop-out.

Of these patients, 136 with confirmed H. pylori infections [at least two positive results on either or both of a histological test (Giemsa staining) and the rapid urease test] were enrolled. The 136 patients were randomly divided into two 68-patient groups using a computer-generated block randomization table; the groups received 2-wk treatments with either mBCQT or CT.

The 13C-urea breath test was performed at 6 wk to 8 wk after antibiotic suspension.

The primary outcome was the eradication rate of H. pylori, as determined by ITT and PP analysis. The secondary outcomes were adverse events and compliance.

The study was approved by the Clinical Research Ethics Committee of Gachon University Gil Hospital (approval No. GCIRB2016-006). Written informed consent was obtained from all patients enrolled in the study.

Inadequate drug compliance was defined as ingestion of less than 90% of the total recommended dose. Adverse effects were defined as unexpected symptoms that developed between the commencement and 4 wk after completion of treatment.

The 13C-urea breath test (UBiT-IR 300/13C-Urea breath test system; Otsuka, Tokyo, Japan) was performed no earlier than 4 wk after treatment concluded, at which time no patient had taken proton pump inhibitors for at least 2 wk. Eradication failure was defined as a positive (delta 2.5) breath test.

IBM SPSS statistical software (ver. 22.0; IBM Corp, Armonk, NY, United States) was used for all analyses. We employed the χ2 test to compare discrete variables and the independent t-test to compare continuous variables. We ensured that our sample size had a sufficient non-inferiority margin. 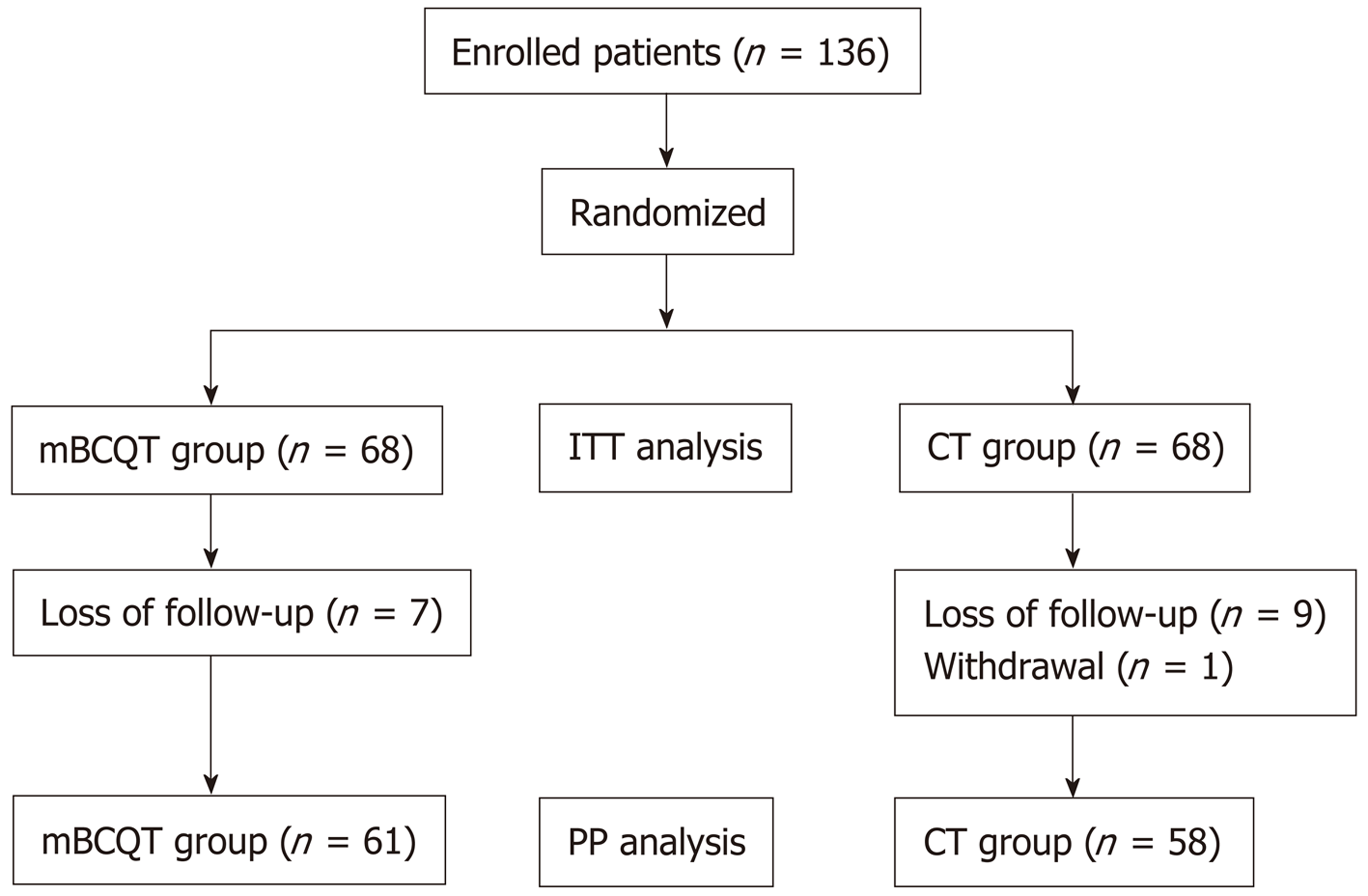 Both mBCQT and CT proved to be useful empirical first-line treatment options for H. pylori eradication. In an area exhibiting high-level clarithromycin resistance (> 15%), both regimens were effective on ITT analysis (mBCQT, 88.2%; CT, 79.4%; P = 0.162) and PP analysis (mBCQT, 98.4%; CT, 93.1%; P = 0.199)[16,17]. mBCQT was somewhat, but not significantly, better than CT, by about 8% on ITT analysis and 5% on PP analysis. A large randomized trial performed in Taiwan reported similar results. The cited work used culture to identify clarithromycin-susceptible and -resistant strains, and predicted the efficacy of various drug regimens accordingly. The predicted efficacy of 10-d BQT was greater than that of 10-d CT and 14-d LTT in regions exhibiting high-level clarithromycin resistance, as revealed by multivariate analysis. Similarly, CT was more effective than LTT[8]. A prospective study performed in Spain yielded results similar to ours; 10-d BQT (using capsules) and 14-d CT, employed as first-line eradication treatments in an area of high-level clarithromycin resistance, were equally effective[12]. A South Korean study found that 10-d PAM-B therapy (rabeprazole 20 mg, amoxicillin 1 g, metronidazole 750 mg, and tripotassium dicitratobismuthate 600 mg twice daily) compared favorably with 14-d CT. The eradication rate of CT was similar to that of the present study, but the PAM-B eradication rate could not be directly compared to the CT data because the regimens differed markedly (ITT analysis, 88.1% vs 83.0%, P = 0.299; PP analysis, 96.6% vs 95.5%, P = 0.743). The incidence of adverse events was lower than that in our study (23.0% vs 25.2%, P = 0.776), perhaps because the duration of 10-d CT of the cited study was shorter than that of our CT[13]. The effects of treatment duration on eradication rates and side effects should be studied in future. Both of our regimens featured multiple drugs; compliance remains an issue, but the relatively high eradication rates may reflect good compliance[18]. Our mBCQT regimen featured twice-daily dosing, unlike previous studies. Dore et al[19] reported that daily two- or four-dose second-line regimens afforded similar eradication rates.

Also, our mBCQT regimen used a higher dose of tetracycline than other regimens (1000 mg twice daily). A previous Korean study revealed that the extent of tetracycline resistance was relatively low (minimal inhibitory concentration ≥ 2.0 mg/mL, 0%–3.3% of isolates), perhaps attributable to a reduction in tetracycline prescriptions when medical practice and pharmaceutical dispensing were separated in 2000[6,20,21]. The tetracycline resistance rate was 0.7% in Spain, 0.5% in the United Kingdom, and 0.5% in Hong Kong; in many countries, the rate was 0%[22]. Some studies have explored the efficacy of tetracycline-/amoxicillin-containing regimens. A Korean study comparing a 10-d ST and 14-d PBAT regimen (40 mg pantoprazole, 600 mg bismuth subcitrate, 1 g tetracycline, and 1 g amoxicillin, twice a day) found that ST seemed to be more effective; however, neither regimen afforded ‘excellent’ eradication (over 90%)[23]. A Taiwanese study found that quadruple therapy featuring tetracycline and amoxicillin effectively rescued patients in whom triple therapy failed (78% rescue on ITT analysis and 89% on PP analysis). However, apart from our mBCQT regimen, ST featuring tetracycline was associated with relatively low-level eradication[24]. These variable results may reflect the fact that both tetracycline and amoxicillin are not very active against H. pylori, or that the drugs may act antagonistically[23]. In most studies, tetracycline was taken four times daily, but twice-daily regimens are more appropriate and probably also improve compliance; tetracycline is a time-dependent (half-life, 8–10 h) antibiotic agent exhibiting a long post-antibiotic effect. Further studies are needed to explore the adequacy of currently used tetracycline dosages and durations[23].

Although both regimens seemed to be effective first-line therapies, their efficacy in terms of salvage therapy have not been confirmed. The Maastricht V guidelines indicate that, after failure of non-BQT, levofloxacin triple therapy is appropriate[2]. However, according to the World Health Organization, quinolone resistance has been reported in over 30% of all regions, and primary levofloxacin resistance in over 15%, except Europe[5,20,22]. Therefore, it is necessary to consider rescue regimens containing drugs associated with low H. pylori resistance rates.

One study of rifabutin-based therapy reported an eradication rate over 70% (72.7%, 95%CI: 67.3%–77.7%, PP analysis; 71.5%, 95%CI: 66.1%–76.5%, ITT analysis)[27]. Although rifabutin-resistant H. pylori has been reported, rifabutin-based regimens may be useful as rescue therapies because rifabutin can be used without culture and antibiotic susceptibility testing[27]. Also, furazolidone-resistant H. pylori is rare; the drug afforded satisfactory eradication rates (relative risk = 1.17, 95%CI: 1.05–1.31)[28]. In a multivariate analysis, an increased eradication rate when using high-dose furazolidone was noted (OR = 1.5, 95%CI: 1.3-2.7; P < 0.001)[29]. According to a recent in vitro analysis, there were no strains resistant to rifabutin or furazolidone among multi-drug resistant H. pylori (minimum inhibitory concentration < 0.008 and < 0.5 μg/mL, respectively). This suggests that rifabutin- and furazolidone-containing regimens have promise as rescue therapies[30]. However, there is controversy over the use of furazolidone-containing regimens because of the drug’s potential carcinogenicity. Thus, furazolidone-containing regimens are recommended only in areas with high rates of resistance and for patients who have multiple prior treatment failures and have received patient counseling[29,31].

The limitations of this study included the small number of patients, due to the single-center design. Also, we did not culture H. pylori. The strengths of our study include its randomized controlled design and the acceptable therapeutic efficacy in both the mBCQT and CT groups. In conclusion, both mBCQT and CT are promising empirical first-line regimens in an area exhibiting high-level clarithromycin resistance. However, mBCQT is somewhat preferable, considering both side effects and compliance. A large-scale prospective study is required to validate our findings.

Helicobacter pylori (H. pylori) is becoming resistant to previously efficacious antibiotic regimens, including clarithromycin. The eradication rate afforded by legacy triple therapy (LTT), which includes clarithromycin, has declined over the past decade.

Many studies have explored the efficacy of first-line alternatives to LTT. However, only a few studies on the efficacy of bismuth-containing quadruple therapy (BCQT) and concomitant therapy (CT) have been conducted.

To determine the eradication rates of H. pylori and compare adverse events and compliance in groups of patients who received modified BCQT (mBCQT) and CT regimens.

Both mBCQT and CT proved to be useful empirical first-line treatment options for H. pylori eradication in an area exhibiting high-level clarithromycin resistance

A large-scale prospective study is required to validate mBCQT and CT as empirical first-line treatment options for H. pylori eradication. The effects of treatment duration on eradication rates and side effects should be studied in future.