The digestive tract is the maximal immunizing tissue in the body, and mucosal integrity and functional status of the gut is very important to maintain a healthy organism. Severe infection is one of the most common causes of gastrointestinal dysfunction, and the pathogenesis is closely related to endotoxemia and intestinal barrier injury. Bifidobacterium is one of the main probiotics in the human body that is involved in digestion, absorption, metabolism, nutrition, and immunity. Bifidobacterium plays an important role in maintaining the intestinal mucosal barrier integrity. This study investigated the protective mechanism of Bifidobacterium during ileal injury in rats.

To investigate the effects of Bifidobacterium on cytokine-induced neutrophil chemoattractant (CINC) and insulin-like growth factor 1 (IGF-1) in the ileum of rats with endotoxin injury.

Severe infection is one of the most common causes of gastrointestinal dysfunction, and the pathogenesis is closely related to endotoxemia and intestinal barrier injury. Bifidobacterium is one of the main probiotics in the human body involved in digestion, absorption, metabolism, nutrition, and immunity to infection. In particular, Bifidobacterium plays an important role in maintaining intestinal mucosal barrier integrity[1]. Insulin-like growth factor 1 (IGF-1) is a polypeptide that is primarily secreted from the liver, but it is also expressed in other organs such as the intestine, making it part of the intestinal immune barrier[2]. This study investigated the protective mechanism of Bifidobacterium through ileal injury in preweaning rats.

Healthy 18-day-old preweaning Wistar rats (31.16 ± 6.38 g) were provided by the Laboratory Animal Center of the Second Affiliated Hospital of Harbin Medical University. The rats were randomly divided into three groups: Control (group C), model (group E) and Bifidobacterium treatment (group T). The animals were sacrificed 2, 6 and 12 h after intraperitoneal injection of endotoxin (LPS) or normal saline, and ileal samples were collected. Each group had eight preweaning rats for each time point. Animals that died during the experiment were not included.

Activation of freeze-dried strains: Before activation, cryopreserved strains were placed at room temperature for several hours. The ampoule was wiped with 70% alcohol in a sterile room, opened, and 0.2 mL TPY medium was added. The strains taken by sterilized platinum earrings were inoculated into TPY medium and onto agar plates. After anaerobic incubation for 48-72 h at 37 °C, three generations were continuously activated to enhance the viability of the strains.

Morphological observation: Platinum earrings were used to remove bacteria from a single colony or liquid culture and then smeared onto a microscope slide for Gram staining. The bacterial morphology was observed under the microscope. Generation of strains: After microscopic examination, strains with good morphology and no bacterial colonies in the solid medium were selected, and lines were drawn on TPY solid medium. At the same time, TPY liquid medium was added to bacteria to culture anaerobically at 37 °C for 48-72 h.

Measurement of viable bacteria: The 0.5 mL suspension was gradiently diluted 10 times with sterilized normal saline. The 0.2 mL suspension of the appropriate dilution gradient was extracted and placed on the TPY agar plate two or three times for each dilution gradient, and the suspension was uniformly spread out using a sterilized rod. After ventilation in the corridor of the anaerobic incubator, the suspension was transferred to an incubator for anaerobic cultivation at 37 °C for 48 h. Finally, bacterial colonies were counted after the strains were grown.

Rats in groups E and T were intraperitoneally injected with 5 mg/kg LPS (5 mg/mL dissolved in normal saline). In group T, 0.5 mL Bifidobacterium suspension (2.0 × 109 CFU/mL) was administered intragastrically twice daily 1 wk before LPS, until the end of the experiment. In group C, 1 mL/kg normal saline was intraperitoneally injected. The preweaning rats in each group were returned to their cage after treatment and continued to receive rat’s milk.

For total RNA extraction, ileal tissues preserved at –80 °C were ground in liquid nitrogen under aseptic conditions, then poured into an Eppendorf tube. TRIzol Reagent (50-200 mg tissue/mL TRIzol) was added to the ileal tissues for 5 min at room temperature to facilitate dissociation of nucleic acid–protein complexes. Protein and DNA were removed by addition of 0.2 mL chloroform, and the supernatant was extracted by rapid vibration and centrifugation at 12000 rpm at 4 °C for 15 min.

For semi-quantitative analysis of PCR products, PCR reaction products (3-5 μL) were mixed with ethidium bromide and subjected to 2% agarose gel electrophoresis. The PCR products were quantified by ImageJ analysis, and β-actin was the internal reference for RNA detection. The relative expression of genes = optical density of tested genes/intrinsic optical density. 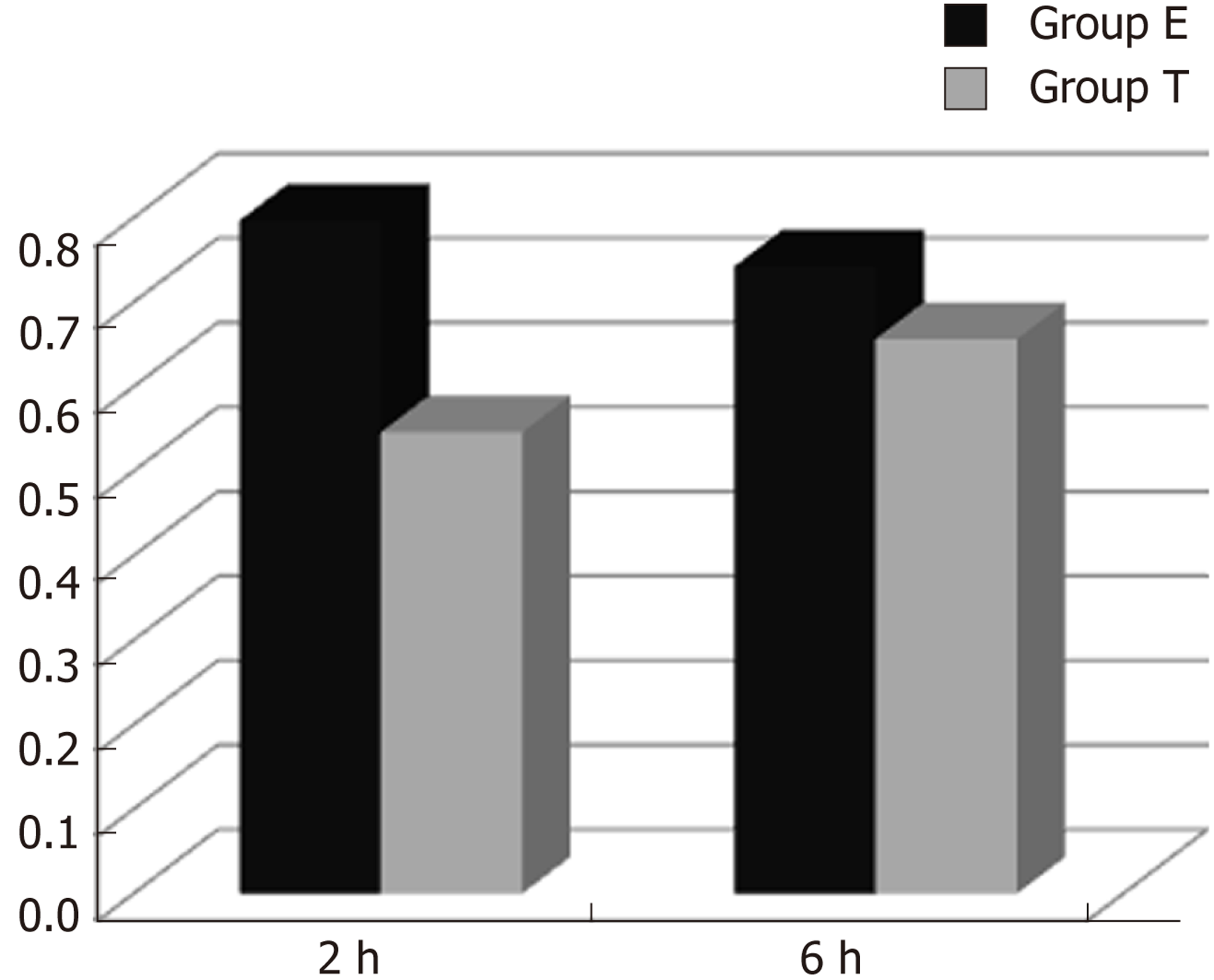 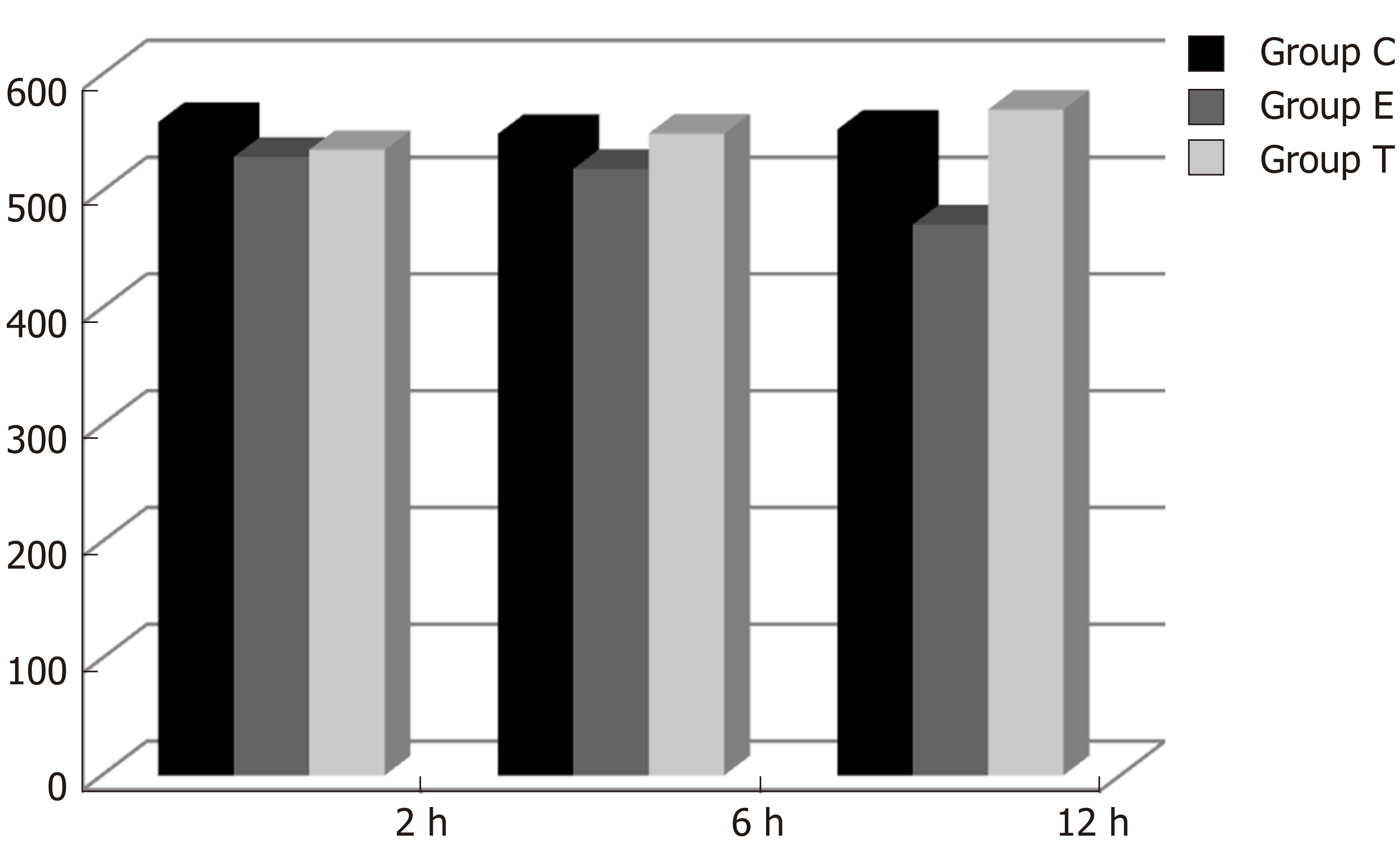 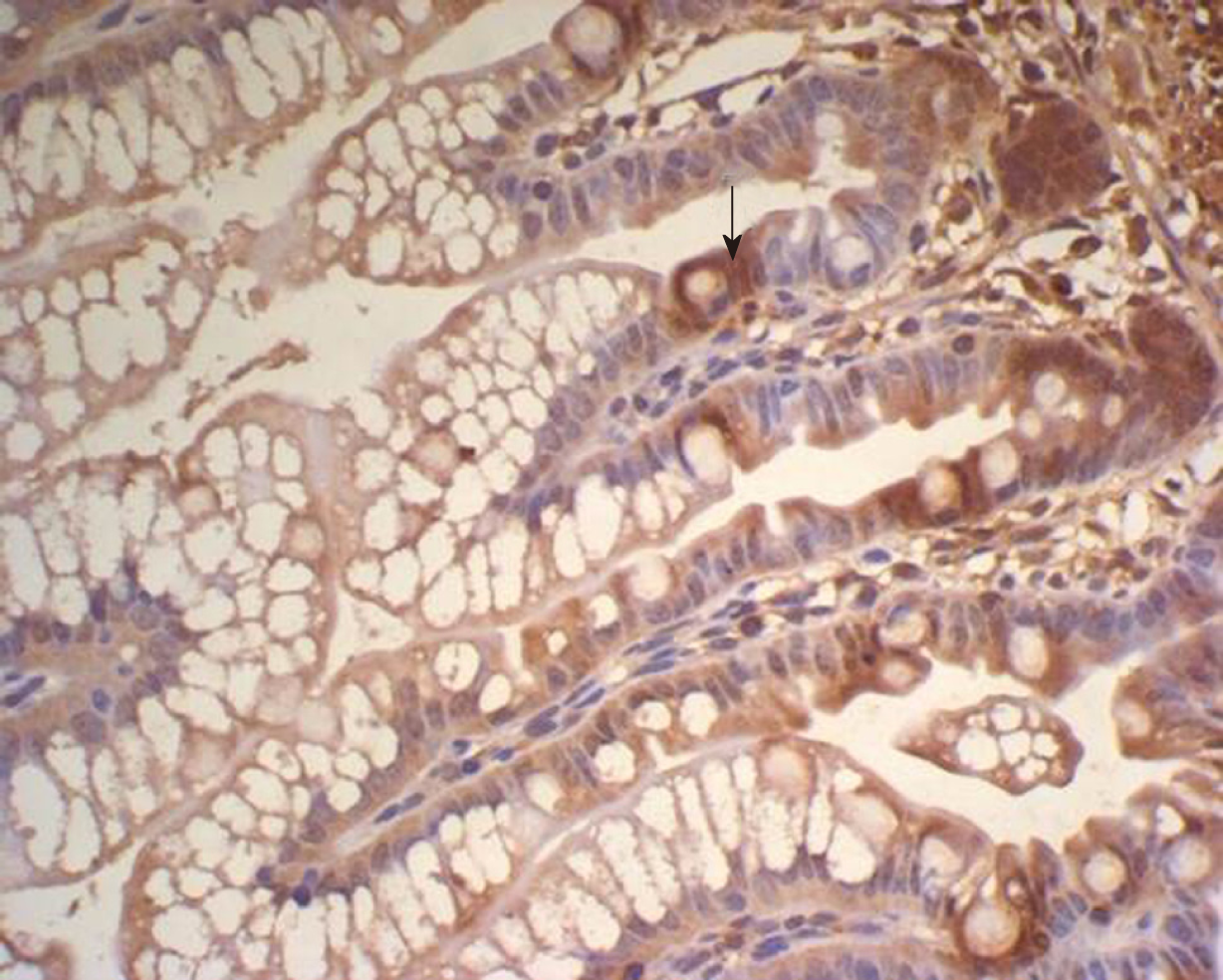 Figure 4 Insulin-like growth factor 1 expression in the ileum of group C, showing a large number of brown granules in the intestinal crypt and epithelial cells (× 400). 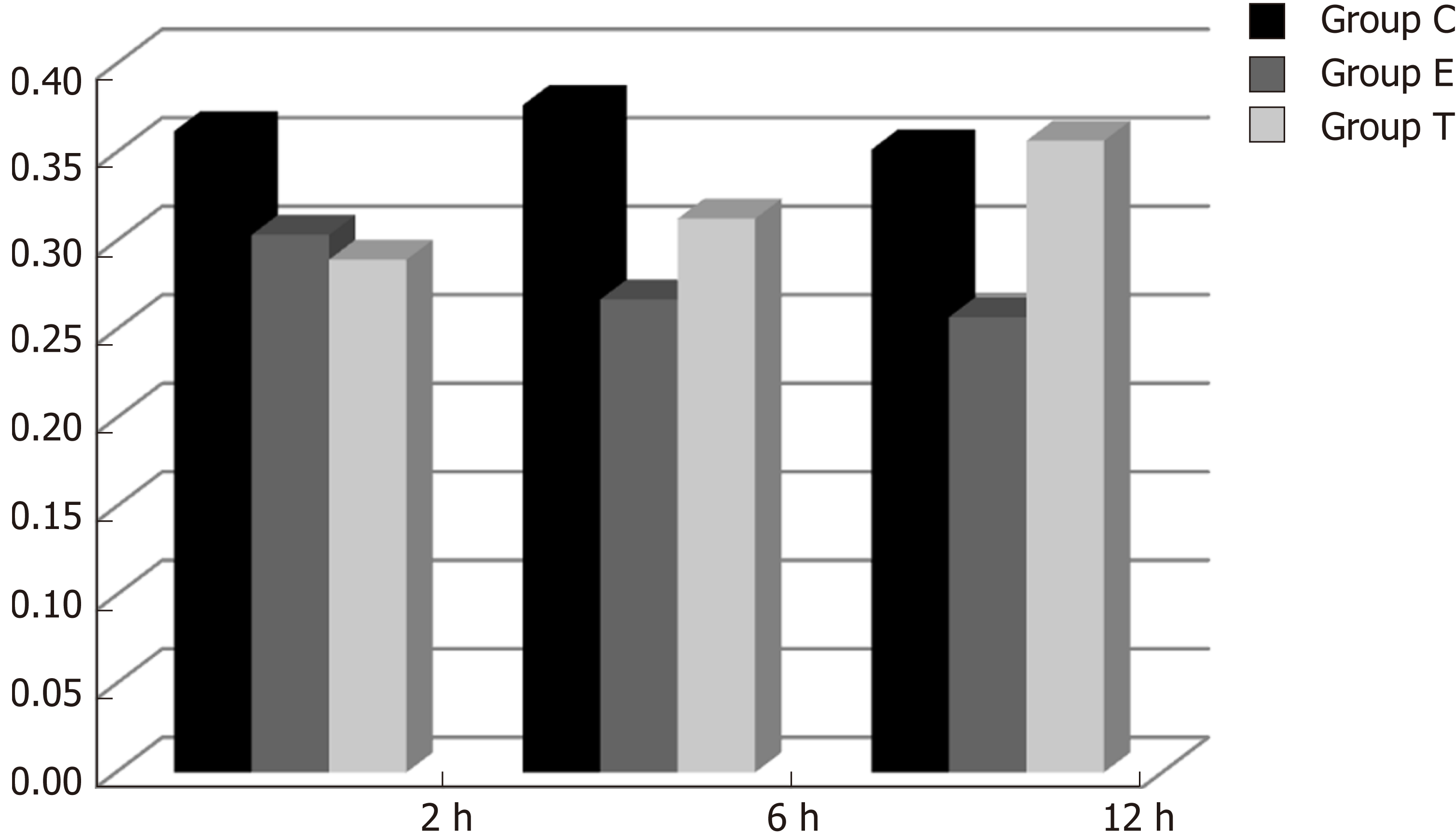 In inflammatory reactions, neutrophils in the blood must be activated after entering tissue spaces through capillary walls, where they then exert their biological effects. Neutrophil chemotaxis is mediated by CINC, a murine chemotactic cytokine similar to human interleukin-8. CINC-1 expression is increased in rat models of ulcerative colitis[18], intestinal and lung ischemia/reperfusion models and endotoxin injury models[19,20]. CINC-1 expression in the lung tissue of rats is increased by endotoxin[20,21] and chronic intermittent hypoxia[22].

IGF-1 is a multifunctional cellular regulatory factor that is mainly secreted by the liver. Thus, the liver is the main source of circulating IGF-1, but IGF-1 is also ex-pressed in other tissues including the intestine, condylar cartilage cells in rats[23], T lymphocytes in mice dendritic epithelia[24], brain tissue of rats[25,26], placenta of pregnant mice[27-29], and colonic smooth muscle cells in diabetic rats[27]. IGF-1 plays a role in cell growth[30-32], differentiation[33,34] and metabolism[35]. One recent study focused on continuous IGF-1 expression in the intestine in a rat model of short bowel syndrome[36]. Other studies have shown that exogenous IGF-1 improved intestinal barrier function in rats with cirrhosis[37] or acute necrotizing pancreatitis[38], where survival rates have been significantly improved by minimal invasive interventions[39-43]. How IGF-1 is expressed during intestinal infection and how Bifidobacterium affects that expression have not been reported.

In this study, IGF-1 protein and mRNA expression in the ileum decreased after intraperitoneal injection of endotoxin, as reported previously[44]. Intragastric administration of Bifidobacterium increased IGF-1 protein and mRNA expression, indicating that IGF-1 plays an important role in the recovery of ileal mucosal damage. Bifidobacterium may enhance the immunological barrier function of the intestine by inhibiting local inflammatory responses and increasing IGF-1 expression.

Severe infection is one of the most common causes of gastrointestinal dysfunction, and its pathogenesis is closely related to endotoxemia and intestinal barrier injury.

Bifidobacterium plays an important role in maintaining the integrity of the intestinal mucosal barrier.

This study investigated the protective mechanism of Bifidobacterium during ileal injury in rats.

This study can provide a new therapeutic tool and theoretical support for gastrointestinal dys-function.