Pancreatic cancer is one of the leading causes of cancer death worldwide. Adjuvant chemotherapy has been developed based on the experiences made with palliative chemotherapy, and advocated to improve long-term survival of patients with this disease. However, the optimal chemotherapeutic regimen remains controversial. Recently, Conroy et al demonstrated the impressive benefits of modified FOLFIRINOX over gemcitabine alone in the multicenter Partenariat de Recherche en Oncologie Digestive 24 (PRODIGE-24) trial. The remarkable results mark a new milestone in treating resectable pancreatic cancer and have now changed the standard of care for this patient population. In this commentary, we discuss an issue of difference of tumor grade between the PRODIGE-24 trial and previous phase III trials. We also discuss potential biomarkers predicting therapeutic response to modified FOLFIRINOX. Finally, we summarize several ongoing clinical trials of replacing part of the FOLFIRINOX regimen with Xeloda/S-1/nanoliposomal irinotecan for pancreatic cancer.

Core tip: Adjuvant chemotherapy for pancreatic cancer has been developed based on the experiences made with palliative chemotherapy. Nevertheless, the optimal regimen remains controversial. The Partenariat de Recherche en Oncologie Digestive 24 trial showed an impressive benefit of modified FOLFIRINOX over gemcitabine alone. The remarkable results mark a new milestone in treating resectable pancreatic cancer and have now changed the standard of care. Here, we discuss an issue of difference between this trial and previous phase III trials, as well as potential biomarkers predicting therapeutic response. Several ongoing trials of replacing part of the FOLFIRINOX regimen with other drugs for pancreatic cancer are also summarized.

We have read with great interest the recent article by Conroy et al[1] comparing the efficacy and safety of a modified FOLFIRINOX (oxaliplatin 85 mg/m2, leucovorin 400 mg/m2, irinotecan 150 mg/m2, and continuous fluorouracil 2400 mg/m2; without bolus fluorouracil; every 2 wk for 12 cycles) regimen with gemcitabine as adjuvant therapy for resected pancreatic cancer, and would strongly recommend it to the readers.

Pancreatic cancer is one of the leading causes of cancer death in both the United States and China[2,3]. The improvement of long-term prognosis of this disease is attributed to the decrease of perioperative mortality[4,5] and the increase of adjuvant treatment rate[6]. Adjuvant chemotherapy has been developed based on the experiences made with palliative chemotherapy, and advocated to reduce recurrence and improve survival after surgery[7]. The European Study Group for Pancreatic Cancer 1 (ESPAC-1) trial revealed a superior median survival with chemotherapy (bolus fluorouracil 425 mg/m2 plus leucovorin 20 mg/m2 days 1-5, every 4 wk for six cycles) as compared with no chemotherapy [20.1 mo vs 15.5 mo; hazard ratio (HR) for death = 0.71; 95% confidence interval (CI): 0.55-0.92; P = 0.009][8]. The Charité Onkologi 001 (CONKO-001) trial showed a significantly prolonged disease-free survival in the gemcitabine group (1000 mg/m2 days 1, 8, and 15, every 4 wk for six cycles) compared to the observation group (13.4 mo vs 6.9 mo, P < 0.001), but a modest overall survival benefit (22.1 mo vs 20.2 mo, P = 0.06)[9]. The ESPAC-3 trial subsequently showed an absence of overall survival difference between adjuvant gemcitabine and fluorouracil plus folinic acid (23.6 mo vs 23 mo, P = 0.39) in patients with resected pancreatic cancer[10]. With the goal to further prolong postoperative survival, gemcitabine-based combination chemotherapies were evaluated in subsequent trials, such as the ESPAC-4[11] and CONKO-005 trials[12]. However, the optimal chemotherapeutic regimen remains controversial.

In the Partenariat de Recherche en Oncologie Digestive 24 (PRODIGE-24) trial[1], 493 patients from 77 centers in France and Canada were randomly assigned to receive a modified FOLFIRINOX regimen or gemcitabine for 24 wk. Patients 18 to 79 years of age who had undergone R0 (absence of tumor cells within 1 mm of all resection margins) or R1 (presence of tumor cells within 1 mm of one or more resection margins) resection within 3 to 12 wk before randomization, and who had a serum CA 19-9 level ≤ 180 U/mL were eligible for inclusion. At a median follow-up of 33.6 mo, there was an impressive difference of 18.3% in the disease-free 3-year survival rate (39.7% in the modified FOLFIRINOX group vs 21.4% in the gemcitabine group). The median disease-free survival with the modified FOLFIRINOX regimen was 21.6 mo and with gemcitabine 12.8 mo (stratified HR for cancer-related event, second cancer, or death = 0.58; 95%CI: 0.46-0.73; P < 0.001). The median overall survival was 54.4 mo in the modified FOLFIRINOX group vs 35.0 mo in the gemcitabine group (stratified HR for death = 0.64; 95%CI: 0.48-0.86; P = 0.003). Compared with previous phase III trials[9-13], the PRODIGE-24 trial showed a much longer median overall survival in the gemcitabine group (Figure 1), which the authors attributed to the high use of FOLFIRINOX and other active regimens after tumor relapse. Kindler[14] considered that the similarity of the disease-free survival in the gemcitabine group throughout these trials argued against selection bias. However, we propose that the difference of tumor grade among these trials should not be neglected (Table 1). Tumor grade has been revealed as an independent prognostic factor for overall survival[10,15]. The higher proportion of well-differentiated tumors might account for the improved survival of the gemcitabine group in the PRODIGE-24 trial. 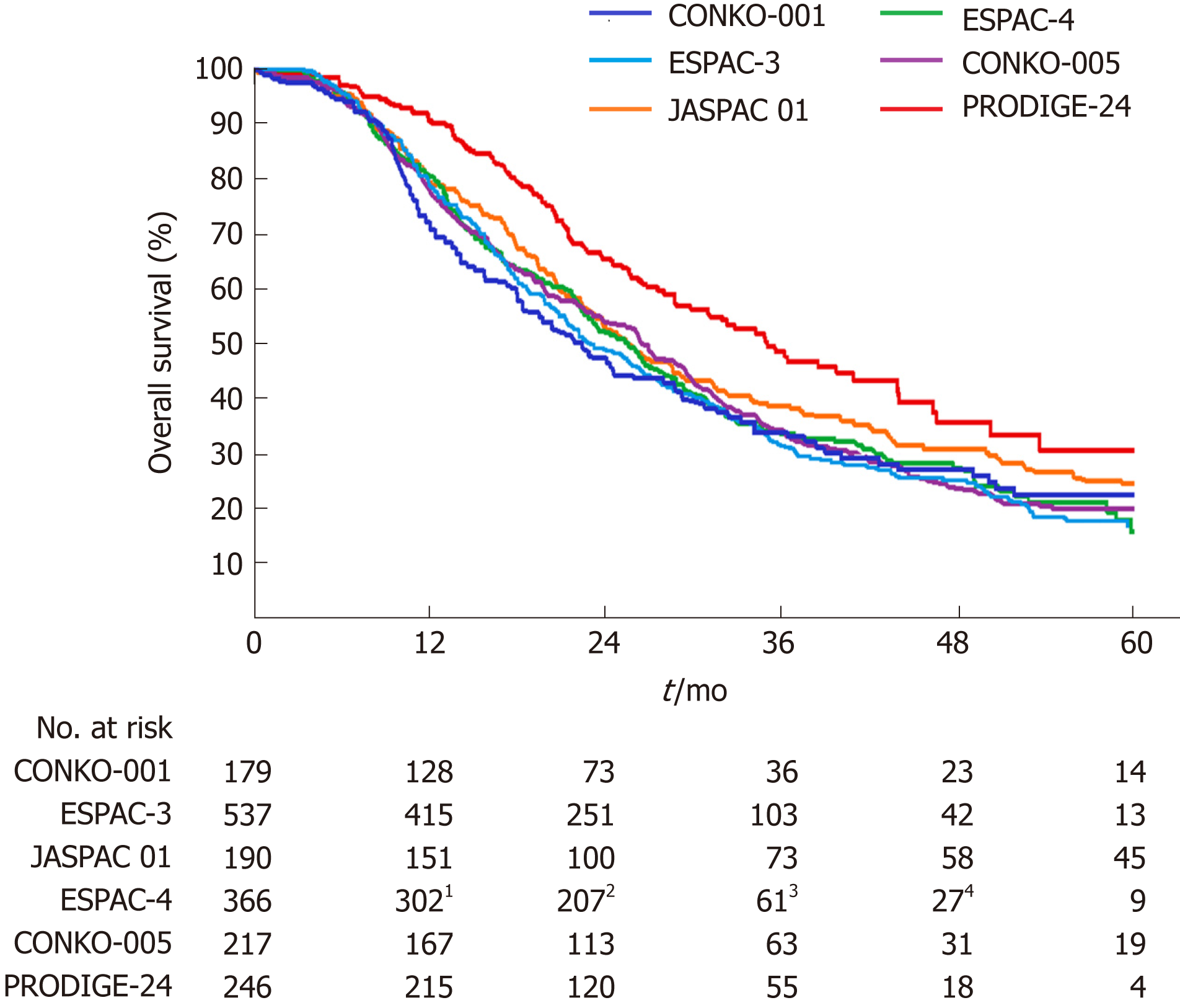 The remarkable results of the PRODIGE-24 trial mark a new milestone in treating resectable pancreatic cancer and open a world of possible investigations. Can we further improve survivals by using modified FOLFIRINOX as neoadjuvant chemotherapy? What is the effect of this regimen combined with radiotherapy? Additionally, can we improve the safety and/or efficacy by replacing 5-FU and leucovorin in the FOLFIRINOX regimen with capecitabine (Xeloda) or oral S-1? The triple combination chemotherapy of S-1, oxaliplatin, and irinotecan (SOXIRI) appeared to be a promising and well-tolerated regimen in patients with unresectable pancreatic ductal adenocarcinoma[26,27]. Several phase I and II trials of these particular combinations have been conducted across various stages of pancreatic cancer (Table 2). Lastly, given the theoretical benefits of developing nano-formulations of anti-cancer drugs for cancers[28,29], the applicability of novel agents needs to be evaluated in pancreatic cancer. For example, the proven efficacy of nanoliposomal irinotecan (nal-IRI) in metastatic pancreatic cancer[30,31] has triggered enthusiasm in substituting nal-IRI for standard irinotecan as part of the FOLFIRINOX regimen (Table 2). We look forward to the results of this triple-drug combination regimen in patients with pancreatic cancer.

Neoadjuvant treatment with FOLFIRINOX or gemcitabine plus nab-paclitaxel has become a standard of care for borderline or locally advanced pancreatic cancer[33,34], and is now increasingly considered even for up-front resectable disease[35-38]. Due to its growing preference over either postoperative chemotherapy regimen, a neoadjuvant approach is advocated when there is the option in order to improve the success of complete tumor resection and for potential control of micrometastases. Studies now in progress will be critical not only to assess the long-term outcomes of current neoadjuvant regimens but also to investigate the added efficacy of anti-stromal agents such as losartan, immunotherapy, radiation therapy, and biomarkers reflecting the response to treatment.