Emergency surgical resection is a standard treatment for right-sided malignant colonic obstruction; however, the procedure is associated with high rates of mortality and morbidity. Although a bridge to surgery can be created to obviate the need for emergency surgery, its effects on long-term outcomes and the most practical management strategies for right-sided malignant colonic obstruction remain unclear.

Forty patients with right-sided malignant colonic obstruction who underwent curative resection from January 2007 to April 2017 were included in the study. We compared the perioperative and long-term outcomes of patients who received bridges to surgery established using decompression tubes and those created using self-expandable metallic stents (SEMS). The primary outcome was the overall survival duration (OS) and the secondary endpoints were the disease-free survival (DFS) duration and the preoperative and postoperative morbidity rates. Analysis was performed on an intention-to-treat basis.

The bridge to surgery using trans-nasal and trans-anal decompression tubes for right-sided malignant colonic obstruction is safe and may improve long-term outcomes.

Core tip: Patients with malignant colonic obstructions typically undergo emergency surgery, which is associated with high rates of mortality and morbidity. To overcome this, bridges to surgery have been proposed, but their efficacy in patients with right-sided malignant colonic obstructions remains unclear, mainly because obstructions are less common in patients with right- than left-sided colon cancer. We compared two bridges to surgery: Decompression tubes and self-expandable metallic stents. The short-term outcomes of the two groups did not differ, but the overall survival and disease-free survival rates were better in the former patients, suggesting that decompression tube placement may be optimal.

Colorectal cancer is highly prevalent, and increasing in incidence in many developed countries. Of patients with colorectal cancer, 8%-16% present to emergency departments with bowel obstruction[1-3]. A large proportion of patients with malignant colonic obstruction have left-sided colon cancer, in which the incidence of obstruction is reportedly higher than that in right-sided colon cancer[4,5]. This is likely due to the differences in diameter and fecal consistency between the right and left sides of the colon.

We enrolled patients diagnosed with clinically and radiologically confirmed large bowel obstruction who subsequently underwent curative surgical resection for confirmed colonic adenocarcinoma at our hospital from January 2007 to April 2017. The inclusion criteria were as follows: (1) Clinically and radiologically confirmed malignant large bowel obstruction; (2) pathologically confirmed American Joint Committee on Cancer stage II–IV colon cancer; (3) a history of curative surgery including resection of metastatic lesions; and (4) a primary tumor located between the cecum and the proximal transverse colon. The exclusion criteria were as follows: (1) Double cancer; (2) lack of intent to perform bowel decompression preoperatively; and (3) unavailability of case data. The study was conducted with the approval of the Ethics Committee of our hospital (approval number 2018-27). 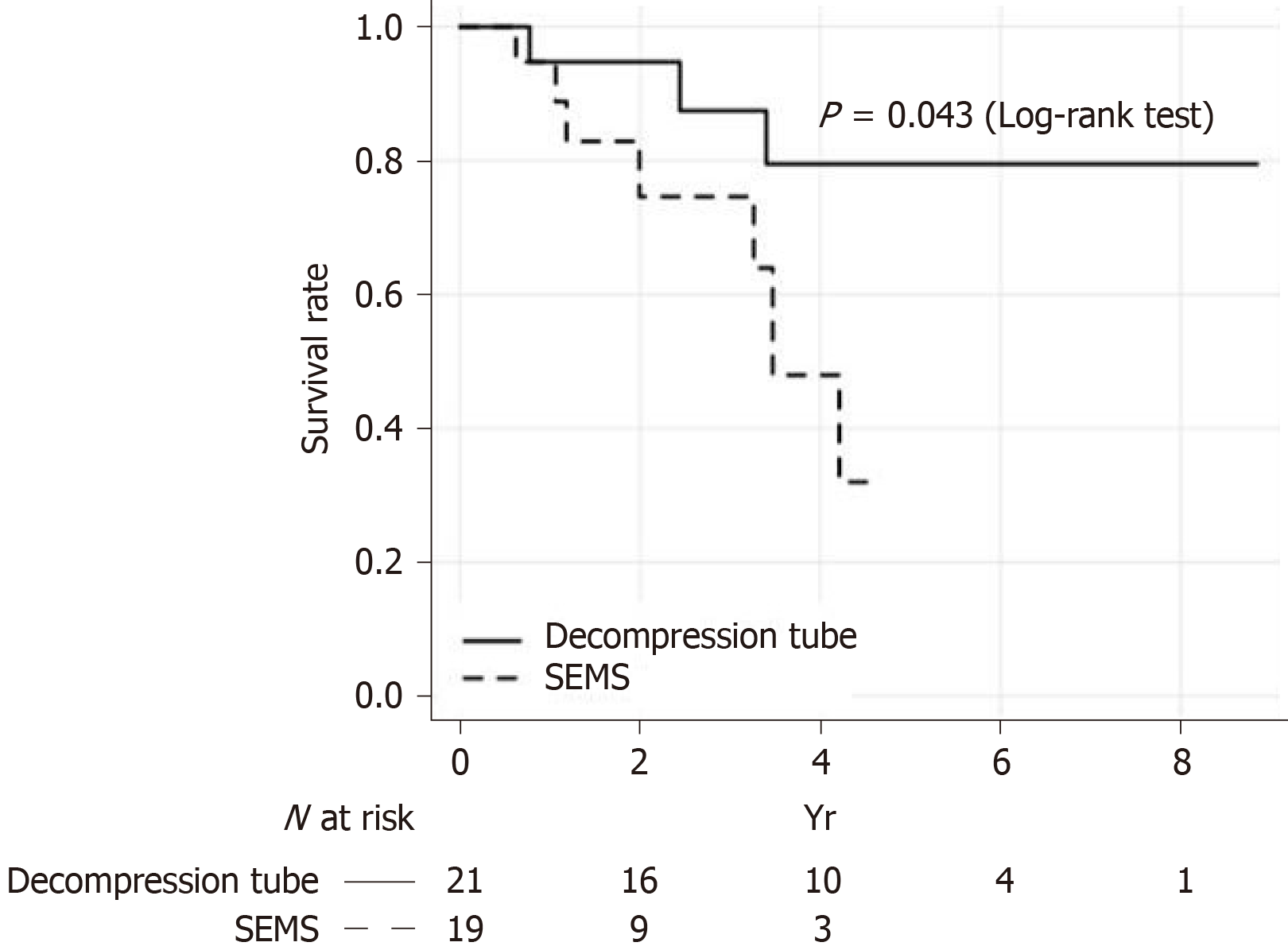 SEMS placement was performed by two experienced endoscopists. If the bowel dilatation was relieved by the SEMS, oral intake until the day before elective surgery was permitted. Colectomy was performed according to optimal oncological principles. Colectomy was performed approximately 7 d after decompression tube insertion in the decompression tube group and approximately 14-21 d after SEMS placement in the SEMS group to avoid the increased risk of complications due to prolonged tube or SEMS patency.

The follow-up investigation was performed according to the Japanese guidelines[19]. Data on the patients’ clinical characteristics, operative findings, and pathological findings were collected from the medical records. Follow-up data for all patients were available, and the study was terminated in July 2018.

The primary outcome was the overall survival (OS) duration on an intention-to-treat basis. OS was defined as the time from resection of the primary tumor to death from any cause, or was censored at the date of the last follow-up. The secondary endpoints were the disease-free survival (DFS) duration and the preoperative and postoperative morbidity rates. DFS was defined as the time between curative surgery and the first relapse, a second primary colon cancer, death from any cause when no evidence of relapse was recorded, or the last date at which the patient was known to be free of disease (time of censoring).

Continuous variables are expressed as medians and interquartile ranges (IQR). Correlations between categorical variables were analyzed using chi-squared tests, and continuous variables were analyzed using the Kruskal–Wallis test. The Kaplan–Meier method and log-rank test were used to compare survival curves. The Cox proportional hazards regression model was used for univariate and multivariate analyses. A forward-backward stepwise method was used to retain all of the variables with P < 0.05 in the final multivariate model. In addition, we calculated the propensity scores of the treatments and adjusted the hazard ratios (HRs) for OS and DFS by using inverse propensity scores as weights. All analyses were two-sided, and values of P < 0.05 were considered to indicate statistical significance. Statistical analyses were performed using IBM SPSS software version 25 (IBM Corp., Armonk, NY, United States) and R version 3.5.1 (R Foundation for Statistical Computing, Vienna, Austria), with the “MASS”, “survival,” and “rms” packages.

Table 1 shows the clinical characteristics and pathological findings of the patients. The median age of the patients at the time of surgery was 67.5 years (IQR, 59-78.75 years). The median follow-up time was 3.02 years (IQR, 1.51-5.00 years). The TNM stage distribution was 0% stage I, 42.5% stage II, 42.5% stage III, and 15.0% stage IV. Patients with stage IV colon cancer underwent curative surgery with resection of metastatic lesions. There were no significant differences in patient characteristics among the three groups, with the exception of presence of lymphatic invasion (P = 0.042).

Overall survival on an intention-to-treat basis

Disease-free survival on an intention-to-treat basis 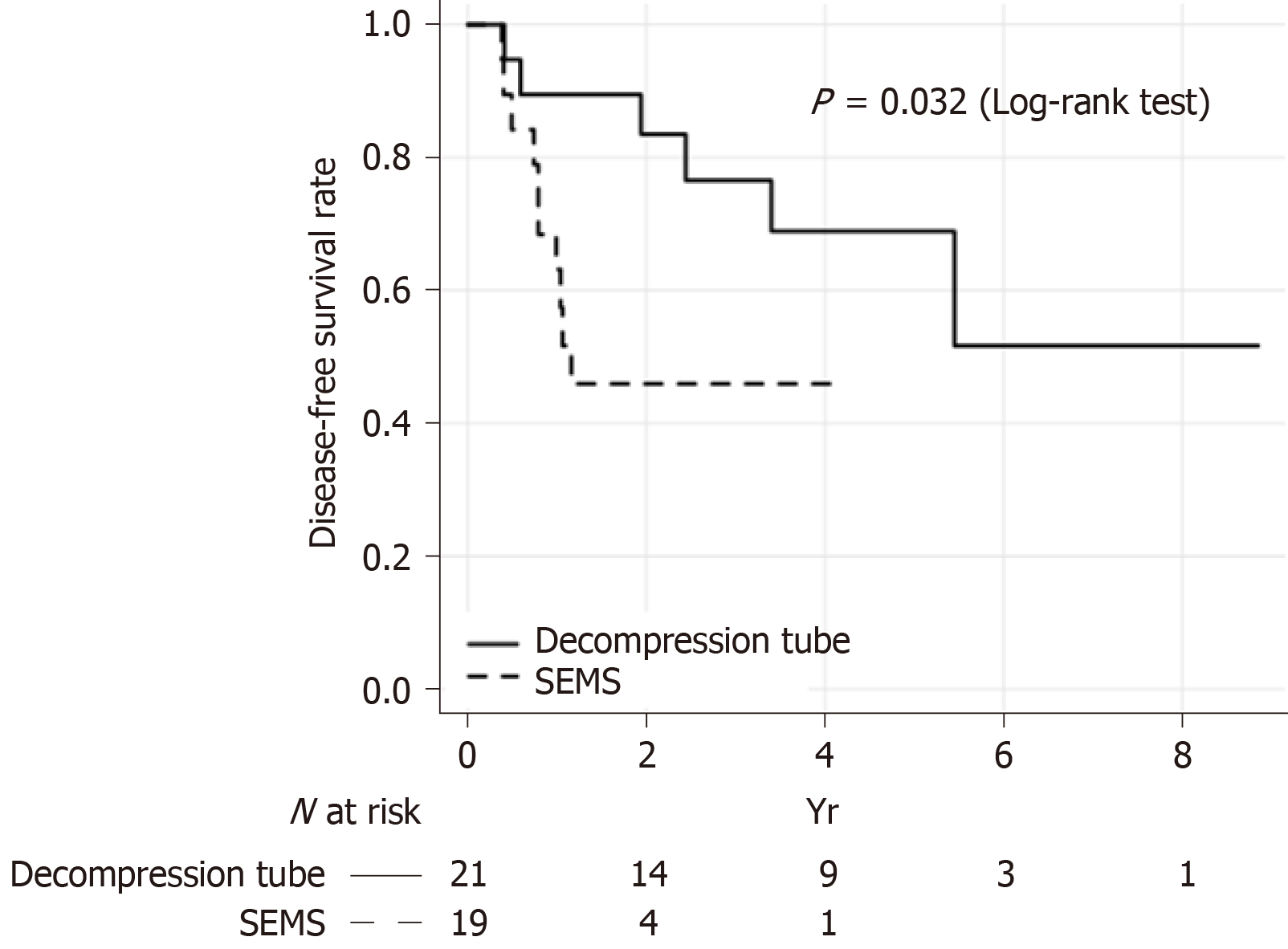 Five patients who were scheduled for treatment with a decompression tube or SEMS received emergency surgery due to technical or clinical failure. The 5-year survival rates of patients actually treated with the decompression tube and SEMS were 84.4% and 38.8%, respectively (P = 0.110, log-rank test), and the 3-year DFS rates were 71.3% and 51.8%, respectively (P = 0.113, log-rank test).

We report here the efficacy of trans-nasal and trans-anal decompression tubes for RMCO. A trans-nasal long intestinal tube reportedly improves bowel expansion in patients with RMCO[20] and a trans-anal tube facilitates preoperative colonic lavage for one-stage surgery for left-sided malignant colorectal obstruction[16,17,21]. Indeed, patients with malignant colorectal obstruction treated with trans-anal decompression tubes reportedly have an improved prognosis[18], possibly due to the high morbidity and mortality rates of emergency surgery for RMCO[22] or the conservative colectomy typically performed during emergency surgery for obstructive colon cancer. Thus, preoperative decompression tube placement may be effective for RMCO, but this requires external validation.

We also investigated the effects of a bridge to surgery using SEMS. SEMS placement is not recommended for left-sided malignant colonic obstruction as a bridge to surgery, and evidence of its suitability for RMCO is lacking[10]. Although SEMS can be successfully placed in the right colon[23,24], this did not significantly improve the long-term outcomes in a multicenter retrospective study. Our findings are in agreement with these previous reports. The reason for the superiority of the decompression tube may be the risk of tumor compression (resulting in disease progression) associated with SEMS placement. The oncological risk of SEMS may counteract the advantage of avoiding emergency surgery.

To reduce the possibility of selection bias in this retrospective study, we applied inverse propensity scores as weights, which yielded appropriate estimates with less mean squared error, increasing the reliability of the results[27]. In addition, to increase the robustness of the study, we performed an intention-to-treat analysis. Patients in the decompression tube and SEMS groups were analyzed as if they had received only those treatments, even if they actually underwent emergency surgery due to treatment failure.

There were several limitations to our study. First, as it involved a single center, the findings require external validation. Second, relatively few patients were analyzed; this is unavoidable due to the low incidence of RMCO. Third, the treatments applied for malignant colonic obstruction differ among Europe, the United States, and Asia. In Japan, long trans-nasal and trans-anal tubes are routinely used for bowel obstruction. However, in Europe and the US, long tubes are not routinely used for bowel obstruction, based on the results of an older trial[28], and trans-anal decompression tubes are not available. In addition, the preoperative quality of life of RMCO patients who are treated with a decompression tube is obviously worse than that of those treated with SEMS. The fecal odor from the tube and the presence of the tube itself make patients feel extremely uncomfortable[16]. Nevertheless, as recent studies have demonstrated the satisfactory performance of trans-nasal and trans-anal decompression tubes[18,29], their efficacy for the management of RMCO should be evaluated in a multi-center randomized controlled study.

In conclusion, preoperative bowel decompression using trans-nasal and trans-anal decompression tubes for RMCO is safe and may improve the long-term outcomes.

Although emergency surgery is a standard treatment for malignant colonic obstruction, the efficacy of bridges to surgery using self-expandable metallic stents (SEMS) or decompression tubes has only recently been evaluated.

To evaluate the optimum management strategy for patients with RMCO by comparing the perioperative and oncologic outcomes of bridges to surgery using decompression tubes and metallic stents.

This was a single-center, retrospective observational study. The subjects were patients diagnosed with RMCO who underwent curative surgical resection. We compared patients who were preoperatively treated with SEMS to those treated with decompression tubes. The primary endpoint was the overall survival (OS) duration on an intention-to-treat basis and the secondary endpoints were the disease-free survival (DFS) duration and the preoperative and postoperative morbidity rates. In addition, to reduce the likelihood of selection bias, we applied inverse propensity scores as weights.

The results of this study suggest that patients with RMCO who received a bridge to surgery using a trans-nasal or trans-nasal decompression tube had better outcomes; these results were confirmed statistically in a multivariate analysis using the stepwise method and propensity score adjustment.

Because this study used a single-center retrospective design and included relatively few patients, further investigations, such as a multi-center randomized controlled study, are needed. In addition, as the decompression tubes can make patients uncomfortable, a study including quality of life measures is desirable.