This study focused on children with chronic liver diseases who received primary hepatitis B immunization and had a complete dataset of anti-HBs before and after liver transplantation between May 2001 and June 2017. Medical records were retrospectively reviewed for potential factors relating to HBV immunity loss.

Hepatitis B virus (HBV) infection is considered a great burden worldwide owing to its chronicity and the increased risk of hepatocellular carcinoma. Moreover, antiviral therapy might not completely eradicate HBV from the human liver[1]. Since the 1980s, primary HBV immunization has been implemented to reduce HBV transmission and has shown high efficacy and good serological correlates for protective immunity[2,3]. The rapid and robust response, which usually develops 5-8 d after re-exposure to the HBsAg and peaks after approximately 14 d, indicates the long-lasting protective property of the vaccine despite the undetectable anti-HBs titer[4-6]. In contrast, a more rapid decline of anti-HBs antibody level has been observed in children post-liver transplantation compared to healthy children[7,8], which corresponds to a loss of protection as de novo HBV infection was evident in some cases[9-11]. This evidence implied that these immunocompromised patients might need a higher protective level of anti-HBs antibody with which to prevent HBV infection following liver transplantation[11-14].

The assessment of anti-HBs titers is recommended in patients who have undergone liver transplantation[12-14], but there is a lack of data regarding an appropriate schedule for revaccination. Moreover, there is insufficient data supporting the disease burden of de novo hepatitis B infection after liver transplantation, especially if the liver is from an antiHBc-negative donor[9,10].

MATERIALS AND METHODS
Recruitment of participants

Routine history taking and physical examination, including weight and height measurement, were carried out by physicians. Anti-HBs, anti-HBc, and HBsAg were tested concurrent with routine laboratory testing during the follow-up visit to the transplant clinic. Verbal consent was obtained from the caregivers. Ethical approval was granted by the Ethics Committee, Faculty of Medicine, Chulalongkorn University (IRB number: 614/60).

Continuous and categorical data were presented as mean ± SD/median (range) and proportion or percentage, respectively. The Mann-Whitney U test and unpaired t-test were used to compare continuous data, as appropriate. The Chi-square test was used to compare categorical data. Analysis of variance (ANOVA) was used to compare more than 2 continuous variables. Multiple linear regression was performed to investigate the influence of significant parameters on the loss of anti-HBs after liver transplantation. A P-value > 0.05 was regarded as being statistically significant. Data analyses were performed using SPSS version 24.0.0 (SPSS, Inc., Chicago, IL, United States).

Seventy-two children underwent liver transplantation between May 2001 and June 2017. All children were negative for HBsAg. Twenty-two cases were excluded for the following reasons: incomplete anti-HBs data (n = 12), anti-HBs < 10 IU/L (n = 8) before transplantation, and age > 18 years (n = 2). Finally, 50 children were recruited into the present study with a mean age of 6.67 ± 4.63 years; 54% were female (Figure 1). The indications for liver transplantation were biliary atresia (n = 39), Alagille syndrome (n = 2), progressive familial intrahepatic cholestasis (PFIC) (n = 2), primary bile acid deficiency (n = 1), fulminant Wilson’s disease (n = 1), hepatoblastoma (n = 1), glycogen storage disease (n = 1) and cryptogenic cirrhosis (n = 3). All children received primary hepatitis B vaccination at birth and at 1 and 6 mo of age. Twenty-three subjects received one booster dose 1-2 mo before transplantation. Twenty-three subjects had high anti-HBs (> 1000 IU/L) before liver transplantation. Most subjects received a living donor liver transplantation from their parents (n = 44, 88%), while 6 (12%) received a liver from a cadaveric donor. Children who received an anti-HBc-positive liver from the 6 cadaveric donors were required to take lifelong lamivudine. The severity of chronic liver disease, or PELD score and MELD score, were 18.38 ± 8.47 (n = 47) and 15 (range: 11-19; n = 3), respectively. All children received at least two immunosuppressants early after transplantation and only one immunosuppressant subsequently, with the exception of immunosuppressive agent-withdrawal in one female patient. This particular patient developed post-transplantation lymphoproliferative disease (PTLD) and ongoing cholestasis, and is thus awaiting re-transplantation. The clinical and demographic characteristics of all participants and donors are shown in Table 1. 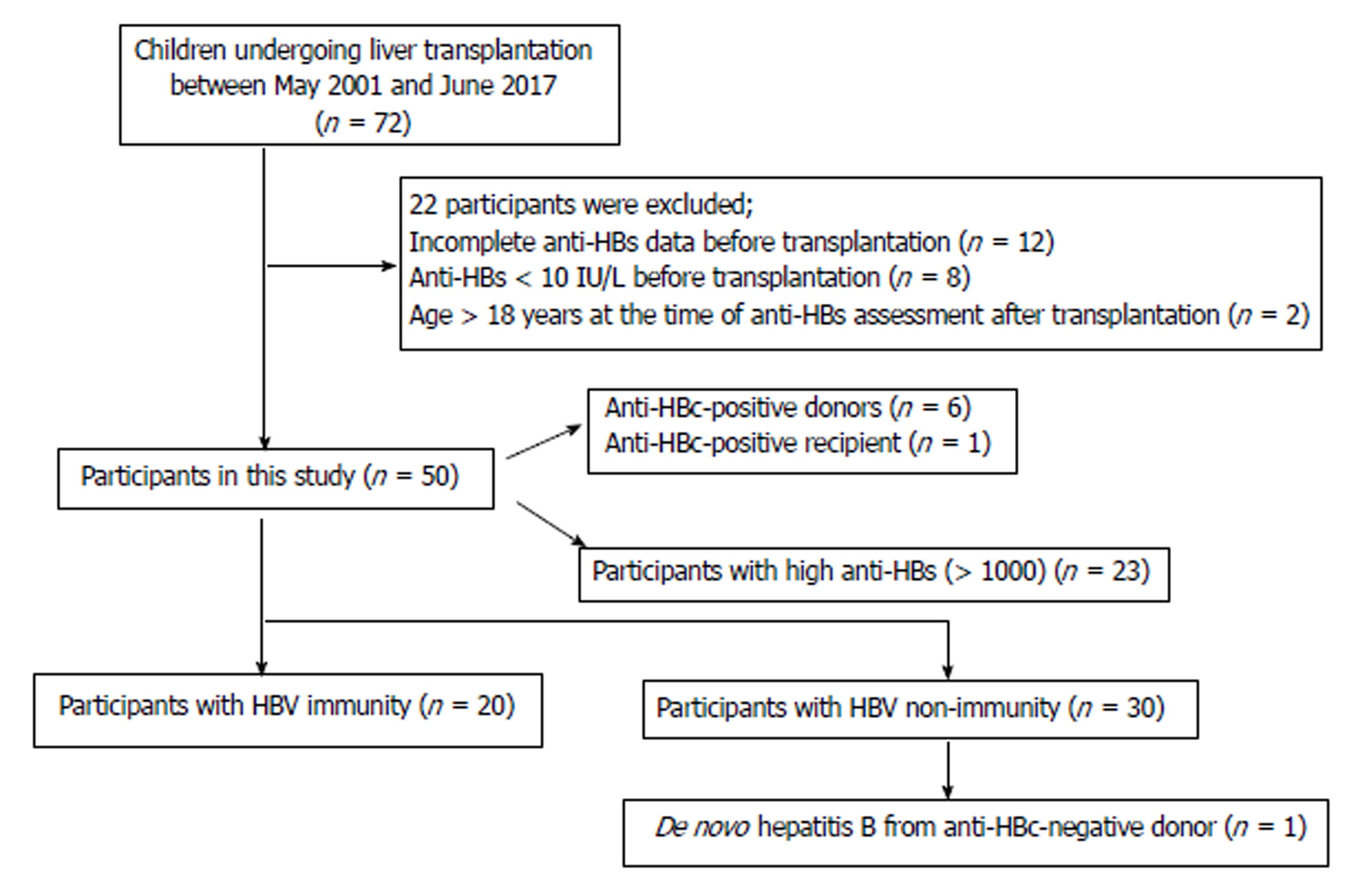 Nutritional status, disease severity and the immune status of subjects before and after liver transplantation

Comparing participants with HBV immunity and loss of immunity

A patient with de novo hepatitis B

A five-year-old boy with biliary cirrhosis and an unsuccessful Kasai’s operation underwent liver transplantation at 14 mo of age; his anti-HBc-negative father was the donor. He received 4 doses of HBV vaccine prior to liver transplantation, and his pre-existing anti-HBs antibody titer was > 1000 IU/L. His parent’s viral profiles were negative for HBV infection (HBsAg, anti-HBc, and anti-HBs were all negative). After liver transplantation, he developed stenosis at the hepatic artery leading to the inferior vena cava anastomosis and underwent venoplasty with balloon dilatation three times. Furthermore, he was given subcutaneous enoxaparin injections every 12 h for 5 mo and transfused 20 times with blood components. Three years and ten months after the liver transplantation, transaminitis was detected, with positive tests for HBsAg, HBeAg, and anti-HBc (2169.61, 1706, and 8.45, respectively; cutoff value: < 1.00), and an HBV viral load of 33212320 IU/mL. The timeline of this patient is shown in Figure 2.

Figure 2 Timeline of the case report from pre-liver transplantation to diagnosis of HBV infection. HBV: Hepatitis B virus.

Several possible routes of HBV infection after liver transplantation were investigated. His father and mother were both tested for HBsAg, anti-HBc, and anti-HBs titers and serum HBV viral load; all results were negative. There were no apparent HBsAg carriers in the patient’s family. Another strong possibility might be from blood transfusion, in which the blood component was partly derived from a recently infected donor. However, the handling of blood and blood products in Thailand is extremely safe, as we employ the universally-accepted nucleic acid amplification test (NAT) to screen for HBV, hepatitis C virus, and HIV from all blood donors. All 15 donors who donated blood to this patient had undergone repeat NAT-based HBV testing and none had any evidence of HBV occult infection. The de novo activation of HBV with escape mutations from hepatitis B surface antibody after living donor liver transplantation has been documented previously, however, no vaccine escape mutants were found when the HBs gene was screened in our patient (Figure 3).

Other predictive parameters responsible for rapid anti-HBs loss are cholestasis and low albumin levels. Low albumin levels might reflect the poor synthetic function of the liver, or severe malnutrition, or both. A previous study confirmed that albumin infusion could restore the immunological function of patients with decompensated cirrhosis by increasing circulating PGE2, a potent immunomodulator, both in vitro and in vivo[27-29]. However, a study by Leung et al[8], and this present study, could not demonstrate a significant difference in terms of disease severity when comparing PELD score between patients in immune and non-immune groups. While the mean PELD score in Leung et al’s[8] study was higher than the present study, the mean serum albumin level, which is one of the parameters used to calculate the PELD score, was in the upper normal level in Leung et al’s[8] study compared to the low albumin level in the present study. This upper normal level of serum albumin might imply that the subjects involved in this previous study had already received albumin infusion at the time of data collection. In the present study, we evaluated the PELD score every three months from when the patients joined the waiting list for transplantation and chose the most recent PELD score, at which point, albumin infusion had not been initiated. One limitation of our method is that our PELD score might be lower than the actual PELD score prior to liver transplantation; however, we obtained actual serum albumin data for analysis and that might be why our data showed lower PELD scores, with significantly low albumin levels in patients with anti-HBs loss, than the data reported by Leung et al[8]. As a result, while waiting for liver transplantation, albumin infusion is an effective treatment option to treat not only hepatorenal syndrome and spontaneous bacterial peritonitis, but also gain better immunity; this practice represents common practice for most chronic liver diseases in children.

In the present study, we were unable to demonstrate a significant effect of nutritional status upon anti-HBs immunity after liver transplantation. In our transplant unit, children were not routinely tested for lipid soluble vitamins A, D, and E. Furthermore, body weight and BMI are not the best parameters to perform nutritional assessment, as some children suffered from edema and huge abdominal distension as a result of ascites. Moreover, the immunosuppressants and complications after liver transplantation were not shown to be significantly associated with the loss of anti-HBs; in this respect, our study was consistent with Leung et al[8].

Our study has some limitations which need to be considered, particularly the low number of participants, inadequate data reflect the nutritional status, and the heterogeneity of immunosuppressant-use among patients. A larger, well-designed, multicenter study, using the same protocol of care after liver transplantation, is now needed to validate our present results.

Regular assessment of anti-HBs and revaccination after liver transplantation to maintain an anti-HBs titer level above the protective threshold should be considered to prevent de novo hepatitis B. Further studies should aim to identify the best rationale for a reimmunization program to effectively re-establish active immunity to HBV.

Re-assessment of anti-HBs levels and vaccination to maintain levels of anti-HBs above the protective level might prevent de novo hepatitis B after liver transplantation. Studying the immunological response of HBsAg-specific T and B cells following HBV exposure in order to establish an appropriate cutoff for the protective level of anti-HBs to prevent HBV infection in children after liver transplantation will be merit. Moreover, setting up an appropriate HBV immunization protocol to re-establish active HBV immunity by assessing cellular and humoral immunity response after HBV immunization protocols over short- and long-term follow-up periods also should be considered.

We thank the staff, fellows and nurses in our liver transplant team at King Chulalongkorn Memorial Hospital, Bangkok 10330, Thailand for excellent patient care.