Core tip: Although gastric adenocarcinoma can metastasize to almost any organ, metastasis to the dura mater is rarely reported. Here, we report a rare and clinically meaningful case of dural metastases to the spine and skull base from gastric adenocarcinoma that was treated with palliative local radiotherapy. This is the first reported case of dural metastases of gastric adenocarcinoma of the spine and skull base with involvement of the surrounding structures but with a relatively indolent course and without subdural hematoma. Local radiotherapy was effective for the relief of neurologic symptoms.

Gastric cancer is the fourth most frequent malignancy and the second most common cause of cancer-related death in the world[1]; it is also the second most frequent malignancy in Korea[2]. Although patients with early gastric cancer can be cured by surgical resection, a large majority of patients relapse after surgical resection or are initially diagnosed with metastatic disease. The most common metastatic sites of gastric cancer are the liver, peritoneum, lymph nodes, lung, and bone[3]. Central nervous system metastasis is a very rare manifestation of gastric cancer, occurring in 0.16-0.69% of patients, and mostly consists of brain parenchymal metastasis or leptomeningeal carcinomatosis[4]. Dural metastasis of all central nervous system metastasis has been rarely reported in cases of gastric cancer[5-9]. Here, we report a rare and clinically meaningful case of dural metastases from gastric adenocarcinoma that was treated with palliative local radiotherapy.

A 43-year-old woman with metastatic gastric cancer presented with a 1-wk history of progressively worsening lower back and radiating right leg pain in December 2016. Physical examination revealed mild numbness at the right inner thigh, but there were no abnormal findings, including sensory abnormalities or motor weakness in the lower extremities, on physical examination. She had a history of advanced gastric adenocarcinoma that was diagnosed in September 2014. Esophagogastroduodenoscopy revealed a 3-cm sized ulcerofungating mass on the anterior wall of the greater curvature of the gastric body (Figure 1), and endoscopic biopsy confirmed a histologic diagnosis of poorly cohesive carcinoma. A computed tomography (CT) scan of the abdomen revealed lymph node enlargement in the perigastric area and no evidence of metastasis, the clinical stage was determined as T3N1M0, cStageIII. She underwent a subtotal gastrectomy with D2 lymph node dissection, and the postoperative pathologic findings were poorly cohesive carcinoma (pT4aN2M0, pStageIIIB). 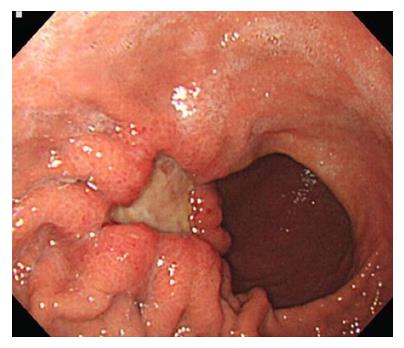 Figure 1 Esophagogastroduodenoscopy revealed a 3-cm sized ulcerofungating mass on the anterior wall of the greater curvature of the gastric body.

The patient was treated with adjuvant capecitabine and oxaliplatin chemotherapy for 6 mo. However, in September 2015, she was diagnosed with ovarian metastasis and peritoneal carcinomatosis. She was treated with cytoreductive surgery and hyperthermic intraperitoneal chemotherapy followed by systemic chemotherapy (2nd line paclitaxel and 3rd line irinotecan) until December 2016. Magnetic resonance imaging (MRI) of the lumbosacral spine revealed an enhancing dural mass at the lumbosacral junction with invasion to the right L5 and S1 nerve roots (Figure 2). She was treated with 3D conformal radiotherapy of 36 Gy in 12 fractions to the lumbosacral junction under a diagnosis of spinal dural metastasis from gastric adenocarcinoma. Her lower back and radiating right leg pain abated after palliative radiotherapy.

At 3 mo later, in April 2017, she presented with a 2-wk history of a progressively worsening loss of sensation on the left side of the face and hearing loss in the left ear. On physical examination, she showed numbness of the left face and tongue, and motor weakness of the chewing muscles. Pure-tone audiometry showed left side deafness. MRI of the brain revealed an enhancing dural lesion at the left cerebellopontine angle with extension to the trigeminal nerve and internal auditory canal (Figure 3). There was no evidence of other distant metastases upon CT scan of the thorax, abdomen, and pelvis. She was treated with intensity modulated radiotherapy of 40 Gy in 10 fractions to the dural mass at the left skull base under a diagnosis of cranial dural metastasis from gastric adenocarcinoma. Her left hearing loss did not improve, but the left facial palsy improved after palliative radiotherapy. 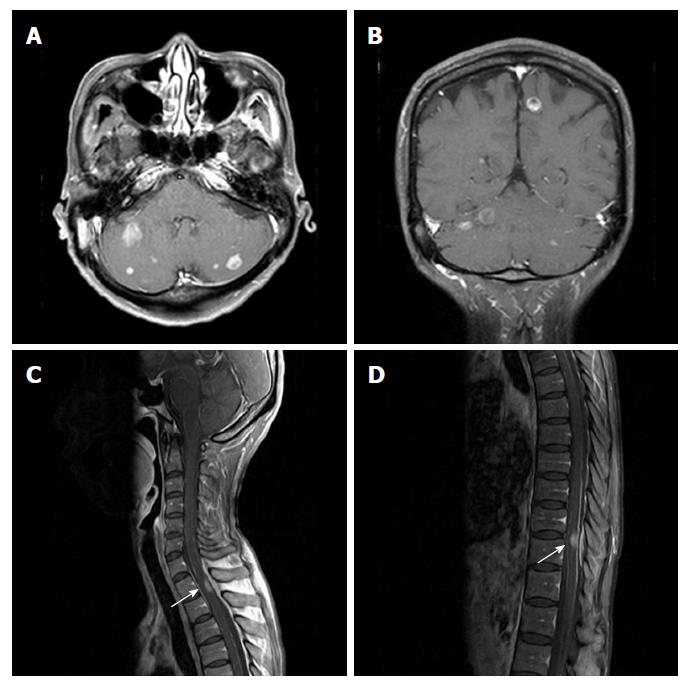 Dural metastases of extraneuronal malignancies are detected in approximately 10% of autopsy cases[10]. The relatively common neoplasms associated with dural metastasis are breast, prostate, lung cancer, melanoma and hematologic malignancies[11,12]. However, dural metastasis in gastric adenocarcinoma has been rarely reported[5-9]. Direct extension of bone metastases and direct hematogenous spread have been proposed as mechanisms for the spread of extraneuronal malignancies to the dura[11,12]. Dural metastases are usually a late manifestation of the malignant disease, which contributes greatly to the severity of the prognosis. The lesions often remain clinically asymptomatic, but they may become symptomatic due to mass effect or the accumulation of subdural fluids, including acute or chronic hematomas and malignant effusion.

The available literature suggests a poor prognosis for patients presenting with dural metastases, although this is most likely a reflection of the disseminated nature of the underlying disease rather than a direct consequence of dural involvement[11,12]. Survival varies considerably according to the primary tumor type and the extent of the systemic disease; favorable courses are generally observed in primary breast, prostate, renal cell carcinoma, and hematologic malignancy. Dural metastasis from primary gastric adenocarcinoma has been rarely reported, and its prognosis is very poor because the prognosis of metastatic gastric adenocarcinoma itself is poor and because it frequently leads to subdural hematoma[5-9]. The prognosis of subdural hematoma caused by dural metastasis is extremely poor, and in most reported cases, the patients died within a short period of time[9].

Several mechanisms have been proposed for the formation of subdural hematomas associated with dural metastasis. Obstruction of the dural veins by tumor cells can cause dilatation of the capillaries in the inner areolar layer, followed by rupture and subdural hemorrhage. Infiltration of the dura by malignant cells can also induce an angiodesmoplastic reaction, resulting in the formation of an abnormal neomembrane that is highly vascular, into which hemorrhage can occur more easily[8,9,11]. Kunii et al[13] analyzed 51 reported cases of subdural hematoma and found that the most common histological type in which subdural hematoma occurred was adenocarcinoma and the most common primary tumor site was the stomach. In our case, unlike in the previously reported cases of dural metastasis from gastric adenocarcinoma, acute or chronic subdural hematoma did not develop and the course of the disease was relatively indolent, as is more commonly seen in breast or prostate cancer.

No standard of treatment has been clearly defined for the management of dural metastasis. High-dose dexamethasone can produce symptom relief even in the absence of cerebral edema, and evacuation of symptomatic subdural hematoma should be considered. Surgical resection is rarely performed and is reserved for single metastatic lesions causing severe symptoms. Stereotactic radiosurgery or local radiotherapy either alone or in combination with whole brain radiotherapy seems to be a safe and effective treatment option[11,12]. Therefore, the therapeutic approach employed should be chosen based on the individual condition of each patient. In the described case, local radiotherapy was performed because the systemic cancer was controlled and there was no subdural hematoma. As a result, cancer pain and neurologic deficits caused by the dural mass were effectively controlled.

This case differs in some ways from the previously reported cases of gastric adenocarcinoma with dural metastasis. First, this case was not associated with subdural hematoma or fluid collection. Second, dural metastases in the previous cases occurred in the dura mater around the cerebral cortex, but in this case, metastases occurred sequentially in the dura mater around the spinal canal and skull base. Therefore, while in the previously reported cases the main symptoms were associated with invasion to the underlying brain parenchyma, resulting in elevated intracranial pressure, in this case the patient presented with lower back pain and symptoms associated with trigeminal nerve palsy. Third, the lesions in this case were spread widely along the dura mater, and there was invasion of the surrounding structures. The initial, spinal dural metastasis caused invasion to the L5 and S1 nerve roots, resulting in radiating leg pain, and the second, cranial dural metastasis at the skull base caused invasion to the internal auditory canal, resulting in hearing loss.

This is the first reported case of gastric adenocarcinoma metastasizing sequentially to the dura mater in the spinal canal and skull base without subdural hematoma. Although these circumstances are rare, local radiotherapy may be effective for the relief of neurologic symptoms in cases of dural metastasis of gastric adenocarcinoma with an indolent course and controlled systemic disease.

Spinal and brain metastases were suspected.

All laboratory tests were within normal limits.

The postoperative pathologic findings were poorly cohesive carcinoma and the patient was diagnosed with advanced gastric adenocarcinoma.

The patient was treated with palliative local radiotherapy.