In total, 874 participants were analyzed with 70%, 16%, 8.7%, and 5.1% of them in the groups A, B, C, and D, respectively. Patients in group C were older than patients in groups A and B. Gastric open-type atrophy, intestinal metaplasia, enlarged folds, diffuse redness, and duodenal ulcers were associated with a high titer. Regular arrangements of collecting venules, fundic gland polyps, superficial gastritis, and gastroesophageal reflux disease were related to a low titer. Multivariate analysis revealed that nodularity (P = 0.0094), atrophy (P = 0.0076), and age 40-59 years (vs age ≥ 60 years, P = 0.0090) were correlated with a high serum antibody titer in H. pylori-infected patients. Intestinal metaplasia and atrophy were related to age ≥ 60 years in group C and D.

Serum antibody titer changes with age, reflects gastric mucosal inflammation, and is useful in predicting the risk of gastric cancer.

Helicobacter pylori (H. pylori) infection is the main carcinogenic entity in the stomach, and eradicating it reduces the incidence of gastric cancer[1-5]. The 13C-urea breath test (UBT), serum immunoglobulin G anti-H. pylori antibodies, stool antigen test, esophagogastroduodenoscopy (EGD), rapid urease test, culture, and pathology are used in routine practice to diagnose H. pylori infection. UBT is the gold standard for diagnosing H. pylori infection because its accuracy is the best of all these tests[2,6]. However, UBT requires the patients to stop using proton pump inhibitors or antibiotics.

Other than UBT, measuring the serum antibody titer is useful because serum antibody testing is easy, inexpensive, and hardly affected by changes in the stomach[7]. Some serological tests are of high-quality, and measuring the antibody titer once in adults makes it possible to observe subsequent changes in it with time and diagnose H. pylori infection[8-11]. Serum antibody titer is useful to evaluate both new-onset and successful eradication of the disease[12]. Furthermore, serum antibody titer is associated with the risk of gastric cancer. For example, a high titer correlates with diffuse-type of gastric cancer according to Lauren’s classification. A positive-low titer and negative-high titer are associated with intestinal-type cancer[10,13-15]. An E-plate (Eiken Chemical, Tokyo, Japan) is frequently used for commercial serological examination in routine clinical practice in Japan. The E-plate is a direct enzyme immunoassay test designed to identify the Japanese strain of H. pylori and has been widely applied in large-scale studies in Japanese participants[14,16]. The manufacturer defined the cutoff E-plate titer as 10 U/mL and reported that its accuracy, sensitivity, specificity, positive predictive value, and negative predictive value were 94.0%, 95.2%, 92.6%, 93.8%, and 94.3%, respectively[17].

This retrospective study was approved by the ethical review committee of Hattori Clinic on September 7, 2017. Written informed consent was obtained from the participants. All clinical investigations were conducted according to the ethical guidelines of the Declaration of Helsinki.

We enrolled consecutive patients who underwent EGD and serum antibody testing at Toyoshima Endoscopy Clinic, which is an endoscopy specialty clinic, between September 2016 and August 2017. We included patients who were evaluated for H. pylori infection for the first time. The indications for EGD were the symptoms, abnormal findings on upper gastrointestinal radiography, screening, or surveillance for upper gastrointestinal diseases. The serum antibody titer was measured at the time of EGD. We excluded patients with a history of H. pylori eradication therapy, gastric cancer, or gastrectomy.

We grouped the subjects based on their serum antibody titers. Data on the patients’ baseline characteristics, including age, sex, and indication for EGD, were collected.

The serum antibody titer was measured using the following enzyme-linked immunoassay kit using antigens derived from Japanese individuals: E-plate Eiken H. pylori antibody II kit (Eiken Chemical, Tokyo, Japan). The measurable titers were ≥ 3 U/mL and < 100 U/mL. The manufacturer recommended a cut-off value of 10 U/mL for H. pylori positivity. We previously reported that a titer of 3-9.9 U/mL had a lower negative predictive value than a total titer of < 10 U/mL did (83.1% vs 94.3%)[11]. A titer of 3-9.9 U/mL was also reported to indicate the risk of intestinal gastric cancer[15]. The previous study set the cut-off point as 50 U/mL to differentiate the low and high serum antibody titer groups, ensuring that the ratio of patients in both groups was approximately half of all H. pylori-seropositive subjects. A titer of 10-49.9 U/mL was reported to indicate the risk of intestinal gastric cancer, and a titer ≥ 50 U/mL was considered to indicate the risk of diffuse cancer[10].

EGD was performed using the Olympus Evis Lucera Elite system with GIF-HQ290 or GIF-H290Z endoscope (Olympus Corporation, Tokyo, Japan) by expert physicians who jointly met and discussed the endoscopic images before this study. We performed EGD with the patient under conscious sedation with midazolam and/or pethidine hydrochloride. Other expert physicians retrospectively reviewed the EGD images. Discrepancies in diagnoses between the two sets of physicians were resolved through a discussion between them.

We evaluated the Kyoto classification of gastritis score[19]. The Kyoto classification of gastritis is based on the sum of the scores of the following five endoscopic findings, which are scored on a scale from 0-8: Atrophy, intestinal metaplasia (IM), enlarged folds, nodularity, and redness. A high score represents an increased risk of gastric cancer[15,20]. Gastric atrophy was classified according to the extent of mucosal atrophy, as described by Kimura and Takemoto[21]. Classifications of C-II and C-III were scored as 1, while those of O-I to O-III were scored as 2. IM is typically observed as grayish-white and slightly opalescent patches. IM within the antrum was scored as 1 and IM extending into the corpus was scored as 2. Enlarged folds greater than 5 mm were scored as 1. Nodularity is characterized by the appearance of multiple whitish elevated lesions, mainly in the pyloric gland mucosa. Nodularity was scored as 1. Diffuse redness refers to uniform redness involving the entire fundic gland mucosa. Redness with regular arrangements of collecting venules (RAC) was scored as 1 and that without RAC was scored as 2.

We also investigated gastric and duodenal ulcers. Ulcer scars were considered positive findings. RAC, fundic gland polyps, superficial gastritis, gastroesophageal reflux disease (GERD), Barrett’s esophagus (BE), and hiatal hernia were considered H. pylori infection-negative endoscopic findings[19]. We defined the three endoscopic findings of hematin (bleeding spots), red streaks (linear erythema), and raised erosion as superficial gastritis. We defined grade A (one or more mucosal breaks of ≤ 5 mm in length) or worse of the Los Angeles classification of GERD as positive. Short-segment BE was classified as BE.

First, we evaluated the association between the serum antibody titer and age, sex, indication, and endoscopic findings using Kruskal-Wallis test for continuous variables and Cochran-Armitage test, chi-squared test, or polytomous logistic regression analysis for categorical variables in the four groups. Simultaneously, in comparisons between two groups, Steel-Dwass test was used for continuous variables. Second, we compared patients with H. pylori infection (groups C and D) based on age (< 40 years, 40-59 years, and ≥ 60 years) using the Cochran-Armitage test. Subsequently, we conducted a subgroup analysis of H. pylori-infected patients (groups C and D). We evaluated the effect of age, sex, indication, and endoscopic findings on the serum antibody titer in univariate analysis using the Mann-Whitney U test for continuous variables and Fisher’s exact test or a binominal logistic regression analysis for categorical variables. We considered age 40-59 years as the reference. Finally, we performed multivariate analysis to identify the factors that were independently associated with the serum antibody titer using a binominal logistic regression analysis of the variables with a P-value less than 0.1 in the univariate analysis. A two-sided P-value less than 0.05 was considered statistically significant. The data were analyzed using Ekuseru-Toukei 2015 software (Social Survey Research Information, Tokyo, Japan).

In our analysis of the association between serum antibody titer and baseline characteristics and endoscopic findings in all participants, we found that those in group C were significantly older than those in groups A and B (P = 0.018 and 0.025, respectively, Table 1). There was no difference in sex and indication between the patients in the four groups. We found that the Kyoto classification of gastritis score in group B was higher than that in group A, and those in groups C and D were higher than that in group B (mean score of groups A, B, C, and D: 0.11, 0.43, 1.92, and 2.33, respectively; group A vs B, group B vs C, and group B vs D: P < 0.001; group C vs D: P = 0.32, Table 1). Open-type atrophy (according to the Kimura-Takemoto classification), IM, enlarged folds, nodularity, diffuse redness, and duodenal ulcers occurred more frequently in patients with a higher titer than in those with a lower titer. However, the frequencies of RAC, fundic gland polyps, superficial gastritis, and GERD were lower in patients with a higher titer (Table 1). Representative endoscopic images are shown in Figure 1A-F. The proportion of patients in group C and D who were H. pylori-infected increased with age (< 40 years: 9.9%; 40-59 years: 12.9%; ≥ 60 years: 22.0%; P < 0.001, Figure 2A). 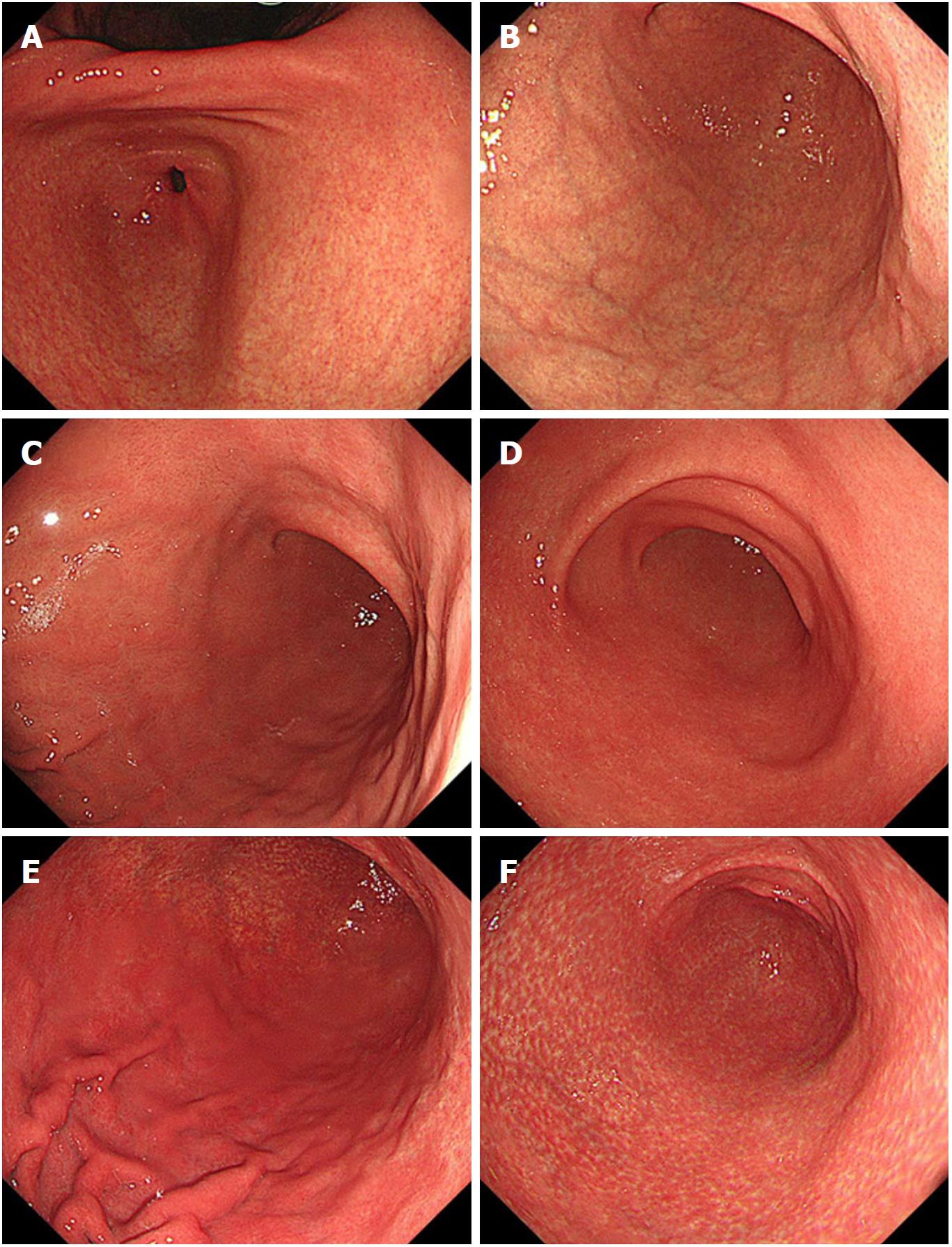 We compared the endoscopic findings of H. pylori-infected patients aged < 60 years and those ≥ 60 years, as shown in Table 3. Intestinal metaplasia and gastric atrophy were related to age ≥ 60 years in group C and D.

The H. pylori infection rate is declining in Japan; however, our study indicated that a large number of people have negative antibodies, but high titers. Since some previous studies have demonstrated that patients with negative-high serum antibody titers, especially those with H. pylori infection, were at a risk of developing intestinal gastric cancer, these results should be considered in clinical practice[10,11,14,15].

We previously reported that the H. pylori infection rate was 17% in group B[11]. The infection rate at the time serum antibodies were measured was 13% in people < 40 years old, 15% for those aged 40-59 years, and 25% for those ≥ 60 years. Ueda et al[27] described that the prevalence of H. pylori infection in Japan was the highest in patients born between 1940-1949 and then decreased in those born in the ensuing years. Our results were concordant with those of their reports and might indicate the current infection rate in urban areas in Japan.

In H. pylori-infected patients, high titers of serum anti-H. pylori antibodies were associated with gastric nodularity and atrophy, and the serum antibody titer tended to decrease in 60-year-old patients. Serum antibody titer reflects gastric mucosal inflammation; therefore, patient with high antibody titer may be at risk for diffuse gastric cancer and should be carefully screened in clinical practice.

Few studies have reported on the relationship between the serum antibody titer and endoscopic findings.

To clarify the role of serum anti-H. pylori antibody titers in gastric cancer.

A cross-sectional study was conducted to investigate the effect of patients’ baseline characteristics and endoscopic findings on their serum antibody titers. We excluded patients with a history of eradication therapy.

In the future, population-based research is expected.