To investigate the incidence and risk factors of portosplenomesenteric vein thrombosis (PSMVT) in the early stage of severe acute pancreatitis (SAP).

Patients with SAP in a tertiary care setting from January 2014 to December 2016 were retrospectively reviewed. All contrast-enhanced computed tomography (CT) studies were reassessed and reviewed. Clinical outcome measures were compared between SAP patients with and without PSMVT in the early stage of the disease. Univariate and multivariate logistic regression analyses were sequentially performed to assess potential risk factors for the development of PSMVT in SAP patients. A receiver operating characteristic (ROC) curve was generated for the qualifying independent risk factors.

Core tip: Studies on portosplenomesenteric vein thrombosis (PSMVT) occurring in the early stage of acute pancreatitis (AP) were rare. We found that 17.86% of severe AP patients developed PSMVT 6.19 d after AP onset. High Balthazar’s computed tomography severity index (CTSI) scores, hypoalbuminemia and gastrointestinal wall thickening are independent risk factors for the development of PSMVT, and Balthazar’s CTSI scores can predict the occurrence of PSMVT with a high degree of specificity which indicated that a low Balthazar’s CTSI score could be a good indicator that PSMVT would not occur.

Portosplenomesenteric vein thrombosis (PSMVT) involves the portal vein (PV), splenic vein and superior mesenteric vein (SMV), either separately or in combination. In most cases, PSMVT does not cause any additional symptoms, but may sometimes generate localized portal hypertension, leading to gastrointestinal and intra-abdominal hemorrhage, ascites, splenomegaly, and splenic infarction, among other problems[1,2]. The previous studies reported that PSMVT mostly occurs late during acute pancreatitis (AP)[3-5], and is usually detected incidentally on radiological imaging performed to evaluate the severity of AP[6].

Until now, the detailed natural history of PSMVT has remained unknown, and the pathogenesis underlying PSMVT in patients with AP has remained unclear and may involve many clinical factors. There is little data regarding the risk factors for this complication in the early stage of AP. The results about the risk factors of PSMVT in AP patients vary among studies[3,5,7-10]. Therefore, in this study, we analyzed the data to explore the incidence of PSMVT in the early stage of severe AP (SAP), the risk factors for the development of PSMVT, and the clinical outcomes of PSMVT.

Consecutive adult patients (age ≥ 18 years old) with SAP who were admitted to the First Affiliated Hospital of Nanchang University between January 2014 and December 2016 were enrolled in this study. Exclusion criteria include the following: (1) Admission > 6 d after AP onset; (2) history of AP, chronic pancreatitis, pancreatic malignancy or cysts; (3) no contrast-enhanced CT examination ≤ 10 d after AP onset; (4) pregnancy; and (5) cirrhosis or coagulopathy disorder diseases or other systemic tumors.

All contrast-enhanced CT studies were reassessed and reviewed by a radiologist who specialized in abdominal imaging and was blinded to the clinical data. Contrast-enhanced CT was generally performed approximately 3-10 d after AP onset, with an average of 7 d. Thus, PSMVT, which occurred within 10 d after AP onset, was detected. All contrast-enhanced CT examinations were performed using a 64-channel multidetector CT scanner (Somatom Definition AS+, Siemens Medical Systems, Erlangen, Germany). After noncontrast scans were obtained, 1.3 mL/kg iopromide (Ultravist 370; Bayer Schering Pharma, Berlin, Germany) was intravenously injected at a rate of 3 mL/s with a high-pressure injector. Then, contrasted arterial and portal phase scans were obtained when the attenuation of the aorta at the thoracolumbar junction had reached 180 HU with a fixed 60 s delay. The scanned area extended from the diaphragmatic domes to the pubic symphysis.

The diagnosis of PSMVT was based on the results of the contrasted-enhanced CT. Thrombosis was defined as a filling defect within the lumen of the vessel seen on contrast-enhanced CT images. SAP was defined by persistent organ failure, that was, organ failure for longer than 48 h13]. Extrapancreatic necrosis alone was defined as extrapancreatic morphological changes exceeding fat stranding with complete enhancement of the pancreatic parenchyma without signs of focal or diffuse nonenhancement that could be determined on contrast-enhanced CT images[13]. Pancreatic parenchymal necrosis was defined as focal or diffuse nonenhancement of the pancreatic gland. When pancreatic necrosis was present, its location (head, neck, body, tail) and amount (< 30%, 30%-50%, > 50%) were noted. Acute peripancreatic fluid collections (APFCs) were defined as peripancreatic fluid collections with homogeneous liquefied components and without well-defined walls. The anatomical locations of APFCs included the anterior and posterior renal spaces, perirenal space, great and lesser omentum, paracolic sulci, mesenteric root, and transverse mesocolon. APFCs were recorded when the diameter was > 1 cm. Gastrointestinal wall thickening was defined as the thickening and edema of the gastrointestinal wall, with wall thickness greater than 4 mm, and as robust enhancement of the mucosa with reduced enhancement of the submucosa[13,14].

As shown in the flow chart in Figure 1, 140 eligible patients were enrolled in this study. Twenty-five patients developed PSMVT (17.86%), and all the PSMVT cases were confirmed 6.19 ± 2.43 d after AP onset by contrast-enhanced CT. Supplementary Table 1 shows the demographic characteristics of all patients. The average age of all patients was 54.59 ± 15.90 years, and the study included 67 males (47.85%) and 73 females (52.14%). The PSMVT and non-PSMVT groups were matched by age, sex, AP etiology, Marshall score, systemic inflammatory response syndrome score, and acute physiology and chronic health evaluation II score. Balthazar’s CTSI score was higher in the PSMVT group than in the non-PSMVT group (7.20 ± 2.65 vs 4.63 ± 1.45, P = 0.000). 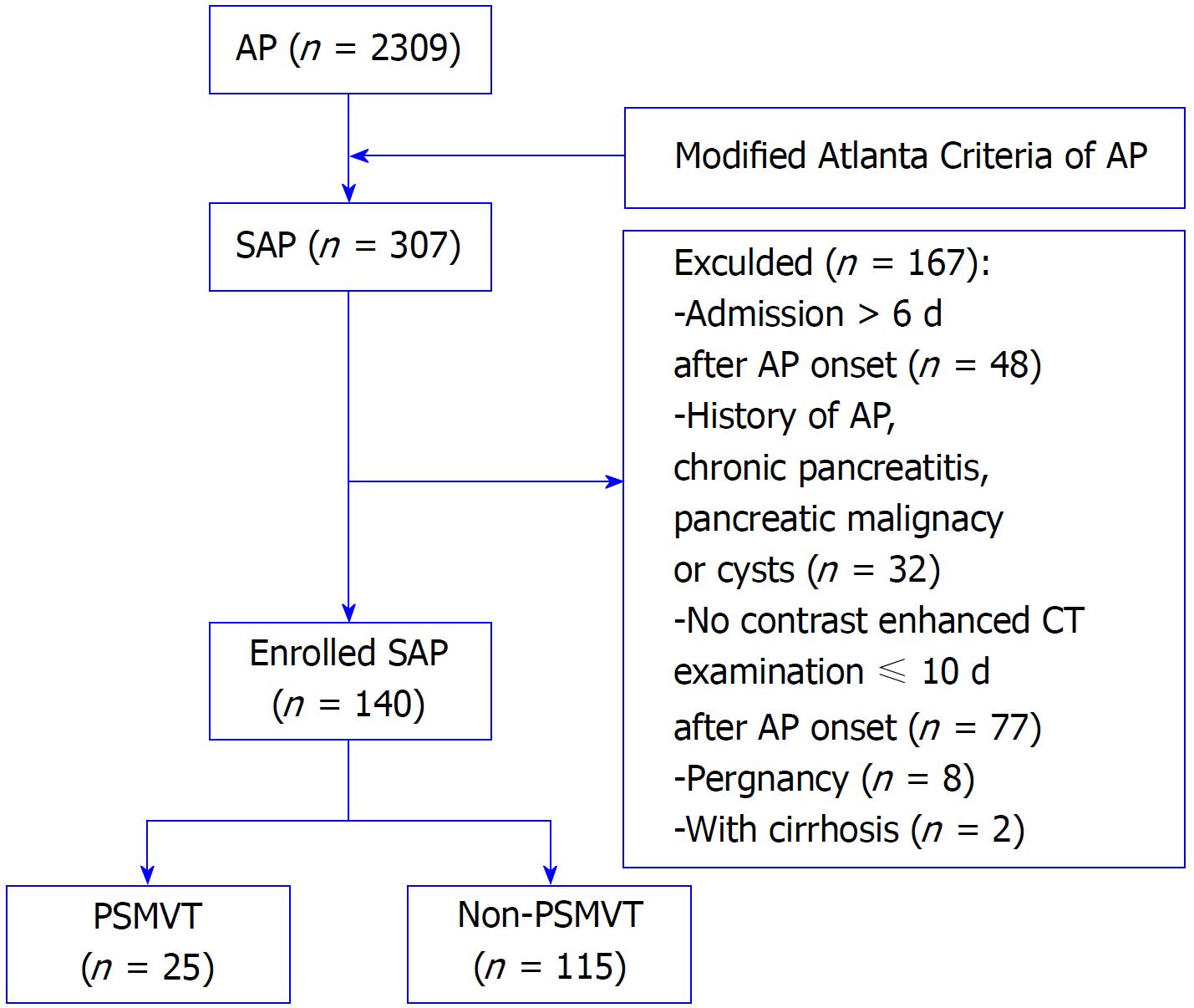 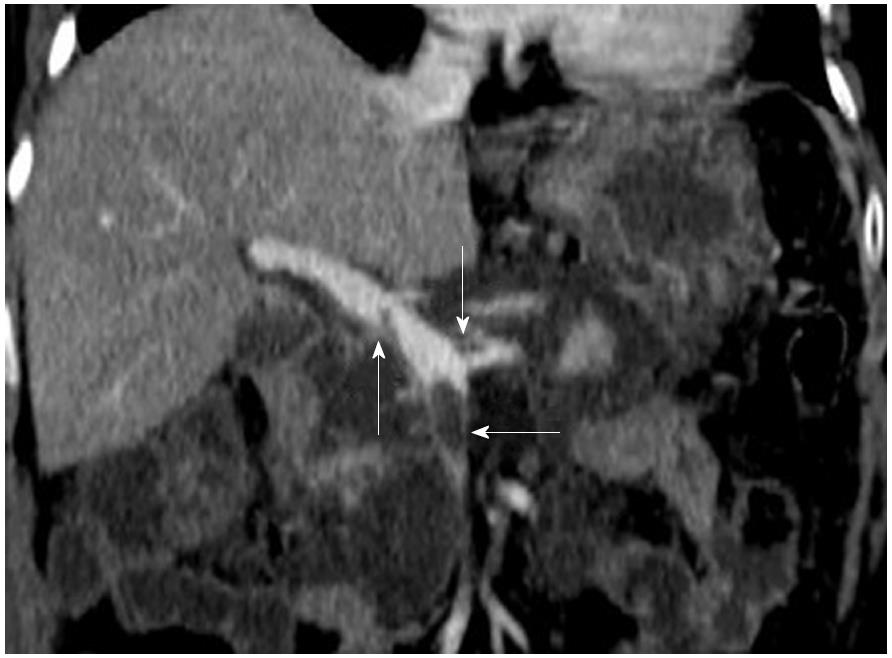 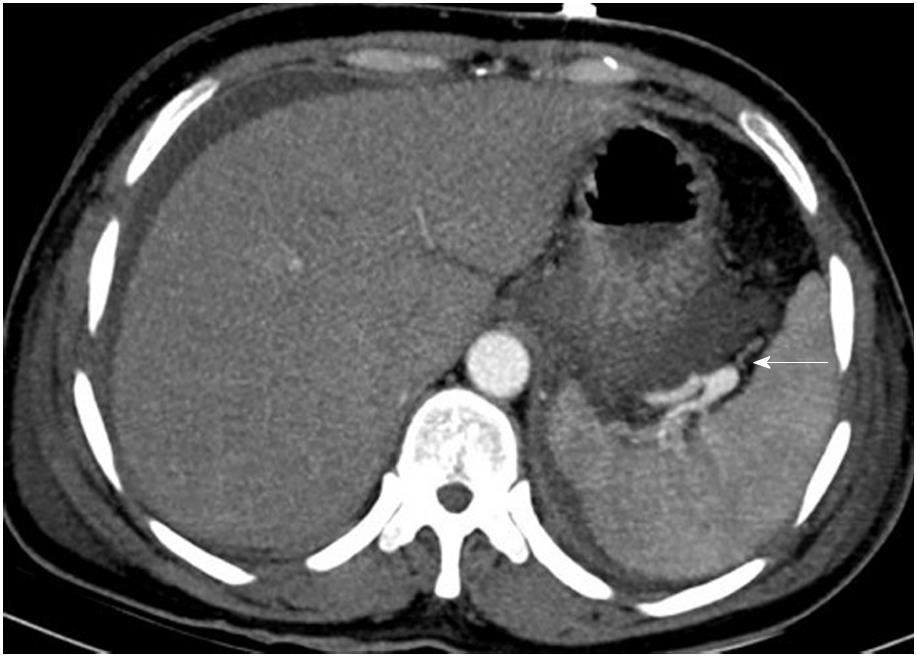 Figure 3 Pseudoaneurysm. Axial contrast-enhanced CT image in a 42-year-old female patient with severe acute biliary pancreatitis shows a pseudoaneurysm of the splenic artery (arrow), and the patient was discharged without gastrointestinal hemorrhage or intra-abdominal hemorrhage.

Supplementary Table 3 shows the relationship of a variety of clinical variables with the clinical outcomes. Twenty-one of the one hundred and forty patients (15%) died during hospitalization. Three patients experienced gastrointestinal hemorrhage. In one patient, digital subtraction angiography detected that the gastrointestinal hemorrhage was the result of the duodenal artery branch breaking; in the second patient, gastroscopy detected an acute gastric mucosal injury; and in the third patient, no reason was found. Intra-abdominal hemorrhage was detected in eight patients by abdominal CT, digital subtraction angiography, or during invasive interventions and surgical processes. Patients with PSMVT were more severely ill, as evidenced by their greater need for minimally invasive interventions, higher rates of multiple organ dysfunction syndrome, infected pancreatic necrosis, and longer durations of hospital and intensive care unit stays. 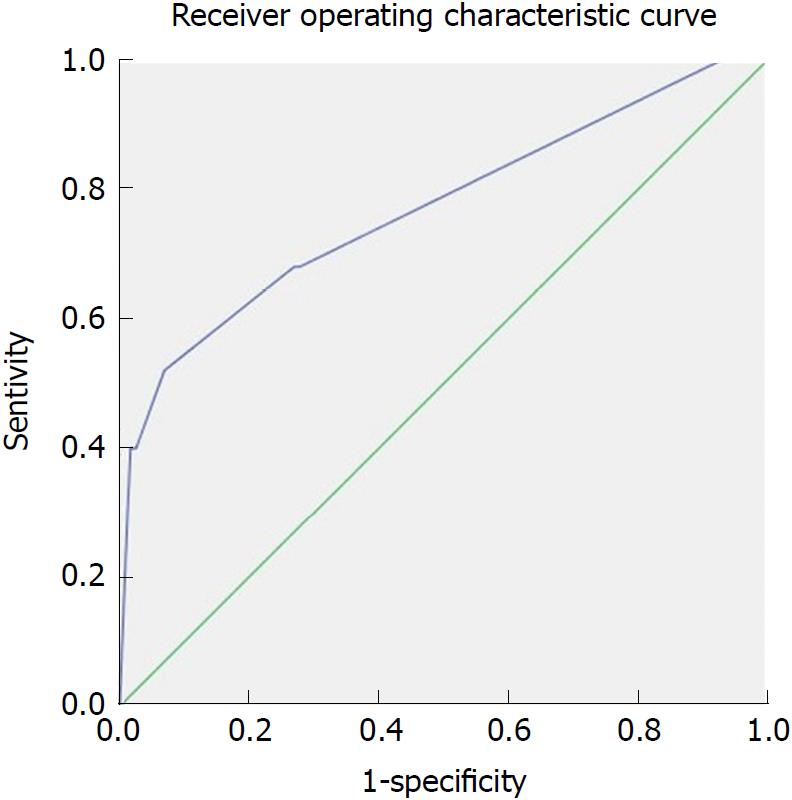 There is a lack of data on the prevalence and natural course of PSMVT in AP. It has been reported that the incidence of vascular abnormalities varies from 1.8% to 57% because of the different vascular abnormalities described, and differences in the severity of AP, and time or method of detecting vascular abnormalities[3-5,10,15-18]. In the present study, PSMVT developed in 25 of 140 (17.86%) patients with early-stage SAP. It has been reported that most PSMVTs have been clinically confirmed in the late stage of AP onset[3-5,10]. This study is the first report to focus on PSMVT occurring as early as within 10 d (average 6 d) from AP onset and to indicate that high Balthazar’s CTSI, hypoalbuminemia and gastrointestinal wall thickening are independent prognostic factors of PSMVT in the early stage of the onset of SAP.

The development of PSMVT is associated with the presence, location, and extent of pancreatic necrosis[5,19]. In contrast, some papers showed a weaker association between Balthazar’s CTSI and superficial venous thrombosis (SVT) or PSMVT in AP[3,15]. In our study, Balthazar’s CTSI was an independent risk factor of PSMVT and the area under the ROC curve for Balthazar’s CTSI score was 0.777 at a cut-off value of 5.5. The high specificity indicated that a low Balthazar’s CTSI score could be a good indicator that PSMVT would not occur. The splenic vein runs behind the tail and the body of the pancreas. Behind the neck of the pancreas, the splenic vein joins the SMV to form the hepatic PV. Necrosis could directly impact the vascular system, resulting in the formation of PSMVT. In addition, pancreatic necrosis is thought to be associated with a severe local inflammatory response and may surround the vein directly, causing impaired vasomotor function, reduced capillary perfusion, and enhanced thrombosis. However, the appropriate time for drainage is controversial, and it is recommended that drainage should be delayed until the fluid is well encapsulated or there is necrosis[20]. In our study, we found that PSMVT could form in the early stage of AP and hence, for these patients, early drainage might alleviate local inflammation and lower the risk of PSMVT.

This study revealed that gastrointestinal wall thickening was an independent risk factor for PSMVT. Gastrointestinal wall thickening is represented by the thickening and edema of the gastrointestinal wall, which means that the intestinal barrier is more vulnerable. There is speculation that intestinal bacteria and their products can infiltrate the blood circulation through the damaged intestinal barrier[26], causing severe local inflammation, which is related to venous thrombosis. The level of D-dimer is mostly used as an effective diagnostic tool to rule out deep vein thrombosis (DVT) and pulmonary embolism[27], and it has been reported to have great predictive power in the early phase of AP[28]. However, our study showed that coagulation tests including platelets, prothrombin time, activated partial thromboplastin time, fibrinogen and D-dimer were not independent risk factors in the logistic regression analysis, suggesting that coagulative disturbance may not be a direct cause of PSMVT, as reported before[3].

There were several limitations of our study. First, it was a retrospective study with a limited sample size. Second, we focused on the vascular complications during the early stage of AP; thus, whether more patients experienced PSMVT in later stages was unknown. Third, anticoagulation therapy was not included in the management protocol of PSMVT at the early stage (within 10 d after AP onset). However, when and whether anticoagulants and other treatments were given 10 d after AP onset depended on the decisions made by the attending doctors. Whether these interventions could have affected the long-term prognosis is unclear.

In conclusion, we demonstrated that the occurrence rate of PSMVT is high in SAP patients in the early stage, and high Balthazar’s CTSI scores, hypoalbuminemia and gastrointestinal wall thickening were independent prognostic factors.

The natural history of portosplenomesenteric vein thrombosis (PSMVT) was mostly reported to occur late during acute pancreatitis (AP). There is little data regarding risk factors for this complication in the early stage of severe acute pancreatitis (SAP).

We wanted to determine the potential risk factors for the development of PSMVT in SAP patients and further qualify independent risk factors.

To investigate the incidence and risk factors of PSMVT in the early stage of SAP.

Clinical outcomes and imaging measures were compared between 25 patients with PSMVT developed in the early stage of SAP and 115 patients without PSMVT. Independent risk factors were assessed by logistic regression analyses.