To investigate the relationship between the onsets of multikinase inhibitor (MKI)-associated hand-foot skin reaction (HFSR) and prognosis under intervention by pharmacists after the introduction of sorafenib.

We conducted a retrospective study involving 40 patients treated with sorafenib. Intervention by pharmacists began at the time of treatment introduction and continued until the appearance of symptomatic exacerbation or non-permissible adverse reactions. We examined the relationship between MKI-associated HFSR and overall survival (OS) after the initiation of treatment.

Core tip: Sorafenib is an oral anticancer drug associated with a high incidence of adverse reactions. However, no studies have evaluated its therapeutic efficacy under improved adherence. A surrogate marker of significant improvement in overall survival under improved adherence in advanced hepatocellular carcinoma patients after the introduction of sorafenib was multikinase inhibitor-associated hand-foot skin reaction. Intervention by healthcare providers, including pharmacists specializing in cancer treatment, has improved patient adherence, contributing to the true response to sorafenib treatment.

A surrogate marker that reflects a better prognosis after the introduction of sorafenib has not yet been established[8]. Previous studies have reported a relationship between multikinase inhibitor (MKI)-associated hand-foot skin reaction (HFSR) and TTP/OS[9-12]. Sorafenib frequently induces adverse events (AEs). The most frequent AE is MKI-associated HFSR[1-4]. Although MKI-associated HFSR is not life-threatening, its exacerbation reduces the quality of life of patients, which affects adherence to sorafenib treatments. A previous study indicated that intervention by nurses improved the efficacy of sorafenib treatments[13]; however, intervention by pharmacists who are familiar with sorafenib treatments has not yet been investigated.

The purpose of the present study was to clarify the relationship between therapeutic efficacy and MKI-associated HFSR in sorafenib-treated patients with advanced hepatocellular carcinoma. We also examined the influence of intervention by pharmacists on adherence.

This retrospective study was conducted on patients treated between May 2009 and March 2017 at our institution based on the Barcelona Clinic Liver Cancer (BCLC) strategy[14,15]. Indication criteria for sorafenib included the following: (1) Child-Pugh grade, A or B; (2) Eastern Cooperative Oncology Group Performance Status, 0 or 1; (3) hemoglobin level, ≥ 8.5 g/dL; (4) neutrophil count, > 1500/μL; (5) platelet count, > 75000/μL; (6) total bilirubin level, < 2.0 mg/dL; (7) alanine and aminotransferases, < 5-fold the upper limit of the normal range; and (8) no necessity for dialysis. Exclusion criteria included the following: (1) A history of serious hypersensitivity to the components of this drug; (2) pregnant women or those who may be pregnant; (3) a history of thrombosis or ischemic heart disease; and (4) brain metastasis. The initial dose of sorafenib was established as 200, 400, or 800 mg, but it was adjusted according to the criteria for dose reductions described in the package inserts or matters recommended by pharmacists. Administration was continued until the appearance of symptomatic exacerbation or non-permissible AEs.

Written informed consent was obtained from all subjects. The protocol of this study was approved by the Institutional Review Board of our hospital and was performed according to the Helsinki Declaration.

The treatment response was evaluated using computed tomography or magnetic resonance imaging at 8-wk intervals. Radiological evaluations were conducted based on the mRECIST criteria[16]. The National Cancer Institute Common Toxicity Criteria for Adverse Events (NCI-CTCAE) (version 4.0) were adopted to assess AEs. Patients were divided into two groups: Patients who had developed grade 1 or higher MKI-associated HFSR and those who had not.

Intervention by pharmacists and the double-check system

In the survival analysis, the significance of differences in survival between two groups with and without MKI-associated HFSR after the administration of sorafenib was tested using the log-rank test[17]. The log-rank test was also used to compare survival between two groups with and without intervention by pharmacists. In the multivariate analysis, Cox proportional hazards model was adopted[18]. Regarding the presence or absence of MKI-associated HFSR and antitumor effects, a landmark analysis[19] was conducted to minimize time-dependent bias. AE-free patients 28 d after the start of treatment, when the highest-grade MKI-associated HFSR was noted in ≥ 50% of the patients, was analyzed as a landmark.

Sorafenib treatment was evaluated in 40 patients treated between May 2009 and March 2017. The baseline characteristics of these patients are shown in Table 1. The median age was 71 years (range: 48-89 years). Thirty-nine patients (97.5%) underwent sorafenib treatment after hepatectomy, radiofrequency ablation, or transcatheter arterial chemoembolization (TACE), which was ineffective. The most frequent etiological factor for hepatitis was hepatitis C virus (57.5%), followed by hepatitis B virus (25%). Extrahepatic metastases were detected in 16 patients (40%), while tumors were localized in the liver in the other 24 patients (60%). Twenty-two patients (55%) had received intervention by pharmacists.

AEs related to sorafenib are presented in Table 2. In all patients, ≥ 1 AE was observed, but there were no grade 4 AEs. Primary AEs consisted of MKI-associated HFSR (55%), anemia (35%), hypertension (30%), anorexia (30%), and thrombopenia (30%). The grades of these AEs were evaluated as 1 in 38%, 2 in 35%, and 3 in 28% of patients. In 16 patients, treatments were postponed (definitive discontinuation) due to AEs. In 11 patients, the dose was reduced after definitive discontinuation.

The relationship between OS and MKI-associated HFSR is shown in Figure 1. The median OS was 222 d (7.4 mo) (95%CI: 175-268), range: 14-618 d). In the presence of grade 1 or higher MKI-associated HFSR, OS was significantly prolonged. The results of the univariate- and multivariate analyses regarding OS are presented in Table 3. A multivariate analysis was conducted on factors with P-values of < 0.05 in the univariate analysis. The results of the multivariate analysis showed that the presence of MKI-associated HFSR [hazard ratio (HR) = 0.241, 95%CI: 0.102-0.567; P = 0.001] and BCLC B (HR = 0.404, 95%CI: 0.170-0.964; P = 0.041) were significant predictive factors for the prolongation of OS. No significant differences were observed in the rate of decreased alpha-fetoprotein (AFP) levels in the early stage, diarrhea, or hypertension. A borderline significant difference was observed in terms of OS between patients with and without intervention by pharmacists (5.2 mo in the non-intervention group vs 9.7 mo in the intervention group, P = 0.097). The disease control rate was 33% [partial response: 1 patient (3%); stable disease: 12 patients (30%)]. 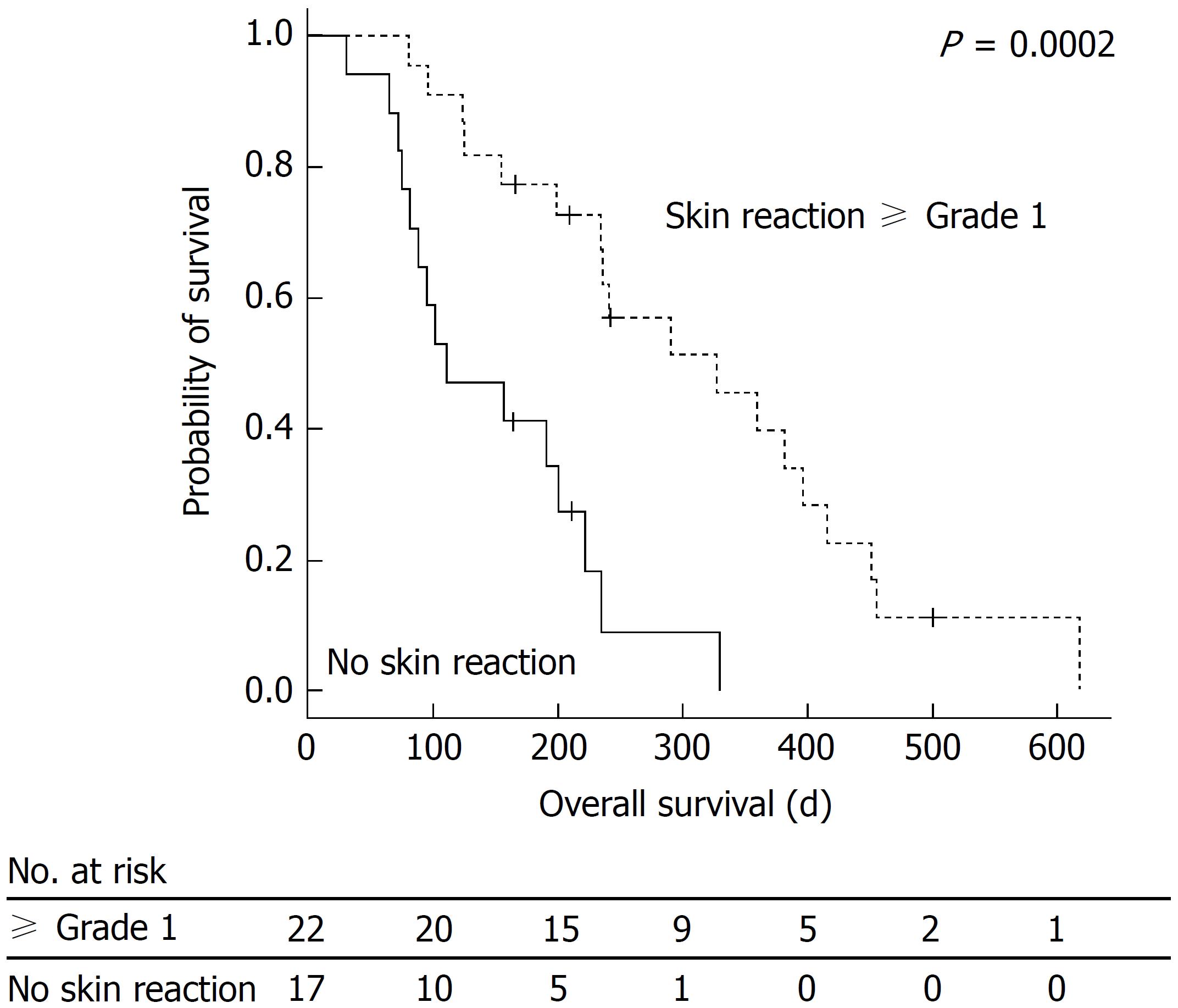 Sorafenib treatment is performed worldwide as evidence-based chemotherapy for advanced hepatocellular carcinoma[1-4]. A previous study reported that the rate of decreased in AFP levels early after the start of treatment was useful as a surrogate marker for sorafenib therapy[20]. A number of studies have indicated that a relationship exists between AEs after the start of sorafenib administration and antitumor effects; however, this relationship has not yet been confirmed. An international multicenter cooperative study showed by multivariate analysis that diarrhea, hypertension, and HFSR were significant, independent factors associated with OS[21]. In addition, a meta-analysis of the data obtained from 1017 subjects, involving 12 cohort studies, showed that HFSR was a beneficial indicator that improves the prognosis[22].

In the present study, the multivariate analysis of OS showed that MKI-associated HFSR and BCLC B were significant predictive factors for the prolongation of OS. A previous study also indicated that OS was significantly prolonged in the BCLC B group (8.4 mo in BCLC C vs 20.6 mo in BCLC B patients (P < 0.0001))[23]. In the present study, all patients previously underwent TACE, except for one patient, in the BCLC B group (15/16: 94%). Although the introduction of sorafenib for non-responders to TACE may be a good option, the timing of its introduction has not yet been established. Furthermore, a study reported that the combination of sorafenib and TACE improved the TTP[24]. We did not combine sorafenib therapy with other treatments, such as TACE; a surrogate marker for an improvement in OS was obtained by monotherapy with sorafenib. We established a double-check system consisting of primary outpatient care by pharmacists specializing in cancer treatment and secondary outpatient care by physicians. The findings indicated that MKI-associated HFSR was a surrogate marker for OS.

Regarding the TTF, the multivariate analysis showed that intervention by pharmacists and MKI-associated HFSR significantly extended the treatment duration. This finding is consistent with the findings of a previous study indicating that intervention by nurses improved the efficacy of sorafenib treatment[13].

Insufficient adherence may hinder the effects of oral anticancer drugs. If physicians responsible for prescriptions are unaware of poor adherence, they may change the regimen unnecessarily based on a misunderstanding of disease progression related to insufficient drug effects. Factors associated with non-adherence for a recommended treatment regimen include individual patient characteristics, the features of the disease and treatment regimen, and aspects of the medical care system[36]. Individual factors form a system by influencing each other, and if a patient’s disease is not regarded as a system abnormality, effective treatment may not be achieved. The time to onset of MKI-associated HFSR is much shorter than for that of HFSR induced by chemotherapy. Moreover, there is no evidence-based rationale to advocate for preventive measures for MKI-associated HFSR. Sorafenib treatment is less effective for tumor shrinkage; however, intervention by healthcare providers, including pharmacists with special knowledge, can cover these individual factors. In the present study, the median cumulative doses in the intervention and the non-intervention groups were 32200 mg and 17400 mg, respectively, showing a significant difference (P = 0.047). The MPR was significantly greater in the intervention group than and the non-intervention group, at 97% and 85% respectively, showing a significant difference (P < 0.001); intervention by pharmacists contributed to this increased adherence.

To evaluate the role of MKI-associated HFSR as a surrogate marker for therapeutic effects, we conducted a retrospective analysis involving advanced hepatocellular carcinoma patients who had received sorafenib treatment under intervention by pharmacists. The results indicated that MKI-associated HFSR was a surrogate marker for OS under increased adherence. Neither the rate of decrease in AFP levels in the early stage nor diarrhea/hypertension was a surrogate marker. Intervention by pharmacists prolonged the TTF and increased the median cumulative dose and the MPR, resulting in better adherence. A borderline significant difference was observed in terms of OS between patients with and without intervention by pharmacists. The present study had the following limitations: our data are based on a retrospective study, and the sample size was small.

A surrogate marker that reflects a better prognosis after the introduction of sorafenib has not yet been established.

The incidence of adverse events after sorafenib introduction is high, reducing drug adherence.

The authors performed intervention by pharmacists using the double-check system to improve drug adherence. In addition, they evaluated a surrogate marker reflecting a better prognosis after sorafenib introduction under increased adherence.

This retrospective study was conducted on advanced hepatocellular carcinoma patients who had been treated with sorafenib between May 2009 and March 2017. Establishing the overall survival (OS) as a primary endpoint, the authors evaluated a surrogate marker using multivariate analysis. Furthermore, the effects of intervention by pharmacists on drug adherence were assessed using the time to treatment failure (TTF), median cumulative dose, and medication possession ratio (MPR).

The subjects were 40 patients who had undergone sorafenib therapy. In the presence of grade 1 or higher multikinase inhibitor (MKI)-associated hand-foot skin reaction (HFSR), OS was significantly prolonged. The results of multivariate analysis showed that the presence of MKI-associated HFSR (hazard ratio = 0.241, 95%CI: 0.102-0.567; P = 0.001) was one of the significant predictive factors for the prolongation of OS. There were significant differences in the TTF, median cumulative dose, and MPR between the intervention and non-intervention groups.

It remains to be clarified whether intervention by healthcare providers improves the prognosis of hepatocellular carcinoma patients after sorafenib introduction. Therefore, the double-check system should be further improved, and a larger number of patients should be evaluated. Furthermore, a prospective study should be conducted.

We thank Ms. Aemono (Department of Pharmacy, Hitachi General Hospital) for her advice.