To investigate the prevalence and association of Helicobacter pylori (H. pylori) with end-stage renal disease (ESRD).

SA comprehensive literature search was completed from inception until October 2016. Studies that reported prevalence, relative risks, odd ratios, hazard ratios or standardized incidence ratio of H. pylori among ESRD patients were included. Participants without H. pylori were used as comparators to assess the association between H. pylori infection and ESRD. Pooled risk ratios and 95%CI was calculated using a random-effect model. Adjusted point estimates from each study were combined by the generic inverse variance method of DerSimonian and Laird.

Helicobacter pylori (H. pylori) is the most common chronic bacterial infection in the gastrointestinal tract of humans[1]. It has been estimated that the prevalence of H. pylori infection is up to thirty percent in adult aged 18 to 30 years and to fifty percent in those older than 60 years old[2]. Many studies demonstrated that H. pylori infection is associated with a peptic and duodenal ulcer, chronic gastritis, and gastric cancer[3,4]. Recently, epidemiologic studies have demonstrated associations between H. pylori infection and extra-gastrointestinal organ involvements including coronary artery disease, dyslipidemia, insulin resistance, and hematologic disorders[5-7].

Three investigators (Wijarnpreecha K, Thongprayoon C and Cheungpasitporn W) independently reviewed published studies indexed in MEDLINE and EMBASE database from their inception to October 2016 using the search strategy that included the terms for “Helicobacter”, “hemodialysis”, and “renal disease” as described in Item S1 in online Supplementary Data 1. A search for additional articles utilizing references from included studies was also performed. There was no confinement on language in the literature search. We conducted this systematic review following the Preferred Reporting Items for Systematic Reviews and Meta-Analysis statement.

The inclusion criteria were: (1) observational studies appraising the association between H. pylori and ESRD and prevalence in hemodialysis; (2) prevalence, odds ratios, relative risks, or hazard ratios with 95%CI were presented; and (3) individuals without H. pylori were used as comparators in cohort studies while individuals without ESRD were used as comparators in the cross-sectional and case-control studies. Wijarnpreecha K, Thongprayoon C and Cheungpasitporn W individually examined the titles and abstracts of the studies. After the first phase, the full text of the included studies was subsequently examined to ascertain if they met the inclusion criteria. Discrepancies were also settled by discussion with all investigators.

A structured data collection form was utilized to obtain the data from included studies including title of the study, year of publication, country where the study was conducted, name of the first author, demographic of subjects, method used to diagnose H. pylori, prevalence of H. pylori, effect estimates (hazard ratios, odds ratios, relative risks) with 95%CI, and factors adjusted in the multivariate analysis. To ensure the certainty, this data extraction process was reviewed by all investigators. The quality of each study was individually appraised by each investigator. We utilized the validated Newcastle-Ottawa quality assessment scale for cohort and case-control studies[43] and modified Newcastle-Ottawa scale[44] for the cross-sectional study.

MetaXL software (EpiGear International Pty Ltd)[45] was used for meta-analysis of prevalence. Otherwise, data analysis was performed using the Review Manager 5.3 software from the Cochrane Collaboration (London, United Kingdom). Adjusted point estimates from each study were combined by the generic inverse variance method of DerSimonian and Laird, which assigned the weight of each study based on its variance[46]. We used a random-effect model due to the high likelihood of between-study variance from different study designs, populations, and H. pylori testing. Cochran’s Q test and I2 statistic were used to ascertain the between-study heterogeneity. A value of I2 of 0%-25%, 25%-50%, 50%-75%, and > 75% embodied insignificant, low, moderate and high heterogeneity, respectively[47].

Of 4546 potentially relevant articles, 4466 articles were excluded due to the title and abstract not meeting inclusion criteria. Subsequently, 43 articles were excluded (6 articles were not observational studies, and 37 articles did not describe the outcomes of interest). Finally, thirty-seven observational studies (2 cohort[14,48] and 35 cross-sectional studies[12,13,16,19-42,49-56]) met all inclusion criteria. The literature retrieval, review, and selection process are shown in Figure 1. The characteristics and quality assessment of the included cross-sectional studies are presented in Table 1 while the characteristics of the included cohort studies are shown in Table 2. 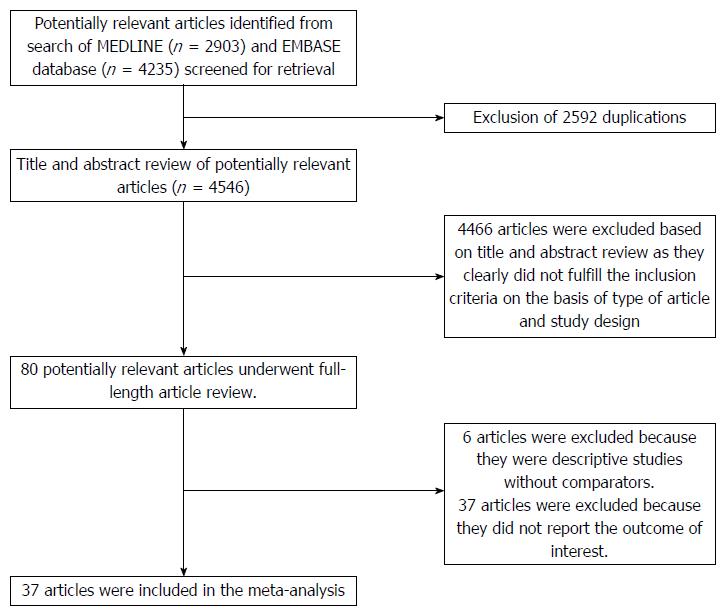 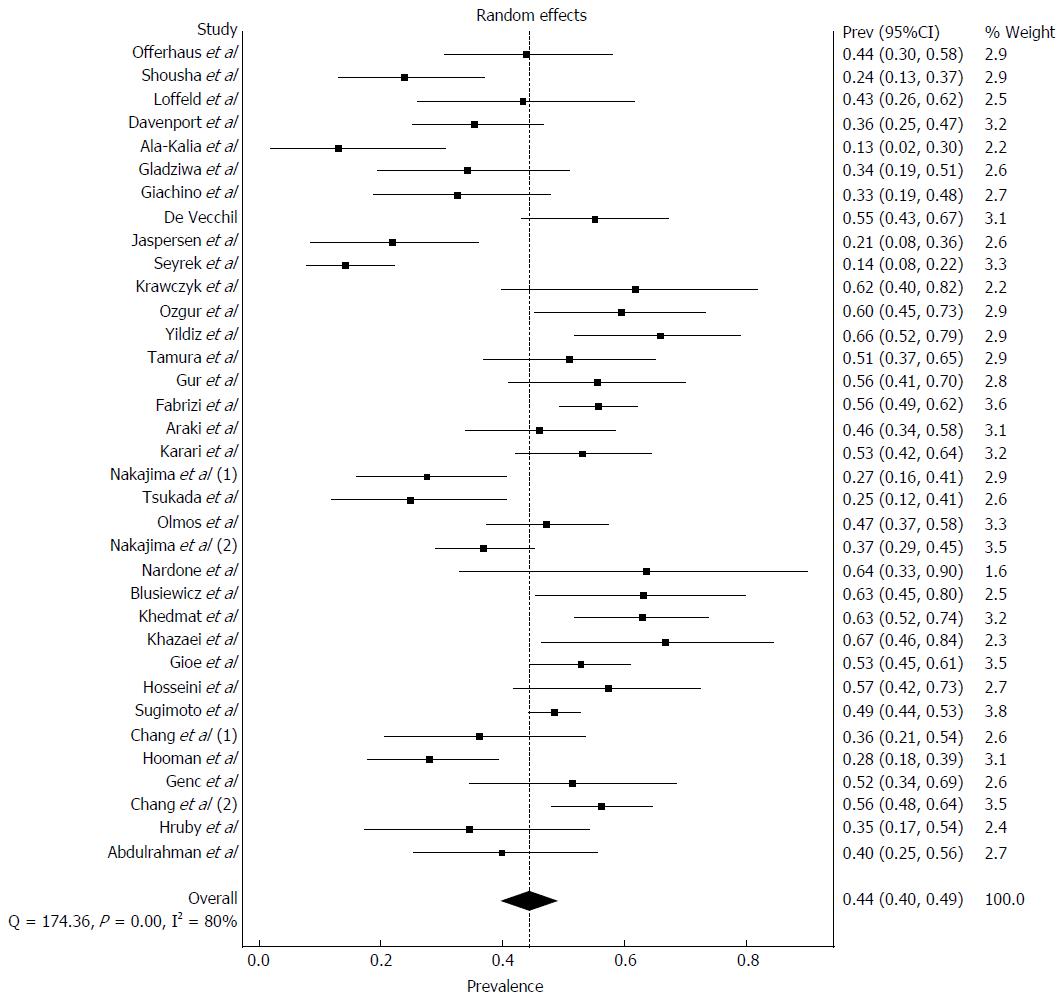 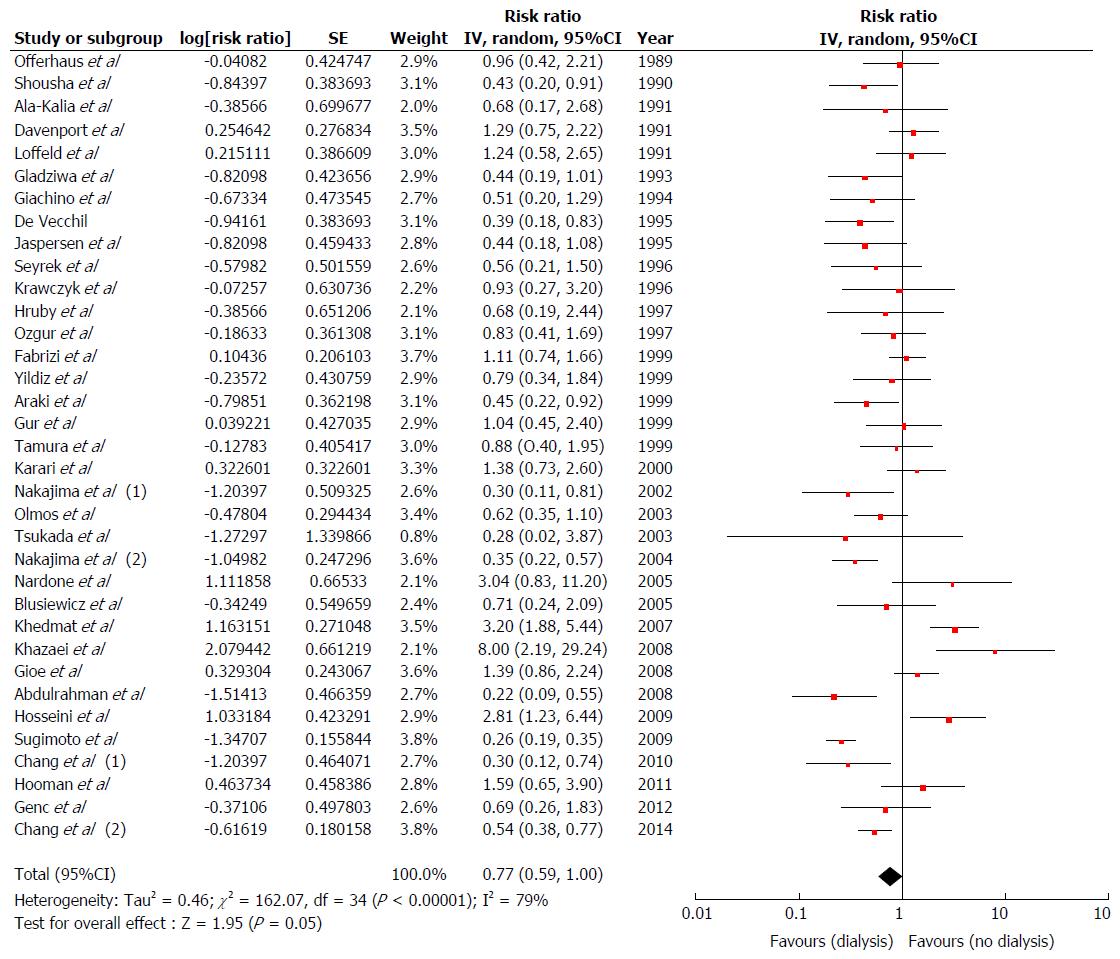 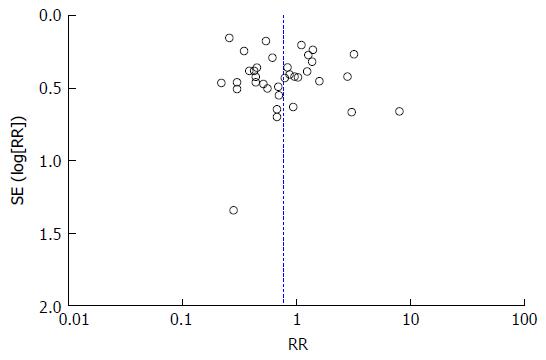 Although the precise explanation of reduced risk of H. pylori among adult ESRD patients is still unclear, there are several plausible explanations for this association. First, it has been postulated in previous studies that administering antibiotics and antacid more frequently in ESRD patients may contribute to lower the prevalence of H. pylori infection[39,53]. Previous study proposed that ESRD patients may have a lower risk of H. pylori infection from routinely used of antacids to prevent renal osteodystrophy by reducing intestinal phosphate absorption[16]. Second, patients with ESRD have higher levels of inflammatory cytokines including tumor necrotic factor, interleukin-6 and -8 from infiltrative inflammatory cells in gastric mucosa[57] and chronic circulatory failure[58,59] could lead to gastric mucosal damage and progress to gastric atrophy or atrophic gastritis, increased in gastric pH mucosa, and eventually eradication of H. pylori infection[60-62].

Although the included studies in this meta-analysis are almost of good quality, there are several limitations to this study that need to be addressed. Firstly, there was a statistical heterogeneity in the completed analysis. Possible sources of this heterogeneity include differences in confounder-adjusted methods (e.g., age, gender, ethnicity and socioeconomic status), different test to detect H. pylori infection in each study, various grades of uremia. Secondly, our subgroup analysis revealed significantly decreased the risk of H. pylori infection among adult subjects with ESRD but not in children likely due to a limitation in some studies. Although the number of study assessing H. pylori in children was limited and the insignificant finding in ESRD children could be from the lack of power, further studies are required to determine the role of aging in the underlying pathogenesis of H. pylori infection among ESRD patients. Lastly, this study is a meta-analysis of observational studies. Thus, our study demonstrated an association, but could not establish causality as unknown confounders could play a role in the association between prevalence of H. pylori among hemodialysis and association between H. pylori and ESRD.

This meta-analysis investigated the prevalence and association of H. pylori with end-stage renal diseases and demonstrated a decreased risk of H. pylori in adult ESRD patients. The context is well organized and the conclusion is of interest.