This study included 636 patients who failed first-line triple therapy and received 7 d of bismuth-containing quadruple therapy between January 2005 and December 2015. We retrospectively demonstrated H. pylori eradication rates with respect to the year of therapy as well as demographic and clinical factors. H. pylori eradication was confirmed by a 13C-urea breath test or a rapid urease test at least 4 wk after the completion of bismuth-based quadruple therapy: proton pump inhibitor, metronidazole, bismuth, and tetracycline.

The second-line bismuth-containing quadruple therapy for H. pylori infection is still effective in Korea, and diabetes mellitus is suggested to be a risk factor for eradication failure.

Patients who failed clarithromycin-containing triple therapy and received second-line bismuth-containing quadruple therapy at Kosin University Gospel Hospital from January 2005 to December 2015 were retrospectively enrolled in this study. H. pylori positivity was identified using a 13C-urea breath test or a rapid urease test before and after eradication therapy. Patients lost to follow-up were defined as patients who received the second-line bismuth-containing quadruple therapy with unknown results regarding eradication success or failure. Compliance was classified as good or poor by pill count in the medical records. Patients who took 80% or more of the prescribed medicine were included in the good compliance group, and those who took less than 80% of the prescribed medicine were placed in the poor compliance group.

We investigated demographic features: area of residence, smoking and alcohol habits, diabetes mellitus, hypertension, endoscopic findings, and adverse effects of eradication therapy. Rural or urban residence was regarded as living or not living in the metropolitan cities of Korea, respectively. All patients underwent endoscopy, and endoscopic findings [such as gastric ulcers, duodenal ulcers, gastric and duodenal ulcers, a previous endoscopic submucosal dissection (ESD) state due to adenoma or early gastric cancer (EGC), MALT lymphoma, nodular gastritis, dyspepsia, gastric polyps, and intestinal metaplasia] were identified by endoscopy or by endoscopy with biopsy. Adverse effects after eradication therapy were identified by verification in the medical records. The Institutional Review Board (IRB) of Kosin University Gospel Hospital approved this study (IRB file No. 2015-03-018).

Patients fasted for at least 4 h before the first breath sample was collected. Then, participants took tablets including 100 mg of 13C-urea (UBiTkit™, Otsuka Pharmaceutical, Tokyo, Japan) with 100 mL of water orally, and the second breath sample was obtained 20 min after taking the tablets. H. pylori infection was analyzed using the 13C-urea breath test (UBiT-IR300®; Otsuka Electronics, Osaka, Japan) on the collected breath samples. The cut-off value in the current procedure was set at 2.5‰.

To identify H. pylori infection with the rapid urease test (CLOtest®; Delta West, Bentley, WA, Australia), an endoscopic biopsy was conducted at the gastric mucosa. The site of gastric mucosal biopsy was antrum and/or corpus, and normal or near-normal gastric mucosa with little atrophy or intestinal metaplasia was removed. The tissue sample was immersed in rapid urea reagent. The result was positive when the reagent color changed from yellow to red at least 12 h later, and the result was negative when there was no change in reagent color.

All statistical analyses were conducted with the Statistical Package for the Social Sciences software version 20.0 (SPSS, Chicago, IL, United States). The H. pylori eradication rate was demonstrated by intention-to-treat (ITT) and per-protocol (PP) analyses. The trend in H. pylori eradication rates was analyzed with linear association. Patients lost to follow-up or those with poor compliance were excluded when we performed the PP analysis and univariate and multivariate logistic regression analyses. Categorical variables were analyzed using a χ2-test, and continuous variables were analyzed using the Student's t-test. Univariate and multivariate logistic regression tests were used for the analysis of risk factors, which were expressed as an OR and 95%CI. A P value < 0.05 was considered statistically significant. 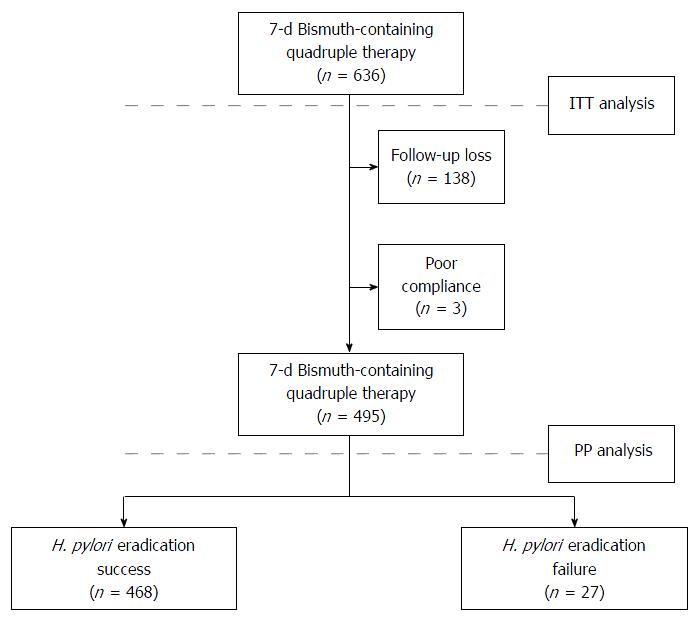 Of the 495 patients, 74 patients (14.9%) complained of adverse events after bismuth-based quadruple therapy; fortunately, the adverse events were mild or moderate. Adverse events possibly related to treatment were diarrhea in 16 patients (3.2%), bloating or abdominal pain in 22 patients (4.4%), nausea or vomiting in 26 patients (5.3%), and others (such as myalgia, headache, and bitter sensation in the mouth) in 10 patients (2.0%; Table 2).

In terms of adverse effects, most patients in the current study complained of gastrointestinal symptoms including nausea, vomiting, bloating, abdominal pain, or diarrhea. The symptoms were well tolerated, and no serious adverse events were observed. Only one patient wanted to be hospitalized for supportive care due to nausea. With regard to neurologic symptoms, three patients complained of headache or dizziness, but the symptoms were mild. Severe neurological symptoms, such as bismuth-related encephalopathy, were not observed[11,16,17]. In accordance with previous studies, bismuth-containing therapy for the eradication of H. pylori is considered safe and well tolerated[9,18].

Several factors have been postulated as the cause of eradication failure, including age, gender, smoking, alcohol, and specific drug history (e.g., aspirin)[6,19-22]. However, there was no significant relationship between these factors and eradication failure in the current study, except for diabetes mellitus. Diabetes mellitus has been presumed to be a risk factor for H. pylori eradication failure based on a recent meta-analysis (RR = 2.19, 95%CI: 1.65-2.90)[23]. It is hypothesized that microcirculatory complications related to diabetes mellitus could induce gastroparesis and reduce the absorption of antibiotics into the gastric mucosa, thereby influencing the effect of eradication therapy[24,25]. In addition, drug binding was revealed to be decreased by glycosylation, which was presumed to be associated with levels of blood glucose[26]. Concerning antibiotic resistance, the frequent use of antibiotics might increase antibiotic resistance[23,27]. A recent Danish nationwide cohort study found that the rates for community-based antibiotic prescriptions were higher in patients with diabetes mellitus compared to the general population[28]. Therefore, a more careful choice of H. pylori eradication therapy is needed for patients with diabetes mellitus.

Limitations of the present study are that it was performed at a single center and many patients were lost to follow-up, which might have influenced results of the ITT analysis. In addition, antibiotic susceptibility tests were not conducted in this study. Culturing H. pylori is difficult, and the response rates for antibiotic susceptibility tests are relatively low. Therefore, this was hard to inspect in all enrolled patients, and there were no standard criteria for identifying antibiotic resistance[9]. Furthermore, we did not diagnose H. pylori by histology before and after eradication therapy, as most patients underwent the 13C-urea breath test or the rapid urease test for confirmation of H. pylori presence before and after therapy. These limitations could affect the eradication rate. According to the manufacturer, sensitivity and specificity of the rapid urease test were 90% to 95% and 95% to 100%, respectively. A recent meta-analysis reported that sensitivity and specificity of the 13C-urea breath test were 95% to 97% and 91% to 94%, respectively, and that this test only rarely provided false-positive results[29-32]. We found that eradication rates based on the 13C-urea breath test and the rapid urease test were 95.1% (327/344) and 93.4% (141/151), respectively (P = 0.519). Therefore, there was no significant difference between the two methods. The accuracy of both tests is high and very practical for clinical use[33], thus the absence of histology is unlikely to have had a significant effect on this study.

Helicobacter pylori (H. pylori) has been classified as a definite gastric carcinogen (group I) by the International Agency for Research on Cancer. Therefore, H. pylori eradication is important to protect public health, especially in areas with high H. pylori prevalence. However, the eradication rate for proton pump inhibitor (PPI)-containing triple therapy has decreased worldwide, and an effective rescue treatment is needed.

This retrospective study’s design and findings may be helpful for planning further prospective studies on a larger scale which can evaluate the effects of second-line bismuth-containing quadruple therapy and clarify additional risk factors for eradication failure.

This is a well-designed, although retrospective study including a high number of patients. The methods used are appropriate, the statistics is sound. The difference between intention-to-treat and per-protocol eradication rates reflects the real life, while a proportion of patients lost to follow up is high.