To gain knowledge of xanthelasma, a large population-based study was conducted.

Gastric xanthelasma, characterized by lipid accumulation in histiocytic foam cells, was a relatively scarce endoscopic finding, with prevalence varied from 0.8% to 7% in different study population[1-3]. As is frequently observed in the gastric mucosa of patients with early gastric cancer, xanthelasma was assumed to be a predictive biomarker or pre-tumorigenesis change of gastric adenocarcinoma[1,4]. But there is no large descriptional study among Chinese population.

Mechanism of xanthelasma was unknown. Early small sample studies have showed relationship between xanthelasma and Helicobacter pylori (H. pylori) infection[5,6]. Later on, a Korean cohort further supported this finding, indicating a role of H. pylori as well as inflammation in xanthelasma[2]. As these countries were high H. pylori prevalent places, till now, whether H. pylori infection was result of or just casual finding in xanthelasma was not clear, neither was the association between chronic inflammation and xanthelasma.

As xanthelasma was defined as lipid deposit in stomach, its relevance to metobolic disorders was of great interest. Etiologically, these conditions may be associated with a primary dyslipoproteinemic state, such as diabetes, nephrosis, obesity or cholestasis. In two Korean studies, dyslipidemia, representative of lower mean high density lipoprotein (HDL)-cholesterol and higher mean triglyceride levels was found in gastric xanthelasma subjects in comparison with the controls, accompanied with higher body mass index (BMI)[2,7]. But, there were no reports regarding xanthelasma and metabolic factors in Chinese population yet.

So, herein, we conducted a large retrospective study in China. General aspects of xanthelasma were described, including clinical aspect, endoscopic and histological findings. Furthermore, we focused on relationship between xanthelasma and metabolic disorders, as well as inflammation property.

This study was performed among adults who underwent upper gastrointestinal endoscopy at the First Affiliated Hospital, College of Medicine, Zhejiang University, Hangzhou, China during Jan., 2009 to Nov., 2016. Endoscopic xanthelasma group was defined as patients with xanthelasma as one of their endoscopic findings. Biopsy-proven xanthelasma were those who did biopsy at suspicious xanthelasma lesion and histological staining showed typical foam cells which supported diagnosis of xanthelasma.

The study protocol was approved by the Hospital Ethics Committee and performed in accordance with Declaration of Helsinki. All persons gave their informed consent prior to their inclusion. Patients with history of gastric cancer, gastrectomy, proton pump inhibitor use within the last 2 wk, antibiotics use within the last 4 wk, poor general condition not suitable for prolonged procedure time, and surveillance or inability to give informed consent were excluded.

Procedure of upper gastrointestinal endoscopy was described in previous study[11]. Two endoscopists worked together on each patient during the whole procedure including biopsy. For controversial or non-classifiable cases, consensus was reached by discussion with one or more senior endoscopists. Gastric antrum was routine biopsies site. Additional biopsy were collected where lesion was found. The biopsy samples were fixed in formalin and sent to pathology laboratory in two separate vials, labeled according to their demographic data and anatomic sites.

Histology of each specimen was determined by two experienced pathologists independently, who were blinded to endoscopic findings. Procedures and definitions of different lesion were described in previous reports[11,12].

Foamy cells were typical histological findings and diagnostic prior criteria of xanthelasma[2]. The histologic appearance of lipid islands was described as lamina propria occupied by large ovoid to polygonal histiocytes with an abundant, finely vacuolated (foamy) cytoplasm staining lightly with eosin. Nuclei of foam cell were regular, round to ovoid, and occupied a small portion of cell area. Intestinal metaplasia was characterized by presence of histologically typical goblet cells. Grade of intestinal metaplasia was classified according to goblet cell density (low for 1-10, medium for 10-50 and high as > 50 goblet cells per low power field). If any inconsistence of two pathologists, the biopsy specimens were assessed by a third experienced pathologist, and the final diagnosis was based on diagnosis of the majority.

Among all patients with xanthelasma, 24.2% complained of abdominal pain, 9.1% visited hospital for dyspepsia, 10.1% came with abdominal distention, and 14.1% for up-abdominal discomfort. Other symptoms like constipation, regurgitation, and diarrhea were seen in minority. 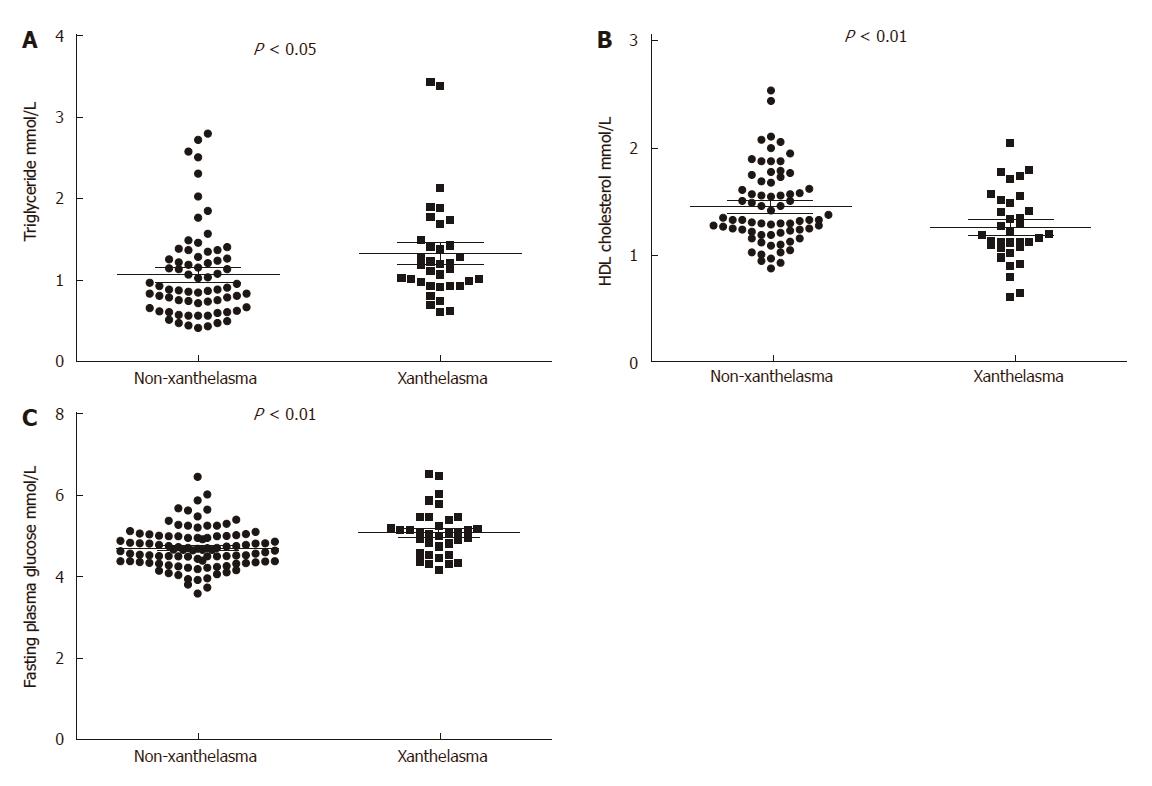 No significant disparity was seen in liver enzyme, including ALT, AST, ALP and GGT. Other factors, such as total bilirubin, albumin and serum uric acid were not different in two groups. 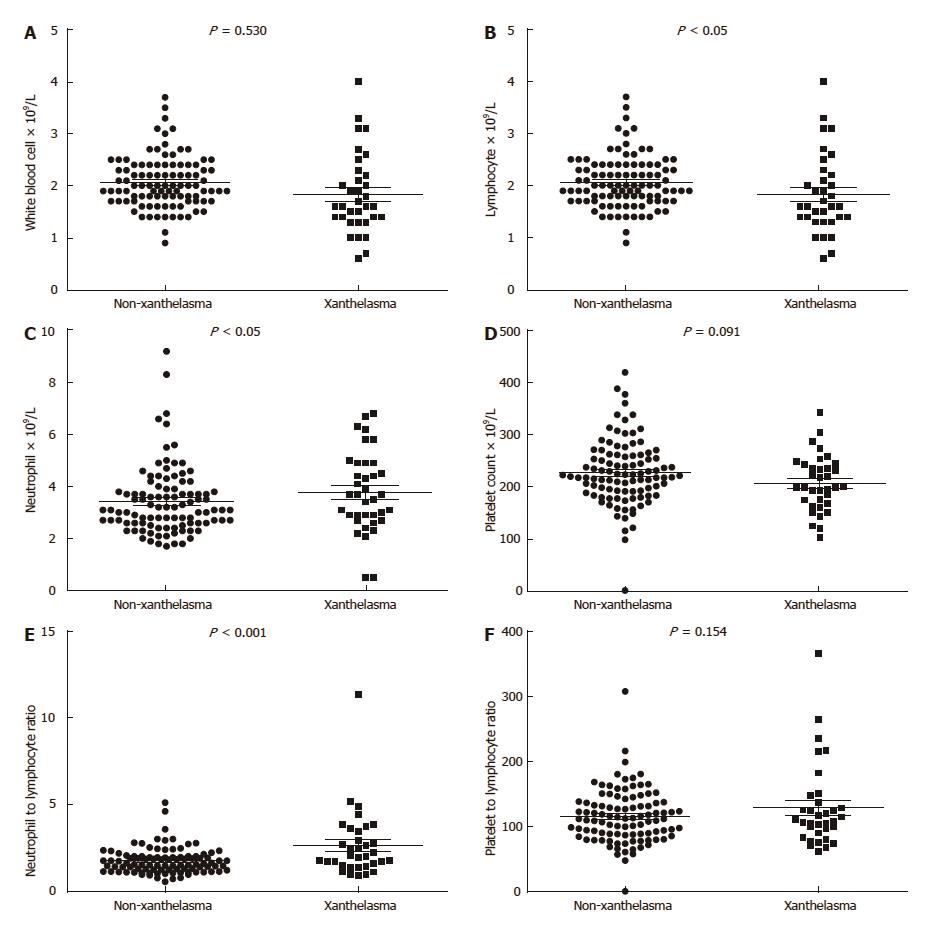 Current study was the first populational based cohort of xanthelasma in China. This retrospective study collected a large xanthelasma group in Chinese population. Prevalence of endoscopic xanthelasma was 0.78% in our cohort with average age of 56.6 ± 11.2. Reasons of hospital visiting included abdominal pain (24.2%), up-abdominal discomfort (14.1%), abdominal distention (10.1%), and dyspepsia (9.1%), et al. Xanthelasma was most frequently seen in antrum as a single lesion. Chi-square analysis revealed positive relationship between prevalence of xanthelasma and H. pylori infection rate, more atrophy, intestinal metaplasia, dysplasia respectively. Metabolic and inflammatory factors were found associated with xanthelasma, as with higher CEA, TG, fasting glucose, neutrophil, NLR index, fatty liver comorbidity and lower HDL-cholesterol, lymphocyte. Among all these factors, fasting plasma glucose, neutrophil, and CEA were proved to be independent factors in xanthelasma.

Current analysis revealed co-existence of atrophy, intestinal metaplasia and dysplasia in xanthelasma, indicating a potential pro-tumorigenesis role in gastric pathology. In previous prospective study, age/sex/atrophy-matched control analysis demonstrated that the presence of gastric xanthelasma was signiﬁcantly associated with the presence of gastric cancer, indicating that xanthelasma could serve as a warning sign of gastric cancer[4]. Furthermore, in a Japanese cohort, with follow-up being more than three years, gastric xanthelasma was shown to be a useful marker for gastric cancer development[1]. Other than endoscopic diagnosis of gastric cancer, serum CEA level in xanthelasma group was significantly elevated. The exact mechanism behind this remained unknown. But it was speculated that reactive oxygen species (ROS) might be the mediator. First, increased release of ROS may be involved in accumulation of oxidized LDL cholesterol and development of gastric xanthelasma[14]. On this basis, ROS can cause DNA damage and associated oncogenic changes, thus lead to tumorigenesis[15,16]. However, molecular and cell biology experiments were needed to support the idea.

This study identified a slightly higher H. pylori infection rate in gastric xanthelasma. Recent years witnessed rapid increase rate in infection, especially in China[17]. As high as 57.6% people in population carried H. pylori[18]. H. pylori is a well-known cause of various gastrointestinal issues, such as peptic ulcer disease, gastroesophageal reflux disease and chronic active gastritis as well[19]. Chronic gastritis is thought to be involved in gastric glandular atrophy and intestinal metaplasia, which is considered as a precursor of gastric tumorigenesis[20]. In consistent with our findings, Hori and Tsutsumi first reported that H. pylori infection was seen on the surface of foveolar cells in 48% of biopsy samples of xanthelasma in 1996[5]. To further support that, Isomoto, in 1999, also reported a close relationship among H. pylori infection, xanthelasma, and atrophic gastritis[6]. Similarly, a large cohort in Korea also identified this association and proposed that xanthelasma may be provoked by H. Pylori infection[2].

In order to better understand role of chronic inflammation and xanthelasma, this study also investigated relationship between serum inflammatory biomarkers and xanthelasma, which revealed an increasing trend of neutrophil and a decrease in lymphocyte with negative relationship of CRP, an acute phase protein. Moreover, NLR index, defined as neutrophil counts divided by lymphocyte counts, was introduced. In most cases, lymphopenia well reflects impaired cell-mediated immunity, while neutrophilia represents a response to systematic inflammation, so high NLR represents systemic and local inflammatory state[21]. Emerging evidences have shown an important role of NLR in different cancer types and metabolic disease such as cardiovascular disease as well[22,23]. These results further supported an inflamed environment in xanthelasma.

Xanthelasma was characterized by deposit of lipid in gastrointestinal tract. In this study, we found a positive association between xanthelasma and serum TG level accompanied by decreased HDL cholesterol. As a major component in metabolic syndrome, fatty liver was seen more frequent in xanthelasma patients. Glucose metabolism was also impaired in xanthelasma, supported by significantly higher fasting plasma glucose. However, Hb1Ac did not differ between groups. This indicated a scenario of slight fasting glucose intolerance, rather than well-established diabetes. Moreover, the amount of epicardial adipose tissue found in subjects with xanthelasma was higher and, the presence of xanthelasma was independently associated with supramedian epicardial fat thickness[24]. Whether these were random findings or potential causal relationship in pathogenesis still need further studies.

However, this study has several limitations. Firstly, with the nature of retrospective case-control study, no causal relationship can be identified between either xanthelasma and other gastric pathology or xanthelasma with metabolic disorders. Further prospective studies are needed in this concern and in other groups to improve generalizability. Secondly, as was a retrospective study, no standard procedure of xanthelasma treatment was set. Difference might existed among endoscopists. Rate of xanthelasma biopsy would be underestimated.

Xanthelasma was a relatively rare endoscopic finding, characterized by accumulation of lipid in histiocytic foam cells in mucosa. To gain knowledge of xanthelasma, a large population-based study was conducted.

As xanthelasma was defined as lipid deposit in stomach, its relevance to metobolic disorders was of great interest. Dyslipidemia, representative of lower mean high density lipoprotein-cholesterol and higher mean triglyceride levels was found in two Korean studies, accompanied with higher body mass index in gastric xanthelasma subjects in comparison with the controls. But, there were no reports in this concern in Chinese population yet.

With better understanding of xanthelasma pathogenesis and its relationship with metabolic, immunogenic and carcinogenic factors, clinical value of xanthelasma as predicting factor will be envisaged.