To investigate the clinical utility of biological age (BA) measurement in screening colonoscopy for the detection of colorectal adenomas in the average-risk population.

A consecutive series of asymptomatic subjects aged ≥ 30 years who underwent colonoscopy in routine check-ups were enrolled. Colorectal adenoma was classified according to size, number, and location. BAs were calculated using the MEDIAGETM Biological Age Measurement System.

Measurement of BA may help to assess the risk of colorectal adenoma in screening colonoscopy.

Colorectal cancer (CRC) is one of the most common malignancies and a leading cause of cancer mortality in the world[1,2]. Colonoscopy is effective for detecting adenomatous polyps, and colonoscopy with polypectomy has been shown to significantly reduce the expected incidence of CRC by 76%–90% in multiple cohort studies[3,4].

The guidelines of the American Society of Gastrointestinal Endoscopy for colorectal cancer screening and surveillance recommend that screening colonoscopy should begin at the age of 50 for average-risk individuals[5,6]. The current cutoff age is based mainly on the fact that the incidence of CRC begins to rise during the 6th decade of life[7]. However, given the long lead time associated with adenoma-to-carcinoma progression, the increased number of CRCs diagnosed in this age group may reflect the end result of adenomas present in individuals under 50 years old[6]. In fact, nearly 1 in 15 of CRCs develops in adults under 50 years of age[8]. Therefore, reasonable guidelines for performing screening colonoscopy for colorectal cancer should be proposed for the average-risk population.

Aging is a highly individual process, and has a high degree of inter-individual and between-individual difference[9]. Chronological age (CA) is the age as determined by the passage of time since birth. However, biological age (BA) is determined by physiology rather than chronology[10]. As CA does not accurately reflect the functional state of the body, it does not provide an accurate indication of the aging process[11,12]. CA and BA may differ significantly, since both genetics and the environment contribute to BA[10]. Individuals might be healthier, more vital, and biologically younger than might be expected from their CA, and vice versa[13].

If subjects with an average risk of colon cancer undergo colonoscopy according to BA, colon cancers may be prevented by colonoscopy with polypectomy for colorectal adenomas and premalignant lesions at the optimal age of life. Thus, it is necessary to stratify the risks and identify high-risk groups in a specialized manner. In addition, there might be a rationale by which to recommend screening colonoscopy for early cancer detection and prevention besides CA determination.

To date, no worldwide studies have been conducted to estimate the clinical application of BA as a new indicator in CRC screening. Hence, we intended to assess the risk for colorectal adenomas in the average-risk population from the biological perspective. Therefore, the aim of the present study was to investigate the clinical utility of BA measurement in screening colonoscopy for the detection of colorectal adenomas in the average-risk population.

We conducted this study on a consecutive series of asymptomatic subjects ≥ 30 years of age who underwent colonoscopy during a routine check-up at the Health Promotion Center of Bundang Jesaeng Hospital in Gyungki-do, South Korea between August 2011 and August 2012. The exclusion criteria were a history of colonic disease, such as CRC, polyps, and inflammatory bowel disease, and a history of colorectal surgery or colonoscopy within the previous 10 years. Information regarding age, sex, medical history of diabetes mellitus and hypertension, and family history of colon cancer was collected from a standardized questionnaire. The study was approved by the Institutional Review Board of the Bundang Jesaeng Hospital in Korea (IMG 15-04).

BAs were calculated as described previously using models for predicting BA (MEDIAGETM Biological Age Measurement System, MEDIAGE Research Center, Gyeonggi-do, South Korea)[14,15]. This measurement system has been used as an adjunctive measure for easily predicting individual differences in health and aging status with the use of clinical parameters that are commonly used at many health check-up centers in South Korea.

Based on the ATP III-WPRO (Regional Office for the Western Pacific Region of WHO) definition according to the WPRO criteria, metabolic syndrome (MS) was defined as the presence of three or more of the following[16]: (1) abdominal obesity, waist circumference > 90 cm in men and > 80 cm in women; (2) hypertriglyceridemia, ≥ 150 mg/dL; (3) low high-density lipoprotein cholesterol level, < 40 mg/dL in men and < 50 mg/dL in women; (4) high blood pressure, ≥ 130 mm Hg systolic or ≥ 85 mm Hg diastolic; and (5) high serum fasting glucose level, ≥ 110 mg/dL.

We performed colonoscopies that reached the cecum after bowel preparation with 4 L of Colyte powder (TAEJOON PHARM Co., Ltd., South Korea). The Colyte powder was composed of polyethylene glycol (3350.29 g), anhydrous sodium sulfate (2.85 g), sodium hydrogen carbonate (0.84 g), sodium chloride (0.73 g), and potassium chloride (0.37 g). We examined colonoscopic features, including the size, location, number, and histologic findings of polyps. Polyp size was assessed using open colonoscope biopsy forceps (MTW-Endoskopie Manufaktur, Wesel, Germany). Adenoma size was classified into < 10 and ≥ 10 mm (the largest size was used for multiple adenomas). The location of colorectal adenomas was divided into three categories: the proximal colon, including the cecum, ascending colon, and transverse colon; the distal colon, including the splenic flexure, descending colon, sigmoid colon, and rectum; and both sides of the colon. The number of adenomas was classified as either single or multiple (≥ 2). Histological findings were classified according to their premalignant potential: colorectal adenomas included tubular, villous, or serrated adenomas; and controls had normal colonoscopic findings and non-polypoid benign lesions such as non-specific colitis or histologically confirmed hyperplastic polyps. In addition, advanced adenomas were defined as ≥ 1 cm in estimated diameter, containing ≥ 25% villous features, and/or high-grade dysplasia.

We identified a total of 2699 subjects in the study period. Among them, three with colorectal carcinoma were excluded. Thus, the study population consisted of 2696 subjects. The demographic and clinical characteristics of the enrolled subjects are summarized in Table 1.

The prevalence of overall colorectal adenoma was 23.1% (622/2696). The colonoscopic findings of the subjects according to location, size, and number are summarized in Table 2. 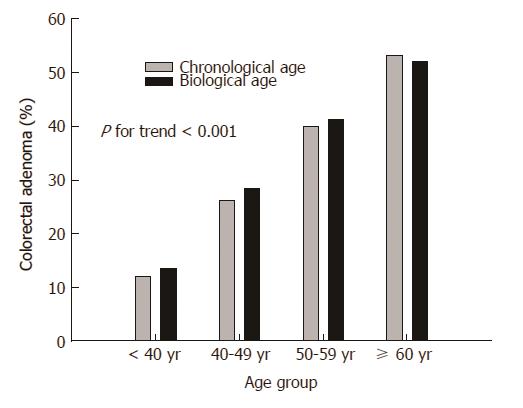 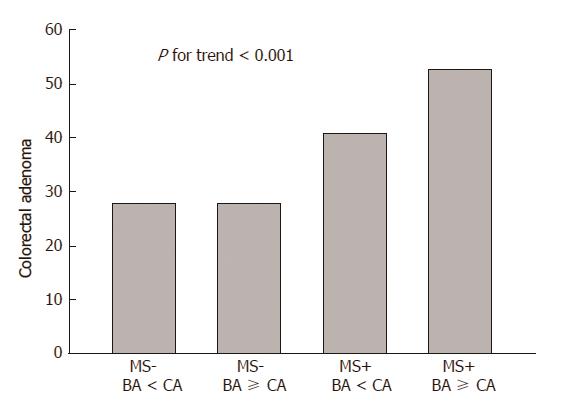 Aging in humans refers to a multidimensional process of physical, psychological, and social changes that occur from birth[14]. Aging is usually assessed in terms of the CA, which is defined as the time elapsed since birth. However, CA fails as an accurate indicator of the aging process[17]. BA estimates the functional status of an individual with respect to their chronological peers on the basis of how well they function in comparison with others of the same CA[18]. Different individual rates of aging lead to differences between CA and BA, and individual values of BA can therefore vary widely at any given CA and are ultimately expected to correspond to the inter-individual variations in longevity and timing and/or magnitude of sequelae of the aging process[19,20]. It has been proposed that BA may serve as an indicator of an individual’s general health status, remaining healthy life span, and active life expectancy[21]. Considering that BA corresponds well with the aging process, BA may be a good indicator for starting screening colonoscopy at the most biologically optimal time in an individual’s life. If so, CRC may eventually be preventable using colonoscopy with polypectomy for premalignant lesions.

Many previous studies have revealed that colorectal adenoma is associated with MS. The clinical characteristics of MS, such as obesity, dyslipidemia, and insulin resistance, have been linked to an increased risk of CRC in several studies[16,22]. In this study, the subjects with MS had more colorectal adenomas compared to those without MS (44.9% vs 27.8%, P < 0.001). In particular, the prevalence of colorectal adenoma was increased along with MS and BA-dominance (P < 0.001) (Figure 2).

In this study, the prevalence of MS increased proportionally with BA compared with CA. This suggests that MS is related to BA more than to CA because the metabolic change is associated with aging. Soprano et al[23]. reported that MS can be considered an age-related disease by identifying a correlation between MS and aging. In addition, they highlighted aging-related dysfunctions that contribute to the onset of several metabolic diseases[23]. Therefore, physiological disorders such as MS should be measured based on BA rather than CA.

Based on these results, BA deserves attention as an alternative indicator for screening for various cancers including CRC. Interestingly, the prevalence of colorectal adenoma in subjects aged < 50 years was as high as 19.9% (329/2696) in this study. Hence, the commencement of screening colonoscopy should be determined based on BA and physiological criteria rather than indiscriminately at 50 years of CA. This strategy will help in identifying those at risks of CRC at an early stage (before the age of 50 years).

This study was limited because the study population, who voluntarily attended health screening, may have been individuals more concerned about their health than average and trying harder to maintain their health than members of the general population. As a result, the age gap between BA and CA was not as large as expected. Therefore, further studies targeting members of the general population are needed in the future.

The present study highlights the important implications for the future planning of CRC screening in that the higher prevalence of BA-dominance was observed in subjects with colorectal adenoma. It should be emphasized that long-term prevention of both colorectal adenoma along with the biological aging process is of clinical importance.

In conclusion, measurement of BA may help to assess the risk of colorectal adenoma in screening colonoscopy. In particular, careful colonoscopic examination in the distal colon should be performed in BA-dominant individuals.

Current guidelines for colorectal cancer screening are based on chronological age (CA) of 50 years. However, a significant number of colorectal cancers have been found even under 50 years of age. Therefore, screening colonoscopy at a more reasonable age may be necessary from the biological perspective.

The authors investigated the clinical utility of biological age (BA) measurement in screening colonoscopy for the detection of colorectal adenomas in the average-risk population.

The present study demonstrated that the prevalence of colorectal adenoma correlated well with BA, and was more common in the distal colon in BA-dominance. Furthermore, the incidence of metabolic syndrome correlated more precisely with BA compared with CA.

Measurement of BA may help to assess the risk of colorectal adenoma in screening colonoscopy. In particular, careful colonoscopic examination in the distal colon should be performed in BA-dominant individuals.

BA is determined by physiology rather than chronology. BA estimates the functional status of an individual with respect to their chronological peers on the basis of how well they function in comparison with others of the same CA.

The author aimed to investigate the clinical utility of BA measurement in screening colonoscopy for the detection of colorectal adenomas in the average-risk population. The present paper is indeed interesting.