Neurological features in celiac disease (CD) are not rare (5%-36%), but tremor is scarcely described. Subjects with CD and healthy controls completed an online survey using WHIGET tremor rating scale. One thousand five hundred and twelve subjects completed the survey, finally 674 CD patients and 290 healthy subjects were included. A higher prevalence of tremor in CD patients was observed in comparison to controls (28% vs 14%, P < 0.001). Frequency of family history of tremor in CD patients with and without tremor was 25% and 20% (P = 0.2), while in the control group it was 41% and 10% (P < 0.001). Controls with tremor showed a higher frequency of family history of tremor when compared to CD patients with tremor (41.5% vs 24.6%, P = 0.03). The results suggested that tremor in CD might be more frequent and possibly related to the disease itself and not due to associated essential tremor.

Core tip: We performed an online inquest, completed by 1512 subjects, 674 had celiac disease and 290 controls. We observed a higher (double) prevalence of tremor in celiac patients in comparison to healthy controls (28% vs 14%, P < 0.001). The frequency of a family history of tremor was higher in controls with tremor, but not in Celiac disease (CD) patients with tremor, suggesting that tremor in CD might be more frequent than controls and possibly related to the disease process itself and not due to essential tremor.

Celiac disease (CD) is a systemic autoimmune disease that mainly affects small intestine. Neurological features are not rare in CD and the physiopathology of the nervous system compromise is still controversial. However, it is believed that a cross antibodies reaction due to molecular mimicry occurs, mainly exerted by the celiac panel antibodies against the Purkinje cells in the cerebellum. With an overall frequency of 5%-36%, ataxia, myoclonus, chorea, peripheral neuropathy, headache and seizures are the most frequent neurological symptoms of CD[1,2]. Tremor was scarcely described[3,4] and its prevalence and clinical correlates were not established. Therefore, in this pilot study we aimed to prospectively evaluate tremor features in CD patients.

In a prospective way, an online inquest using the tremor scale Washington Heights-Inwood Genetic Study of Essential Tremor (WHIGET)[5] was published in the Argentinean Celiac Association website from June through July 2015. Subjects with CD that reported bowel biopsy confirmation of villous atrophy (Marsh score 3) were asked to complete the WHIGET scale. A case of tremor was considered when subjects rated one or more points. Demographic data, medications, CD antibodies and gluten-free diet (GFD) compliance were registered. Non-blood relatives served as age- and gender-matched controls. Individuals under 18 years or with known functional or structural bowel disorders were excluded. The local IRB approved the protocol and participants signed written informed consent in accordance to Helsinki Declaration principles. Descriptive data are shown as mean ± SE of the mean or proportions. χ2 test was used to compare categorical data and analysis of variance (ANOVA) was employed for numerical variables. 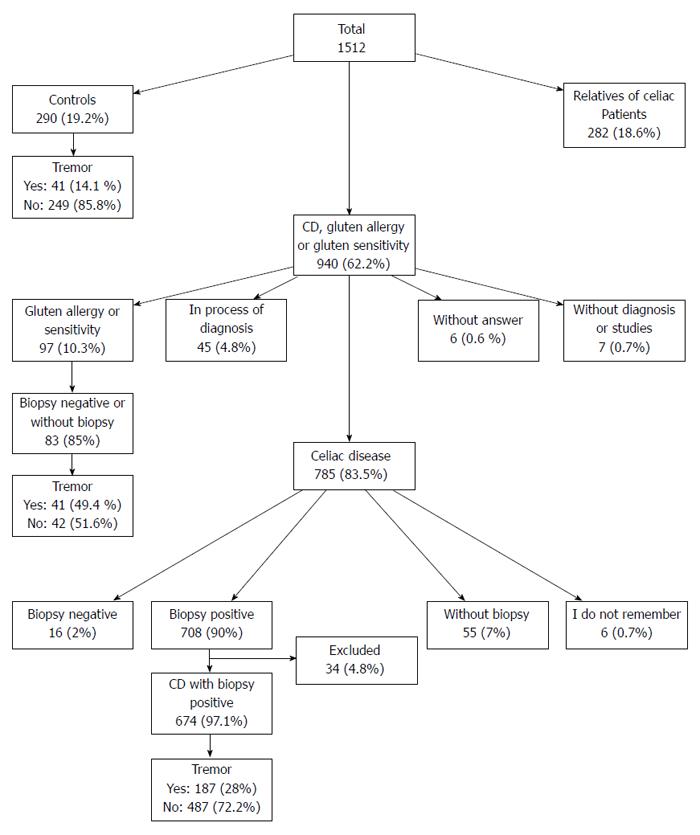 In a large sample, a double prevalence of tremor in the CD group was found compared to healthy individuals. We consider that tremor in CD might be possibly secondary to the disease process itself and not due to essential tremor as the frequency of a family history of tremor was lower in CD patients with tremor than in controls presenting with tremor. Tremor in CD was independent from demographics and CD characteristics, like disease duration, CD antibodies or GFD compliance. However, we might have failed to find any relationship between tremor and CD antibodies or GFD compliance, as symptoms may improve with gluten-free diet along with the disappearance of the CD-specific antibodies. Bürk and colleagues reported neurological features in a series of 72 patients with CD, of which 3% (2 patients) of them had intention tremor. Tremor features or its association with CD characteristics were not described[3]. Kheder et al[4] reported a patient with positive antigliadin antibodies and progressive ataxia and palatal tremor that obtained improvement in his symptoms after two years of GFD.

Limitations of this study include the absence of a physical examination of CD patients with tremor, the absence of IgA deficiency exclusion, and that possible vitamin E, vitamin B12 or Mg deficiencies due to malabsorption, that may cause tremor secondary to a sensory neuropathy was not ruled out. Finally, a population bias may have occurred as an online inquest may have included mostly young subjects with Internet access. Further confirmatory studies are required to confirm the exact frequency of tremor in CD and the associated clinical correlates.

We thank the Argentinean Celiac Association for all their collaboration.