Core tip: Hepatic epithelioid hemangioendothelioma (HEH) is a rare tumor of vascular endothelial origin. Spontaneous rupture of HEH is a life-threatening complication and very few cases have been reported. We report a case of HEH with spontaneous rupture. Transcatheter arterial embolization and exploratory laparotomy were performed, and subsequent immunohistochemical examination confirmed a diagnosis of HEH. The patient died 6 mo after surgery. We also reviewed the literature and described the diagnosis and treatment of this disease.

Hepatic epithelioid hemangioendothelioma (HEH) is a rare malignant tumor of vascular endothelial origin. Although it can occur at any age, the mean age was 41.7 years[1]. Spontaneous rupture of HEH is extremely rare and seldom reported. The exact cause of the tumor rupture is still unknown. Therefore, there is a lack of experience in the treatment of ruptured HEH. Here, we report a case of spontaneous rupture of HEH, which was treated with transcatheter arterial embolization (TAE) and exploratory laparotomy. The patient finally died at postoperative 6 mo.

A 44-year-old man was admitted to the outpatient department of our hospital because of a sudden hemoptysis on February 9, 2015. Chest and abdominal computer tomography (CT) scan showed multiple low-density intrahepatic nodules, and lesions growing adjacent to the hepatic capsule with a clear margin. The maximum lesion was located in the right lobe with a 75-mm diameter. Contrast-enhanced CT showed heterogeneous enhancement and stronger enhancement at the portal venous phase. In addition, there were multiple ground-glass nodules over the lungs (Figure 1). Based on the imaging findings, we considered a possibility of HEH and lung metastasis. The patient went home without any treatment. On February 20, 2015, he was sent to the emergency department of our hospital with the complaint of constant cutting-like pains over the right upper abdomen after eating, which radiated from the back to the right shoulder. On physical examination, his right upper abdomen was tender and slightly spastic, but without rebound tenderness, liver and spleen were not palpable, and there was pain with fist percussion over the liver. Laboratory examinations on admission revealed: white blood cell count of 12.01 × 109/L (normal range 4-10 × 109/L), hemoglobin (HB) 59 g/L (normal range 110-150 g/L), alanine aminotransferase 125 U/L (normal range 5-35 U/L), aspartate transaminase 189 U/L (normal range 5-40 U/L), prothrombin time 14.7 s (normal range 9.8-12.1 s), prothrombin-time ratio 1.26 (normal range 0.85-1.15), prothrombin-time activity 64% (normal range 70%-130%), international normalized ratio 1.26 (normal range 0.85-1.15), and plasma protamine paracoagulation test was positive. Serum tumor markers, carbohydrate antigen 12-5 (CA12-5) was 190.2 U/mL (normal range 0-35 U/mL), and α-fetoprotein (AFP), carcinoembryonic antigen (CEA) and carbohydrate antigen 19-9 (CA19-9) were all within normal ranges. Hepatitis B surface antigen was negative. Diagnostic abdominal puncture demonstrated active bleeding suspicious of tumor rupture. TAE was performed for the purpose of hemostasis. On March 5, 2015, the patient felt chest stufly, tachypnea and stomachache suddenly, the blood pressure was 91/55 mmHg, heart rate was 86 times/min, and HB was 61 g/L, and CT scan revealed massive hematocoelia suspicious of tumor rupture with massive hemorrhage. After consultation with surgeons, he underwent hepatobiliary surgery and an exploratory laparotomy was performed. Hematocoelia of about 5000 mL and multiple nodular tumors within the liver were found during operation. A tumor originated from the S8 of the liver adhering to the diaphragm, and active bleeding occurred from two peritumoral veins. Besides, a neoplasm (2.0 cm × 3.0 cm) was seen over the adhesive diaphragm. Finally, segmental resection of S8 tumors was performed, suturing was made to stop bleeding and diaphragm neoplasm was resected. The patient received 600mL fresh frozen plasma and 20 units of cryoprecipitate during the operation, and the hepatic portal was blocked for 20 min. Pathological diagnosis of the tumor over S8 was HEH based on the microscopy which showed that carcinoma cells with almost consistent size appeared nest-like or papillary around the blood vessels, and the nuclei were round or ovoid (Figure 2). The major part of the diaphragm neoplasm was blood clot, with a few blood vessels and striated muscle tissue. Immunohistochemistry showed that CD31 (+++) (Figure 3A), CD34 (+++) (Figure 3B), FVIII (Figure 3C), and Ki-67 (40%+) (Figure 3D) were positive in tumor cells. The patient died in 6 mo after surgery during the regular follow-up. 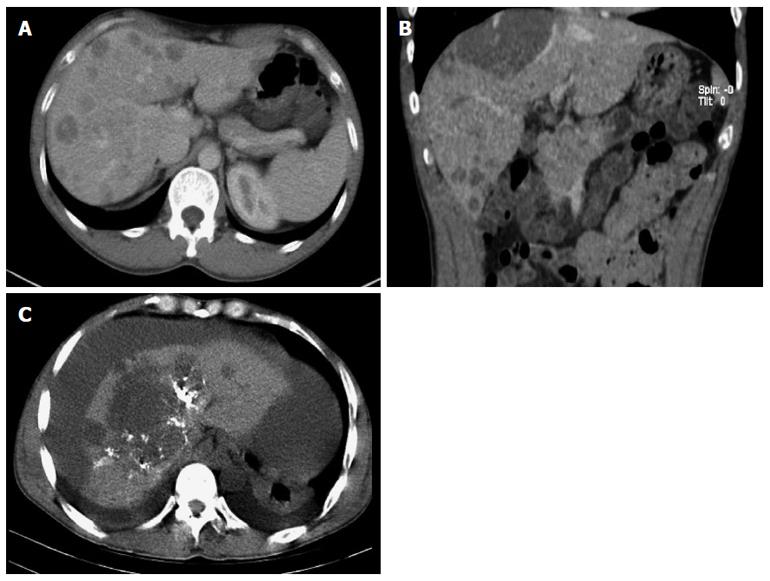 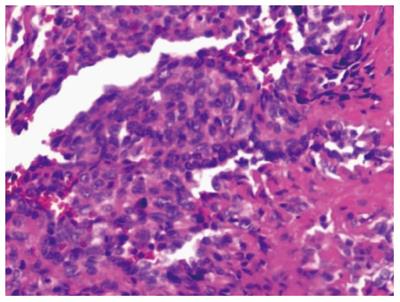 Figure 2 Histopathologic findings of hepatic epithelioid hemangioendothelioma. Carcinoma cells appeared nest-like or papillary around the blood vessels, the nuclei were round or ovoid (hematoxylin-eosin staining; magnification × 200). 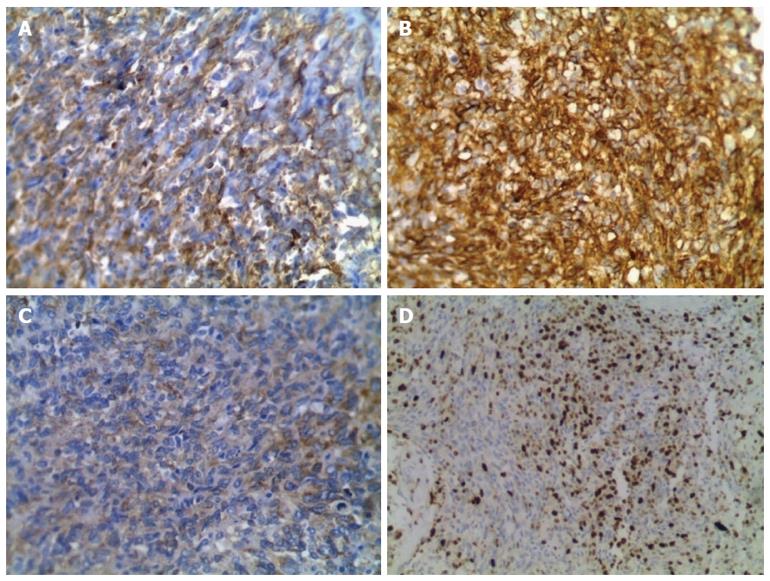 HEH is a rare low-grade malignant tumor with an incidence of < 1 per 1000000, and it was first reported by Ishak in 1984[2]. The tumor occurs in adults of all ages, averaging approximately 41.7 years, and the female: male ratio was 3:2[1]. . The etiology of HEH is unclear, possibly related to oral contraceptives and alcohol intake, and viral hepatitis[3]. The initial clinical presentation is non-specific (mostly right upper abdominal pain, hepatomegaly and weight loss), and some patients were discovered incidentally with no symptoms. When patients present with a sudden onset of abdominal pain, especially with hemorrhagic shock, we should be aware of tumor rupture. Few patients had jaundice and finally died of hepatic failure[4].

HEH has characteristic imaging findings. The tumors tend to have multiple nodules, distributing along the liver periphery and under the hepatic capsule[5]. In addition, these nodules may coalesce over time[5]. HEH was shown as hypoechoic lesions in ultrasound examination[3]. CT scans revealed multiple low-density intrahepatic nodules with some lesions in sight of calcification[3]. MRI showed inhomogenously hypointense lesions on T1WI, while inhomogenously hyperintense on T2WI[6]. Contrast-enhanced scans show peripheral ring-like enhancement at hepatic arterial phase and stronger enhancement at portal venous phase[7]. A “halo” and “capsular retraction” sign, as well as “lollipop” sign are characteristic findings of HEH in CT and MRI[6,8]. Angiographic examination can demonstrate the relationship between the tumor and blood vessels. In addition, abdominal tapping revealing blood in the peritoneal cavity is helpful in the diagnosis of tumor rupture. Imaging examination can help identify extrahepatic metastases, the common sites were lungs, peritoneum, lymph nodes and bones[1]. All these examinations can provide a clue to the preoperative diagnosis of HEH.

The confirmed diagnosis of HEH is based on pathological and immunohistochemical results. HEH usually had a pale or white cut surface, with necrosis and sclerosis in the central part[3]. Generally, the central and portal veins were invaded by the tumor[9]. Histologically, the tumor was composed of sheets of dendritic and epithelioid cells. Microscopically, tumor cells appeared spindle, irregular and epithelial, and accidental red cells were visible and accompanied by mucoid or fibrous stroma[10,11]. Intracytoplasmic lumina is the characteristic finding in pathological examination. Immunohistochemically, at least one endothelial marker (CD34, FVIII, CD31) was positive in HEH, while cytokeratin and alpha-fetoprotein immunocytochemistry was negative[3,12]. According to the statistics, positive rate of CD34 was 93.3%, FVIII was 90.0% and CD31 was 75.0%[3,12]. In the present case report, CD34, FVIII and CD31 were all positive.

Treatment modalities mainly depend on the patient’s individual situation. Hepatic resection is a good choice for located lesions and liver transplantation for multiple nodules. In the reported series, liver transplant resulted in an excellent prognosis in patients with HEH and it can be used for patients with extrahepatic metastasis as well[9,13]. Marino reported a projected 5-year survival rate of 76% after liver transplantation in five patients with metastatic involvement[9]. Some patients die from their HEH recurrence after liver transplantation, so clinical follow-up treatment is necessary. The common post-operative complications were perihepatic abscess, portal vein thrombosis and post-operative bleeding, which may result in a second operation[14]. In addition, TAE, chemotherapy, radiotherapy, hormone therapy and thermoablation are the treatment of choice for patients with metastasis. Mascarenhas reported a patient with a metastasis to the lungs who was successfully treated with oral thalidomide therapy[15]. The present patient was treated with TAE and exploratory laparotomy because of the rupturing of the tumor and abdominal hemorrhea.

Dietze et al[16] reported that 6 of 12 patients with HEH had liver failure, suggesting that it may be related to extensive involvement of both lobes. Although its growth may lead to hepatic failure, extrahepatic metastases and even death, its prognosis is considered better than that of other hepatic malignancies[11]. Tumor size, number of nodules and number of hepatic segments can influence prognosis. The survival rate for patients with a tumor > 10 cm in diameter was significantly lower than for patients with a tumor < 5 cm[14]. Prognosis of HEH was closely related to the choice of treatment. The 1-year and 5-year survival rates were 96% and 54.5% after liver transplantation, 73.3% and 30% after chemotherapy or radiotherapy, 100% and 75% after hepatic resection and were 39.3% and 4.5% without treatment[11]. Dong et al[17] investigated the implications of the pathological characteristics for the prognosis of HEH, and found that patients without cellular atypia and nuclear fission and with Ki-67 < 10% had a relatively good prognosis. Patients with spontaneous rupture of hepatic malignancies often have a poor prognosis, possibly due to the intraperitoneal metastasis after tumor rupture. HEH with spontaneous rupture is extremely rare. Our patient in the present report died in 6 months after surgery. The cause of death is unknown.

Spontaneous rupture of HEH is extremely rare. The exact mechanism is unclear. Generally, rupture of hepatic malignant tumors is often related to rapid expansion and central necrosis, tumor venous invasion, abdominal trauma and pressure of the diaphragm[18]. Spontaneous rupture of HEH in this report was evoked by eating, possibly due to the large size of the tumors and peripheral location. A typical symptom is the persistent pain over right upper abdomen with shock[19]. Diagnostic puncture is very important to confirm the bleeding caused by rupture of hepatic malignant tumors. The priority treatment for the rupture of HEH is hemostasis and saving lives. Other treatments, such as local liver resection or liver transplantation, should be chosen accordingly.

A 44-year-old man had a sudden onset of chest stufly, tachypnea and stomachache, and he had had hemoptysis and constant cutting-like pains over the right upper abdomen.

Chest and abdominal computer tomography scan showed multiple low-density intrahepatic nodules, the largest nodule being 75 mm in diameter in the S8 of the liver adhering to the diaphragm. In addition, there were multiple ground-glass nodules over the lungs.

Segmental resection of S8 tumors, suture for stopping bleeding and diaphragm neoplasm resection were performed for the purpose of hemostasis.

There have been very few reports about spontaneous rupture of HEH. The exact etiology of HEH is unknown and the mean age of the patients was 41.7 years. The exact cause of the tumor rupture is still unclear.

The authors are lacking of experience in the clinical diagnosis and treatment of ruptured HEH. However, saving life is always the priority treatment for the ruptured tumor.

It is a very interesting case, well written and detailed.